ROLLS-ROYCE has continued its thrust into younger, hipper territory by declaring its new Dawn, a Drophead “brother” for the Wraith, the sexiest car it has ever built.

While the company is fond of superlatives when describing itself, “sexy” is not a word it would usually throw around, at least partly because most of its customers are too old to even think about sex without needing medical attention.

The sleek and sporty Wraith was all about lowering the average age of Rolls buyers and the Dawn will have even greater appeal as the “most social” Roller ever, according to Gavin Hartley, Head of Bespoke Design for Rolls-Royce. “People expected a Wraith convertible, but 80 per cent of the panels are new and the new look sets it apart from its Wraith brother,” he told Wheels at the official unveiling in Goodwood, England.

“The monolithic front end of a Rolls is there but it’s much more sculpted, with a low, strong stance and a low windscreen with a steep rake to emphasise a sense of speed.

He’s not wrong. In the flesh the Dawn is a stunning vehicle and far better looking than the slightly heavy-butted Wraith. The timber decking - which features up to 60 layers of the timber of your choice, all taken from a single tree, and reinforced with aluminium - flows through a “waterfall” into the centre of the cabin and the inside of the doors and is stunning. Perhaps even sexy.

The Dawn also features the world’s quietest roof, according to Rolls-Royce, which can undertake what engineers dub its “silent ballet” in just 20 seconds at speeds of up to 50km/h.

Frank Ludwig, Director of Manufacturing, explained that getting the world’s second largest folding fabric roof (the Phantom, which needs to pull over to go roofless, is the largest) to operate at any speed was “a giant aerodynamic challenge”. “You can make your job really easy by just saying it has to be fast to get the roof up or down, but then you compromise on sound, or on vehicle design, so it was a real challenge because we tried to find the optimum of roof speed, sound insulation and of course design, which means not having any bulge at the back when it’s down,” he said.

“And we have measured the sound levels, it is definitely the quietest roof ever.”

Standing  just a few metres away from the Dawn, we turned around to find someone had put the roof up and we hadn’t heard a thing. So it really is impressive.

One of Rolls’ more bold claims is that the Dawn is a genuine four seater, rather than a two-plus-two: “In the world of Rolls-Royce, day to day mathematical norms don’t always apply. That’s why we say in the case of the new Rolls-Royce Dawn, 2+2 does not equal four,” goes the company line. 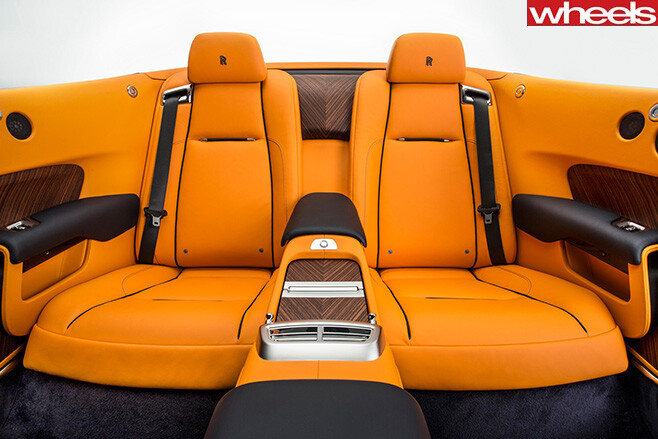 In truth, the rear seats, while not impinging on your knees, are not what sir would call ample.

“The legroom is the same as in Wraith, or very similar, but it is different to other convertibles,” says Ludwig. “So what we’re saying is that compared to the two plus twos, we have 400mm more leg space. It’s a big difference.”

The Dawn will be powered by the 6.6-litre turbocharged V12 from the Wraith, with 420kW and 780Nm, which should be enough to ripple the wind through your hair like a small hurricane. Deliveries will begin in the second quarter of 2016.