This Dodge Challenger GT concept is an American muscle coupe that thinks seriously about how best to put power to the ground.

Even Dodge understands that buyers may be perplexed by that prospect, stating in the first line of its press release, “It’s V8 muscle with all-wheel drive – yes, you read that right”.

The Challenger GT concept unveiled at the SEMA show sends all 336kW and 616Nm from its 5.7-litre naturally aspirated V8 engine through an eight-speed automatic transmission to all four wheels. It sounds way too sophisticated for such a big brute.

Dodge doesn’t detail how the all-wheel drive system works, and insists that it is indeed a concept only. Knowing the shared American-Australian love for burning rear rubber we can understand why, although it does get rather snowier Stateside than it does here. 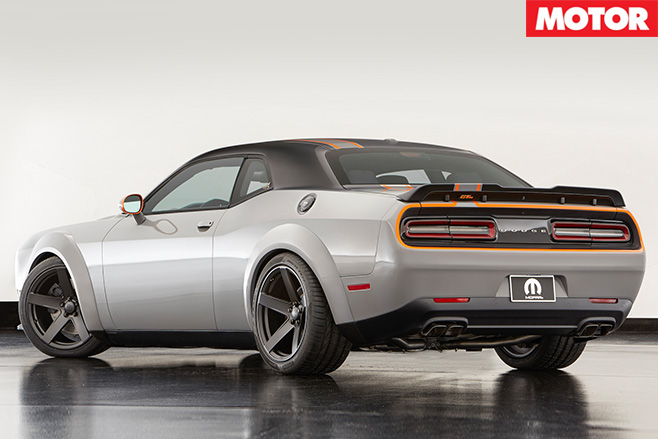 With 20-inch wheels and 255mm front/280mm rear tyres the Challenger GT AWD should get up and go without issue.

The Mopar-tuned coupe is marketed as, “A one-of-a-kind, year-round muscle car that lets you have your cake and eat it too, combining wickedly fast power and performance with the confidence of increased traction”.

Dodge is a struggling brand locally and we understand Fiat Chrysler Australia has thrown both hands firmly in the air to secure next-generation performance products if they are built in right-hand drive. This AWD concept may give clue to an expanded next-gen range even if the Challenger GT will continue to be LHD/RWD for now.