FRANKFURT will be awash with new metal, but few will be as significant or as keenly anticipated as the next-gen Renault Megane, sprung here in five-door hatchback guise.

Everything about the handsome hatchback you see here is a step-up from its ho-hum seven-year old ancestor, from its proportions to the attention to detail. Check out the seamlessly integrated grille, LED headlights, and far more classy tail-light treatments. As the elegant symmetry of the silhouette suggests, the Parisian sculptors are building on the X98 Clio IV’s successful visage. 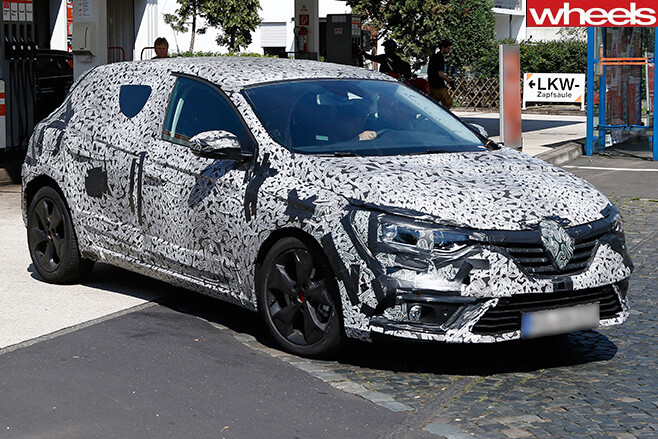 We hope the same level of design nous will be applied to the upcoming three-door coupe and wagon versions, which have singlehandedly saved the current X95 Renault Megane from ignominy.

It’s a revolution underneath too, with the X96 switching to a variation of the Renault-Nissan Alliance’s CMF1 modular transverse platform. That underpins a bewildering array of vehicles, including SUVs such as the latest Espace MPV/crossover and the Nissan Qashqai. Speculation on whether the latter connection also means a multi-link rear suspension system – at least in more powerful variants such as the RS – is keeping the rumour mill churning. With the existing torsion beam set-up serving the existing RS 275 so well, we’re not so sure Renault needs to, particularly as the beam also saves precious kilos.

Speaking of weight, the next Megane is thought to be upwards of 80kg lighter yet significantly stronger than before, thanks to an increase in aluminium and lightweight steels. Why? To improve efficiency and performance, of course.

To that end, reports are suggesting that the initial engine range will be spearheaded by a revised version of the Clio/Captur compact SUV’s 1.2-litre four-cylinder turbo petrol unit, thought to be known as the TCe 130, delivering around 90kW to the front wheels. Also certain (for Europe anyway) are dCi turbo-diesels in 1.5 and 1.6-litre varieties. However, we’re not certain what destiny holds for the money-spinning RS halo cars, with speculation suggesting a switch to a Nissan co-developed 1.8-litre unit to replace the fire-breathing 2.0-litre.

A peek inside shows a very Tesla Model S inspired tablet-style touchscreen display, integrated vertically within a centre console that looks like it is aeons ahead of the existing dashboard architecture for quality and layout – even in the test mule pictured.

Along with the usual array of multimedia connectivity features, it is evident from the prototype’s windscreen, grille and bumper that radar-guided driver-assist systems such as adaptive cruise control and Autonomous Emergency Braking are mooted for the new Megane. But the gain customers might appreciate most will be the uplift in interior space – at last addressing the French small car’s most glaring shortcoming against the Golf. Aided by an extended wheelbase, every dimension is said to have been stretched to make this the roomiest Renault ever in this class.

With one Renault spokesperson calling this car “vitally important”, count on the base model matching the low-$20,000 cost of the entry-level Golf and 3, but for the hotly awaited RS cars to punch past the $40K mark.

European sales are slated to begin late this year or early in 2016, with the Australian supply taps turning on sometime after July. That’s still a while away, but the wait should be worth it.