THE NEXT-GENERATION Mazda CX-9 has surfaced, undergoing final prototype testing in the US ahead of its debut at the Los Angeles Auto Show in November.

Due in Australia in the first half of next year, the new-from-the-ground-up SUV will be a seven-seat rival for the Toyota Kluger, Nissan Pathfinder, Ford Territory, Kia Sorrento, Hyundai Santa Fe, and Holden Captiva 7.

It adopts a stretched version of the current CX-5 medium SUV’s SkyActiv architecture and technologies, ushering in a much-needed fall in weight and a big lift in fuel efficiency. 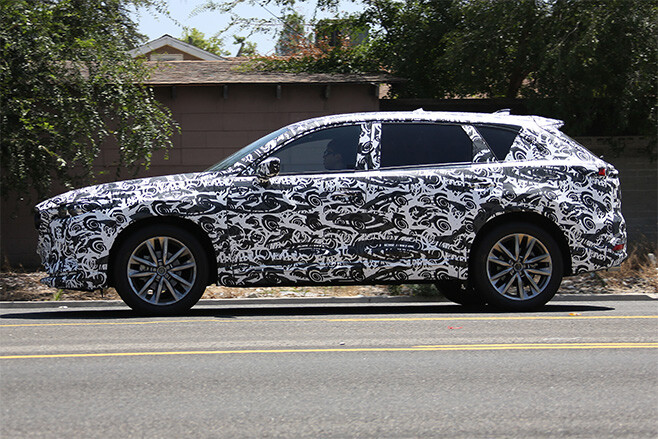 Probably the key difference from the existing seven-year old CX-9 is the junking of the heavy Ford-based 3.7-litre V6 petrol drivetrain, to make room for a promising 2.5-litre SkyActiv-G four-cylinder turbo engine - believed to be also slated for the still-secret Mazda 3 MPS hot-hatch scorcher.

Driving either the front wheels or all four via a six-speed torque converter automatic, it is said to improve performance as well as cut fuel consumption by some margin.

Whether a turbo-diesel is also part of the mechanical equation is not known, although the main market that this seven-seater will be pitched to – North America – prefers its crossovers to be petrol-powered. 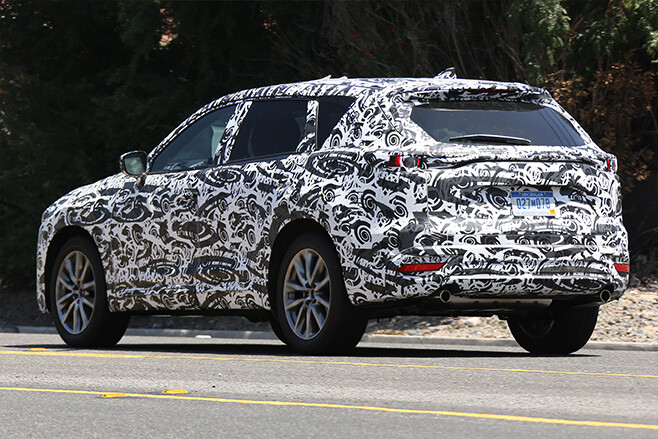 The new TC-series Mazda CX-9 remains true to the preceding version's overall size and shape, but it is easy to see the substantially more cab-backward profile, expressed through the elongated bonnet and more steeply raked A-pillars. Together with a more streamlined silhouette, the large SUV adheres faithfully to the brand’s Kodo design mantra of edgy sportiness, sharing several visual touchstones with the smaller CX-5 and CX-3 crossovers.

We also understand that interior space packaging steps up over today’s version, backed up by substantially better material quality and noise insulation. As before, production will be out of Japan.

2
The more cab-rearward styling of the new CX-9 contrasts sharply with the current version, above.

Today’s TB CX-9 starts from $43,770 for the front-drive Classic 2WD, stretching to the Grand Touring AWD’s price tag of $61,680. Don’t expect the largest Mazda to depart too far from these, despite a significant rise in standard spec, which should include a host of driver-assist technologies including Autonomous Emergency Braking.

Have spy pics of your own? We'd love to see them. Email them to wheels@bauertrader.com.au