The car that kicked off the VE Commodore’s reign as the most successful V8 Supercars generation is up for sale, with prototype chassis WR 001 hitting the market this week.

As the designation suggests, Walkinshaw Racing initially developed the prototype model in classic red-and-white Holden Racing Team (HRT) livery for testing that began at the end of 2006 just after the production VE Commodore’s launch.

According to the advertisement – posted on V8Sleuth.com.au – the ‘07’ stickered vehicle was Mark Skaife’s HRT 02 racecar driven in the first four opening rounds of the V8 Supercars championship in 2007. 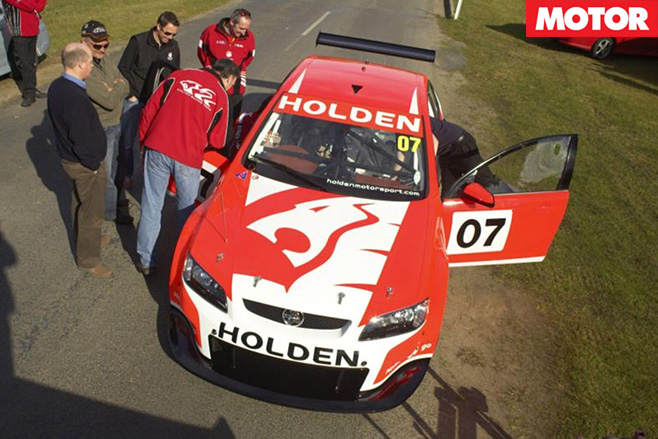 Skaife and Todd Kelly both assisted with aero testing for the vehicle, at Holden’s Lang Lang proving ground and in the searing heat of Woomera, South Australia. To conform to the control chassis, the VE body had to but shortened just behind the B-pillar – marked by a noticeable weld join on the roofline.

It was sold to D’Alberto Racing for the V8 Supercars season in 2008 and 2009 – and driver Tony D’Alberto still owns the car and has placed it for sale with a Price On Application (POA) sticker on its front window.

There is a catch, however. The VE racer does not currently conform to its original Series I specification and livery, and it does not contain an engine or gearbox. D’Alberto admits he was hoping to transform the vehicle back to its initial prototype design and look, and is willing to continue doing so for the buyers as part of a fixed purchase price.

Holden Motorsport previously released a behind-the-scenes video of this VE Commodore prototype in design and development more than a decade ago.