Which explains why for the 50th Jeep-worshipping event held in Utah, America, called the Easter Safari, that also coincides with the brand’s 75th anniversary, it went a little cuckoo and built a 527kW (707hp) Wrangler concept called the Trailcat.

Power comes from the same supercharged 6.2-litre Hemi V8 found in the Dodge Charger and Challenger Hellcat, which also produces 881Nm of twist and erupts a soundtrack that’ll send lycra-clad eco-mentalists up a tree for hiding. 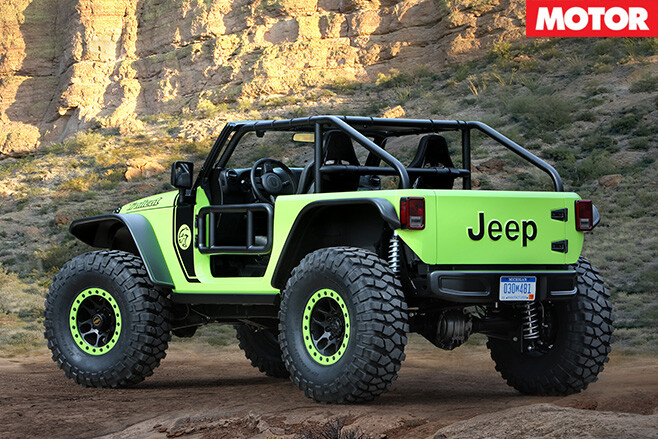 Jeep’s had to stretch the Wrangler’s chassis by 12-inches to accommodate the new engine and beefed up the driveline with Dana 60 axles front and rear.

Fox suspension is tasked with keeping things steady on rocks while 39.5-inch tyres on 17-inch wheels should help it clamber whatever it finds in its way.

Up top where you’ll be sitting the windshield’s been chopped two-inches, while bucket seats have been pinched from the Dodge Viper, matched to harnesses, to keep you in place during spirited rock crawling. Oh, and its doors are pretty much non-existent. 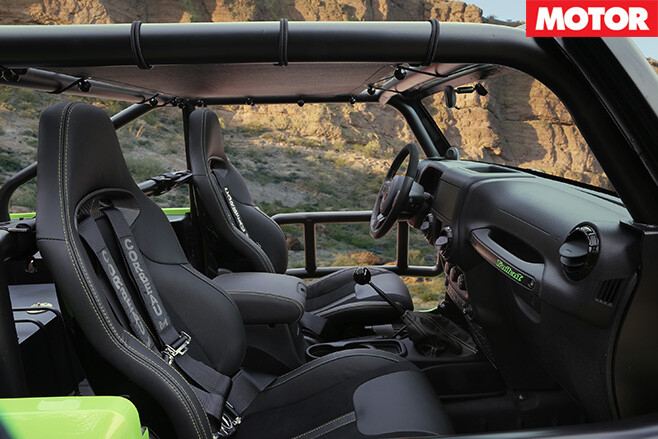 The Hellcat’s engine’s been married to a manual transmission, as the Trailcat scores a six-speed gearbox with a Hellcat ball shifter. Amongst the other concept-specific details there’s a domed and vented hood, LED headlights, foglights, Satin Black grille, and a two-inch lift to its ride height.

Of course, Jeep didn’t limit itself to one concept for the fan festival. It also brought along six others, including a military-service inspired dual-cab Wrangler called the Crew Chief 715, a 12-inch shorter Wrangler named the Shortcut, and even a Renegade ute/pick-up.

But the Trailcat, resplendent in its radiation bright green, is certainly the highlight of the cars. Have a listen to the thing and you’ll instantly get what we mean.