Ford has re-nosed its compact Focus and revised its ride and steering, while extending turbo power to every car in the line-up. So where has this facelift left the model’s renowned dynamics?

Ford has re-nosed its compact Focus and revised its ride and steering, while extending turbo power to every car in the line-up. So where has this facelift left the model’s renowned dynamics?

WHAT IS IT?
The Ford answer to the Golf, Corolla and Mazda 3. The Focus is a dynamics leader and the top-selling Ford globally. It’s absolutely crucial for Ford regaining its sales strength in Australia.

WHY WE’RE DRIVING IT
Ford has given the current-gen Focus, which was introduced here in 2011, a mid-life facelift and cabin clean-up. The range has been streamlined to fewer models, and one engine has been given huge price cuts across the range.

MAIN RIVALS
An armada of cars competes with the Focus hatch and sedan. The Toyota Corolla, Mazda 3, Hyundai i30, Holden Cruze hatch, Volkswagen Golf, Honda Civic, Peugeot 308, Renault Megane, Nissan Pulsar and countless others are fighting for buyers in the same segment. 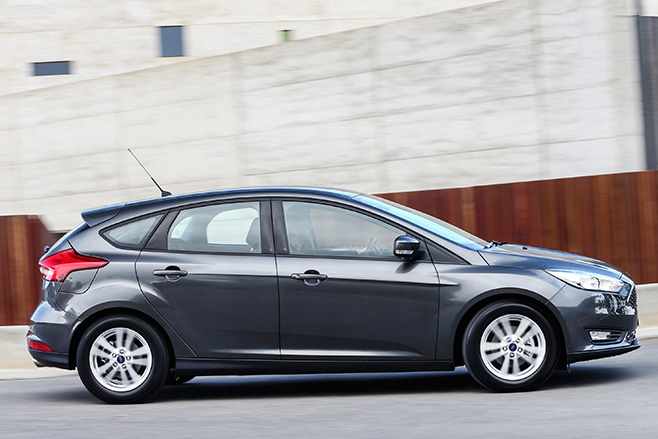 THE WHEELS VERDICT
Always close to the top of the C-segment when it comes to the driving experience, the Focus now brings much better value for money to the party, as well as improved manners that make it more liveable and more broadly appealing. And it’s still near the top in terms of dynamics, even if it has lost just a little sparkle from the driver’s seat.

THE WHEELS REVIEW
WE FIND ourselves frequently saying that Ford Australia has some brilliant products but doesn’t seem to have the marketing and sales force to shift its metal from showrooms.

So here’s hoping that this mid-life update for the Ford Focus (designated LZ) has given the people tasked with selling it renewed vigour. Because the changes make this a seriously accomplished and desirable hatch, with more punch, better economy and improved manners. 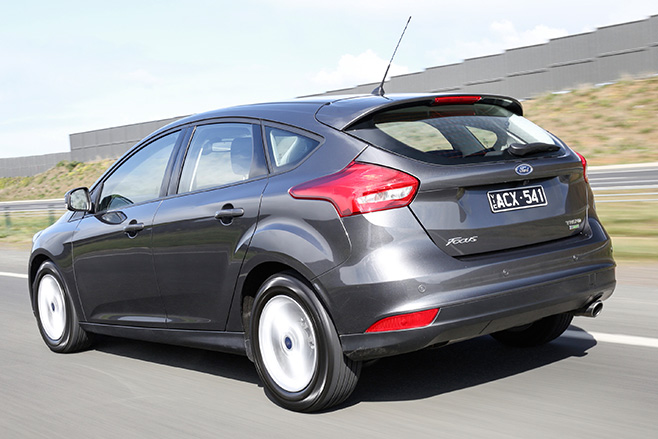 The Focus is one of the last Fords to be given the sanitised corporate nose, with that trapezoidal grille we’ve already seen on Fiesta, Territory and the recently arrived Mondeo. There are new bumpers front and rear, and a revised tailgate and rear lights, too. It may be less distinctive, but it’s a much more cohesive look than, say, on the FGX Falcon.

The Focus line-up has been streamlined, with the entry-level Ambiente dumped (no-one was buying it), and one engine offered across the entire line-up (apart from flagship ST and forthcoming Focus RS, of course). That means all three trim levels, starting with the Trend, then Sport and Titanium, come with the same 1.5-litre turbocharged four-cylinder Ecoboost engine. It replaces the 125kW/202Nm 2.0-litre, and delivers 132kW/240Nm with better fuel economy. That’s now 6.2/100km, and 6.6L/100km for auto models, thanks partly to the idle-stop in its eco-arsenal.

The shake-up also means the troublesome dual-clutch transmission has been dumped in favour of a smoother, quieter, conventional automatic, while a six-speed manual is also offered. And the diesel Focus is no more – it had made up a paltry 3 percent of the car’s sales here. 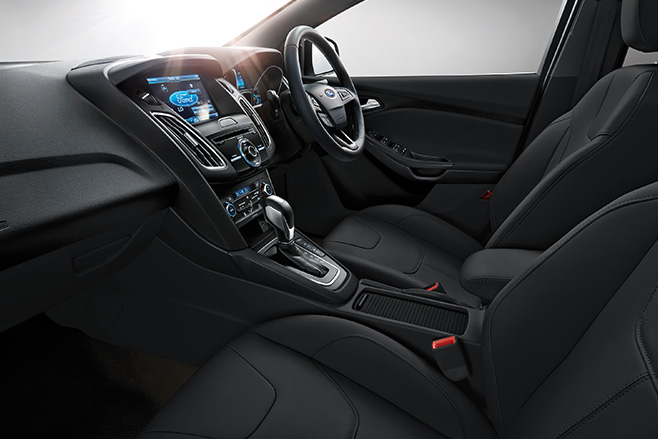 Inside is where you’ll spend your time, and that’s where the years have been stripped off. The centre console and dash has seen a litany of buttons smoothed over for a much cleaner, smarter look. There are paddle-shifts optional for the first time, and with the switch-fest gone there are better surface finishes and textures that elevate this car much closer to its original target, the VW Golf.

Changed too is the driving experience, with the goal of making this car – whose previous generations were dynamics benchmarks – more comfortable and refined. Tweaks include additional sound insulation and thicker front window glass, for instance, as well as plusher carpet for greater sound deadening. The changes have worked: the Focus cabin is now more refined, albeit let down marginally by road noise and some buffeting from the side mirrors, which have been reshaped for better aero.

That new engine is quiet at slow speeds, but give it a prod and it’s a tad coarse, with a note that’s more gruff than buff. Teamed with the new automatic, which shifts smoothly but has mapping that can’t quite keep up with throttle inputs, it is an adequate rather than rousing drivetrain, with the priority obviously around-town improvement.

That’s where the Focus benefits from a litany of safety and tech features – including auto emergency braking, lane keep assist, and perpendicular auto-parking – as well as the new tune for its electric steering. The steering feels too light at first, but it’s intended to feel lighter around town, with less resistance, and that’s exactly the result. There’s excellent feedback at greater speed, though, and while the fact that it’s not linear may seem odd at first, needing a few bites on tighter corners, the Focus is planted and sure on long, fast sweepers. 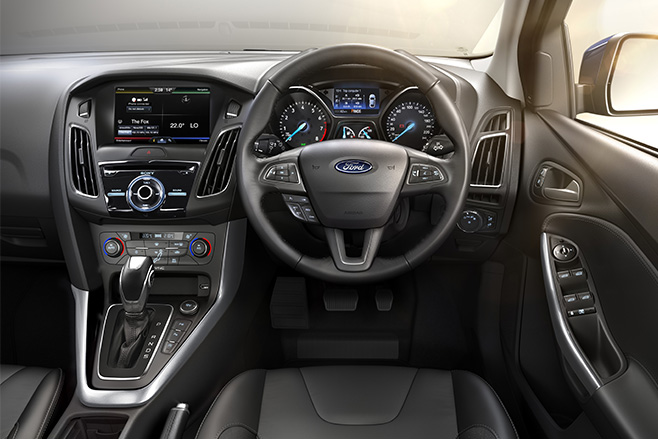 The ride is firm across all models, with the Trend running 16-inch alloys among a swathe of standard gear that includes sat-nav and Ford’s excellent SYNC 2 connectivity. The Trend soaks up bumps well, even the man-sized pot-holes on your local council’s to-do list. Upgrade to the Sport on its 17s, and the ride is still firm yet compliant with excellent composure. However, as with the previous model, the 18-inch wheels on the Titanium let this car down. The ride here is clunky and intrusive, despite the excellent road holding, grip levels and overall balance.

That ride comes courtesy of revised bushings front and rear, and dampers that now have an adjustment valve that means engineers have had greater scope for tuning. On the downside, the Titanic-like turning circle remains for larger-wheeled models, with the same steering tune across the range.

The $23,390 starting price for the Trend is a substantial $3K more than the previous starting point, but there’s far more gear for the outlay, with Ford chasing private buyers rather than relying on slash-and-burn fleet deals. Overall, Focus has had the edges of its dynamic ability planed off ever-so-slightly, but it can still offer a compelling drive down a ragged road and manage the supermarket sweep with ease.

Click here to read the full range review of the Ford Focus.