First published in the October 2015 issue of Wheels magazine, Australia’s most experienced and most trusted car magazine since 1953.

THE ironic thing is that I would laugh at someone who ignored a warning light on their dash and kept driving right off the face of the planet as a damn fool.

History is awash with stories of people, some of them women, who kept pootling about in their cars despite a red oil light warning of impending thermo car-killer disaster, and yet when an icon flashed up on the dash of my Subaru Forester I was more bemused than befuddled.

Much as I’m loath to admit it, my refusal to engage with instruction manuals of any kind (I figure industrial designers are paid a fortune to make such things effectively redundant, because they understand that only a small percentage of people will read them) can be problematic.

In my defence, warning lights are generally self-explanatory, but this one looked like the symbol you might find in a European bathroom explaining what a bidet does, only laid on its side. Or perhaps one of those emoticons that lazy, illiterate people love.

Admitting that I was beaten, the manual told me that this was the Diesel Particulate Filter Warning Light, which warns you when the filter is not able to burn the soot and particulate matter that has accumulated and the built-up crud exceeds a specific limit. 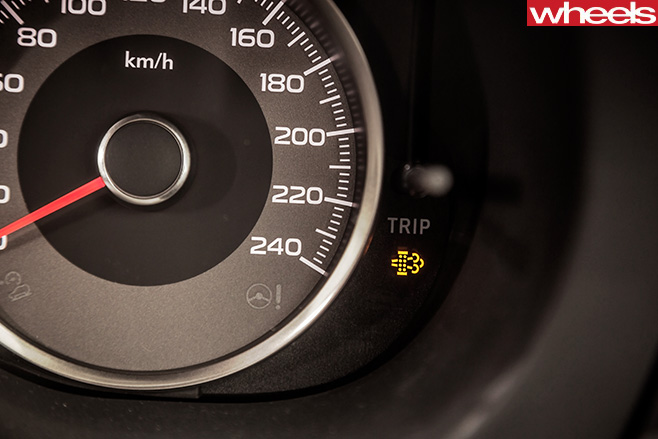 Because my wife was reading this to me, and I may have been shouting at her, we might have missed the distinction between the light being on (continue to drive carefully, drive at certain revs for 15 minutes for burn treatment) and the light flashing (go directly to your Subaru dealer).

To cut a slightly embarrassing story short, the dealer advised that it was merely

“a precautionary oil dilution warning light, which can come on sometimes if diesel cars have been used on a lot of short journeys”.

This would make sense because the Forester does do a lot of short journeys (I didn’t realise this was a potential problem) except that when it came on I’d just returned from a 2000km trip down the coast, during which I thoroughly enjoyed the car, its utility and its fuel economy in particular.

The only bummer with the diesel (before this whole palaver) is the agricultural tone, which still bothered me when climbing a winding mountain road, but for 80 percent of a long journey it’s quiet enough that you forget about it.

To be honest, I still can’t decide whether I’d buy the diesel or petrol Forester, although I seriously would consider one of them as a family car if I wasn’t such a prima donna, but the value equation with this diesel is tipping me in its direction.

WHAT is it about Foresters and vomit? I’d just flown up the Clyde Mountain out of Batemans Bay and on reaching the end of the hairpins was congratulating myself on having kids who can cope with enthusiastic cornering. Then my four-year-old daughter said she felt sick and I, like a fool, just advised her to drink some water. Seconds later half a punnet of strawberries had expelled from her throat. I still feel sick just thinking about wiping it up. So it’s 1-all for vomit between the petrol and diesel versions.