AUSTRALIA’S best-selling car – in Corolla hatchback guise at least – has undergone a raft of improvements designed to keep the hard-charging Mazda 3 and Hyundai i30 at bay. The changes aren’t massive, but they certainly lift the Toyota’s appeal.

WHAT IS IT
The Toyota Corolla is not only Australia’s most popular car, it’s also one of the longest continuing nameplates. The Japanese-made five-door Corolla hatch – which is almost 1.5 years older than the larger, Thai-built sedan – arrives in four grades, each powered by a 103kW, 1.8-litre four-cylinder petrol engine.

WHY WE'RE TESTING IT
The small-car class is one of the largest, and with big names like the Mazda 3 and Volkswagen Golf, it’s also extremely cutthroat. Of course, fleet sales help keep the Corolla at number one, but that doesn’t mean it can fall too far behind. That’s why this E180 Series II makeover is so important. Has Toyota done enough? THE WHEELS VERDICT
As a C-segment hatchback proposition, the latest Corolla is neither haute couture nor fast food, falling somewhere between in terms of space, performance, economy, dynamics, refinement, comfort, practicality, and value. In fact, Australia’s bestseller does very little wrong. Where it does shine brightest is in resale value, reliability, low-cost servicing, dependability, and the convenience of Toyota’s massive dealership network. These more than any other factors have built and sustained Corolla’s reputation over 48 years. If you desire something more than comfort food, however…

THE WHEELS REVIEW
FACT: in all of its 11 forms over 48 years, there has never been a bad Corolla. While at worst, several have been dull, or sluggish, or cramped (and occasionally all at once – hello KE55 auto), they’re always dependable. However, more dynamically rounded and refined rivals such as the Volkswagen Golf and Mazda 3 have long been tastier. Alongside these, the Toyota seems more workaday healthy takeaway than weekend gourmet lunch. And that was always OK when the Toyota was priced accordingly, but nowadays even that gap is negligible.

The (unchanged) 103kW 1.8-litre twin-cam unit is surprisingly effective around town, bringing eager yet conspicuously smooth off-the-line acceleration, backed up by strong on-the-go responses, with the flaring normally associated with continuously variable-ratio trannies thankfully contained. It’s easy to understand why many Corolla sales are sealed after a brief test drive. 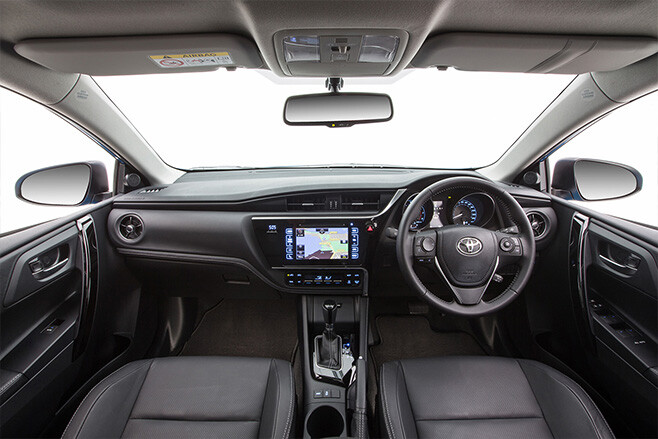 But, when extended, that 2ZR-FE engine defaults to its old loud and strained ways. The ZR’s ride takes a turn for the worse over bumpier roads, and tyre roar over coarse bitumen can obliterate the peace. A Golf or latest Peugeot 308 seems miles quieter and more refined.

That’s why the pick of the range is probably the $20,790 Ascent Sport, since it packs sufficient kit without the Orwellian fleet-car ambience of the only-$1K-cheaper Ascent opener. That kit includes seven airbags, cruise, fog lights, voice control, leather wheel, privacy glass, alloys, and a far nicer touchscreen interface than before with – somewhat tinny – Bluetooth phone and audio streaming.

So that’s the state of play for Australia’s bestselling car. Sharper to look at, sit inside and drive (though too much so over rougher roads), the middle-of-the-pack Corolla is now treading water more effectively than ever.

Click here to read the full range review of the Toyota Corolla.