WHAT IS IT?
One of our favourite supercars, redone. This new R8 mightn’t look that different, but under that slightly sharper and more angular body sits a lighter and stiffer chassis infused with carbonfibre. There’s a new tech-heavy interior, too, and extra electronics in the chassis to boost the sense of fun and speed. What hasn’t changed is the R8’s cylinder count, with Audi’s superb 5.2-litre V10 nestled behind the cockpit.

WHY ARE WE DRIVING IT?
Because if the original R8 was good, this new car promises to be even better thanks to less weight, retuned electronics, a V10 soundtrack from the gods and even more power. That makes it a helluva mouth-watering prospect. This is also our first opportunity to sample the R8 in right-hand-drive on Aussie roads, and to spend some serious seat time in the ‘baby’ R8, the entry-level 397kW V10. 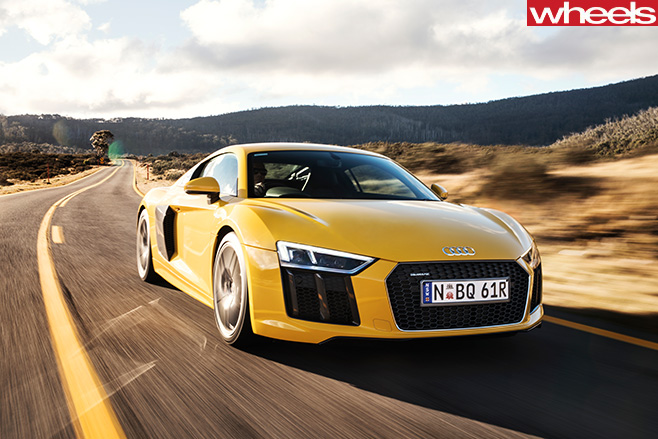 THE WHEELS VERDICT
Brilliant from nose to tail. New R8 is usable, friendly, beautifully built and easy to drive, yet still mind-alteringly fast and exciting. And did we mention that magical V10? It remains one of great modern supercar engines, especially in more potent V10 Plus guise.

PLUS: That epic V10; the noise; chassis balance; easy to drive; raw and exciting
MINUS: Styling changes perhaps too subtle; interior not OTT enough for some; plastic gearshift paddles feel cheap 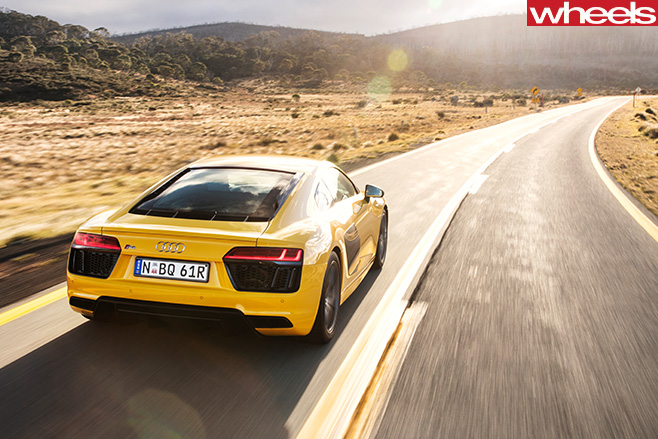 There are other differences, too. Like softer suspension with Audi’s magnetic dampers (the Plus uses a stiffer fixed set-up with larger sway bars), different gear ratios, no carbon-ceramic brakes, and subtler design cues (sans the Plus’s fixed carbonfibre rear wing).

So does all this mean the regular V10 feels limp-wristed and mealy mouthed, compared to the razor-sharp violence of its more expensive sibling? 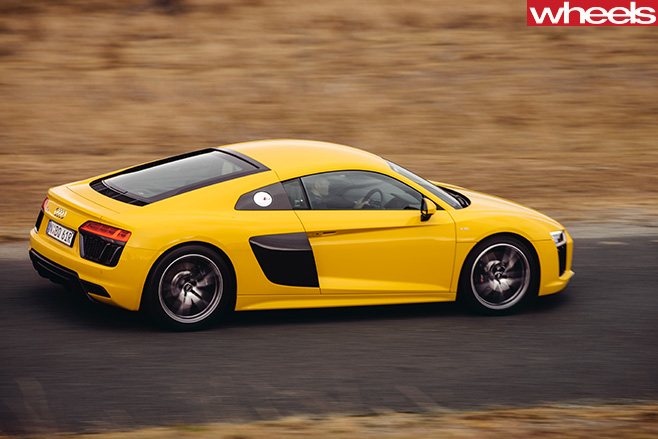 Absolutely not. This remains a rabidly fast supercar, and one dominated by that magical, mid-mounted V10. It’s pin-sharp, soulful, eager to rev and at full-noise feels like it’s hardwired to your spine. It’s a masterpiece.

It doesn’t hone in on its lofty 8700rpm redline with the same ball-tearing fury as the Plus, or have the mid-range punch we’re so used to in this age of turbocharging, but it remains one of the great modern supercar engines.

The chassis is up to the job, too. Like the Plus, the regular V10 rides on a structure that’s lighter and 40 percent stiffer than before, thanks to a blend of aluminium and carbonfibre. The wheelbase and most of the dimensions remain the same, bar width, which has grown by 40mm.

All of the handling traits that made the old R8 so great remain – the inherent sense of balance and approachable limits – but this new version is so much sharper and lighter on its feet. 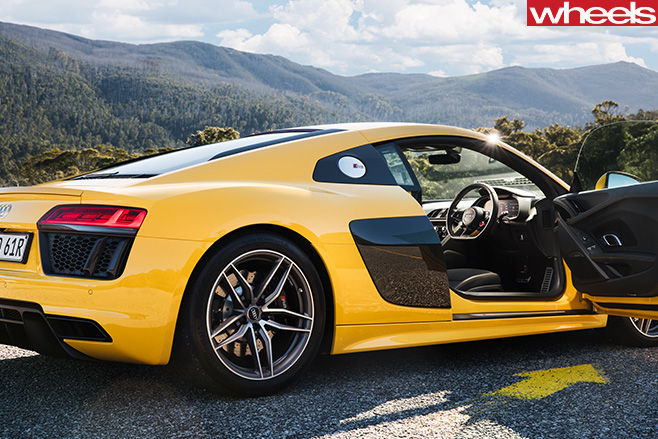 Dial the electronics into Dynamic (one of four chassis modes) and turn-in is crisp, the steering nicely weighted, and on corner exit you can feel the updated quattro system shuffling grunt to the rear axle to deliver tiny but delicious degrees of slip.

Push really hard and it will understeer, but it’s so gentle and progressive that the limits are well telegraphed.

At 1610kg, the regular R8 is 60kg heavier than the carbonfibre-festooned Plus, though you’d be hard-pressed to notice the extra heft on the road.

What is noticeable is the more subdued soundtrack. Both versions are fitted with the optional sports exhaust as standard in Australia, but the Plus scores an extra exhaust button on the steering wheel that turns the V10’s howl up to 11. 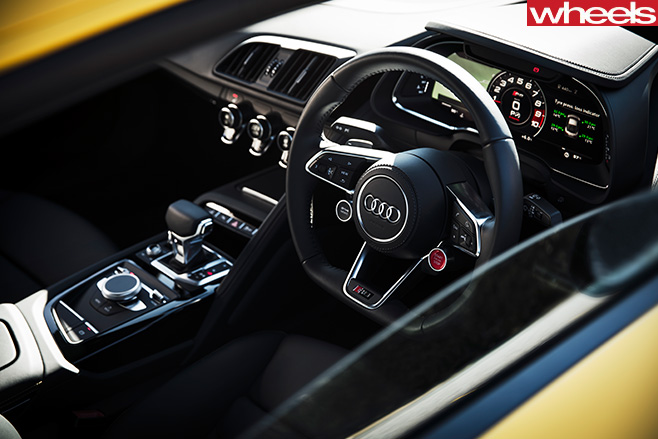 The V10’s cabin also lacks the carbonfibre detailing and sportier bucket seats you get in the Plus, though both interiors are exquisitely made. The design is clean, driver-focused and futuristic thanks to Audi’s brilliant Virtual Cockpit display.

The only real letdown is the gearshift paddles. Where other supercars use paddles beautifully hewn from aluminium, the R8’s are small, plastic and feel cheap.

Then there’s the question of value. The Plus’s extra power, carbonfibre body kit and carbon brakes (which are worth almost $20K alone) more than justify its higher price.

The extra volume of that howling V10 soundtrack is also worth the extra outlay, let alone the step-change the more powerful R8 delivers above 6500rpm as it rushes to its lofty 8700rpm limiter.

It shouldn’t surprise, then, that Audi expects 80 percent of buyers to opt for the Plus. If, however, you’d prefer to spend the extra $35K elsewhere, the ‘entry level’ R8 is so exciting, so friendly and so usable that you won’t be disappointed. On public roads, it’s all the supercar you’ll ever need.