WHAT IS IT?
The Audi R8 is a mid-engined supercar flagship for the Audi brand. It’s also the basis of Audi’s R8 GT3 racing program, which has won numerous endurance races around the world, including the Nurburgring 24hr and the Bathurst 12hr.

WHY WE'RE TESTING IT
Audi freighted 15 left-hand-drive R8s to Australia for media and customer drives ahead of the production model’s May arrival. We drove it at Bathurst last week, this week we’re attacking Sydney Motorsport Park. 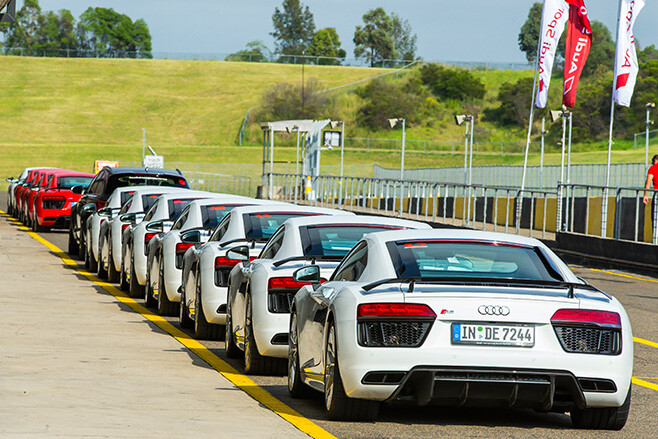 THE WHEELS VERDICT
If you’re in the market for a $400K everyday supercar, the Audi R8 has to be on your shopping list. It’s one of the few that’ll keep you comfortable around town and blow your expectations away at a racetrack.

THE WHEELS REVIEW
All is not right with the world when a mere freelance writer gets the plum Audi R8 Bathurst launch drive and the editor joins the mop-up mob a week later for some trivial point-n-squirt disciplines in industrial Eastern Creek.

This time last week Michael Stahl was topping 265km/h in left-hand drive versions of the second-generation Audi R8 supercar down Conrod straight, using every ounce of his - and the car’s - considerable skills to keep pace-setter and V8 Supercar driver Steven Johnson in sight.

I get to prod the accelerator for three point seven seconds. It should be even less time. It should, in fact, be just 3.2 seconds - Audi’s claim for the 449kW R8 V10 Plus to hit 100km/h from rest. The extra half second today comes courtesy of 35C heat at Sydney MotorSport Park, the fact that the car has been idling and heatsoaking between runs, and the other fact that those runs are happening on the slight uphill straight between turns one and two, with two people on board.

I suppose I should be grateful for that extra half second, because it means an extra half second inside the Audi R8’s new interior, with its air conditioning keeping the ridiculous Sydney heat and humidity at bay. Audi calls it a monoposto layout - everything sounds better in Italian, right? It translates as ‘one place’, which in car terms means single-seater. In the R8 it means driver focused. Everything about the interior has been designed and situated to make the driver the centre of attention, which makes sense partly because this is a high performance sports car, but also because the driver is probably the person who shelled out $389,400 to buy the new R8 V10 Plus. That’s a saving of $18,410 on the previous model, despite the generational improvements.

During my 3.7 seconds with the car, I can confirm the accelerator works well, the V10 engine roars like a bull, and the headrest hurts when it hits your head hard as the R8’s all-wheel drivetrain turns fuel into a force almost as relentless as gravity.

Here’s an interesting fact, and we heartily recommend that you not try this at home. Were one to drop an Audi R8 - or any object - off a tall building, it would accelerate to 100km/h in 2.8 seconds, if you discounted air resistance. When launched down a long, straight, flat piece of road from a standstill, the 1630kg R8 can hit 100km/h in 3.2 seconds, including overcoming air resistance. A falling object will continue accelerating until it reaches terminal velocity - the point at which gravity’s pull no longer overcomes air resistance. For a skydiver this is around 195km/h.

The Audi R8, when used in the manner for which Audi’s engineers intended, has the power and torque to overcome air resistance for much longer. It’ll hit 200km/h in just 9.9 seconds, and go on to a top speed of 330km/h.

If you drop the Audi R8 from a tall building, you’ll only experience that accelerative rush once before the car’s extensive and expensive carbonfibre and aluminium structure is destroyed on impact. If you use a racetrack instead, you’ll get to experience it as many times as you want. Trust me, I know.

It’s also $35K less than the Plus, partly because it doesn’t get carbon ceramic brakes (a $20,400 option), a dedicated performance suspension tune, or carbon fibre detailing inside and out. Both V10 models utilise the same updated quattro all-wheel drive system, which can send 100 percent of the drive to either axle as needed, and a new seven-speed, twin-clutch automatic transmission. There is no manual option.

The previous generation’s V8 option has not been replaced - yet. Audi will surely add a sub-$300K R8 to the range, though it remains to be seen whether it will have a 4.2-litre V8 engine or something entirely different.

My second ‘experiential’ discipline for the day isn’t exactly strafing from The Cutting to McPhillamy Pass, but the new ‘Amaroo’ South Circuit - a 1.8km loop around Corporate Hill - does at least require steering input. Many steering inputs, along with considerable and judicious use of accelerator and brake.

My pace-setter isn’t Steven Johnson, but the bloke leading us around isn’t exactly hanging around. It’s all I can do to stay smooth and fast and keep up, making the most of the 5.2-litre V10 engine’s 8700rpm redline to blast between the bends, and stomping on the standard carbon ceramic brakes to catch up a metre or two before he escapes up the next straight.

With the R8’s adjustable sports suspension in Dynamic mode, the mid-engined supercar shows how wonderfully suited it is for this kind of workout. It feels light and agile… sharp too. 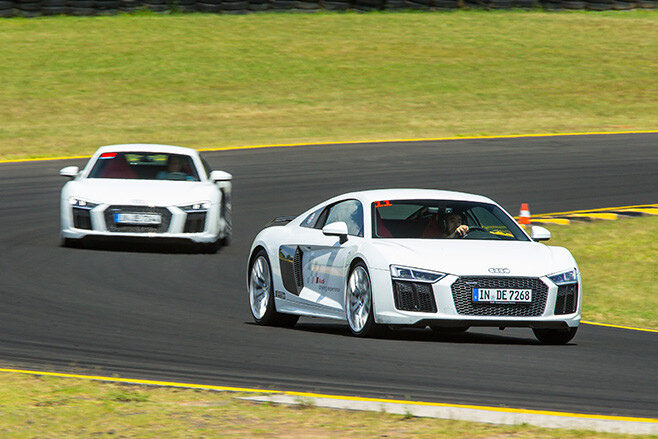 And loud. Really bloody fantastically unexpectedly raucously wonderfully loud. Good on you Audi for maximising the potential range of a bi-modal exhaust. Loud enough to wake the neighbours, soft enough to sneak home at night.

The R8 slips and slides a little, which I put down to hot tyres in clumsy hands on a hot track on a hot day - and the slips only come when seriously quick escalates into stupidly quick. But they’re predictable and progressive, and the ESC does a seamless job curbing my (over)enthusiasm.

The third, and final, discipline for the day will take that slipping and sliding to the extreme. It’s a witches’ hat motorkhana on a big wet concrete skidpan. I’m not sure what it’s meant to prove about the R8. Nor will it match the adrenaline rush of laying down a hot lap of the Bathurst mountain course (not bitter at all, Stahly). But it is a chance to have some serious low to middling-speed fun in a fantastic sports car, and with no consequences beyond ending a cone’s life prematurely. For that I’m very grateful.

Unexpectedly, it does educate me on the subtle differences between the modes of the R8’s ESC chassis control system. Its Performance mode has three sub-settings for dry, wet and snow. Not sure about snow mode (35deg day, remember), but wet mode really lets me play with the R8’s rear end on the throttle and under brakes. It also does a lot to convince me the Audi R8 is not an intimidating car.

This ‘accessible supercar’ character was an important element of the first generation R8, and Audi’s step-change has not diluted that at all. Instead, Audi has created a faster, more capable, more exciting and even more confidence-inspiring supercar.

Right. Which way to Bathurst?