Few cars generate more discussion in the MOTOR office than the latest M3 and M4.

We’ve driven both a few times over the past two years and every time come away impressed with their capabilities, but ultimately disappointed with how difficult it can be to exploit them.

On the face of it, a swathe of cosmetic enhancements and a shoutier exhaust should do little to alter this, however the M4 ‘M Performance’ does alter the car’s character enough to give pause for thought and the feeling that perhaps a fresh outlook is needed. More on that later, but first a look at the M Performance bits fitted to this car. Being the demonstrator, it has more or less the works, including $6316 of exterior bits, another $2144 of interior adornments and $9350 worth of carbon-tipped titanium exhaust for a grand total of $167,610. Not cheap, though not as painful as it could be since BMW slashed $16K from the M4’s price tag in mid-2016.

The exterior mods seemed to be an acquired taste. I loved them, the bodykit giving the M4’s steroidal stance even more aggression and the stripes adding some ’70s M-car cool. Some found it garish, but I couldn’t walk away from it without stealing a backwards glance. That exhaust also enhances the M4’s appeal, giving the 3.0-litre twin-turbo six some much-needed vocal character. In stock form, even with stereo enhancement, the S55 sounds coarse and flat, but the titanium pipes imbue it with some of the E46 M3’s signature straight-six rasp.

It probably liberates a little extra power, too, but to be honest that’s not something the M4 is lacking. The spec sheet says 317kW/550Nm, but it feels much, much stronger than that, with enough torque to have the rear end squirming in the first four gears on cold tyres. 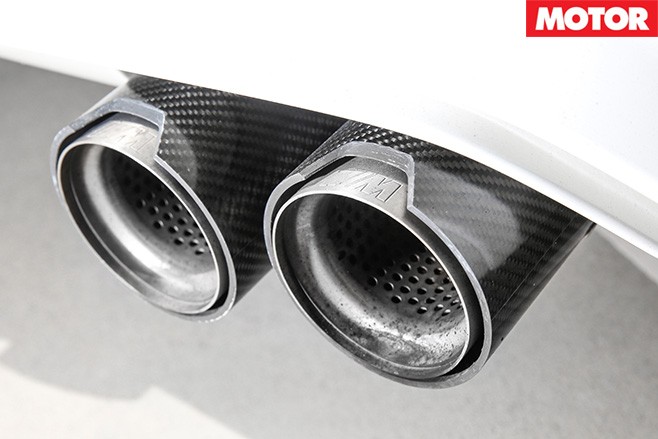 The M4 is extremely dependent on tyre temperature. On a dry, warm road the traction and grip it musters is simply staggering, but on cold rubber it can be a handful, the rear unable to keep up with the super sharp front and damping that has the car pogo-ing over bumps.

Combine this behaviour with enormous amounts of turbo torque and the experience can leave you feeling a bit frazzled. It’s a marked departure from previous M cars, which have traditionally been friendly and exploitable at the limit. This partly explains our disappointment with the current crop, however, viewed another way, attempting to tame them is undoubtedly thrilling. Hopefully the new M3 and M4 Competition incorporate the added attitude of this M Performance-enhanced car while taming the standard cars’ excesses with revised suspension and differential settings.

We’ll find out next issue.