Two themes dominate this issue of MOTOR: rain and racetracks. Unfortunately for our first Aussie drive of the new Ferrari 488 Spider we had far too much of the first and far too little of the second.

To properly enjoy, experience and access the performance available from Ferrari’s new turbocharged, toupee-tearing droptop, you need to be in the dry and on a bit of private bitumen that loops back in on itself. With preferably lots of run-off, and lots of time to peel back the Spider’s many layers.

For a start, 492kW and 760Nm (from a twin-turbo 3.9-litre V8) is always going to be a big ask of even 305-wide tyres if there’s only two doing the work. Ferrari ‘steps’ the torque delivery, each gear getting more torque than the last simply to give the rear bags some hope of transmitting the enormous grunt. The effect, though, is genuinely breath-taking acceleration: at 100km/h the 488 Spider accelerates like a WRX STI in first gear (which makes sense given the Spider will do 100-200km/h in 5.7sec) and it keeps going, long into licence-losing territory. It is one of the most potent cars I’ve personally ever driven and makes a BMW M4 or AMG C63 feel slow, and they are anything but.

It makes quite the noise in the process, though, a distinctive Ferrari V8 bawl, even if it’s a little quieter than you might first expect, to the point it almost feels like there’s an exhaust button somewhere to press (there isn’t). Ask a bit of the engine in a taller gear with lower revs and the 488 summons its tremendous torque while the turbos brood and hiss loudly behind your head. It sounds great.

Throttle response is great even if not as hyper-sensitive as we remember of the 458 Speciale but you’d cheerfully exchange some of that for the new, torquey flexibility. Rain blighted our road test but we got enough to know that this is one car you need to choose your road carefully. While its laser-guided front end (just two turns lock-to-lock) laps up the slow stuff, this is one prancing horse that prefers its plains very much boundless. It’ll dispose of fast and flowing roads like a missile with utmost stability and confidence and again, at a rate not very compatible with Australian speed limits.

At more relaxed speeds the 488 rides surprisingly excellently even on 35/30 profile tyres (F/R). The clever folding hardtop roof takes 14 seconds to origami away up to speeds of 45km/h. The whole shebang adds 50kg to the 488’s head-turning figure and all that fresh air will cost you $57K more than the hardtop.

That’ll get you one truly paradigm-redefining performance convertible, though, with more performance than you’ll ever tire of. You’ll just need a track. And some decent weather. 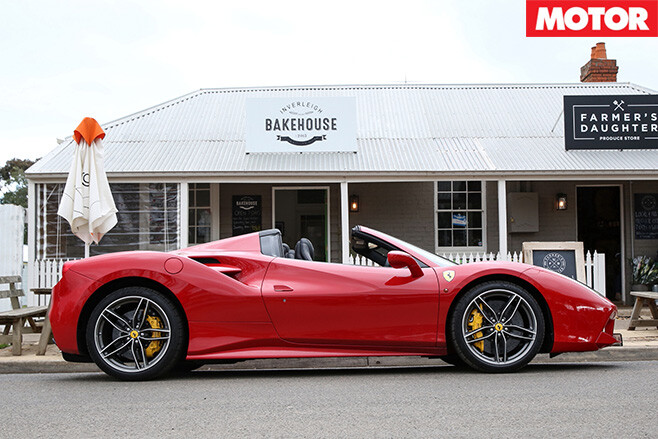