Incredible ability for the price makes the new Ford Focus RS something special.

WHAT IS IT?
Ford's feral fast all-wheel-drive super-hot hatch

WHY WE’RE TESTING IT
You need to ask? 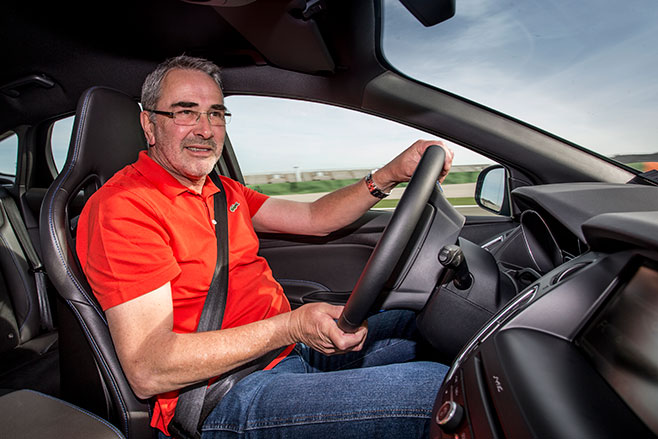 MAIN RIVALS
For ability it’s an Audi RS3 and Mercedes-Benz A45 AMG competitor, but for price the Ford Focus RS is in Subaru WRX STi and Volkswagen Golf R territory.

THE WHEELS VERDICT
Brilliant new Focus RS is a delight to drive, combining a truly terrific chassis with a fiercely effective drivetrain. It’s a bargain-priced challenger that’s worthy of comparison with notionally superior and much more expensive cars. 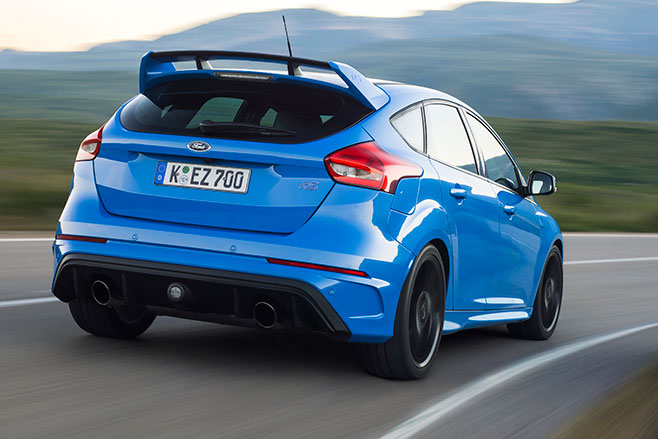 THE WHEELS REVIEW
Can they read the smoke signals rising from Spain as far away as Germany? Source of the smelly haze is the Focus RS noisily scribing sideways circles in a car park behind the pit area of the Circuit de Valencia. Drift Mode is the Ford’s spectacular party trick, a world-first, purpose-developed drivetrain, ESC and chassis calibration intended to unleash the Ken Block that lurks inside all of us.

Drift Mode’s effectiveness is attention grabbing, but it’s not what Mercedes-AMG and Audi’s quattro division should be worried about. What must instead concern them is the way this all-wheel-drive Ford delivers stellar performance and handling at a price that reads like a misprint. 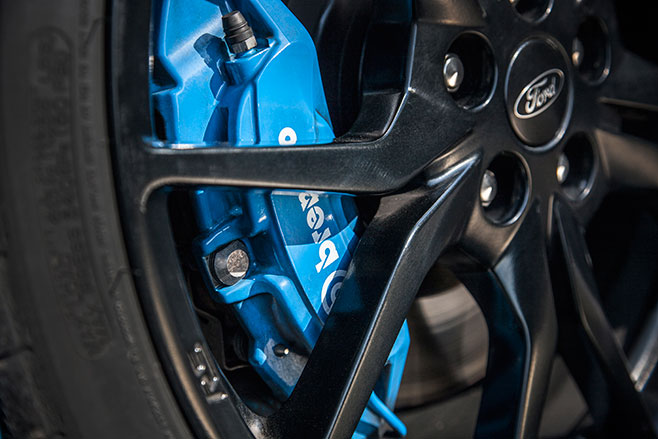 There’s a delicious harmony to the way the $51,990 Focus RS drives that’s lacking in the A45 and RS3. Both the Mercedes-AMG and the Audi are well above $20,000 more costly than the Ford, but neither can match the fluidity and cohesion of its dynamics.

The Ford’s snarly 257kW Ecoboost 2.3-litre four-cylinder turbo, a close relative of the same-size engine in the new Ford Mustang, delivers a lovely and linear surge of thrust. It may not produce quite as much power as Mercedes-AMG’s 265kW 2.0-litre turbo four or Audi’s 270kW 2.5-litre turbo five. But the RS does have a drivetrain that more than compensates for the shortfall. 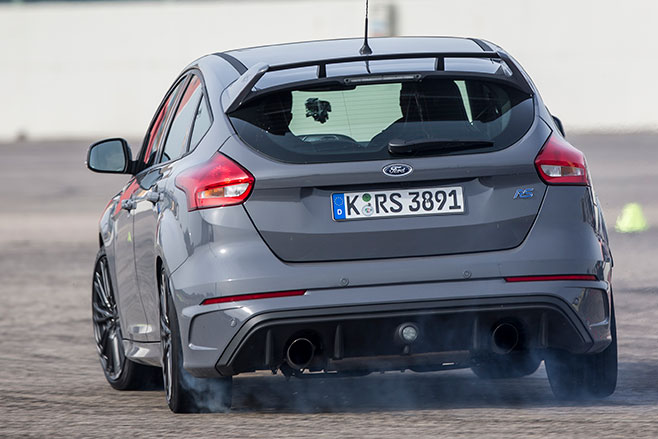 Bolted to the gearbox of the Focus RS is a simple power take-off unit for the propshaft to the rear axle. There’s no central differential or Haldex-style inter-axle clutch. Instead the rear drive unit in the Ford’s aft axle is home to a pair of multiplate clutches. The left- and right-side clutch packs’ electrically powered hydraulic actuators can be individually controlled. This component, supplied by Brit drivetrain specialists GKN, is the car’s not-so-secret weapon.

It’s perhaps the chief reason for a couple of the Focus RS’s almost miraculous abilities. When cornering, the rear drive unit can channel significant torque to the outside rear wheel, practically exterminating that joy-killer called power-on understeer. From a standing start, the system can lock both clutches to deliver truly awesome traction. 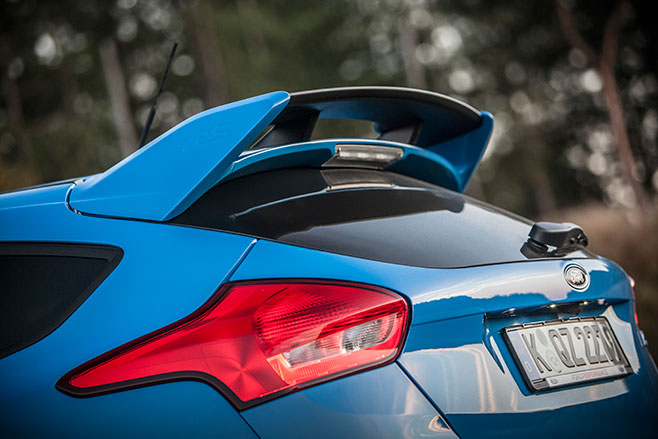 Achieving a good 0-100km/h was important to Ford, and the company’s claim of 4.7sec is impressive. Though realistic, it’s a few tenths shy of the A45. But as Ford Performance vehicle engineering manager Tyrone Johnson points out, in the Mercedes-AMG Launch Control must be selected to ready its seven-speed double-clutch for access to the car’s full potential. The Focus RS, which has a six-speed manual, is always ready to give its best says Johnson.

This isn’t the reason a manual was chosen for the Focus RS, the engineer explains. Instead it was the six-speeder’s weight advantage compared to any kind of auto. A prime program objective was to minimise understeer, he says, so having around 30kg less mass over the front axle was irresistible.

And the Focus RS is superbly understeer resistant. Its quicker-than-Ford Focus ST electric steering rack – just 2.0 turns lock-to-lock – highlights the car’s fabulous agility. Slight torque steer can sometimes be felt, but its direct and well weighted steering is one of this Ford’s best attributes.

The brakes aren’t bad, either. Big front discs clamped by fixed, four piston Brembo calipers do a great job of shedding speed. They only began to wilt a little after nine hard Track-mode laps of the Valencia circuit. 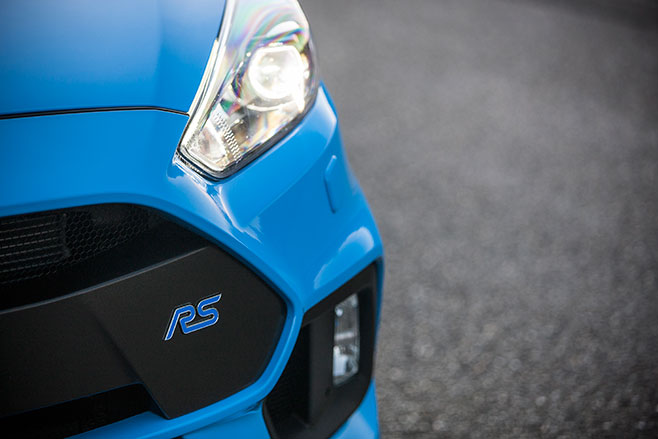 What didn’t change during those laps was the Focus RS’s unwavering composure. It turns better into corners, and drives earlier and harder out of corners than any obvious competitor. These same qualities make the Ford a formidable public road car. Its ride in both default Normal and selectable Sport modes, which use the same softer setting for the car’s two-stage variable dampers, is firmly disciplined, but not unbearable. Only Track mode engages the stiffer damper setting.

The Focus RS has few weaknesses. Its interior fails to convey the same visual excitement as the exterior, its thirst will be heavy when driven hard (it flashed an 80km-to-empty warning on the circuit with the fuel gauge showing above half full!) and its turning circle, like any other Focus with large wheels, is atrocious. 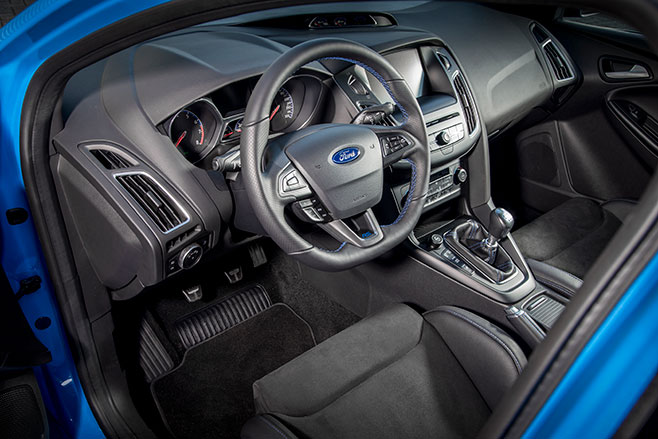 But this Ford is a case of where there’s smoke, there’s a fiery new challenger for the hyper-hatch crown.

DON'T MENTION THE WAR
Tyrone Johnson doesn’t hesitate when asked if his team intended to produce a Focus RS that could take on the likes of the A45 AMG. “Yes,” he replies. But then, the Ford Performance vehicle engineering manager doesn’t have a very high opinion of Mercedes-AMG’s hot hatch. “I have one in my department, but it’s got a dust layer about that thick (indicates with fingers) on top of it,” Johnson says. “No-one drives it any more. No-one enjoys it. It’s fine for transportation, but that’s it.”