The Opel Astra is new from the ground up, and will headline a cutting edge, high-tech future for Holden when it replaces the Cruze.

WHAT IS IT?
The next edition in a long line of Opel Astra/Kadett models. Many have been seen in Australia before in various guises (Vauxhall Viva, Holden Gemini, Holden Astra and Opel Astra). But this Astra is brand spanking new, chocked with class-leading tech and riding on a new-generation D2XX platform that’s both lighter and stronger.

WHY WE’RE TESTING IT?
The new-gen Astra is an extremely important car for Holden. With sales of the six-year-old Cruze dissolving faster than a Disprin (down 24 percent in 2014), it must hang on until the Astra lands about September 2016. It will boast a pair of new-generation direct-injection, turbocharged petrol fours, and the likelihood of a Sports Tourer wagon accompanying the five-door hatchback. This Holden Astra will form the cornerstone of Holden’s effort to maintain market share as it transitions from local manufacture, so it needs to be good. Really good. 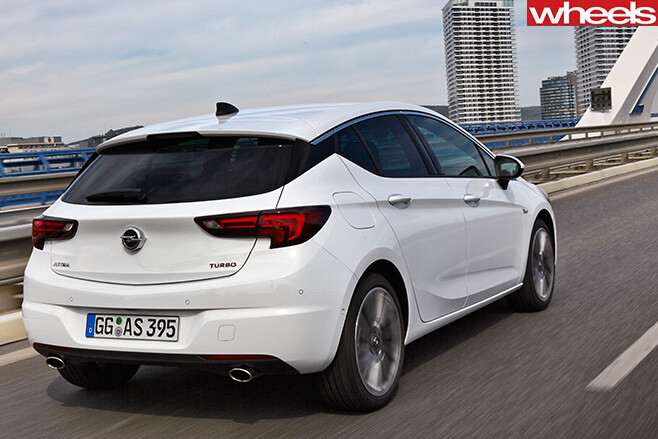 VERDICT
Handsome, refined, and well-built, the Astra has a premium feel that is several generations ahead of the Aussie-built Cruze it will replace. The new Astra challenges Volkswagen’s benchmark Golf for packaging excellence, and may even go one better for seating comfort. Its all-new 1.4-litre turbo-petrol four – expected to be the volume engine for Holden – is in need of some calibration and gearing alteration if it’s to truly shine. But then that’s what Holden’s engineers do best, and they have 12 months to get it right.

THE WHEELS REVIEW
IF CONSISTENCY is the key to success then Holden may face an uphill battle with its forthcoming Cruze replacement, the Astra. Destined to carry Holden’s fortunes from late 2016 in the most hotly contested class in Australia, the Astra will need to muster every fibre of talent, backed by a class-rattling value package, if it’s to get anywhere near the 34,218 sales record it set just a decade ago.

Thing is, the Astra faces exactly the same challenge in Europe. Hence GM’s German outfit, Opel, has thrown everything at the latest generation of its biggest seller. The Astra K, as it’s known in Opel circles, is virtually brand new, from its lighter and stronger platform to its full suite of direct-injection, turbocharged engines and class-leading levels of tech and equipment. 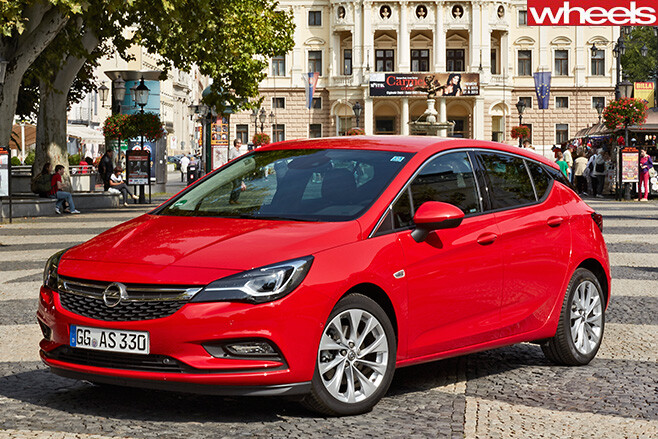 In an ever-expanding world, it’s refreshing that the new Astra is externally smaller than the model it replaces, yet internally larger in several key dimensions. Its sleek new body boasts a class-leading drag coefficient of 0.285, and has shrunk 49mm in length, 25mm in height, 5mm in width, and 23mm in wheelbase, yet Opel claims the Astra gains 35mm in rear-seat legroom – making it best-in-class – and an additional 22mm of headroom for the driver. Boot volume (with a space-saver spare) is a competitive 370 litres, though Astra’s luggage compartment is noticeably less voluminous than a Cruze hatch’s 403-litre boot.

It’s new Astra’s serious weight saving, however, that amends the previous model’s biggest failing (and by association, the porky Cruze’s). Even the smallest weight loss is a sizeable 120kg, while diesel models have dropped up to 200kg, meaning an Astra 1.4 turbo manual now weighs 1203kg. In comparison, an equivalent Euro-spec Golf 1.4 turbo is 1150kg.

Adding to Astra’s considerable gains in packaging and construction efficiency are its new engines. This is the first car to debut GM’s entire new-generation engine line-up simultaneously, adding an all-aluminium, direct-injection, turbocharged 1.4-litre petrol four-cylinder to the 1.0-litre turbo three-pot and 1.6-litre turbo four-pot that have been progressively introduced since 2013. The Euro Astra also debuts a brand new range of 1.6-litre ‘Whisper’ turbo-diesels, although they won’t be coming to Australia.

Boasting variable intake and exhaust camshafts, but not variable valve lift, the 1399cc version’s aluminium block saves 10kg over the old 1364cc engine’s cast-iron example, while its fuel consumption is vastly superior. The six-speed manual 1.4 turbo Astra’s EU combined figure of 5.1L/100km – supported by a virtually seamless idle-stop system – puts it marginally ahead of Volkswagen’s 92TSI Golf, and miles ahead of the thirsty Cruze. 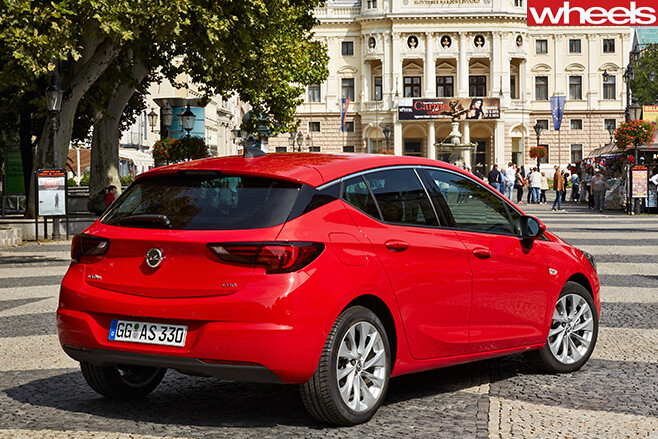 While Opel offers the 1.4-litre turbo-petrol in two guises, Australia’s base engine will be the higher-output version, producing 110kW from 5000-5600rpm and 230Nm from 2000-4000rpm. Tied to a carry-over M32 six-speed manual transmission with reduced friction and shift-quality improvements, or GM’s 6T40 six-speed automatic, the German-spec 1.4 manual we drove proved somewhat underwhelming.

Running very tall gearing that sees the Astra ticking over at just 1900rpm in sixth gear at 100km/h, the 1.4 feels flat-footed in its response, with little to give at 1500rpm and a gradual build in grunt towards its respectable mid-range, then revving out fairly cleanly to the 6250rpm cut-out. Opel claims 0-100km/h in 8.5sec, yet this engine lacks the supreme flexibility of Volkswagen’s 92kW/200Nm 1.4 turbo, featured in entry-level Golfs.

Apparently the “band width” of the Astra means that Holden has the scope to make adjustments to the 1.4’s gear ratios and engine calibration. And even Opel’s powertrain director, Roland Kessler, said “we will see evolutions of the 1.4 turbo going forward”, which gives hope that this otherwise promising new-generation engine will live up to its potential.

Its big sister, a 1598cc version punching out 147kW at 5500rpm and 280Nm from 1650-3500rpm (with an overboost function taking that to 300Nm from 1700-4700rpm), is a much better proposition. Already featured in Holden’s current Astra GTC Sport – the coupe version of the previous-gen Astra – the 1.6 turbo is much livelier than the 1.4, and it’s shorter geared too, showing 2200rpm at 100km/h in sixth. It pulls with proper authority no matter what the ratio, even from 1500rpm, and backs that up with some induction throatiness beyond 5000rpm.

Its quoted 0-100km/h time is 7.8sec, but in reality the difference from its less powerful sibling is much greater. Opel says the 1.6 turbo is 3.3sec faster from 80-120km/h in fifth gear than the 1.4, without too much penalty in its combined fuel number (5.9L/100km). While the 1.4 had no trouble attacking Austria’s motorways at 150km/h-plus, without the gearing to properly complement its power delivery, it lacked the effortlessness of the 1.6. 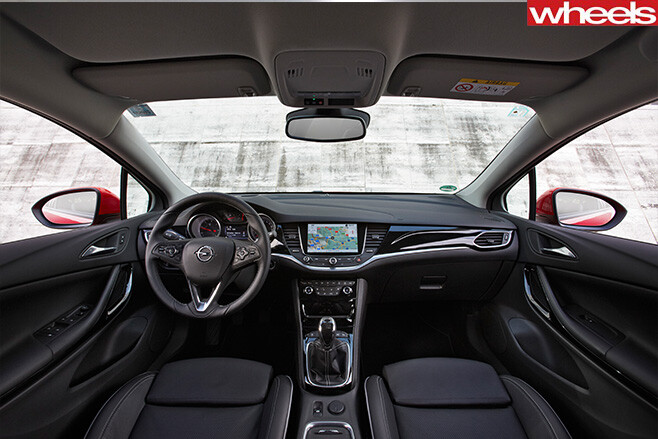 The new Astra is a quiet car though, even at such hefty speeds in strong crosswinds, and it feels incredibly stable. Suspension set-up reads the same as before, despite the fact that the D2XX platform shares absolutely nothing with the old Delta 1, meaning struts up front and a torsion-beam rear located by a Watts linkage (on all Astras with 110kW or greater).

Opel benchmarked the Ford Focus for handling and the Mk7 Volkswagen Golf for ride, aiming to be more dynamic than the VW, but also comfortable. And for the most part, they’ve achieved it. The highlight is arguably Astra’s steering, with a crispness and accuracy around straight ahead and through constant-radius corners that enhances the driver’s feeling of connection and makes the car easy to place. The 1.6 brings a Sport mode that adds some meat to the weighting without muddying feel, while GM’s new steering wheel is brilliant to hold, matched to an exemplary driving position.

The 1.4 on 225/45R17 Michelin Primacys is arguably the pick, given its sweeter blend of ride suppleness and handling poise, although the sports-suspended 1.6 wearing 225/40R18 Bridgestone Potenza T001s offers much more grip. That said, with traction control switched off to prevent ESC intervention, the 1.6 will easily spin an inside wheel in tight corners, and would benefit from some front diff smarts.

What may prove Astra’s piece de resistance, though, is its interior. With excellent front seats approved by AGR (a German campaign for healthier backs) that took five years to develop, each weighing 10kg less than before, the Astra combines class-leading comfort with available features such as seat ventilation and a massage function. 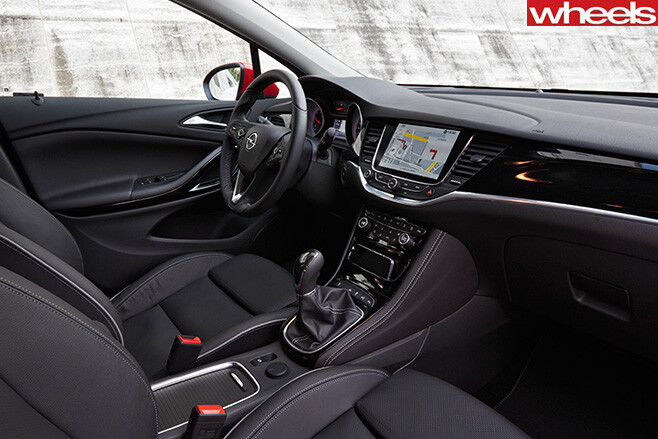 The rear-seat, too, is similarly impressive, with terrific support, great vision and tonnes of room, though the Golf is slightly better at seating three abreast. And while Astra offers twin rear USB ports, outer seat heaters and fold-flat backrests, even the top model lacks a centre armrest or air vents.

But it’s the front row that will impress most. Besides small-ish buttons for the climate-control panel, ergonomics are superb. Even the new column stalks are visible above the wheel spokes, while Opel’s IntelliLink touchscreen infotainment is arguably the best in the business, with beautifully crisp graphics and smartphone-style functionality, plus Apple CarPlay and Android Auto. Euro models also include GM’s OnStar telematics, as well as a 4G wi-fi hotspot, though OnStar will take several years to reach Australia.

The two grey areas are exactly which features our Astra will pick-up from the absolutely loaded European model, and whether we’ll also see the generously proportioned Sports Tourer wagon. While rear seat heaters and massage functions are of little importance, the availability of stuff like IntelliLux LED matrix headlights – just like an Audi A8 – as well as forward collision alert and Autonomous Emergency Braking (AEB) with full auto-brake up to 60km/h, thrust the new Astra several generations ahead of the cut-price Cruze it will replace in this country.

So, despite a lack of consistency in Holden’s small-car line-up, which stretches back more than 30 years, the new-generation Astra is good enough to overcome any prejudice that punters may hold against General Motors.

In terms of room, styling, comfort and features, it’s far beyond expectation. Now if Holden can successfully achieve a ride/handling sweet spot for Australia, and manage to cure the 1.4 turbo’s driveability and gearing flaws, then the Astra’s best may be yet to come. Watch this space.