WHY WE’RE TESTING IT
In the 1990s and early 2000s the Honda Civic was one of the best sellers in its class. A staggering 23 million have been sold globally since its launch in 1972. Then Honda dropped the ball and fell off the radar resulting in plummeting sales.

But the car maker is back. Using the slogan “Dare to Dream”, Honda’s introduced its “bold” new Civic. The big question: Is the 10th generation Honda Civic VTi-LX the stuff of which dreams are made? 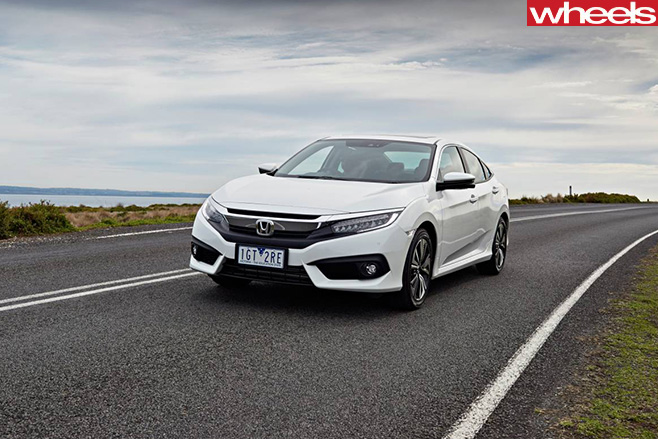 MAIN RIVALS
Honda’s challenge is massive. The small car market segment is the most popular and hardest fought in Australia. So this Civic better be good if it is to wrestle drivers away from the top selling Hyundai i30, Mazda 3 and Toyota Corolla.

THE WHEELS VERDICT
The VTi-LX is a more sophisticated drive than the similarly priced Hyundai i30 SR Premium. Its fuel efficiency is exceptional and price attractive. Does it fulfil its brief and appeal to younger drivers? I think they’ll be holding out for the hatch due early 2017. But the Civic VTi-LX should not be underestimated. It’s a sleek drive and a return to form for the once popular brand.

THE WHEELS REVIEW
I wanted to love this car the moment I saw the new Honda Civic advertisement. The ad shows a frustrated, undervalued TV reporter crossing live from a banal dog show, when lo and behold! A meteorite shoots across the sky. Knowing a career defining scoop when she sees it, she jumps in her new Honda Civic and successfully chases the story.

Having been a TV reporter for 25 years, I have covered more than my fair share of dog shows and longed for a meteorite strike to catapult my career into the stratosphere. Sadly, like the ad, my dream is accompanied by Supertramp’s 1974 hit “Dreamer, you’re nothing but a dreamer”… 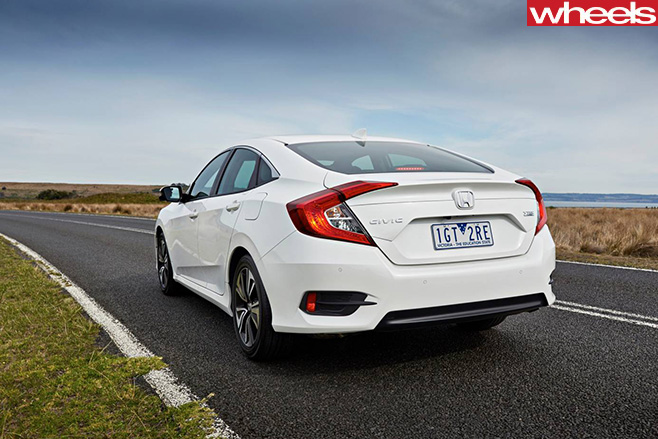 But enough personal anecdotes. With its “Dare to Dream” slogan, Honda is clearly trying to appeal to a younger, aspirational driver.

By old school standards the 1.5-litre engine isn’t big. But this one’s turbo-charged, giving it similar grunt to many 2.0-litre naturally aspirated rivals. The VTi-LX generates an impressive 127kW and 220Nm; with that sort of oomph, drivers will not be left behind at the lights.

On longer trips the VTi-LX is noticeably quiet. Steering is comfortable and the car holds the road well.

My suburb’s littered with speed humps and the VTi-LX cruises over them without issue. Its suspension strikes the right compromise between point-and-scoot handling and council-imposed bump absorption.

Sticking with its “Earth Dreams” (which I’m told is environmentally sound) philosophy, the VTi-LX’s claimed average fuel consumption is a low 6.0L/100km. Fortunately, this car does what it says on the box; with a combination of freeway and city driving I recorded 6.6L/100km.

This may be in part due to the Continuously Variable Transmission. Despite a persistent drone on acceleration, the CVT delivers a smooth drive. Even so, I’m a manual fan and I’m disappointed this model can’t be had with three pedals. 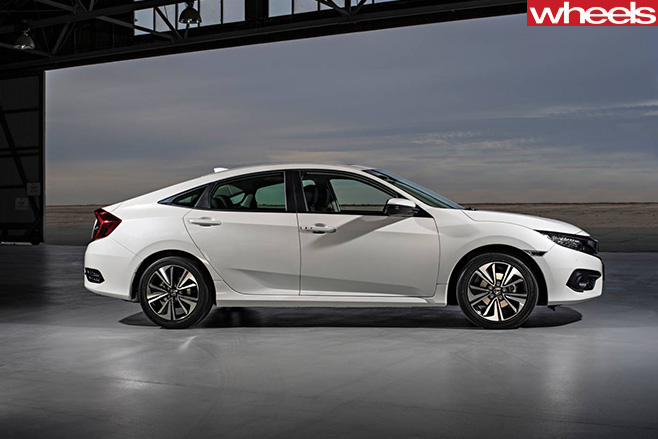 Unfortunately for Honda, the exterior of the sedan might struggle to attract youngsters. At a long 4.64m it’s just 30cm shy of a Holden Commodore. In no way can the Civic still be considered a small car. The VTi-LX also has more booty than Kim Kardashian. While this may appeal to KK fans, the aesthetic fails on the Honda.

The cavernous 517L boot is perfect for smuggling your entire family into the local drive-in. A space-saver spare tyre is partly responsible for the Civic's immense luggage-swallowing capacity.

The cockpit looks and feels classy, with comfortable leather appointed seats. These can be electronically adjusted, allowing for a perfect driving position.

The electronic dash display will appeal to Gen Y and below, but it may prove a little too high-tech and flashy for older drivers. The new LCD instrument display panel comes with all the bells and whistles like digital radio, built in satnav and Bluetooth phone and audio connectivity. It is, however, blindingly confusing. Drivers can “swipe, tape and pinch” the controls, just like a tablet or smartphone. Good luck trying to safely do that while you’re driving.

Honda offers Apple CarPlay and Android Auto saying “just plug in your phone and go”. Ummmm….plug in where exactly? You need to be an Olympic gymnast to find the USB input. One is hidden deep behind the centre console. I found it by mistake while fumbling around on the floor for my dropped sunglasses. The other USB connection hides in the armrest console which only slides back halfway – until you wrestle with it a bit more, that is, and realise it can in fact lift up. 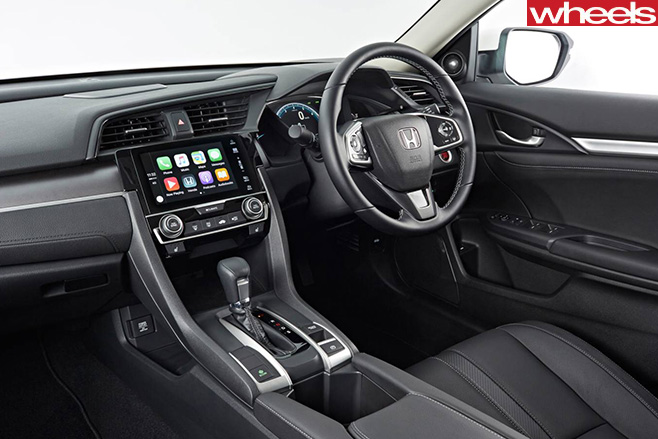 Despite this, the finishes are a classact. Both the steering wheel and gearshift knob are wrapped in leather. The interior provides masses of legroom both front and back. It’s a comfortable ride for both drivers and passengers of all shapes and sizes.

The sunroof is perfunctory without being panoramic.

Honda’s top of the range VTi-LX packs additional features that I liked.

Heated seats, for starters. The first thing women ask me about a new car is: “Does it come with heated seats?” This model does not disappoint.

The climate control system is easy to use. Unfortunately there are no separate vents for rear passengers.

The 452-watt premium audio system with 10 speakers plus subwoofer making listening to Supertramp (or you know, something a bit cooler) entertaining. Alas, why kill the good old volume knob? It’s been replaced by both an overly sensitive touch control on the glass screen and a steering wheel mounted roller control. Both are maddening. It’s impossible to get the right volume level.

Then there’s Honda’s Sensing Suite of driver assist technologies. Some of these, like Lane Keeping Assist (which sensing if you’re wandering from the lane) and Adaptive Cruise Control with Low-Speed Follow (which slows down if the car in front of you does), can be infuriating for control freaks. But they are a step closer to autonomous driving which will apparently lead to fewer accidents.

I also like the VTi-LX’s Lane Watch feature. It’s mounted beneath the left-hand door mirror and projects any potential blind spots onto the screen the moment you indicate left or right.

Honda has sold an impressive 23 million Civics since its launch in 1972. The brand used to be hot, but for some reason they drove right off the car map.

Now, Honda – using its “Dare to Dream” motto – is trying to woo back drivers with its bold, new 10th generation Honda Civic.

The top of the range VTi-LX sedan boasts Honda’s first 1.5-litre turbocharged engine. Honda claims an average fuel consumption of just 6L/100km. This model comes with all the bells and the whistles and is priced at a competitive $33,590 ($34,165 with metallic paint). The entry-level model is available for just $22,390.

Only the sedan version is currently available but for those looking for something a bit zippier, a hatch is due to arrive in 2017.