WHAT IS IT?
The ‘warm-sedan’ sporty flagship of the 2016 AD Hyundai Elantra line, complete with a development of the 1.6-litre direct-injection turbo-petrol four that powers the Veloster coupe. But this is more than just an engine transplant. Proper multi-link independent rear suspension and a host of go-fast goodies promise a wolf in sheep-wearing-trainers clothing.

WHY WE’RE TESTING IT?
Presented with one of the most challenging (bitumen) drive loops you’ll find anywhere in the world – east from Albury airport via Anglers Rest, then down then coast to Bairnsdale – the Elantra SR Turbo carries a lot of weight on its shoulders. And that includes the DNA for next year’s new-generation Hyundai i30 SR warm hatch and i30 N hot hatch.

MAIN RIVALS
Anything with a semi-sporting bent, including trusted steeds like the Mazda 3 SP25 and all-new, similarly priced metal like Holden’s 147kW Astra RS. Can’t forget the Honda Civic RS either, though it shoots itself in the foot somewhat by only being available with a CVT transmission. THE WHEELS VERDICT
A classic case of the longer and harder you drive something, the better it gets. Indeed, few would credit the inconspicuous-looking Elantra SR with such a depth of handling talent and mid-corner speed and grip. This is a really entertaining ‘warm four’, and it just gets better when you remind yourself what it costs. But it’s not a holistic sporting sedan; more a Middle America/Asia design that’s been put through an exhaustive Michelle Bridges course and popped out the other side much fitter than anyone expected.

THE WHEELS REVIEW
THERE’S a strong chance that if you’ve ever considered buying a performance sedan, you’ve never considered a Hyundai Elantra. Across six generations spanning 25 years, there’s never been one worthy enough. Until now. As its name suggests, the Elantra SR Turbo’s sporting rhetoric begins with an engine transplant, in this case the familiar 1.6-litre direct-injection turbo-petrol four from the Veloster SR coupe. But this isn’t a parts-bin application. A new horizontal intercooler with shorter piping is said to reduce turbo lag and improve throttle response, but it’s the new HWIT mixed-flow turbocharger with electronic wastegate (instead of the Veloster’s twin-scroll Borg Warner unit with vacuum-controlled wastegate) that does the heavy lifting response wise.

More consistent control of boost pressure means the Elantra SR’s revised donk achieves optimum boost earlier, and can maintain boost pressure without fluctuation. And the result is a seriously chubby engine for a ‘warm sedan’, with an impressively fit and thrummy mid-range making up for any lack of elasticity in the top-end.

Terrific new six-speed manual shift too – also set to feature in next year’s new-gen i30 SR and Hyundai i30 N hatches – though possibly a little too gappy between second and third ratios. If you want really snappy gearing, you’ll need an extra $2300 for the seven-speed dual-clutch version, though the engine’s torque reserves keep the Elantra SR charging strongly. 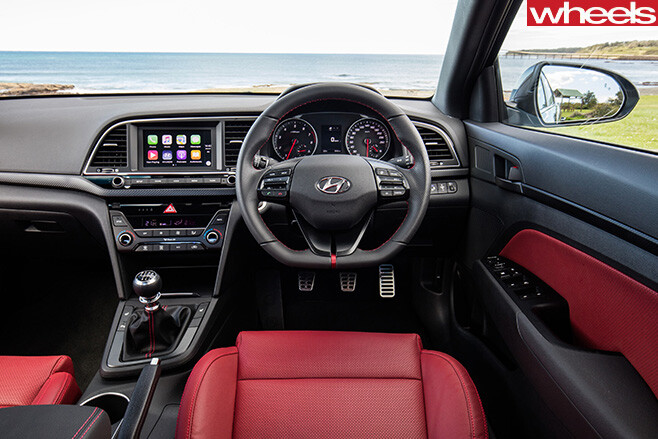 And it doesn’t mind a good strafe, this car. With brand-new multi-link independent suspension hiding beneath its booted rear end, larger 305mm front discs (up from 280mm) and quicker steering for a slight reduction in turns lock-to-lock (from 2.66 to 2.57), as well as months of specific Australian tuning on top of Nurburgring and Namyang dynamic development, the Elantra SR is bloody good fun.

Its steering lacks the decisiveness we’d like off-centre, but once there’s a quarter-turn of lock on, the SR carves impressively neat, quick and confident cornering lines. For once, here’s a car that is more than the sum of its parts. Even the 225/45R17 Hankook Ventus tyres do their bit for Elantra’s dynamic cause because they rarely undermine its great balance or its unexpected driver involvement.

What the manual misses out on is the DCT’s ‘Drive Mode’ set-up, meaning just the one steering and throttle calibration. A tad more steering weight and slightly sharper throttle response wouldn’t go astray, but you only notice those things after swapping out of the dual-clutch.

Either way, both share abilities beyond expectation, and a level of equipment and finish that is very persuasive for the price. Add in quality seats and a relatively polished ride and you have one of the dark horses of 2016.