According to Lamborghini, this new Spyder is the ‘lifestyle’ Huracan. What that means is anyone’s guess – perhaps it only drinks organic, ethically-grown unleaded, or likes to hang out in underground heavy metal clubs?

Whatever; we’re far more interested in what effect removing the roof has had on the driving experience than its social status.

The electronically-operated soft top takes 18 seconds to raise or lower and can do so at up to 50km/h, which proves very handy in Melbourne’s highly changeable weather. The reduced sound insulation does increase road and wind noise on the highway, but that’s the price you pay for the ability to put the wind in your hair at the touch of a button. 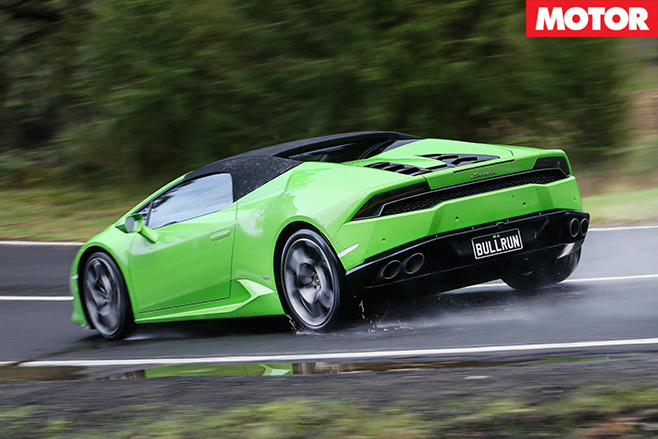 An inevitable consequence of deleting the roof is a loss of body rigidity and to compensate Lamborghini has strengthened other parts of the Huracan’s aluminium/ carbon fibre structure, resulting in a 120kg weight increase over the coupe. That’s quite a lot, but while it looks bad on paper, in reality, it A makes next to no difference when you have a 449kW/560Nm 5.2-litre V10 propelling you.

This is still an eye-wateringly fast car. Officially, the Spyder is 0.3sec slower from 0-200km/h than its hardtop sibling, but at 10.2sec it’s still easily a 10-second car over the quarter mile. It’s a real achievement to even make it to full throttle, let alone hold it for any length of time, and that atmo V10 also makes a savage noise, howling to its 8500rpm cutout and then barking aggressively on downshifts.

The seven-speed dual-clutch gearbox is extremely good by Lamborghini standards, miles better than the Aventador’s ISR system. Take-offs are smooth, shifts are rapid and the paddle action crisp. 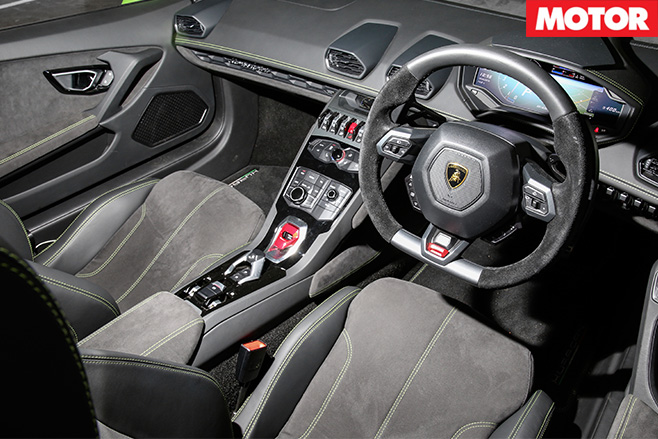 Personally, I find the engineered-in thumps on gear changes irritating, but apparently customers like the sensation and it does add a certain supercar theatre to proceedings.

Handling is similarly unaffected by the Spyder’s extra heft. Perhaps back-to-back with the coupe its responses would feel slightly dulled, but the drop-top is still capable of tearing down a road at incredible speed. Dry corners were few and far between on our test drive, but those encountered suggested that, like the coupe, you would be brave or foolish to get near the Huracan’s limits on the public road.

It’s easier to do so in the wet, where the security of all-wheel drive is welcome. In either Strada or Sport mode the electronics keep a very tight rein on any wayward behaviour, but selecting Corsa loosens the shackles and allows the Huracan to display some of its dynamic personality. Unlike its rear-drive rivals, there’s no wheelspin to worry about. 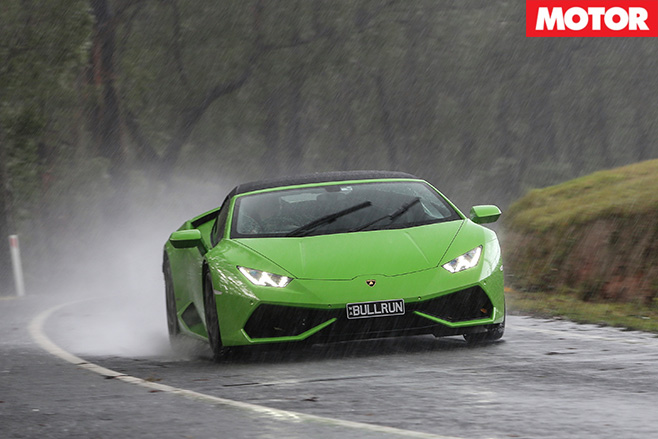 Instead when grip does run out, it’s the front that slides first. This can be a little disconcerting, particularly as sometimes adding throttle sends drive to the rear and neutralises the car, while on other occasions it drags the front wide further, exacerbating the problem.

It’s still a thrilling and engaging driving experience, but it can be tricky figuring out what Lambo’s baby bull is going to do next – the best of its rivals feel more cohesive at the limit. Ideally you’d combine the lighter steering and softer suspension of Strada with the greater ESP freedom and engine response of Corsa, but sadly settings can’t be mixed ’n’ matched.

Then again, if you’re a driving purist, Lamborghini will point you in the direction of the LP 610-4 coupe or rear-drive LP 580-2. The Spyder’s mission statement is to look amazing and make an incredible noise while helping your tan – it does extremely well, particularly in bright green. 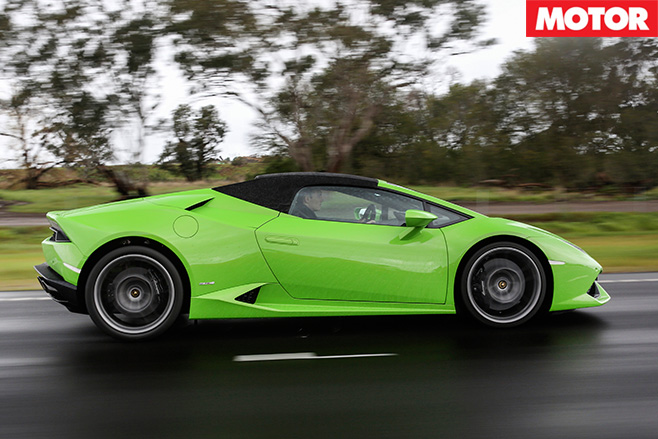 For anyone in the market for a convertible Lamborghini, the Huracan Spyder will deliver exactly what they’re expecting.

For our money, however, the LP 580-2 remains MOTOR’s Sant’Agata screamer of choice, while McLaren’s 650S or Ferrari’s 488 are the Spiders that best fit our lifestyle.

LIKED: Beast of a V10; work on your tan while winding along roads
DISLIKED: Annoying clunks with gear changes; drive modes not configurable 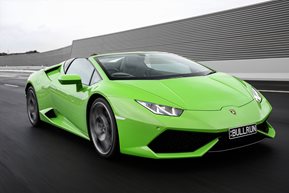