Named in honour of the Mayan hurricane god

The pearly white smiles of the meteorologists on the evening news are at odds with the dark, foreboding forecast they are delivering. Several days of severe weather is due to hit Melbourne, threatening to put a dampener on MOTOR’s date with Lamborghini’s new Huracán.

Lambo’s latest baby supercar takes its name from the Mayan hurricane god, so perhaps the impending storms are a warning – give the Huracán a good review lest Victoria’s capital be swept away by an apocalyptic flood.

It’s not the weather the Huracán need fear, however. It’s entering the stormy seas of the fiercely competitive junior supercar segment, occupied by prodigiously talented machinery including the Porsche 911 Turbo, McLaren 650S and Ferrari 488 GTB – not to mention the enemy within, Audi’s new R8, with which the Huracán shares much of its body structure and mechanicals. 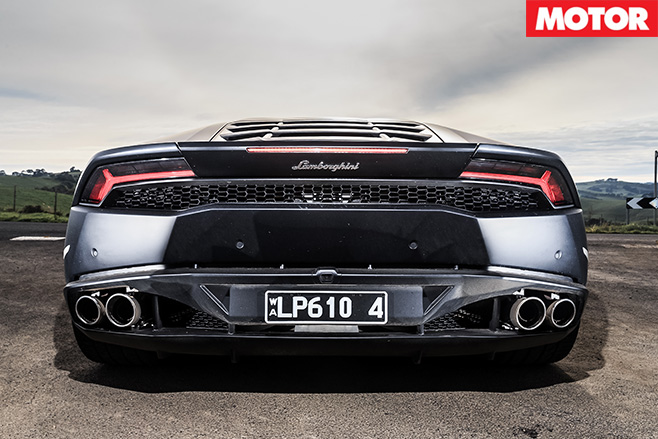 If that were not challenging enough, it also has very large shoes to fill. The Huracán’s predecessor, the Gallardo, is Sant’Agata’s highest-selling model by a country mile, with 14,022 sold during its 11-year production run.

Lamborghini faces a tricky balancing act with the Huracán, needing to maintain its reputation as the wildest and most outrageous of the supercar makers, while at the same time delivering the comfort and civility expected of any modern car – cantankerous road manners can no longer be excused as ‘character’ in 2015. It’s a relief, then, to discover while escaping Lamborghini’s Richmond HQ that the Huracán is no more demanding to drive in traffic than an Audi A5.

The driving position is near perfect, with ample room and plenty of adjustment for both steering wheel and seat. Personally, the brake pedal is set a little high, though it’s nicely located for left-foot brakers. 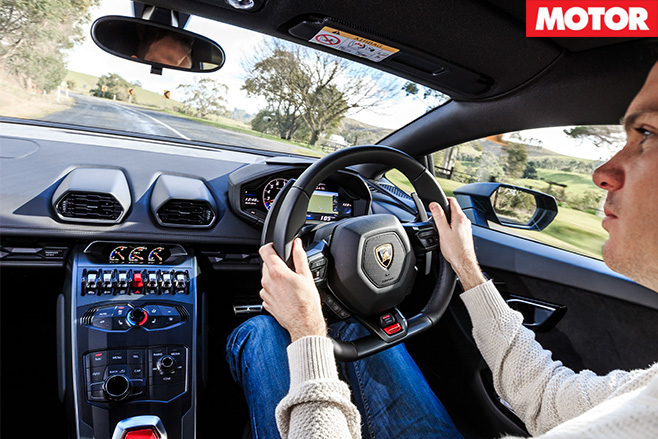 The Audi-derived switchgear perhaps isn’t the most ergonomically elegant solution, but is easy enough to use, and the row of aircraft-inspired switches that operate the electric windows, hydraulic nose lift, start-stop and ESC systems is a nice piece of supercar theatre.

What works brilliantly is the TFT instrument display shared with the new Audi TT. Able to display speed, revs, sat-nav or infotainment information, or to be split in two to show a combination of each, the screen is clear and crisp and negates the need for a vision- and space-robbing centre screen.

Likewise, moving the switchgear traditionally mounted on column stalks – headlights, wipers, indicators – to the steering wheel a la Ferrari is a masterstroke. It feels odd to begin with, but it soon becomes second nature and means you never need move your hands from the wheel. 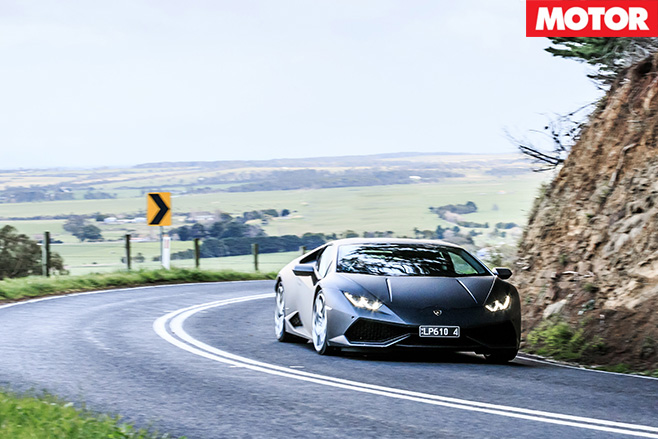 Also mounted on the steering wheel is the ‘ANIMA’ switch (Italian for ‘soul’), which adjusts steering weight, engine and gearbox calibration and damping firmness. Set to ‘Strada’ (road) mode, engine response is smooth, the steering light and the dual-clutch gearbox – Doppia Frizione in Lambo-speak – shuffles through its seven ratios with the fluency of a Monaco croupier.

It even rides reasonably well, particularly on the freeway, though road noise is significant and rear vision abysmal, with massive three-quarter blind spots and thin slots in the engine cover – a clear engine cover is an option – offering the only clue as to what’s behind you.

Still, the excellent stereo overcomes the former issue and a quick squeeze on the throttle ensures nothing is behind you for long. However, while Lamborghini appears to have successfully tamed its latest Bull, there’s a nagging thought in the back of the mind that perhaps it’s a bit… undramatic. 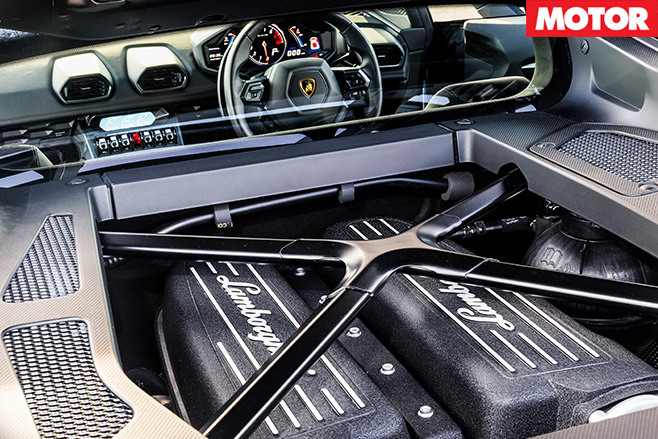 In Strada mode the engine note is hushed and, apart from the ever-present road roar, the only real noise of note is the subtle but noticeable ttsssshh as the dual-clutch gearbox swaps cogs.

As the traffic momentarily thins, Sport mode is selected and five pulls of the left-hand paddle are answered instantly by a progressively more raucous flare of revs from the 5.2-litre V10 sitting midships. 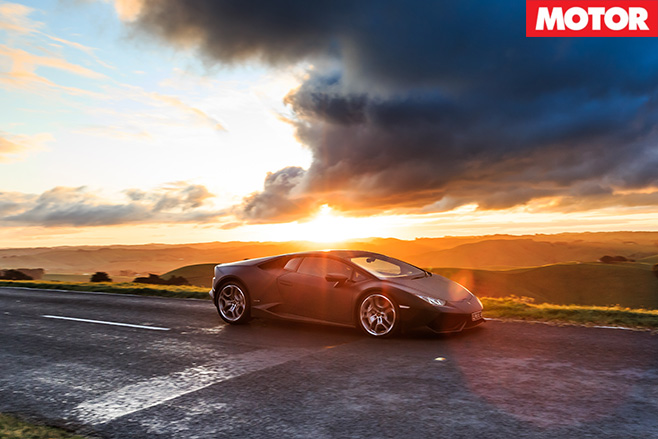 Floor the throttle and the Huracán catapults forward, howling its way to the 8500rpm redline before an automatic upshift to third signals that it’s time to back off. In that moment of pure savagery, the Huracán dispels any notion that Lamborghini has somehow gone soft.

With snapper Ellen Dewar now excitedly installed in the passenger seat, our destination is the rolling green hills of Victoria’s South Gippsland region to let the latest Raging Bull off the leash. Away from the freeway and on poorly surfaced country back roads, the Huracán’s ride quality begins to deteriorate somewhat; adaptive magnetorheological dampers are standard on Aussie cars, but an extra layer of compliance would be welcome on bumpy back roads.

Unusually for a press demonstrator, our test car is almost standard, with $20,300 of matt black paint and an amusing $5700 for a rear-view camera and parking sensors the only options fitted.

The car’s basic specification robs us of the opportunity to try the Huracán’s controversial Dynamic Steering, which alters the ratio from a super quick 9:1 at parking pace to a relaxed 17:1 at high speed. The system can also apply minute corrections to counter under and oversteer, but has come under plenty of criticism overseas for its unnatural feel. 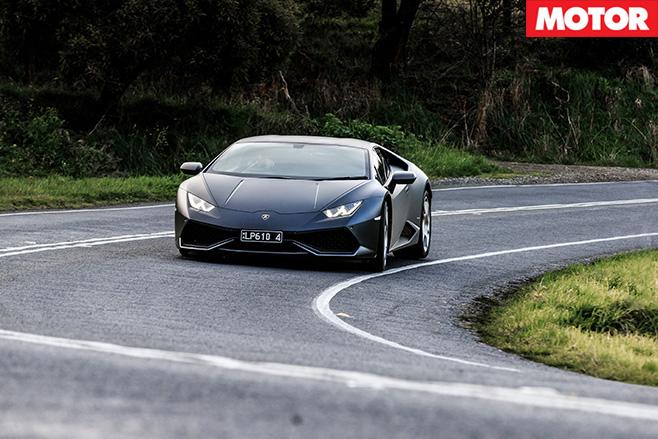 Finally, we’ve reached some corners worthy of the name and it quickly becomes clear that regardless of whether it’s any good or not, Dynamic Steering is redundant because the standard system is excellent. At 2.8 turns lock-to-lock, it’s quite slow by modern standards, yet it feels good to drive a car without the ubiquitous variable-ratio racks now found in everything from a Ferrari 458 to a Ford Focus ST.

The promised wild weather has arrived, soaking the road, but with the electronics acting as a safety net there’s enough feedback to start pushing the Huracán in an attempt to discover how it behaves as it approaches its limits.

Even on a sodden road grip levels are immense, with excellent traction and stability courtesy of the all-wheel drive system. Despite a 30:70 front-to-rear split – with the ability to send 100 per cent of the drive to the rear – the car still feels lead by the front; not in a power understeer kind of way, but it certainly doesn’t feel anywhere near as throttle adjustable as something like the last R8 or a 911 Turbo. 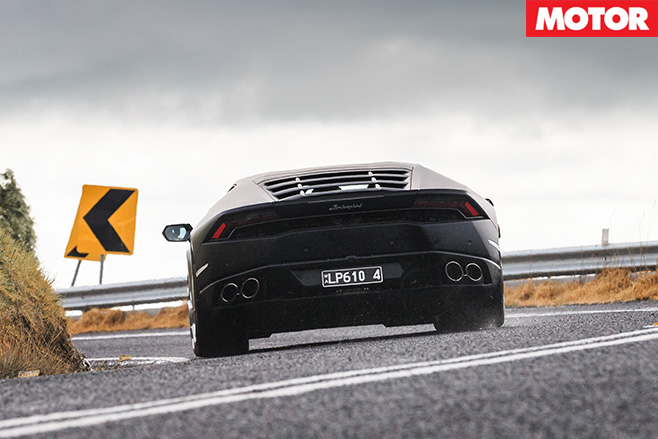 Even in Strada mode the ESC is quite lenient, though when it decides you have overstepped the mark it cuts power dramatically and won’t give it back for quite some time.

With Sport engaged, the wonderful 5.2-litre atmo V10 begins to belt out a bona fide supercar soundtrack that can probably be heard 100km away back at Lambo HQ – this is not a car in which to make inconspicuous progress.

Despite lacking the forced induction of its Maranello and Woking counterparts, the Huracán is beautifully tractable and pulls smoothly from low revs. Eight kilograms have been shaved over the Gallardo thanks to the clever new structure, which fuses an aluminium spaceframe with a carbonfibre spine, but at 1422kg dry (around 100kg more at the kerb) the Huracán is not particularly light. However, even cruising along in seventh gear, your pace can be alarming, such is the ease at which speed accrues. 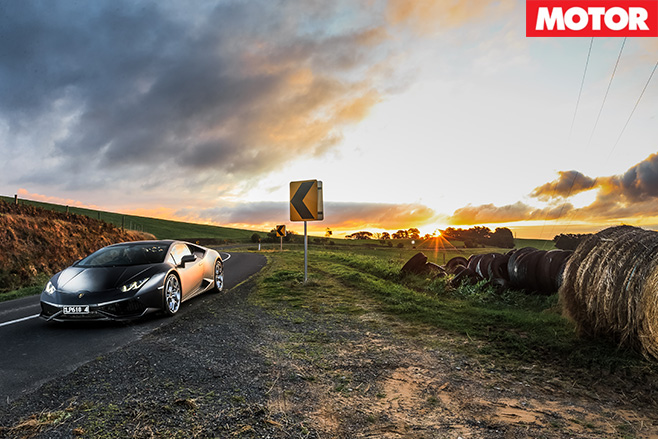 As the weather clears and the roads begin to dry, more of the Huracán’s performance potential can be explored. Find a straight, clear section of road and engage launch control; left foot on brake, Corsa selected, ESC off, floor the throttle then release the brake – all four wheels spin momentarily, but first and second gear disappear in an instant.

Lamborghini claims 0-100km/h takes 3.2sec with 200km/h arriving in 9.9sec – very similar numbers to the Porsche 911 Turbo – and from the seat of the pants it feels every bit that fast.

However, while the speed is similar, the delivery is totally different. Whereas the Porsche propels you forward on a giant glob of turbocharged thrust, the Huracán’s linear V10 builds to a glorious crescendo; at 4000rpm it’s impressive, above 6000rpm it’s verging on uncomfortable and approaching 8500rpm it’s borderline terrifying. 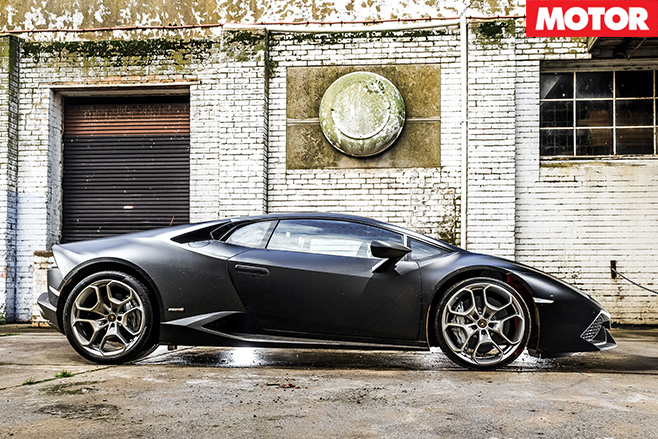 Ludicrously, the Huracán, along with its R8 twin, are the slowest cars in their segment by some margin (the McLaren 650S and Ferrari 488 claim 0-200km/h in 8.4sec), but never have numbers on paper been more irrelevant. The Huracán is jaw-droppingly, mind-bendingly fast; even in third and fourth gear you almost feel to float in your seat, suspended by longitudinal g-force.

Thankfully, the brakes are Herculean and more than up to the task. Quite sensitive in operation, a slight brush is usually enough to wipe off a decent chunk of speed, and a decent push almost sends you through the windscreen. Cornering speeds are equally ludicrous, the baby Lambo scything through corners and mocking you for not carrying another 10 per cent entry speed. 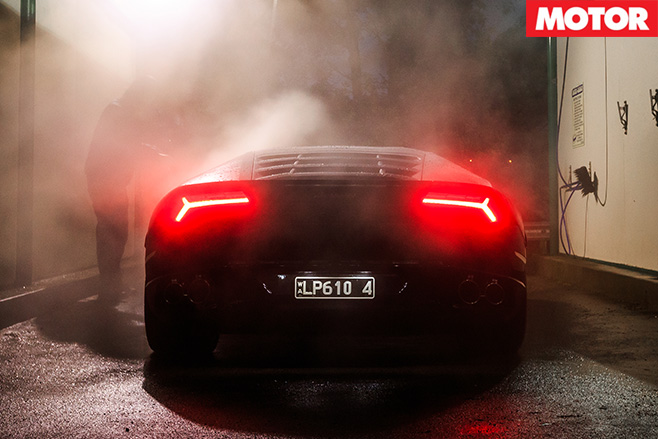 Previous experience on-track suggests there is quite a playful chassis underneath, but on the public road you’re unlikely to get more than the occasional hint of under or oversteer unless you completely abandon common sense.

It’s no oversteer hero, but that’s not to suggest driving it is in any way one-dimensional. Perhaps it’s the sheer speed, perhaps it’s the quality of the controls or just the outrageous metallic bark erupting from behind you, but there’s enjoyment in just driving the Huracán.

There are, however, some issues. When driven hard, the baby Lambo’s dislike of bumps becomes even more apparent; never in a way that suggests it is losing composure, but it tends to skip and hop rather than keying into the road, which does rob a little confidence. 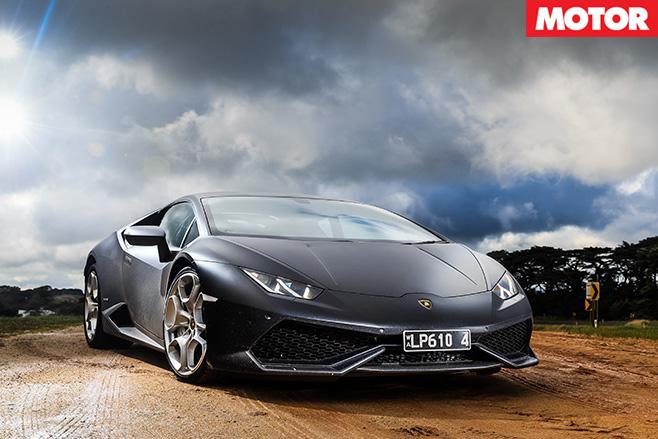 Likewise, while the brakes are mighty and the gearbox lightning-fast in its responses, the computer feels to over-rev the car slightly on downchanges. While it adds to the theatrics no end, with massive flares of revs, it feels to push the car on a little with each downshift, which can be slightly alarming if you’re braking late and already approaching corners at warp speed. Admittedly, these are small grievances, almost nit-picking, but in a market this competitive, it’s the small things that make all the difference.

Then there are the looks. Purely subjective of course, but to these eyes the Huracán looks a little hunchbacked, particularly from rear-three-quarter. While appropriately wedgy and dramatic, it lacks none of the aggression but most of the beauty of the original Gallardo, which itself became sharper and angrier over its lifespan.

It seems plenty of others disagree, however, as the Huracán is selling like mad; in its first full year of production it almost matched the Gallardo’s best sales effort, and that’s before the inevitable Spyder version arrives. Locally, Lamborghini sales are up almost 900 per cent year-on-year. 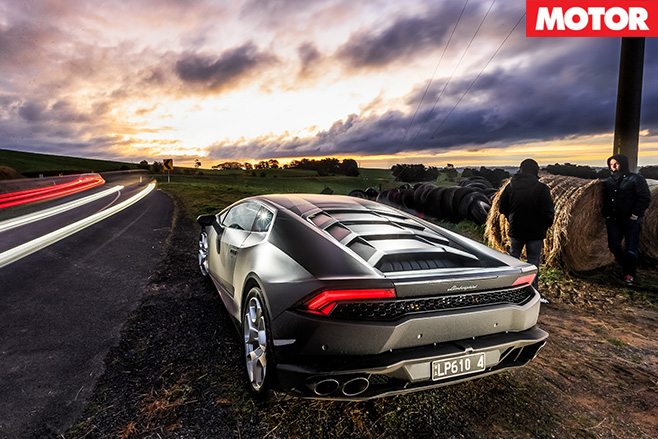 And rightly so for, bar some minor complaints, Lamborghini has delivered a stunning baby supercar. Easily docile enough to be driven daily, it turns into a rabid, snarling animal at the flick of a switch and a press of the throttle. It’s a much better car than its Aventador big bro, and as the last bastion of naturally-aspirated goodness (along with the R8), its very existence deserves to be celebrated. For Lamborghini at least, it appears the forecast is pretty bright. 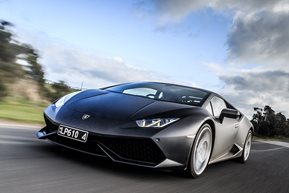