Like a normal MX-5, only better. And faster. And bett…oh wait.

WHAT IS IT?
The racing version of our reigning Car of the Year. Sadly it’s not for Australia – not yet anyway – but Mazda says it could bring it to local race tracks if the planets align.

WHY ARE WE DRIVING IT?
Because it promises to be the ultimate version of one of our favourite cars. Plus, Mazda called and said they had a spare car, and an empty race track. As if we’d say no. 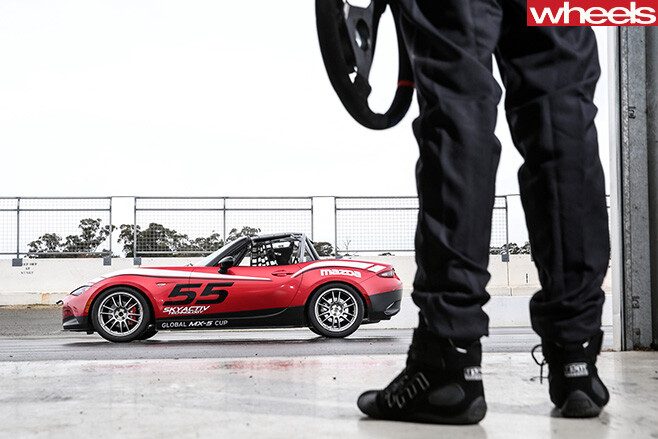 RIVALS
There’s really one – the racing version of Toyota’s 86, which costs roughly the same and has more grunt, but feels less special inside, sounds exactly four million times worse and races on R-Spec rubber, not slicks like the Mazda.

THE WHEELS VERDICT
How, and where, can we buy one? Mazda’s new baby racer is brilliant. Fun, grippy, nuanced and approachable, it promises to be an enjoyable, and potentially affordable, turn-key racer.

PLUS: Affordable (we think); brilliant fun (we know); raspy sound track; balanced chassis; improved driving position
MINUS: You can’t buy one, unless Mazda changes its mind 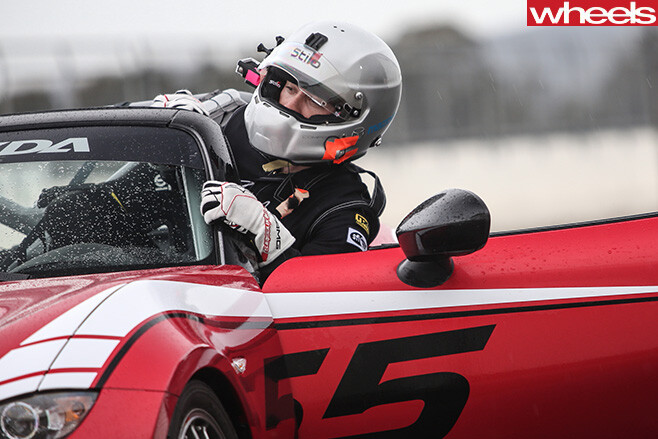 THE WHEELS REVIEW
STANDING in pit lane, staring at the small, serious-looking racing car in front of me as I clutch its detachable steering wheel, I realise I’m nervous. Not about actually driving it – I’m excited about that – but about what driving it might reveal. In theory, this should be one of the best cars Wheels drives this year. It’s the racing version of our reigning Car of the Year, so promises to take one of the most charismatic and enjoyable sportscars on sale, and dial everything up to 11. Sounds like a slam-dunk.

But as I thread myself into the cabin, which instantly feels more V8 Supercar than affordable two-seat roadster, thanks to its exposed, FIA-approved roll-cage, window netting and digital dashboard – there’s even shift lights! – a nasty voice whispers in my ear: “What if they’ve dialled out the fun? What if adding racing suspension and slick tyres has locked it down and stolen the Mazda MX-5’s magic?” 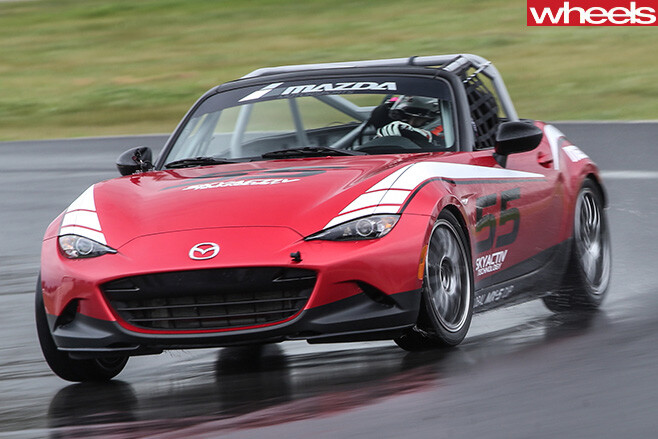 It’s enough to make me pause as I flick the ignition switches on the dash. Then the engine catches with a bark and my world fills with a raspy thrum. Nerves? Pah!

This is one of just two MX-5 Cup cars in the country, but worldwide others just like it have diced in tightly fought one-make championships all year. You can buy one in the US, where they’re made, for around $US55,000, which at today’s exchange rate means this car would land here for roughly $70K. 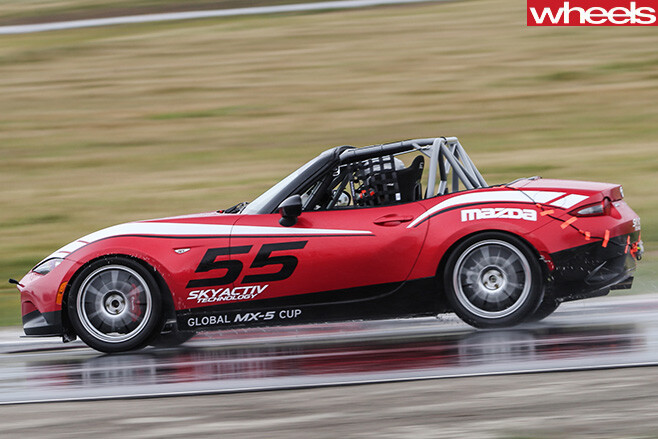 That’s double what the most expensive road-going MX-5 costs, so you’d probably expect a lot more power. Wrong. The Cup car’s 2.0-litre four-cylinder is the same unit wedged into the regular MX-5, only fitted with a sealed racing ECU and a stainless steel exhaust. Mazda says outputs have barely changed from the road car’s 118kW/200Nm.

It’s not much lighter, either. Sure, there’s no sound deadening or even a passenger seat, but that roll-cage is heavy. As is the upgraded cooling system, tougher brakes and other racing paraphernalia like the fire extinguisher and ballast box.  All up, the Cup car’s frame is 25kg lighter, meaning it hits the scales just shy of a tonne, sans driver. 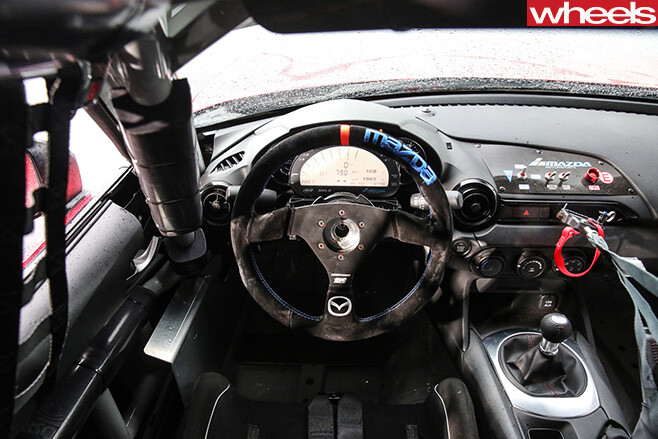 The most notable changes are felt in the suspension and tyres. Where the road car is softly sprung and rolls from turn to turn, the Cup car uses coil-overs and two-stage adjustable dampers to turn and grip much more aggressively. The slick tyres help here, and bring us to the fundamental handling characteristic of this car – there’s more grip than grunt. This isn’t a negative, the MX-5 is still capable of delivering a dopamine hit, but it does so in a different way to more powerful, even faster racing cars. Where others racing cars, and even very fast road cars, can feel like you’re riding a rabid dog that’s about to turn and bite you at any moment, you’re always the master in the MX-5.  So you emerge not stinking of sweat and relieved to be alive, but grinning like an idiot, knowing you’ve wrung every last drop out of the car, and yourself. 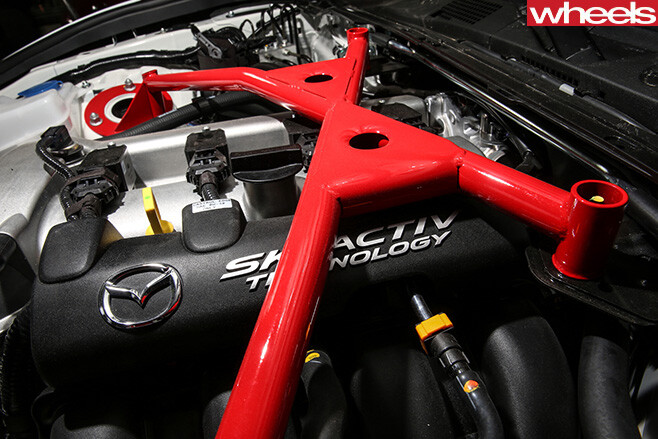 Better news is the realisation that despite its racing suspension and grippy tyres, the Cup car still has the inherent chassis balance and playfulness that we love so much in the regular MX-5. There’s also less assistance to the steering, so the tiller feels even more responsive, and the fixed back race seat is mounted lower which improves the driving position. The gearshift is sweet too, the pedals perfectly placed for some heel-and-toe action and the exhaust note isn’t only surprisingly loud, but deliciously rorty.

All this means the Cup car still feels like an MX-5, only better. And faster. And praise doesn’t get much higher than that.