After stretching it out to nine months, it’s time for Ponch to let the C63 go

After stretching it out to nine months, it’s time for Ponch to let the C63 go.

THERE’S one validation of a car’s greatness that isn’t always discussed, and that is the difficulty in saying goodbye. Like anything in your life, if you treasure your time together, separation smarts. Nine months in a twin-turbo Mercedes-AMG C63 S with ceramics and semi-slicks will do that to a person, yet I’m glad it has come to this. Mutual appreciation (I hope!) and a bond ’til the end of days.

What began as a slightly frosty introduction has grown to the point where I honestly feel like this Iridium Silver C63 S is mine. All mine, I tell you! I baby it like a doting father, parking it away from other cars in multi-storey lots, and as close to the gutter as possible in our narrow street without kerbing its star-spoke 19s. Admittedly, the front-right does have the odd small nick, where I’ve reversed in with lock on and ‘rested’ it on the gutter, but there are no scrapes to be ashamed of. And I’ve grown highly tolerant of the C63’s ride.

Our new digs (in yet another one-way street where everyone folds their mirrors in) is accessed via a mostly concrete-slab surface, and several of them don’t line-up properly. Not the AMG’s forte at all, yet its hard ride somehow cops the hits with dignity and integrity. Ditto the litany of speed humps populating my back way to the Sydney office. 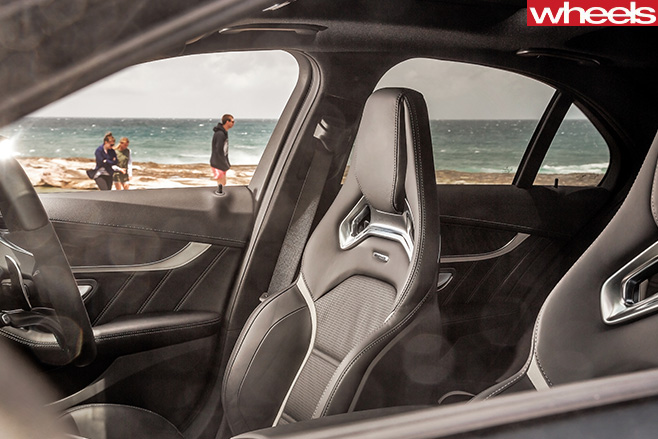 A hectic schedule has meant precious little time spent in the Benz over the last few months, but every time I clasp a doorhandle and hear it unlock, I’m reminded of how much I love the lightness of its aluminium doors (and the ‘thunk’ when you close them), the form-fitting support of its slim-backed sports seats, the terrific vision over its low cowl and ridged bonnet, the inherent rightness of the C-Class sedan’s overall size, and the deliciously anti-social rumble of its quad exhausts.

The C63’s cabin maintained its class and superb user-friendliness to the end, tempered slightly by a short-cushioned rear seat and the rather odd shape of its flat-bottomed, part-microfibre steering wheel. I frequently drove the C63 only touching the wheel’s leather bits, rather than dirtying its fluffy surfaces, and I often wondered why the hell you’d want a non-round wheel in a road car. At least my HJ Kingwood’s ‘oval’ wheel (with boomerang spoke shape) was designed to accommodate a beer gut.

I wasn’t necessarily won over by the C63’s ‘standard’ 13-speaker, nine-channel, 590-watt Burmester stereo. Despite being simple to use, with digital radio a constant companion throughout our time together, the Burmester didn’t live up to the sound quality promised by its gorgeous perforated-metal speaker grilles. An audiophile mate and I both agreed it sounded too ‘bright’, and dialling back the treble couldn’t fix it. The centre dash speaker also developed a trim buzz, though only if you cranked the volume (via either a wheel button or a brilliant metal barrel dial on the centre console, easily accessed by either front occupant). 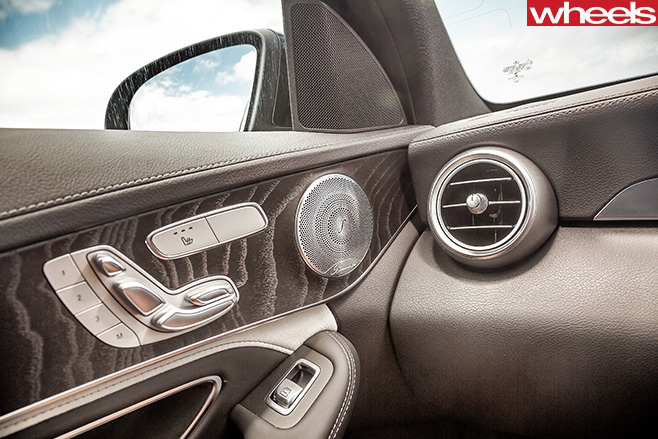 If you approach the C63 well aware that this is a highly focused sports sedan, not a cushy straight-line brawler, then its charms can’t help but get under your skin. It’s an impossibly hard car to fault – especially if you have a work fuel card, and don’t mind leaving its drivetrain in Sport – with the dynamic excellence and prodigious performance worthy of a modern AMG classic.

In full city gridlock, the C63’s thirst can be borderline fearsome (two tanks averaging 24.7L/100km and 25.2L/100km confirmed as much), though a more even mixture of urban motorway and city commuting levels the AMG’s thirst out at around the 13-15L/100km mark. Best of the lot over 4381km of enthusiastic motoring was a pair of 10s during my round trip to Dubbo a few months back (10.7L/100km on a fast four-hour blast back to Sydney being a commendable highlight). But if you really care about fuel economy, best avoid anything with an AMG badge. And ignore this car’s official combined number of 8.6L/100km.

In much the same way that the original Commodore was arguably the perfect size for a family sedan, the C63’s W205 Mercedes-Benz C-Class architecture makes it a four-door sweet spot. While the C’s short-cushioned rear seat appears to have been designed to steer punters into an E-Class if you’re chasing serious lounging comfort, there’s plenty of legroom back there, and at 1877mm wide (owing to its pumped guards), the C63 strikes a not-too-narrow, not-too-wide balance that suits our cities like a beer garden on a summery Friday arvo. It’s also reasonably trim length-ways (4750mm) but squeezes a leggy 2840mm wheelbase beneath. 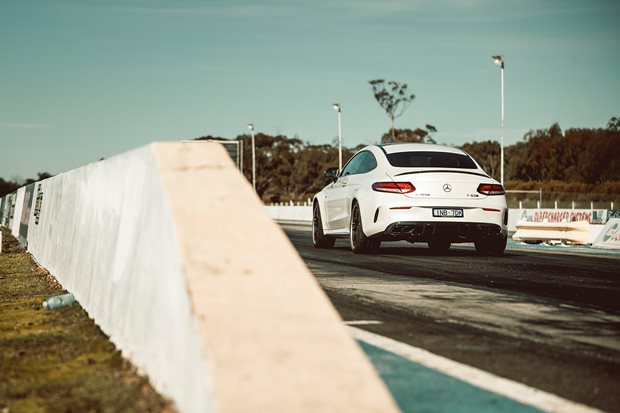 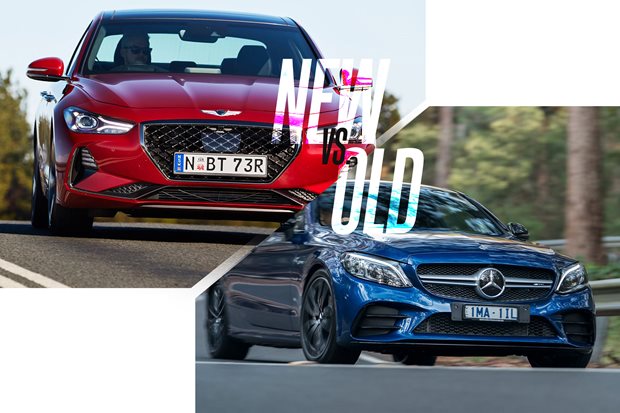