Holden’s Barina Spark replacement has jumped from class dunce to dux. It’s just a shame the price isn’t quite right.

Holden’s Barina Spark replacement has jumped from class dunce to dux. It’s just a shame the price isn’t quite right.

WHAT IS IT?
Holden’s newest entrant in the micro-car class; a sub-Barina sized-model that loses the confusing Barina Spark name of its predecessor, and brings Apple CarPlay and Android Auto connectivity to an end of the market that covets it the most.

WHY WE’RE TESTING IT
It’s an all-new design built on an all-new global platform, and has received extensive local development by Holden engineers in the keys areas of suspension, steering and ESC calibration.

THE WHEELS VERDICT
Proof of Holden’s engineering expertise is obvious in the engaging, composed dynamics, while the new engine makes it sufficiently lively and fun to drive. Nails the brief for equipment and connectivity, but while it’s definitely cheerful, it’s not exactly cheap. 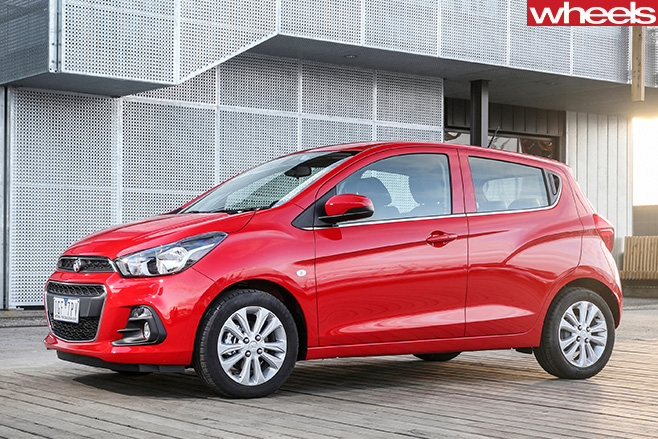 A QUESTION started to form in my mind as we were pushing the all-new Holden Spark around a properly challenging, hilly section coiled over one corner of Holden’s vast Lang Lang proving ground. When was the last time a model went from worst-in-class to the segment’s best, in the space of one generation?

It’s too early to say for sure if that’s the case for Holden’s new Korean-designed micro car, but the improvements the Spark delivers over its utterly unlovable and woefully underdone predecessor are vast. The outgoing model saw no local involvement from Holden, and it showed. This all-new car, built on a new global platform that brings both a longer wheelbase and wider track, has reversed that situation.

Holden’s engineers were involved from the first phases of development, and were able to specify a number of key component sets, as well as locally develop the damper tune, steering calibration and ESC characteristics. After a day of driving the little Spark hard at both Lang Lang and the surrounding roads, the dynamic benefits brought by Holden’s involvement feel significant.

The car was designed in Korea under the direction of former Holden designer turned General Motors International design vice-president Mike Simcoe, and is around 40mm lower than that its predecessor and with less front overhang. Yet it manages that trick of being roomier inside, partly thanks to the larger platform, and partly due to a lower hip-point and smarter interior packaging. 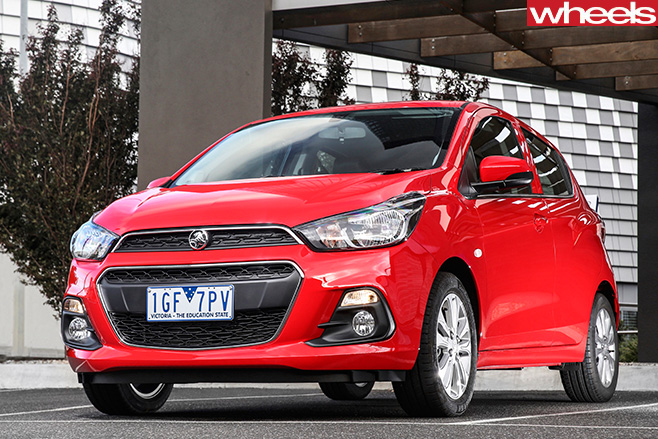 As for the styling, there’s a lot more going on in terms of surface detail, and far more character than a few of the slightly blobby, inflated-rice bubble competitors in this segment. The rear door handles are semi concealed, and open to a rear compartment that sits occupants quite upright on the short bench, but offers reasonable legroom and ample space for an adult’s head and feet.

Under that stubby bonnet, Holden has swerved around the downsizing trend, so rather than say, a little turbo triple, Spark gets an all-new 1.4-litre four. It’s an all-aluminium construction, but otherwise fairly conventional in terms of induction and valve train: there’s variable valve timing and port injection, with peak power of 73kW made at 6200rpm, and redlined at 6500rpm where the limiter is also pegged. Maximum torque is 128Nm (auto) or 124Nm (manual) at 4400rpm, so it does need revs, but shortish gearing means it doesn’t feel gutless. Throttle tip-in is eager but intuitive, the delivery pretty linear, and the top end, while not exactly creamy-sweet, is neither harsh nor horrible.

In the base car it’s mated to a five-speed manual with a super-light clutch pedal and feathery, if slightly floppy shift action, but the bulk of buyers – that’s mainly females aged between 20 and 29, if you hadn’t already figured it out – will opt for the CVT. It’s actually a decent auto, with defined ratio steps to avoid excessive engine droning or rev flaring. 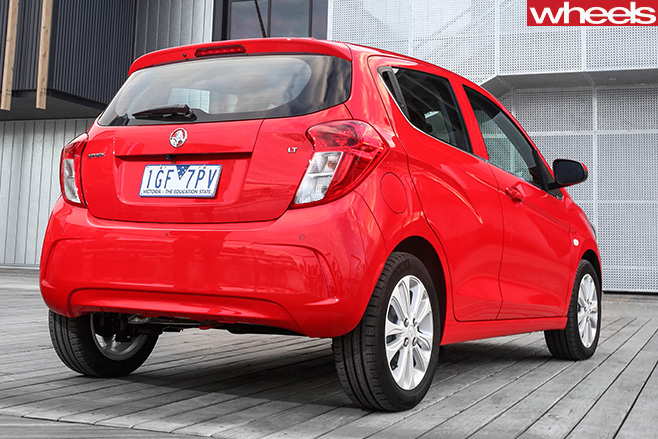 So the powertrain is good, but the dynamics are even more impressive. The steering has a nice, confident on-centre feel, and a natural, linear feel on turn-in. Work was done to add weight as lock is increased, but it’s still pretty light in the broader scheme. Mid-corner bumps don’t jar or see the wheel fighting your hands, showing the work done on damping really has worked.

Grip levels are modest from the Continental eco-biased tyres, (165/65 14 on the base model; 185/55 R15 on the LS) but it’s the chassis’s balance that compensates.  There’s a lively responsiveness and throttle adjustability that lifts Spark above the often one-dimensional dross that can inhabit this end of the forecourt.

The target market may never push it hard enough to find out, but subtle throttle lifts bring the bum into play and quells any sense of pushy nose-heaviness. On a wheelbase of just 2385mm, there’s the potential for this type of set-up to feel twitchy, yet it never does. Instead it just feels eager and up for it, and beyond the limit of grip waits one of the best calibrated ESC systems this side of Commodore. It doesn’t jump in too early, stays unobtrusive, and has an innate sense of when you’ve tidied things up and it can back off.

Pushed along typical country roads, it’s clear just how good the suspension tune is. Rebound control is a highlight, with big heaves and undulations soaked up with a level of composure you don’t normally find at this level. 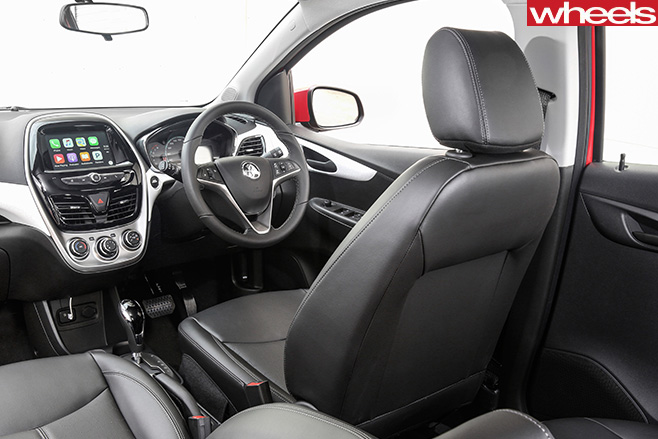 So, Spark drives with a level of verve and engagement that was nowhere to be found in its predecessor. It’s also got the showroom funk factor and the Millennium-generation must-haves in terms of connectivity. Only the value side of the equation looms as a potential issue. Holden reckons the car’s performance and equipment combination is sufficiently strong for it to carry what are premium price tags in what’s surely the most price-sensitive segment in the entire market.

The base manual look okay at $13,990 plus on roads, but most chickie-babes kicking the tyres with their pointy heels and dads in tow will want the auto, which, at $15,690, is suddenly closing in on a $17K drive-away tag. Move up to the auto-only top spec LT and you’re at $18,990 plus on-roads, which is in the thick of class-above action from the likes of Mazda 2, Ford Fiesta and Suzuki Swift.

The market’s reaction will determine how resolutely Holden sticks with this pricing strategy, and we’d tip that drive-away deals will start to sharpen the numbers later in the year. In the meantime, it’s just pleasing that Holden’s local engineering team have managed to deliver a Spark you no longer want to set fire to. 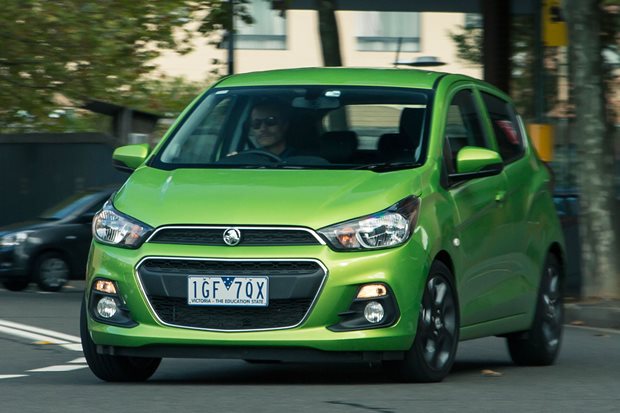 The Holden Spark is a tiny five-door hatchback that is easy to park, fun to steer, and drives surprisingly well on country roads. Smartphone apps display on its touchscreen. 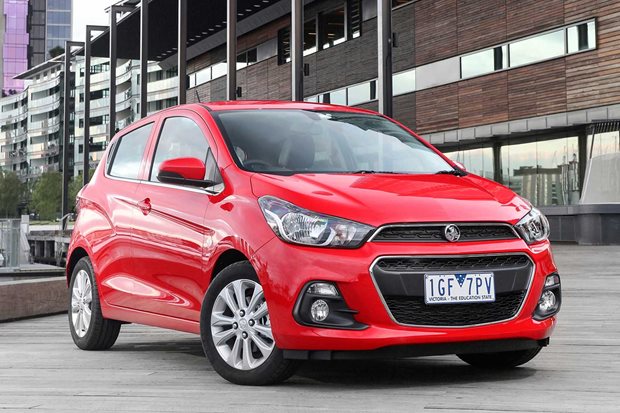 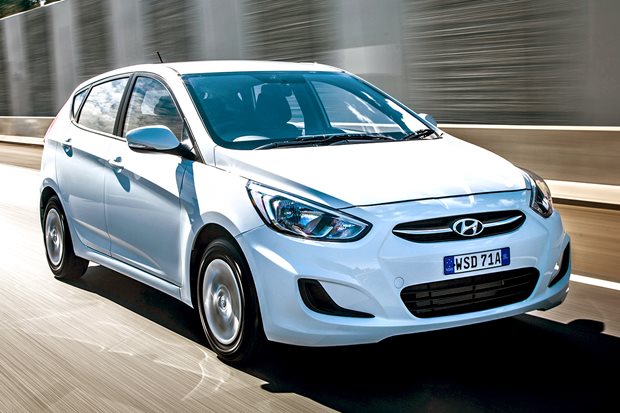