Merc takes the angle grinder to its C-Class Coupe

Merc takes the angle grinder to its C-Class Coupe.

WHAT IS IT?
The first ever C-Class convertible. Mercedes has taken the angle grinder to its hulking C-Class Coupe, which now sports a rather excellent folding soft-top that can be opened or closed in 20 seconds. It’s a looker too, especially in more aggressive AMG guise.

WHY ARE WE DRIVING IT?
To see if lopping off the C-Class Coupe’s roof has heightened the driving experience, or ruined it with sloppier dynamics and a heftier kerb weight. 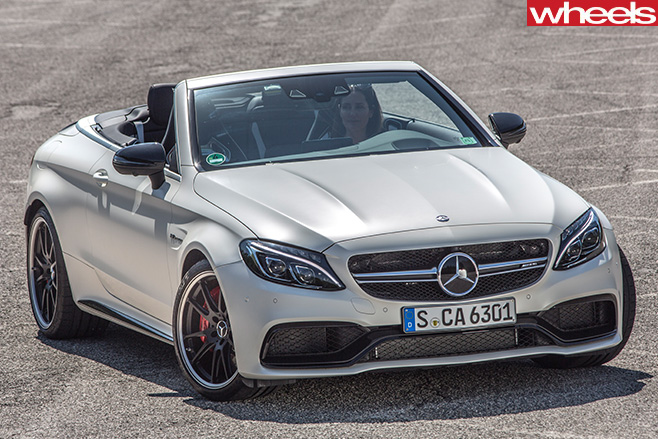 THE WHEELS VERDICT
Rag-top C-Class manages to avoid most of the usual convertible pitfalls. Its handling is composed, engines are strong and in the beauty stakes, it easily outshines its German competition.

THE WHEELS REVIEW
IT IS, or I should say, it was, the perfect place to launch a new convertible. I’m in Italy, in the middle of summer on the coast, where the winding roads flirt with the sea and it’s… raining. Like properly, “Noah get your ark!” raining. It’s a shame because before me lies an AMG C63 S Cabriolet, and it looks brilliant.  Aggressive, stylish and elegant all at once, it shares the C-Class Coupe’s flared arches, angular nose and tough stance on staggered, deeply dished alloys, but dropping the roof adds an extra splash of class. 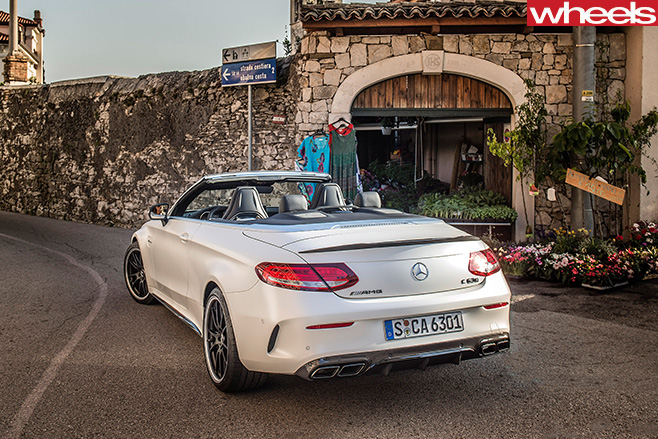 Promises to go like stink too. Under those bonnet scoops lies AMG’s 375kW/700Nm twin-turbo V8, which is a welcome reminder to treat the throttle with respect on slippy roads.

Believe it or not, this is the first time Merc has offered a cabriolet version of its venerable C-Class. The CLK plugged the gap for a while, but no ragtop before this has worn a dedicated C badge.

Like the Coupe on which it’s based, Mercedes is positioning the Cabriolet as a sportier option for younger buyers, with all versions offered with the AMG line as standard in Australia, which brings bigger wheels and a more aggressive body kit.

We also score a thicker ‘acoustic’ version of the cloth roof, which can be opened or closed in 20 seconds at up to 50km/h.

Four variants are coming to Australia, two tweaked by the boffins at AMG. Regular versions include the entry-level 200 and mid-spec 300, both powered by a 2.0-litre turbo four producing 135kW/300Nm and 180kW/370Nm respectively. 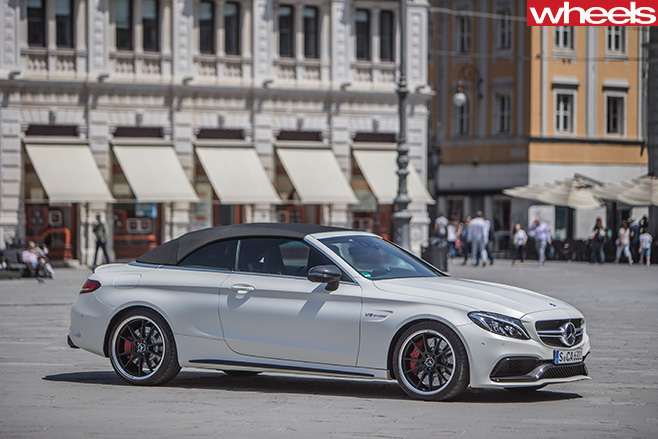 AMG-wise, the range starts with the four-wheel drive, V6-powered C43 and taps out with the C63 S. Here, power is still sent solely to the rear axle, a fact all too obvious on wet Italian bitumen. Gentle prods of the throttle send the traction control light into blinking fits, but even in these sodden conditions the C63 feels trustworthy. The cabrio version has the same wider tracks and sophisticated multi-link rear suspension as the C63 Coupe, and the dynamics are predictable with excellent road holding.

Lopping off the roof has made the cabrio around 125kg heavier than its hardtop sibling, and while the extra heft does blunt the C63’s cornering and braking slightly, it remains a seriously fun car to drive quickly.

Mercifully, the rain eases and I do score some dry running in the C43 and C300 (no 200s were available to test).

The C43 mightn’t score the blistered arches and menacing stance of the C63, but its 270kW/520Nm twin-turbo V6 ensures it feels a proper part of the Affalterbach family. 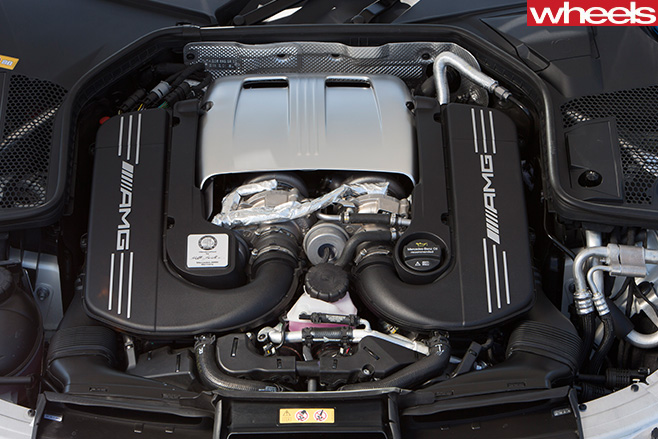 It has oodles of grip too, thanks to four-wheel drive with a 31:69 split, but while this initial taste is promising, it doesn’t feel as playful or as engaging as the C63.

The most enjoyable drive of the day, though, is delivered by the C300. Our test car rode on optional air suspension and the ride, on smooth Italian roads and 19-inch wheels, is plush and nicely controlled. The 2.0-litre four matches the Cabriolet’s character perfectly too, with a muscular mid-range, rorty note and gutsy performance.

Then there’s the open-air refinement. Drop the roof in any cabrio variant and there’s very little wind noise, even at speeds up to 140km/h.

Inside, the Cabrio’s cabin mirrors the rest of the C-Class range for design and quality materials, as well as Benz’s list of standard safety equipment. The only real interior gripes go to the inevitable loss of luggage space required to fit the folding roof, which drops to 360L with the roof up, or 285L with it down. The rear pews aren’t exactly roomy either, and although the seats themselves are comfy and there’s a good amount of toe room, taller passengers will brush their heads on the cloth roof.

Even so, there’s no denying the Cabriolet mounts a fairly convincing case. The body structure is strong, the styling attractive and no variant feels like an overly compromised or spoiled version of the Coupe. And that’s high praise for a ragtop. 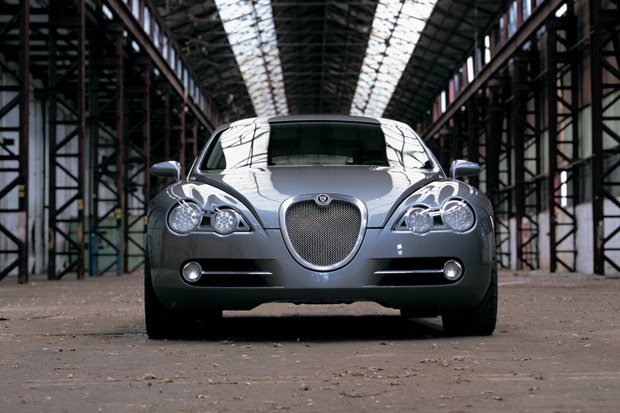 Jaguar rules out rival for Mercedes A-Class, will focus on SUVs

Jaguar says it won’t be building a British rival for the popular Mercedes-Benz A-Class and Audi A3 hatchbacks in the near future, as it turns to SUVs to drive sales volume 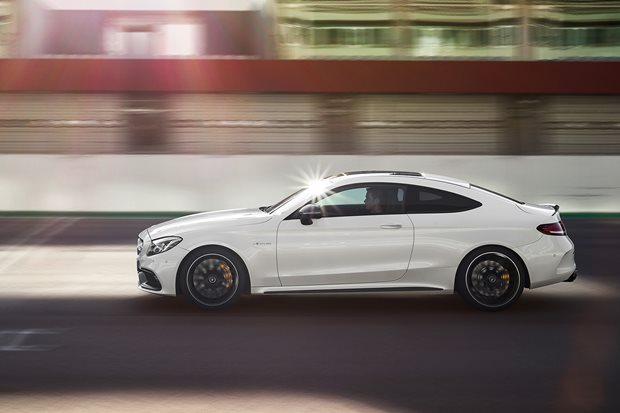 Mercedes has given us a first taste of the fastback two-door that will take on the Audi RS5 and BMW M4, releasing images of the C-Class Coupe in its most powerful form 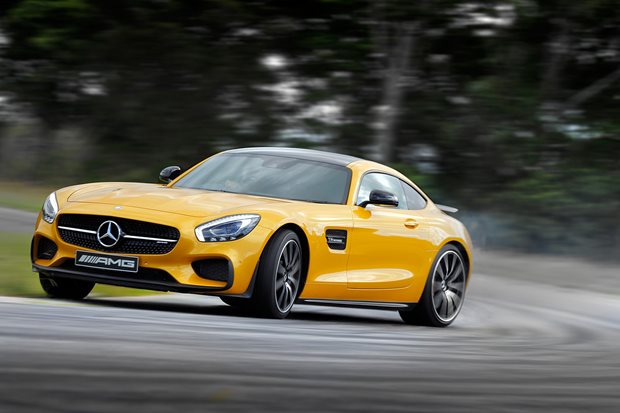 How quick can you lap Mount Panorama in a near-stock example of the latest Mercedes hot-rod? Take a ride with racing great Bernd Schneider