ONE of the past year’s more intriguing revivals was the Suzuki Vitara nameplate, this time adorning a car-based small SUV. While it is stylish, spacious, and smooth, a shortage of grunt has disappointed – so the new Turbo is welcome indeed.

WHAT IS IT?
The latest Vitara ditches all preceding versions’ separate-frame construction for a monocoque body, putting the Suzuki squarely in Mazda CX-3 territory. And there’s much to like about this small SUV, even if stronger performance has been called for. The Japanese have been listening, hence the powerful and torquey S Turbo.

WHY WE'RE TESTING IT
The small SUV segment is booming, with the Mazda CX-3 leading the charge and many rivals, Suzuki among them, seeking a bigger slice of the sales cake. The Vitara launched last year has had a strong start, but the Turbo promises to broaden its appeal by offering significantly better performance. Here we look at the expected best-selling S Turbo 2WD at under $30K. 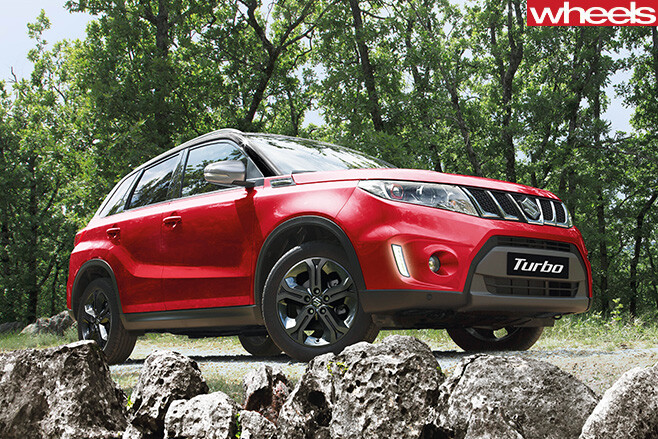 THE WHEELS VERDICT
WHILE the bottom-end Vitara RT-S models made sense with their highly competitive pricing and generous specification, the better-equipped RT-X versions suffered because they offered no more performance, especially in the heavier AWD variants. Now Suzuki has launched the S Turbo in both front-drive and AWD guises, adding a deliciously sweet and punchy automatic powertrain to help justify the extra outlay. With forced induction, the Vitara now steers better too, though the ride remains on the firm side and the lack of driver-assist tech and unavailability of manual gearbox are disappointments. Still, the Turbo elevates the range enough to give the top three small SUVs (Mazda CX-3, Honda HR-V, and Renault Captur) a real scare. 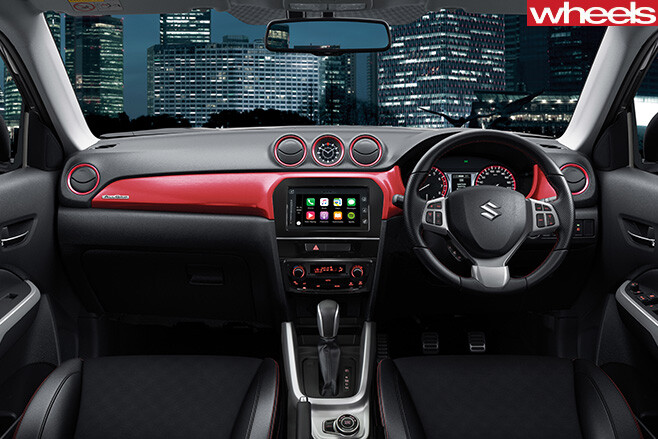 It could have owned the small SUV segment, but for a firm ride, an expensive AWD variant, and a shortage of low-down torque.

Enter a box-fresh 1.4-litre turbo. Conceding nothing in terms of refinement to the continuing 86kW/156 1.6 in the base RT-S, the 103kW/220Nm ‘Booster Jet’ four-cylinder installation is like that first scene in the Bradley Cooper film Limitless after he’s popped the pill: it simply enhances everything. In relatively lightweight (1160kg) S Turbo 2WD guise – the leading Mazda CX-3 sTouring equivalent is 66kg heavier – the blown Vitara at last lives up to its name. It leaps off the line from low revs (suffering only minimal turbo lag), belts along like a boss, and will bound forward energetically at just a blip of the accelerator. This is a surprisingly speedy point-to-point urban runabout, with real fire in its belly.

Aided by a handy pair of paddleshifts (though the transmission upshifts automatically approaching the redline), the effortless performance is everything the atmo version’s isn’t. This savvy little slingshot is a super-smooth torquer, with low fuel consumption to match. If there is consumer demand for it, an S Turbo manual is waiting in the wings. Fingers crossed.

Additionally, the new-gen powertrain seems to have subtly altered the Vitara’s steering characteristics, removing what was a slight stickiness, for a more linear and consistent feel. However, while the chassis’s high grip levels remain, some torque-steer tug is evident on wet roads, while the helm still isn’t quite as sharp or responsive as we’d like, with insufficient weighting or feedback. Here the CX-3 can rest easy. As with the Mazda the ride can be jittery, but isn’t harsh, perhaps because of the quality Continental 215/55R17 rubber. Note that, as before, the ESC calibration is a tad sluggish reacting over gravel.

Elsewhere, the S Turbo is business as usual, with that fine (if quite plasticky) interior now gaining Apple CarPlay and Android Auto. Too bad Autonomous Emergency Braking isn’t offered in an otherwise modern, techie, small SUV, however.

All up, the Booster Jet finally puts value in the handsome top-end Vitaras, elevating the series to possible class-leading contention. Especially when you put your foot down.