WHAT IS IT?
The most adventurous variant of Volkswagen’s most popular model globally, the mid-sized Passat – this time built on the latest, eighth-generation wagon.

WHY WE’RE TESTING IT
This trail-loving version of the Passat has just arrived in Australia. And notionally anyway, it’s a good match for Australian touring conditions. 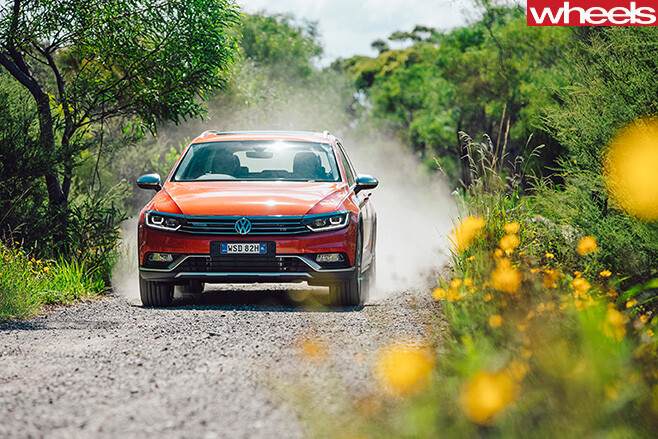 MAIN RIVALS
Fellow jacked-up wagons such as the Audi A4 Allroad, Subaru Outback, Skoda Octavia Scout and Volvo XC70… and just about any similarly priced SUV.

THE WHEELS VERDICT
One sentence: Even in the dirt, the Volkswagen Passat Alltrack retains that Passat polish. 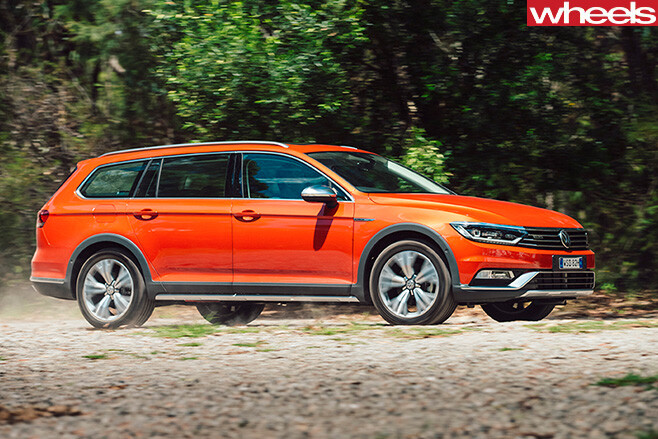 THE WHEELS REVIEW
Subaru’s Outback, a Liberty on stilts, has been kicking up dust for a successful couple of decades. Yet while Volvo followed not long after with the XC70, there’s been only an incremental increase since in similar high-riding estates.

Volkswagen didn’t come around to liking the idea until 2011, though unlike Subaru and Volvo it wasn’t willing to drop the nameplate of its biggest-selling model globally when it introduced the Passat Alltrack variant.

And now we have the second iteration, applying the same formula of rugged looks and light off-roading capability to an even more impressive donor model – the eighth-generation Passat, which was a 2016 Wheels Car of the Year finalist.

Obvious exterior changes over a regular Passat wagon, besides the Alltrack badging, include the aluminium-look scuff plate at the front, matt-black body trim front and back, extended sills, roof rails, exclusive 18-inch Kalamata alloy wheels, and of course that extra ground clearance (raised 28mm to 174mm). 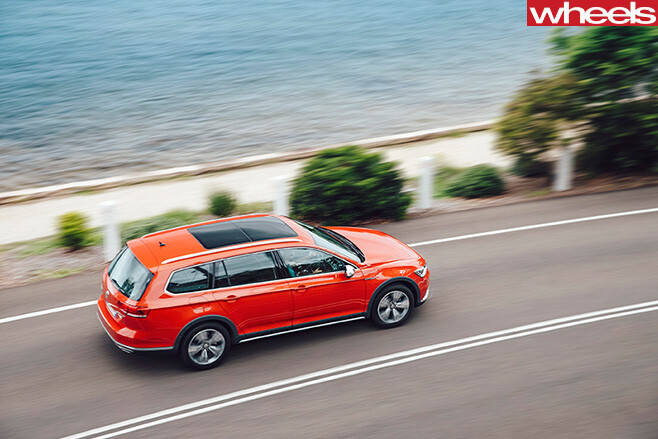 There’s increased underbody protection, and the Alltrack is the only Passat with 4Motion all-wheel drive.

This AWD system is predominantly front-wheel drive, adding torque to the rear axle as required via a fast-acting electro-mechanical multi-plate clutch.

It’s certainly effective on dusty trails and loose-surface tracks, endowing the Alltrack with strong traction even under hard throttle out of tight bends.

Combine that with the higher ride and a 2200kg braked towing capacity, and you have a Passat that seems match-fit for country Australia. Oh, and there’s an Off-road mode that retards throttle response, recalibrates the ESC and ABS, and introduces a hill-descent-control function on gradients of 10 degrees or steeper. 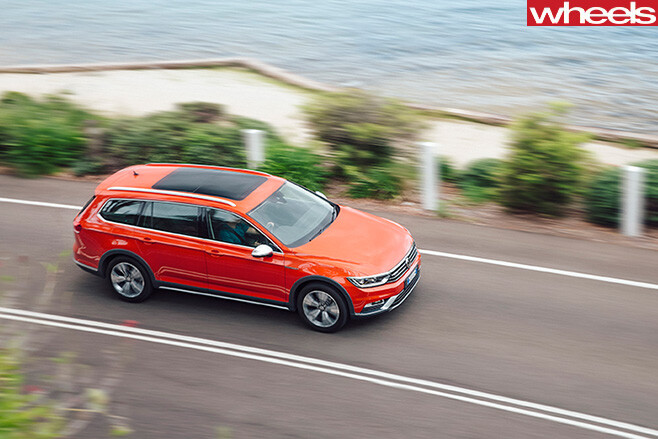 The Alltrack’s Continental tyres also have a special inner skin that’s designed to resist common punctures, such as those caused by small nails.

The rubber is fairly noisy on coarse-chip surfaces, but that’s about the only thing that disturbs the otherwise excellent cabin refinement. From the inside there’s no unwelcome clatter from the 2.0-litre, four-cylinder turbo diesel, the only engine offered with the Alltrack locally.

The diesel is not quite as effective as it is in the regular Passat, though. The Alltrack’s all-paw hardware and extra helpings of bodywork add 107kg to the 140TDI wagon’s mass, taking its toll on acceleration (down a tenth to 100km/h) and fuel economy (officially an extra 0.6L/100km). There’s noticeable lethargy at low revs – not eradicated by selecting the available Sport mode – before the turbo spools up to present the Alltrack with a mid-range to match its beefy aesthetics.

A Passat 132TSI sedan could also almost be called agile in comparison, but despite some body roll the Alltrack remains decently poised along fast, flowing curves.

And while the suspension may be slightly modified, there’s no change to the Passat’s reputation for bump-blotting ride quality.

The all-wheel-drive set-up robs the Alltrack of just 11 litres of cargo capacity. Its status as a classically practical wagon is guaranteed by a 639-litre boot that can be extended to 1769 litres by folding the 40-20-40 rear seats. A $49,290 starting price also only asks a $1300 premium over the 140TDI wagon, continuing the good-value approach to the overall range. The only option is a $3500 Luxury Pack that includes LED headlights with integrated DRLs, semi-automatic parking, panoramic sunroof and a chrome grille strip.

With it or without, the Passat Alltrack makes a convincing alternative to similarly priced luxury SUVs, for those seeking a comfortable and capable vehicle for the open road and open spaces.