The new Audi R8 loses its head, and we test if it remains as brilliant as ever.

The new Audi R8 loses its head, and we test if it remains as brilliant as ever.

WHAT IS IT?
The soft-top variant of the second-generation Audi R8 supercar. Shares the fundamentals – aluminium and carbonfibre spaceframe chassis and 5.2 litre V10 engine – with VW Group brand sibling Lamborghini.

WHY WE’RE DRIVING IT
We know the coupe – in both standard and Plus guises – is a sizzling drive. So by what degree do the Spyder’s compromises – less rigidity and more weight – affect this ability? Oh, plus the drive program took in some magnificent roads in the hills above Spain’s Costa Brava, so churlish to say no. 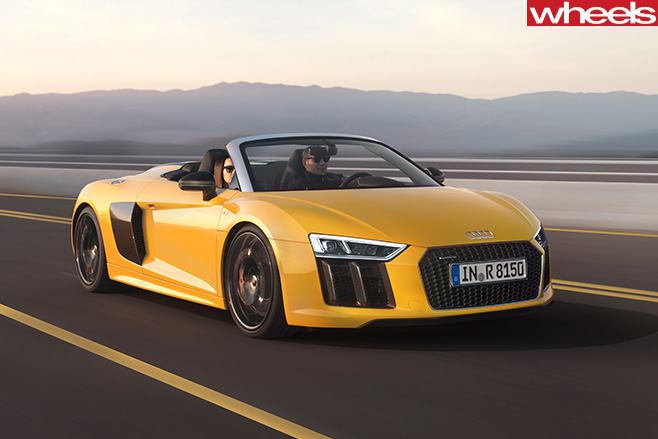 THE WHEELS VERDICT
Capable of delivering outstanding supercar duality of character: hushed cruiser with the roof up; barking, corner-blazing animal when the opportunity presets itself. 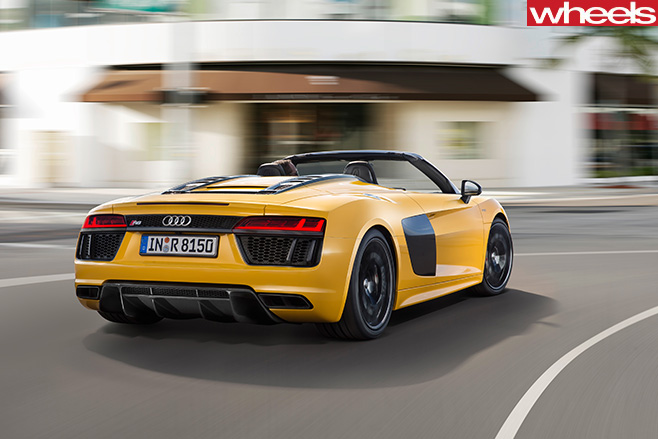 THE WHEELS REVIEW
THERE’S a figure that’s arguably more impressive and relevant than the 0-100km/h time for Audi’s new R8 Spyder. (Okay, it’s 3.6sec; 0.2s slower than the coupe, to save you checking.)

That figure is the number of seconds it takes the Spyder to transition from hushed, almost coupe-quiet cruiser, to barking, belching backroad blitzer. A mere 20, and it’s happy to do it at up to 50km/h, with the press of one button for the roof, and one button to remap all key vehicle parameters to ‘stun’. 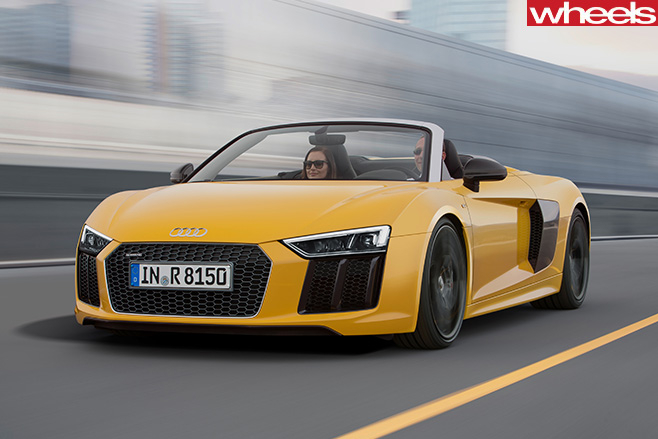 Yes, this is a car with plenty of bandwidth. One minute it’s wafting in sun-seeking costal-cruise mode, the next, it’s cracking cliff faces as the 5.2-litre V10 engine bellows well past 8000rpm. Of course, measured objectively against the coupe, it’s heavier, blunter, less rigid and slower. But to reduce it to those terms feels a big like stating that the Rolling Stones are older and not as loud as the Kings of Leon, and therefore you’ll enjoy the show a lot less. Of course the coupe is the purists choice, but the Spyder still knows how to rock. 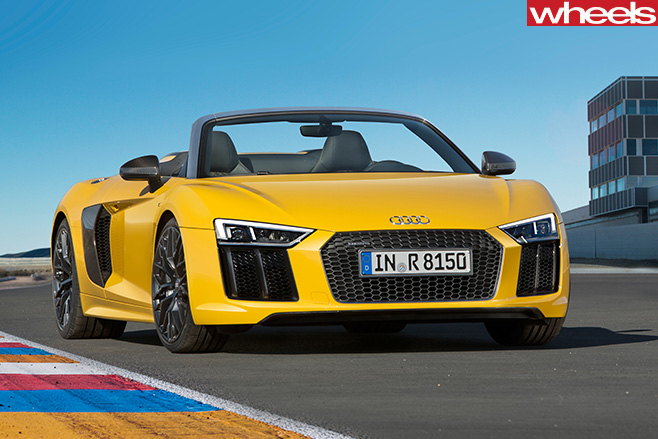 The rigidity-loss issue is addressed first by the fact that the spaceframe shared by both coupe and Spyder is an enormously stiff aluminium and carbonfibre structure to begin with. The Spyder gets thicker, more flex-free side rails and beefed-up A-pillars. Aussie roads will be the real test, but we struggled to find anything beyond the odd tiny quiver of rear view mirror and header rail. Roof up, there’s a little more tyre noise than the coupe, but on a light throttle and without the standard sports exhaust in full-fruit mode, it’s effortlessly quiet and relaxed; supple and serene. 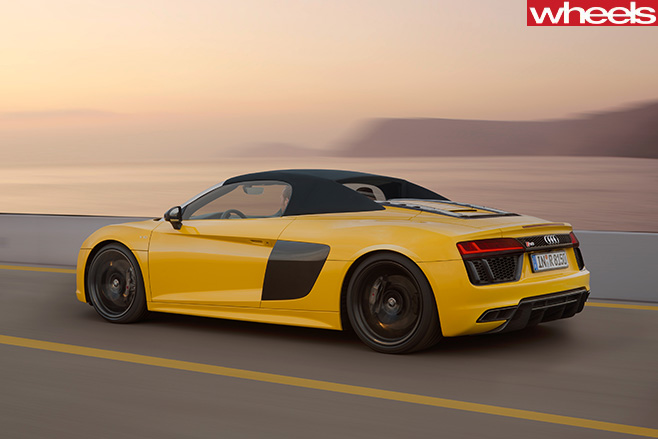 Then down comes the canvass roof to be stowed below the carbonfibre decklid, and a chance to call up an Individual setting of the Drive Select system that locks in Dynamic for engine, suspension, quattro, and exhaust. Leave steering in Comfort unless you want unnecessary weight to blunt the delicacy. Then let rip. Oooh, yes. The Spyder is a chunky unit at 1795kg, but on optional 20s with big Pirelli boots and the optional carbon ceramics fitted to our test car, it’s still pretty agile and plenty engaging. Even better when switched into Dry mode via the three-mode Performance button on the wheel. This gives an even more aggro mapping to engine and gearbox, and pushes over 80 percent of torque rearward, and loosens the hold of the ESC system. 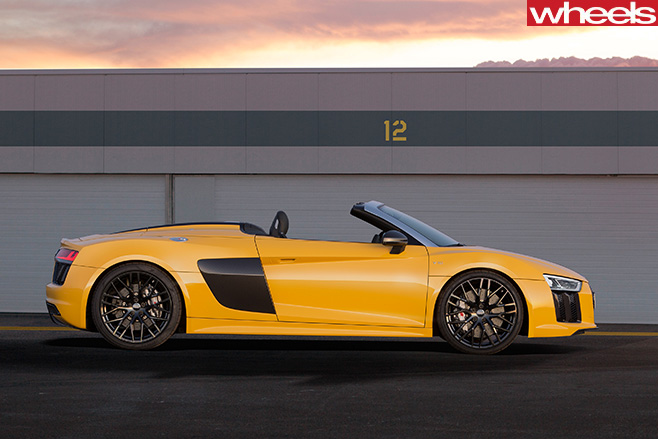 Yes, the V10 is ‘peaky’ by rivals’ twin-turbo standards – max torque is at 6500rpm – but anything above 5000rpm out of second-gear corners is enough to get the rear-end loose, and the laser-edged throttle response makes it a pleasure to add to or subtract from the tyres’ purchase.

In a crowded segment bristling with talent, the R8 Spyder makes its case not on raw numbers, but surely with what really matters to buyers: sublime quality, shedloads of accessible performance, a thrilling engine note, but also the ability to chill out and catch a few rays on days off.