Ingolstadt replaces the sleek Audi S5 with a brawnier second generation car that improves the original in virtually every objective regard. Whether you find it prettier or more charismatic is a decision you’ll need to make.

A 260kW all-wheel drive coupe with a huge breadth of talent, the latest Audi S5 will put its German rivals on notice. It’s a smart munition delivered straight to the crosshairs of its target market. The only people likely to be disappointed are those hoping it to be a cut-price BMW M4. 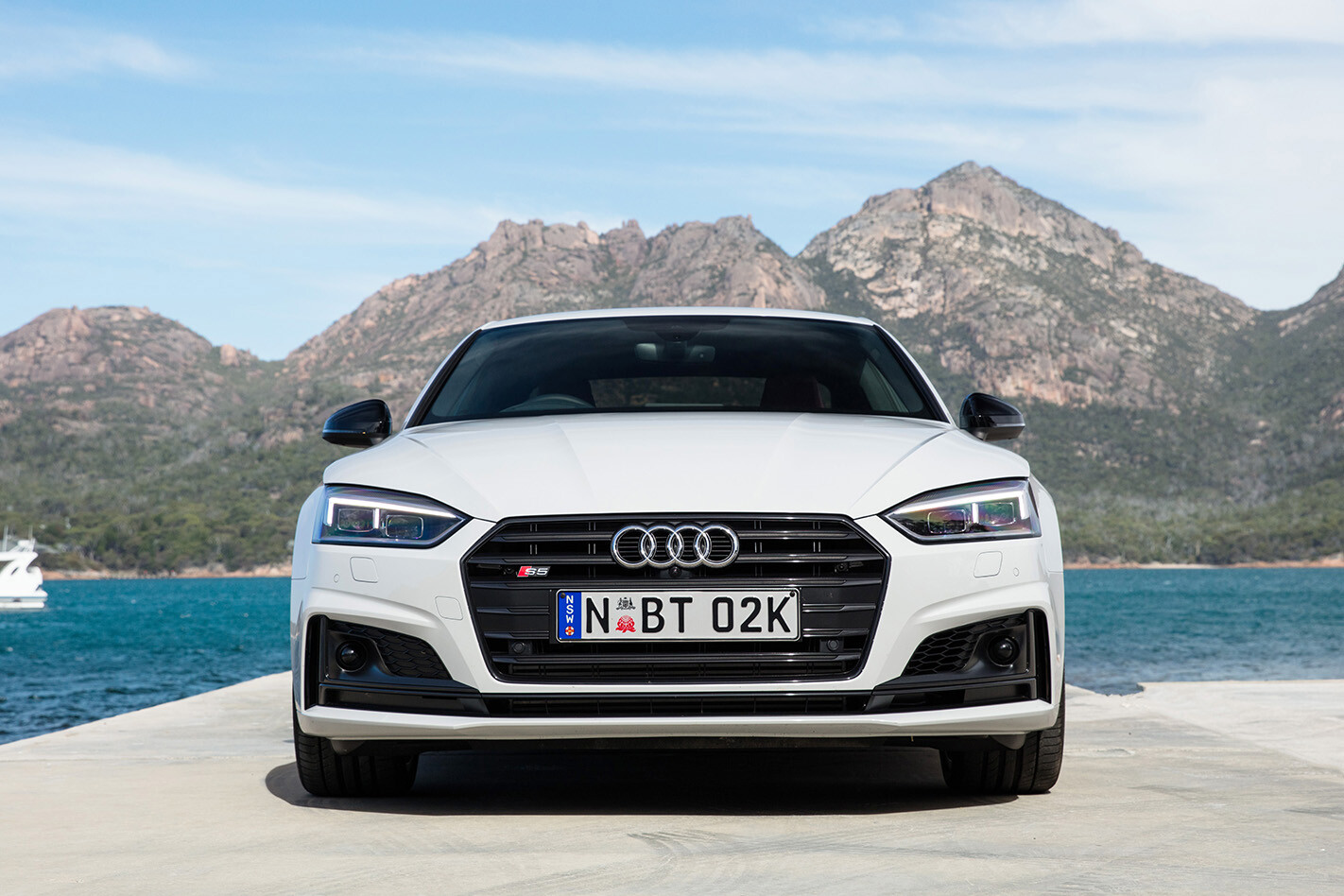 With some of the more tortuous bits of the Targa Tasmania route on hand, it’d be remiss of us not to treat the S5 to the most demanding test Australian roads can deliver. Audi also had the A5 coupe range to add some welcome perspective. Audi is intimately acquainted with the customer base for the S5. It’s a clientele with an affinity for quality, design and a gnawing weakness for one-upmanship, for which this latest generation car unerringly hits the mark. Fast, composed, and beautifully built with a refreshingly discreet technology package, it’s a strong offering. Cutting $17k off the old car’s price to bring it into line with the Mercedes-AMG C43 coupe isn’t going to hurt the S5’s chances either. Appreciating the Audi S5 requires but one thing and that is to accept that this 260kW all-wheel drive sports coupe doesn’t give its best when scruffed through a corner at ten-tenths.

Nobody who buys an S5 will drive it like this, yet legions of journalists have used its unconvincing impression of a Mitsubishi Lancer Evo as a means to pigeonhole the old car as something less than the real deal. The latest S5 demonstrates that Ingolstadt understands its target market and has clinically engineered a smart weapon to surgically part people from $105,800 of their hard-earned.

The styling is evolutionary, taking Walter de Silva’s magnum opus of lantern-jawed loveliness and chamfering a few curves into edges while implanting a few more Y chromosomes. It’s an in-house effort described by Audi designer Jakob Hirzel as “not exuberant.” The sharply-defined ‘tornado line’ along the side, cleverly initiated by the shutline of the clamshell bonnet, is the car’s most defining feature, that bonnet also featuring a moderately exuberant power bulge to help differentiate the three-litre V6 S5 from its proletarian four-pot brethren.

That engine certainly cranks out some impressive numbers. Delivering 500Nm from just 1370rpm via an eight-speed ZF automatic, it’ll punt the S5 through 100km/h in 4.7 seconds yet somehow there’s the unwelcome taint of responsibility about it. Audi will quote a fuel economy figure of 7.5L/100km - marginally better than our test figure of 16.9L/100km – but you’ll still struggle to resist boring your passenger witless about how the old 4.2-litre V8 was more fun. With a turbocharger mounted inside the 90-degree V6, the latest engine is a step-down in character from the last supercharged V6, lacking that car’s banshee top-end histrionics, but it’s an undeniably effective powerplant. Supple and leggy, it works beautifully with the tiptronic auto, although it would be good to be able to separate the throttle characteristics from the gearbox aggression, which can be a little over-eager to kick in a mid-corner upshift when the Drive Select system is set to Dynamic mode.

A lot of work has clearly gone into polishing the all-new five-link suspension of the S5, with genuinely impressive ride quality even when the adaptive dampers are switched into their most aggressive Dynamic mode. 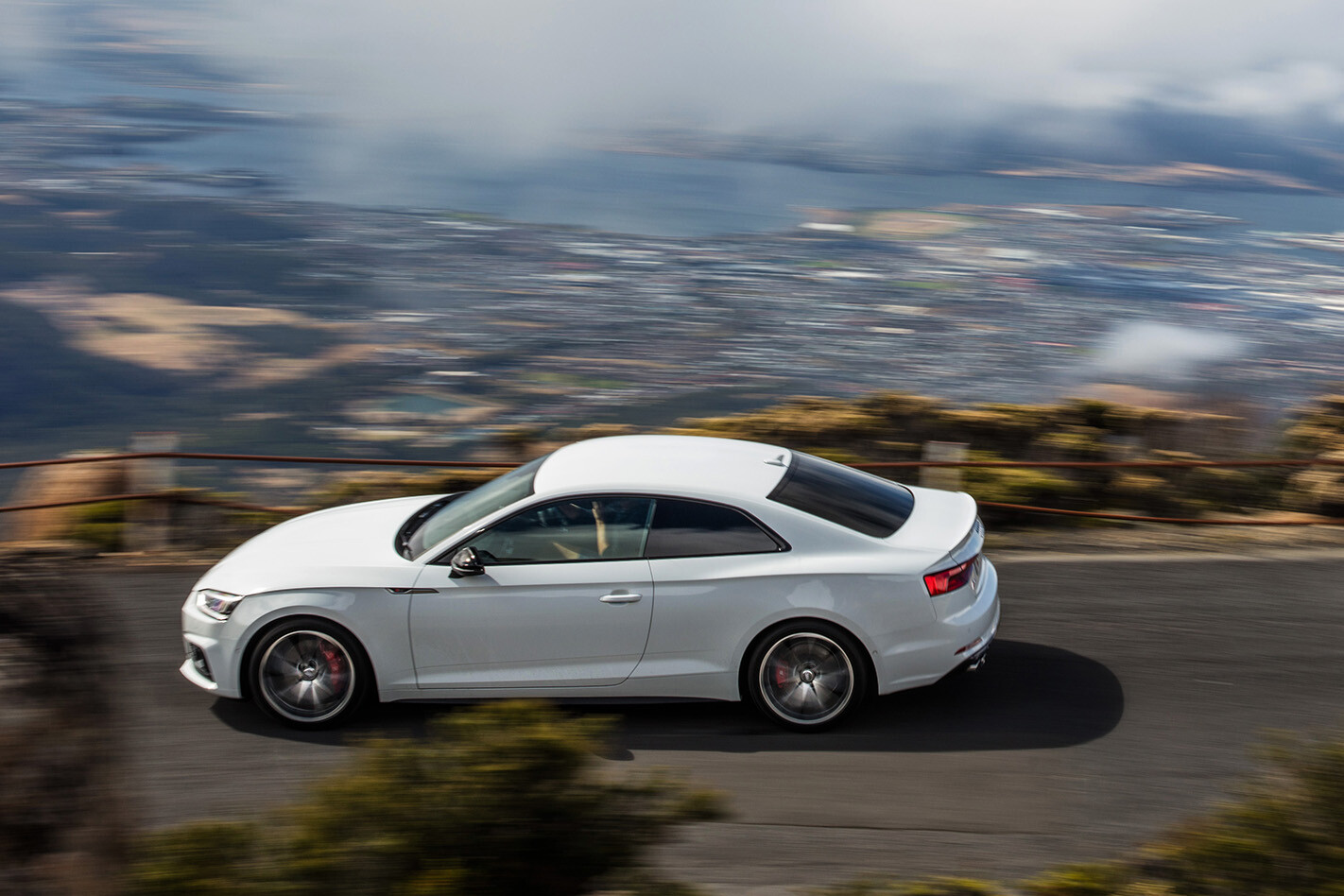 The effectiveness of the front end was thrown into sharp relief by a back to back comparison with the A5 2.0 TFSI quattro model, which pattered badly under braking on scabby surfaces, sending the car’s electronics into neuroses. The S5, by comparison, remained rock steady under braking, with excellent pedal feel and sharp turn-in.

The optional $2950 Audi sport differential was fitted to all test cars and should be a standard fit item, delivering extra grip out of corners to the rear wheel best able to deploy it. The S5’s nominal torque split is 40:60 front/rear, and in the event of slip, up to 85 percent of drive can be directed forward or 70 percent aft.

The interior, perhaps surprisingly for an Audi, was one of the few areas where it was possible to pick holes. It’s bigger than before, with a few more thoughtful touches, such as the variable height, robot-fed seatbelts, but a carbon-fibre fascia in a GT car is a rare cloth-eared move from Ingolstadt.

Siting the Drive Select switch on the fascia low and to the far left is evidence of a lazy right-hand drive sign off and while the quality of materials was excellent, every S5 we tested fitted with the optional Bang and Olufsen 3D stereo system suffered from rattling door speakers. It’s hard not to suspect that the S5 represents a forensic exercise in box-ticking. Seeing the two cars, old and new sitting alongside each other, I couldn’t help think of the 2003 remake of The Italian Job.

Compared to the original, the crooks stole $35m worth of gold versus $4m, it ran for 111 minutes as opposed to 99, it grossed far more at the box office and many, many more bloody doors were blown off. It was an objectively superior exercise in virtually every regard. Yet the magic had gone, and the same accusation can be levelled at the judiciously effective S5. Despite that, Audi is unflinchingly confident that S5 buyers don’t believe in magic.

It may well be right.