THE Ford EcoSport has undergone a mid-life refresh that takes some of the hard edges off the model it replaces.

The EcoSport is the smallest SUV in Ford’s Australian showroom. It has a fight on its hands; there are more than 20 brands exchanging blows in the sub-$40K SUV segment, with just two models – the Mazda CX-5 and the Mitsubishi ASX – accounting for almost two in every five sales this year. EcoSport has accounted for only one in every 10. A mid-life refresh for the EcoSport brings better looks, and more importantly for Ford’s target customers, an automatic option for its volume-selling model and an interior that’s much more attractive to its target buyers – couples stepping into their first new-car experience, and downsizing empty nesters.

Changes made to the exterior and interior of the Ford EcoSport, and more under the bonnet, improve the breed. But the game has moved on since 2013, and the EcoSport is still a long way off catching up with the pack. 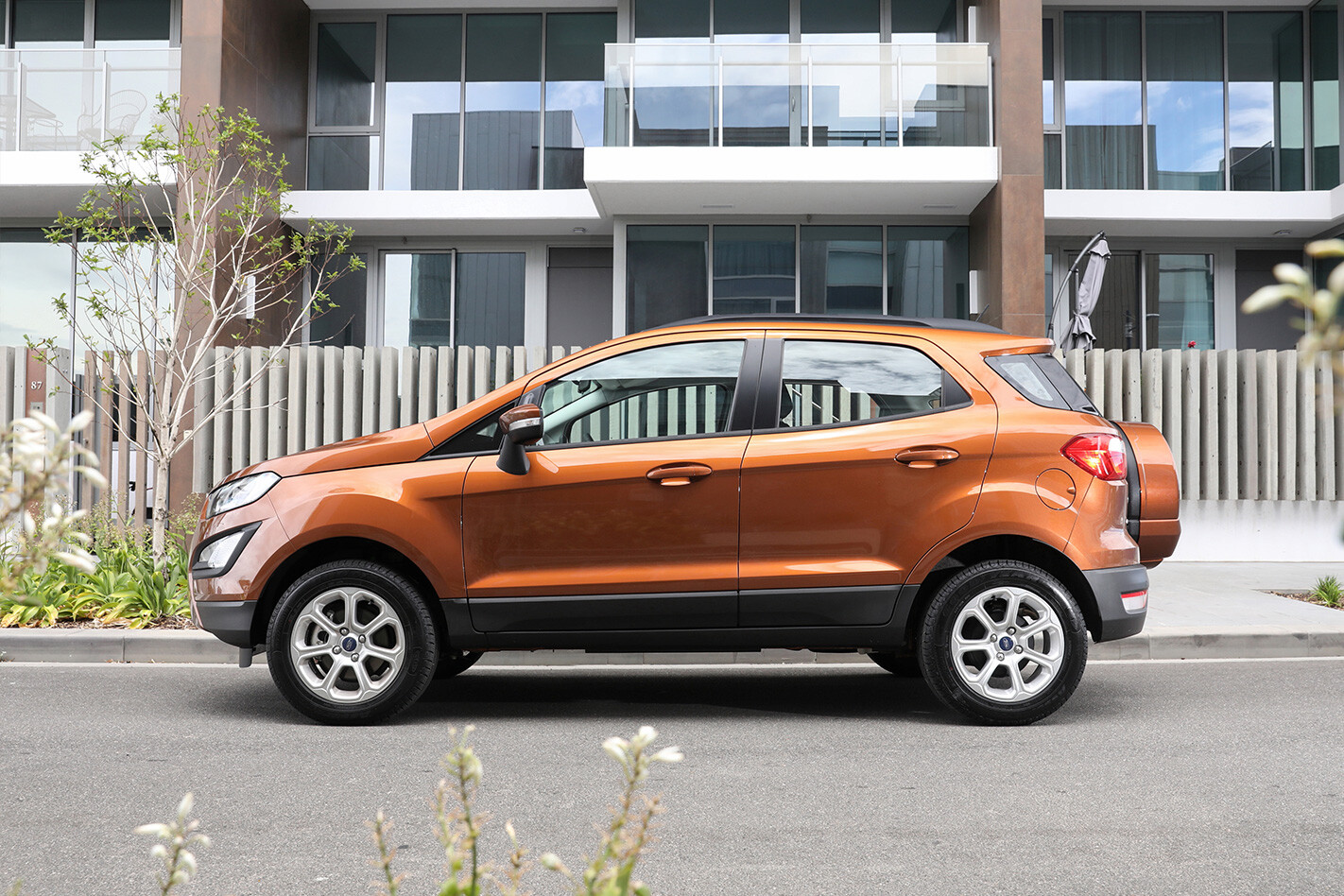 THE ugly duckling of Ford’s SUV line-up has had a makeover. The EcoSport was introduced to Australia in 2013 as a cheap, Indian-made small car based on the brilliant Fiesta platform. However, something was lost along the way. Somewhat unsettling to look at, sporting a full-size spare wheel on its tailgate and a dual-clutch automatic gearbox that is now the subject of a class action - and with an interior unashamedly built down to a price - buyers lured mainly by either quality (Mazda CX-3) or value for money (Mitsubishi ASX) voted with their wallets. And not in the EcoSport’s favour.

Ford is now keen to turn the EcoSport’s fortunes around. Key to this is a significant facelift, an interior makeover, and the decision to bin the problematic Powershift and replace it with a traditional six-speed torque converter automatic that bolts on beside the 1.0-litre turbocharged triple, relegating the six-speed manual gearbox it used to be paired with to the pages of history. Very few customers wanted it, anyway. 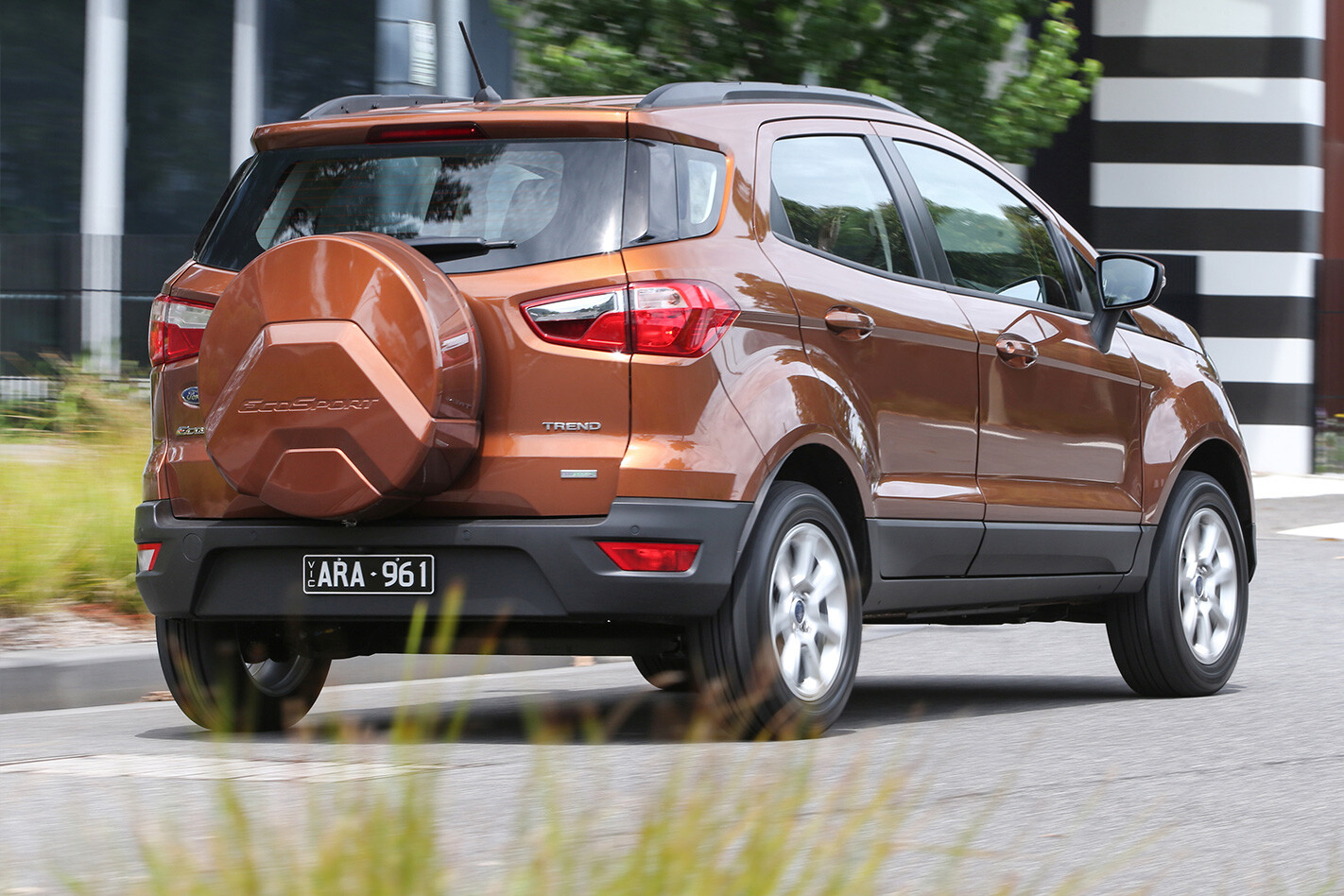 The entry-level $22,790 Ambiente, priced the same as the car it replaces, gains a more advanced version of the 1.5-litre atmo three-pot that produces 90kW/150Nm, an 8kW/10Nm gain over the old version. It’s thrummy and noisy when worked hard in stop-start city traffic, not helped by a lethargic auto that will allow the engine to spin almost out to its 6500rpm redline before snatching the next gear and chirping the least-loaded 16-inch front steel-rimmed Goodyear Assurance tyre.

A better option is the much-lauded 1.0-litre turbo triple fitted to the mid-spec $24,490 Trend ($2200 more expensive now that there's no manual option) and the range-topping, leather-clad $28,990 Titanium ($1200 more expensive). It carries over from the pre-facelift car but has more poke, generating 92kW/170Nm (that’s 10kW and 30Nm more than before) is more willing to build revs, even if the pace is still best described as leisurely, but with less vibration and noise than the bigger atmo donk. Your foot isn’t buried as hard to the firewall, either. 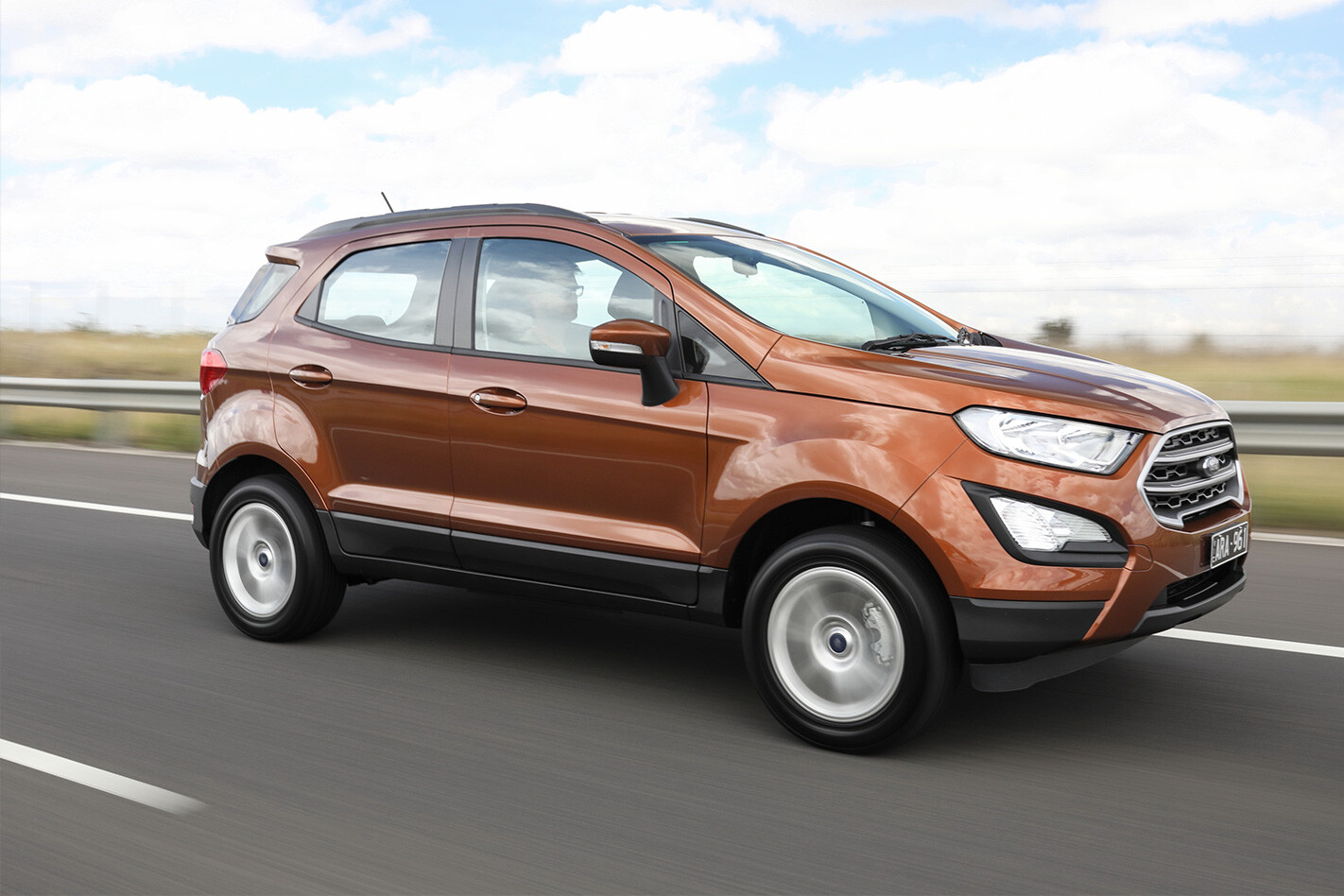 The experience behind the wheel isn’t as polished as the turbo engine, which is a shame given how polished the Fiesta, on which EcoSport is based, is. The steering is quite slow, and the ride is busy at speed over city roads where the EcoSport will spend most, if not all, of its life. Strangely, the Trend gets a hill descent control that replaces the formerly auto gearstick-mounted Tiptronic-style gear changer used for the now-departed dual-clutch gearbox.

So you’d think autonomous emergency braking would be an important feature for a city-bound SUV, then. Not Ford, because no version of the EcoSport gains AEB. But all models get a reversing camera, mounted low below the spare tyre and hanging like a small dag off the side-opening soft release tailgate, which doesn’t show enough of the world behind the SUV. Even so, the EcoSport, with its seven standard airbags, is expected to retain its five-star crash rating from 2013. 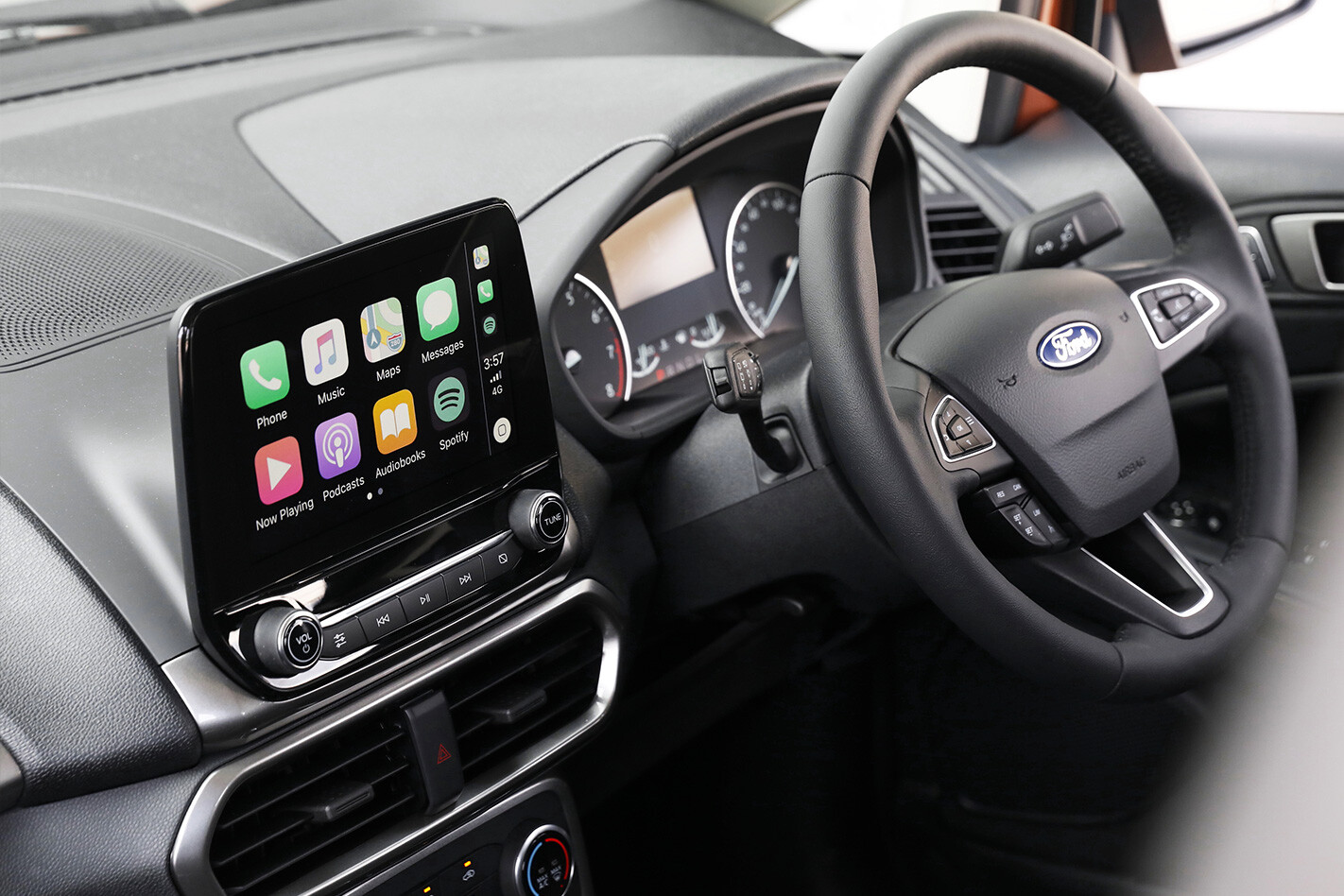 That limited view of the world in reverse is projected in a new multimedia touchscreen with digital radio that rises from the dash like a tombstone (6.5-inch in the not-too-poverty Ambiente, and 8.0-inch in the Trend and Titanium), replacing what in the past was standard buttonfest Fiesta fare. The dash now looks cleaner as a result, with Ford’s OK Google/Hey Siri-aping Sync V3.0 interface featuring prominently on the features list. There’s also now a “multimedia bin” – a hard plastic bucket on the console that sits below a pair of backlit USB ports – and a centre armrest between the front seats. The passenger-side front seat sits very tall, and has no height adjustment.

The EcoSport’s interior is very plastic, and more so in the Ambiente that features a plastic steering wheel. Hard, textured surfaces dominate, but the interior is surprisingly roomy – even in the back seat. The 346L boot will grow to 1128L once the rear seats flip forward (you need to pull the seat base forward if you want the seatback to sit flat), with a three-stage setting for the boot floor height. The world’s shortest cargo blind – it extends maybe 40cm – hides the contents away from prying eyes. The lack of a vertical-lift tailgate means it can’t be replaced with a hatchback-like hard cover.

Changes made to the EcoSport have improved it. But relative to some of the competition, the EcoSport is still a significant step behind – particularly in terms of safety. It may not look like an ugly duckling, but it still quacks like one.

The spare wheel hanging off the EcoSport’s rear door will soon join the manual gearbox in the rejects bin. Ford is waiting for a MY18.5 update to the EcoSport to replace it with a tyre inflation kit. The current spare tyre is either a full-size steel wheel or alloy, depending on the variant it is fitted to.