It’s the second generation of Mazda’s hugely popular mid-size SUV, which arrives here with sharper styling, an improved cabin and an even longer list of standard equipment. Underneath it uses the same basic platform, engines and transmissions as the model it replaces, but is now fractionally longer, lower and we’re told, much quieter to drive.

Because while Wheels was the first Aussie outlet to sample the new Mazda CX-5 in San Diego last month, that car’s US-spec suspension, steering and all-weather tyres weren’t representative of what will be in Aussie showrooms. This is our first chance to sample the local model mix and deliver a dynamic verdict on local roads.

Evolution not revolution sees the new CX-5 build on the original’s striking styling and sound dynamics while addressing a fundamental flaw: its noisy cabin. Now quieter, classier and more comfortable inside, the second-gen CX-5 arrives spoiling for a fight with the VW Tiguan at the pointy end of the lucrative mid-size SUV market.

IT TAKES less than five minutes to discover Mazda’s second-gen CX-5 is a quantum leap forward where it needed it most. The realisation arrives on the freeway where, after feeding in the throttle and settling on a steady 100km/h, I pause and listen with all my might for… nothing. Gone is the tyre roar that plagued the original CX-5. Gone is the old car’s rustle of wind noise; its constant chatter of background vibration. Now there’s just an eerie stillness as we waft along; a sense of refinement and polish that pairs perfectly with the elegantly redesigned interior. It all feels rather premium, and I’m in the boggo Maxx version. This marked improvement in the CX-5’s cabin refinement isn’t that surprising. Wheels was the first Aussie outlet to sample this new-gen CX-5 in California last month [April issue], but while that feature drive provided a telling glimpse into this new version’s potential, its odd mix of softer US suspension, a different steering tune and all-weather tyres meant we’ve had to wait until now for a verdict on the local model range’s specification and dynamics.

It’s worth explaining that in the land of generational step changes, the CX-5’s is quite minor, at least in the mechanical sense. It still rides on the same basic platform as the version it places, the 2700mm wheelbase is unchanged (though overall length is up 10mm and height has dropped 35mm), and even the engines, gearboxes, suspension and front- and all-wheel-drive systems are carried over with only minor revisions.

Mazda freely admits it has pursued a strategy of evolution not revolution, but this doesn’t mean its engineers were lazy. That marked improvement in cabin refinement was achieved through an almost fanatical pursuit of noise/vibration/harshness pathways. And while the redesigned exterior isn’t shockingly different, the opposite applies to the sleeker cabin. All variants in the five-tier line-up (which now includes a new mid-spec Touring grade in a hierarchy that reads Maxx, Maxx Sport, Touring, GT and Akera) score a leather steering wheel, a higher centre console for improved ergonomics and a classier dash design with strong horizontal lines and touches of chrome around the air vents.

Importantly, the rear seats are also much improved with a lower and more comfortable cushions, a reclining backrest that splits 40:20:40 and lower windowsills for better visibility. Rear air vents also appear for all variants, except for the entry-level Maxx, which is a disappointing exclusion. The base car also lacks the rear central armrest that carries two USB charging ports, and sat-nav, though the latter is available as an option. 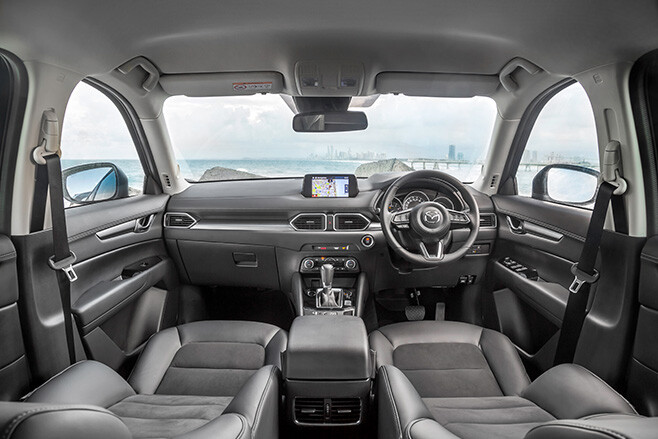 Prices have risen slightly in all variants bar the top-spec Akera, with the volume-selling Maxx Sport copping the biggest hike at $900, though standard equipment levels are up across the board. Every CX-5 now scores an improved AEB system that now works at up to 80km/h in forward and reverse, blind-spot monitoring, rear cross-traffic alert, rear parking sensors, a reversing camera, keyless start and a new dash-mounted seven-inch colour display with Bluetooth and digital radio.

Drivetrain-wise, the most popular engine will be the 2.5-litre petrol we sampled in the US, paired with AWD. It’s a muscular performer with a torquey mid-range backed up by smooth and intuitive shifts from the six-speed auto.

Less convincing is the front-drive-only 2.0-litre four pot available in the Maxx and Maxx Sport. It’s noticeably louder than the larger petrol and with 114kW/200N on tap, is in desperate need of more mid-range grunt. Even with a light load and only two people on board, the atmo unit had to work hard to haul the CX-5 up steep hills.

The big surprise, though, is the 2.2-litre diesel. Now smoother and marginally quieter, the rorty 129kW/420Nm oiler is eager and delivers a lusty turbo-heavy surge that lasts most of the way to the 5000rpm redline. Dynamically, a stronger focus on comfort and a 40kg increase in weight (depending on trim) has dulled the old CX-5’s sporty edge slightly, though this remains a competent handler. There’s excellent road holding, strong body control and the steering is fluid, even if it is overly light and lacking in feel. The ride soaks up all but the biggest bumps with well-judged compliance too, though there is a sharper edge to GT grades that roll on 19-inch wheels (lower spec versions use 17s).

Combine all this and the result is a medium SUV that builds on the original’s striking styling and sound dynamics while addressing key weaknesses. Is it as good as our current class benchmark, the VW Tiguan? In isolation it feels close, though that verdict will have to wait for next month’s mid-size SUV megatest. Stay tuned.