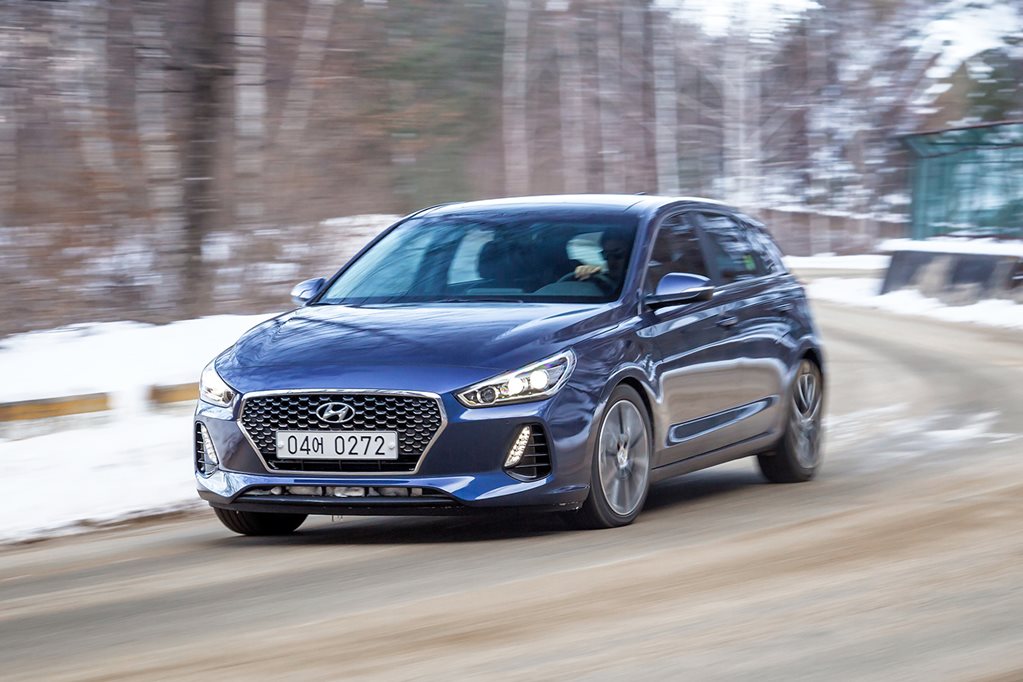 The Hyundai i30 is Australia’s favourite Korean car. Codenamed PD, the third generation of the five-door hatch is scheduled to arrive in late April. It will bring improvements that should make it even more popular.

WHAT IS IT?
An almost all-new version of Hyundai’s small hatchback, that sticks closely to the proven front-drive formula for success in Europe’s Volkswagen Golf-dominated C segment.

WHY WE’RE TESTING IT
The i30 is massively mainstream, so we leaped at an invitation from Hyundai to drive it in Korea more than two months ahead of its arrival in Australia.

MAIN RIVALS
Toyota Corolla and Mazda 3 hatches, Volkswagen Golf, and many, many more… 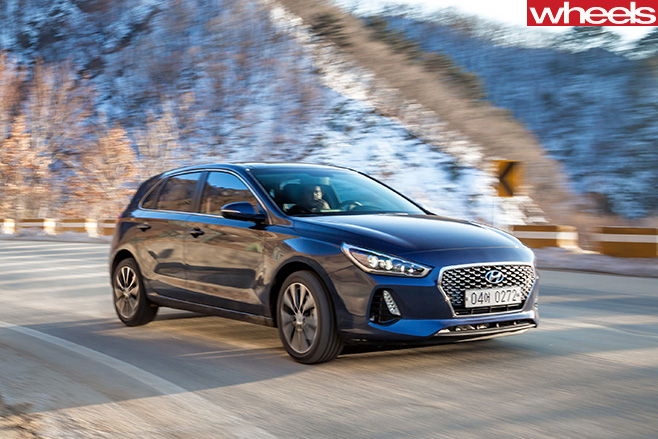 THE WHEELS VERDICT
This could be Hyundai’s best ever car. Good-looking European-designed exterior, a fine 1.6-litre turbo engine in the SR model and competitive levels of technology most places you look make the new i30 a potential small-car star. But this verdict can’t be definitive. Prices and equipment levels, for example, are unknown. And the effectiveness of the Australia market-specific chassis tuning program is yet to be tested.

THE WHEELS REVIEW
There’s not a shred of doubt which new i30 model we’ll soon be recommending. It will be the one with the 1.6T GDi engine, a fine and feisty turbocharged and direct injected four. Probably with the seven-speed double-clutch transmission instead of the six-speed manual…

Mashing the throttle pedal there’s axle tramp as the i30 accelerates snappily from rest. Gaps in the fast-flowing traffic on this busy arterial road skirting Seoul are both rare and brief. It’s one of the few occasions the Hyundai is uncouth during a drive that takes in a good variety of roads around the Korean capital and the countryside beyond. 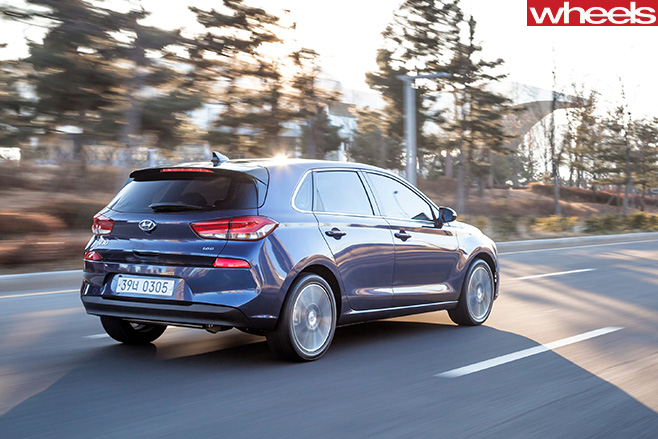 Once the i30 is rolling, this refined engine’s broad seam of muscular torque manifests itself as long and strong surges of acceleration-on-demand.

The double-clutch transmission is good, too. There’s slight jerkiness in very slow moving city traffic to let you know this isn’t a conventional auto with torque convertor, but the seven-speeder deftly manages moving off more decisively.

Shifting between gears is unfailingly smooth, though the transmission does sometimes dither momentarily if the accelerator is opened swiftly and suddenly while on the move.

The 1.6T GDi is the engine that will power the replacement for the warmish SR model that sits around the middle of the current i30 line-up.

Its 150kW and 265Nm maximums are significant rises compared to the non-turbo 2.0-litre four that’s in the SR today. And they should be the makings of a small hatch price-to-performance ratio star. With numbers like these, the i30 SR should easily spank the Mazda 3 SP25 for straight-line performance, and leave any Volkswagen Golf below the GTI eating its dust.

Hyundai will launch the third-generation i30 in Australia in late April with two other engines. The least costly grades will come with a larger, non-turbo, direct-injection four with more power and torque than the current base model engine. With 120kW and 203Nm, the 2.0 GDi almost exactly matches the current SR engine. As now, there will be a choice of manual and conventional automatic transmissions, both six-speeders, with this engine. 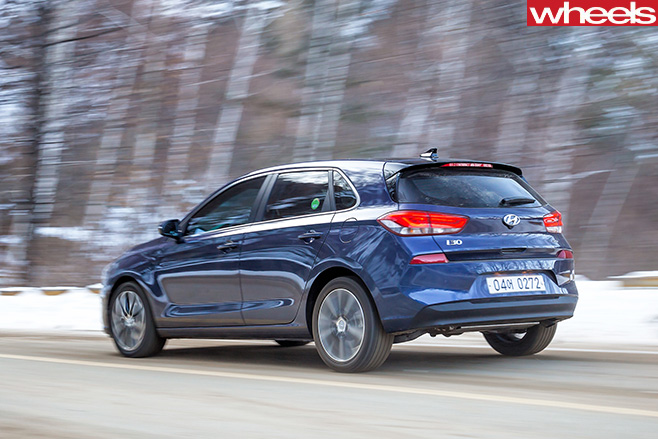 Completing the powertrain selection will be a turbocharged diesel four. The 100kW 1.6T CRDi is basically a carry-over from the current i30, along with its six-speed manual and seven-speed double-clutch transmissions. While it’s sure to appeal to the same small group of efficiency-loving, high-mileage users as the current i30 diesel, there are livelier and quieter engines on offer in the small car class.

Korea will manufacture the new i30 for Australia, which explains why this preview drive is taking place there. But the new model, with the internal codename PD, was shaped to seduce buyers in Germany, France, Italy and the UK. Hyundai aims to be the best-selling Asian car brand in Europe by 2020, and the new i30 must play an outsize role in this ambitious plan.

The car was designed at the Korean company’s European tech centre in Rüsselsheim, the German city that’s also home to struggling Opel.

According to Hyundai’s chief design officer Peter Schreyer, the objective was to make the i30 a car with a strong visual identity.

“I don’t think in a graduation like ‘How European do I make it?’ This is not my way of thinking,” he said at the initial reveal of the i30 in Frankfurt last September. 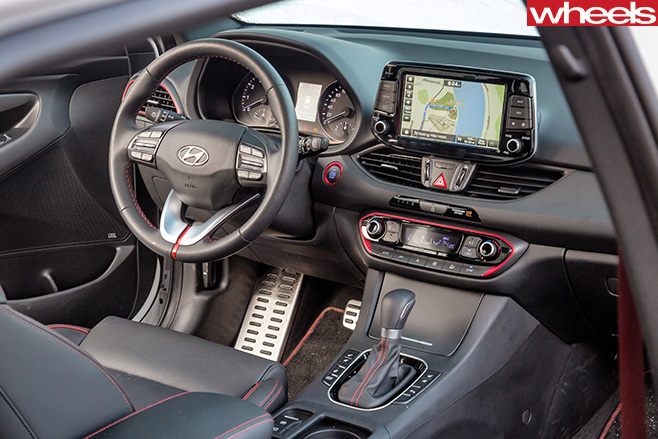 So the exterior of the new i30 is a calculated piece of design. It’s not obviously Asian, like the vast majority of models in Hyundai’s back catalogue. But neither is it a try-hard effort to appear overtly European. Just as Schreyer intended, it’s simply a rather attractive small hatch that won’t be mistaken for something made by someone else.

Although the new PD i30 shares its wheelbase with the current GD model, all other vital dimensions have subtly changed. It’s lower, but in response to the downward pressure the i30 has grown wider and longer. All the changes are small, including the increases in front and rear overhangs.

There’s a little more space inside and the cargo compartment grows slightly to 395 litres. But it’s the design that anyone climbing into a new i30 will notice first. The good-looking new instrument panel with its fashionable floating central screen is designed to emphasise the cabin’s width. For the driver there’s an attractive three-spoke steering wheel to hold and a pair of legible dials to look at.

The front seats of both the base grade and sporty SR are supportive, although the non-height-adjustable version of the passenger seat is too high for complete tall-person comfort.

While large-ish and wide-opening rear doors make accessing the rear pleasantly easy, the space once seated seems only average.

Quality? Well, let’s just say that the interior design teams working competitor brands aren’t going to be too worried. While the Hyundai interior looks well made, the materials it’s made from don’t quite create the kind of quality impression to rival Volkswagen, Mazda, or even Toyota. 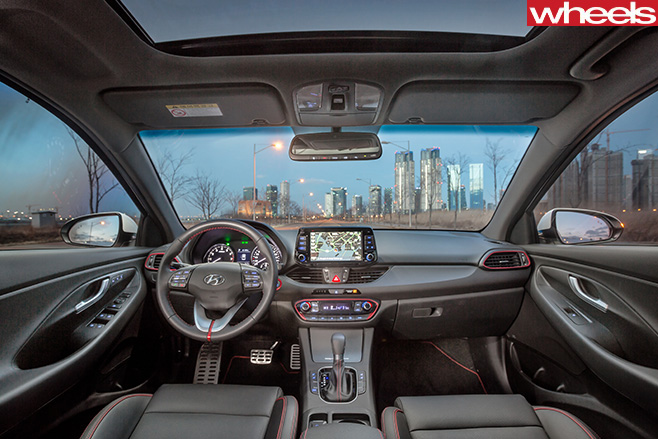 Still, the i30 will come with a competitive level of connectivity and infotainment tech, including Apple CarPlay and Android Auto.

Hyundai is also confident the interior will be a safe place to spend time. Autonomous Emergency Braking will be available in the car, though it’s uncertain whether it will be standard across the range. Other sensor-reliant driver-aid systems will also be available, including active cruise control, rear cross-traffic alert, high-beam assist and more.

It’s impossible to say very much about the new i30’s dynamics. Its more direct steering, just 2.6 turns lock-to-lock, does feel like a move in the right direction. But the cars driven in Korea – one with the 1.6T GDi and another with the 1.6T CRDi turbo diesel, and both with Hyundai’s new multi-link rear suspension – were not representative of what we’ll see in Australia come April.

Only our SR model, with the 1.6-litre petrol-burning turbo, will come equipped with the multi-link rear end. All other models will come with a less costly, semi-independent torsion-beam rear suspension set-up.

Once again, Australia will get its own specific chassis calibrations. As the biggest single national market in the world for the i30, Korea is very eager to please us. While Hyundai Australia is saving the full story until local launch, those familiar with the work say the changes are extensive.

Other things that will remain secret until the local launch in April are prices and equipment levels. Hyundai Australia is still considering its options. Literally.

The company’s chief operating officer, Scott Grant, says whether or not to include AEB as standard equipment across the range is yet to be decided. The experienced exec also hints that the days of $19,990 drive-away deals are over for the i30.

The new i30 does seem to be a car that could wear slightly higher price tags without looking stupid. Its designed-in-Europe exterior alone surely will be enough to persuade some. Others will be attracted by the impressive performance of the SR. Some will like the connectivity and infotainment tech.

Simply put, the new i30 is a classier kind of Korean than we’re used to driving. Hyundai has always been ambitious, but now there’s confidence, maturity and increasing expertise to go with it.