SOME people might be shocked to hear that Hyundai outsold both Ford and Holden in Australia last year.

Some enthusiasts might be equally surprised to learn that before Santa starts sleigh-ing this year, the South Korean brand will have launched both a twin-turbo V6 rear-drive sedan and a 202kW hot hatchback.

Consider this third-generation i30 as an early taste of the year ahead. More than that, though, in flagship (for now) SR form this latest five-door hatch swaps out the revvy atmo 2.0-litre for a 1.6-litre turbocharged four-cylinder engine with healthy 150kW and 265Nm outputs. A decade ago, the Mk5 Golf GTI developed 147kW/280Nm. It’s the engine from the mediocre Veloster Turbo teamed with chassis parts from the impressive Elantra SR. Other differences lie in the detail. Where the Elantra is targeted at North America with low-grade cabin furnishings, the i30’s aims for Europe.

Torsional body rigidity improves by 17.5 per cent compared with the second-gen i30, thanks to a lift in high-tensile steel from 29.5 to 53 per cent. The Hyundai i30 SR finally scores multi-link independent rear suspension (IRS) and either six-speed manual or seven-speed dual-clutch automatic transmissions, in both cases like the Elantra SR.

On a presentation at Hyundai’s headquarters in Seoul, the company chose two words to sum up what it believes is the greatest leap forward for the new i30: driving dynamics. “The reviewers gave high scores to the second-generation i30 overall, but varying scores for its ride and handling quality,” it confessed in a statement.

Hyundai claims improved steering and suspension geometry will deliver the goods, and in its native territory that appears to be the case. The electro-mechanical steering is tight on the centre position, decently sharp just off it and consistently weighted as lock is wound on.

Australia will score local suspension and – for the first time – electronic stability control (ESC) tweaks, but even on Hankook Ventus Evo 2 rubber, front-end response is already pointy, with spring and damper rates that are comfortable yet controlled; even sophisticated. 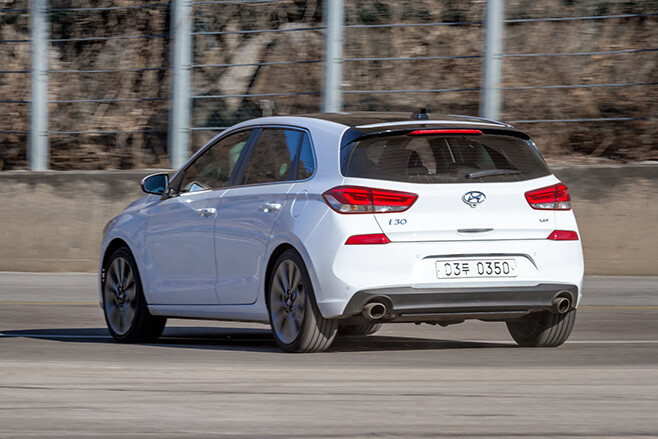 Only the ESC feels off – sometimes literally as it can be slow to react to body movement yet is too abrupt in cutting power on corner exit.

It gels with a forced four that doesn’t sound inspiring, but is certainly gutsy and mates with a slick auto that only stumbles around town as the twin clutches slip oddly on quick downshifts. Where the i30 SR really excels, though, is being an Elantra SR with taste. From the restrained-chic exterior to the sweeping new dashboard, Hyundai Australia will from April offer a $30K warm hatch that doesn’t feel like a $20K austerity special.

It isn’t quite shock and awe, but the i30 SR is surprisingly very good indeed.