WHAT IS IT?
An all-new, rear-drive, all-turbo, four-door sporting flagship for the Kia brand, inspired by the GT concept that debuted at Frankfurt in 2011, but (unexpectedly) carrying the nameplate of the GT4 Stinger coupe concept from 2014.

WHY WE’RE TESTING IT?
A month before the car’s Detroit show unveiling, Kia offered a handful of international motoring media an exclusive drive of two pre-production Stingers at Hyundai-Kia’s proving ground in Namyang, South Korea. We tried two variants – the entry-level Stinger (a rear-drive 190kW 2.0-litre turbo-petrol four) and the Stinger GT (in AWD configuration, with a 272kW 3.3-litre twin-turbo V6), each tied to an eight-speed automatic. 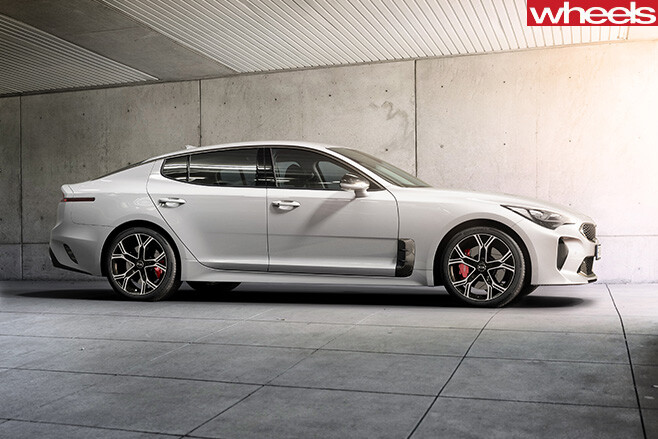 How does the Stinger GT compare to the 2018 Holden Commodore?

MINUS: Both engines could use some acoustic tuning; no AWD for right-hook markets; really only a four-seater; the baggage of the ‘Kia’ logo and its simplistic design isn’t on the same level as the rest of the Kia Stinger. This seductive ‘gran turismo’ sedan from totally left-field proves that Kia really does have aspirations well beyond the mediocrity of appliances like the Cerato. It marks the beginning of a new chapter for the brand; an enthusiast-driven halo car with the performance, style, specification and driver focus to demand that people take notice. If Kia can get the fine-tuning right – perfecting its dynamics and enhancing the acoustic personality of both engines – then the only thing holding back the Stinger will be residual brand prejudice.

An anti-appliance from a brand known for value, pushing against the tide with its rear-drive, all-turbo, gran-turismo mindset, Kia’s new four-door ‘Fastback’ – named Stinger – is the sort of car that makes headlines simply for being unique. And for not being a two-door coupe, as Kia’s 2014 GT4 Stinger concept may have suggested. 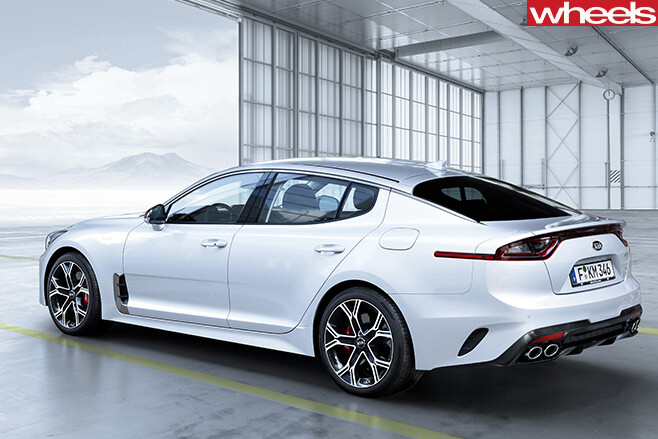 Competitors? Perhaps Volkswagen’s forthcoming CC replacement, the Arteon, and possibly Skoda’s similarly sized, though conceptually opposed Superb, as well as Holden Commodore/Calais variants, before and after transitioning to German DNA. Target buyers? More than likely anyone considering a premium-brand four-door (think Audi A4/A6, BMW 3/4/5 Series, Mercedes-Benz C/E/CLS-Class, Lexus IS/GS and Infiniti Q50) who doesn’t need to follow the herd to get their brand-image on. Even Kia doesn’t really know.

What the Kia’s European-led design and engineering teams do understand is that the Stinger’s gestation has been “all about passion” – one intended to spearhead an emotional offensive for the Korean brand.

“[It’s] a thrilling story for us”, gushes Kia’s global design chief, Peter Schreyer, as he reveals the Stinger and its design inspiration across a vast cinemascope of screens inside the Namyang Proving Ground, each scrolling through a menagerie of lush imagery. “To make a gran turismo car … that it could see daylight someday, that was our dream.” Seven years in the making, the Stinger is most obviously the production realisation of the GT Concept that Kia debuted at Frankfurt in 2011. But it can also trace its design inspiration and classic styling cues from the “sports car world”. When questioned about the first-generation Maserati Ghibli (1967-73) shown in the product presentation, Kia’s Chief Designer of its European Design Centre, Gregory Guillaume, said “[we wanted Stinger to] channel the spirit of the iconic GT cars of the ’70s”.

A long, low car – 4831mm long, 1869mm wide and 1400mm tall, riding on a leggy 2906mm wheelbase – the Stinger exudes that classic GT proportion of short front overhang, long front axle-to-dashboard distance, long wheelbase and extended rear overhang. “Aggression rather than brutality” is the way Guillaume describes it, vaguely like an Optima on steroids. But if the Optima is Liam Hemsworth in active wear, then the Stinger is big-brother Chris, decked out as Thor. The Stinger is dripping with neat design details, many of which have been translated directly from the 2011 GT concept car. An exquisite chrome accent line running from the base of the A-pillar to the lower edge of the rear screen, the upswept rear door line, and ‘Cleopatra-eye’ tail-lamps are among them, as are the many aero aids (smooth floor, rear diffuser) intended to keep the Stinger’s form clean and free of the need for a rear spoiler.

There are many “sports car world” cues in there too, a phrase both Schreyer and Guillaume use multiple times. The island-type bonnet shut-line, (non-functioning) air ‘vents’ high up on the bonnet, and ‘Coke bottle’ hip at the Stinger’s waist are all there to enhance its front-mid-engined, rear-drive proportion and presence. “For us as designers, it’s Christmas”, says Guillaume. But it’s the muscle-car hipline that I like the most. In side profile, it appears to be a horizontal swage line, but from rear on, the Stinger’s hips bulge outwards, hugging 255/35R19 Michelin Pilot Sport 4 rubber on the up-spec GT and emphasising the Stinger’s rear-drive mechanicals. It’s a meaty look, with the rear lights looking far less droopy in real life.

Stinger’s roomy interior packs a similar level of personality. There’s clearly been some design inspiration from other cars – notably Mercedes-Benz in the circular air vents and touchscreen prominence – but there’s interesting Kia DNA in there too. Classy metalicised, double-deck centre-stack switchgear, uber-cool toggle/barrel rocker switches for the seat heating and cooling, Kia’s terrific new-gen steering wheel with an even deeper dish, and ‘floating’ door grab handles with tactile rubberised backing. It’s a world away from Kia’s cheap and cheerless past.

Given Stinger’s low styling profile, there’s an unexpected amount of room inside, though it’s no Commodore. A 1.93m-tall German journo squeezes into the rear with his hair brushing the headlining, but there’s respectable legroom and seat support, and a slightly elevated view forward. Up front, it’s even better – seated low, legs stretched out in front, just like a GT should be. Beneath the Stinger’s sensual form resides a development of the Hyundai Genesis (soon to be Genesis G80) platform. Overseen by former BMW M engineering head, Albert Biermann (Executive VP and head of vehicle test and high-performance development for the Koreans since April 2015), Kia has re-arranged some steering kinematics and the Stinger features new front struts, though its multi-link rear axle remains similar to the Genesis’s arrangement. But the Stinger is clearly aimed at a different market.

When Biermann saw the GT in the design studio, he said “it needs to drive the way it looks”. And so the focus has been on developing an engaging and responsive car that’s also a comfortable, long-legged express, thereby fulfilling the ‘gran turismo’ brief. Both engines are available with rear- or all-wheel drive, but no manuals will be offered, and it’s unlikely the Stinger will feature a V8 either. The 5.0-litre, left-hook-only V8 from the Genesis G80 and G90 is “more of a luxury engine”, according to Biermann. The Stinger’s AWD system is also left-hook only, meaning solely rear-drive for Australia.

What we weren’t expecting from this pre-Detroit Namyang reveal was to actually drive the Stinger. But Kia has arranged for two left-hook pre-production cars – a rear-drive turbo four and an AWD twin-turbo V6 – to be evaluated in several interesting exercises.

The 2.0-litre sticks to Namyang’s enormous skidpan, completing a slalom, two full-throttle straight-line runs and, amusingly, a ‘drift’ session with ESC off, skirting inside a witches-hatted circle.

The AWD V6 remains exclusively on Namyang’s new handling circuit, where we’re given a demo, followed by two hot laps of our own and a cool-down. Biermann likes the layout, though he wishes it had “more fast corners”, which is where the Nurburgring chassis testing comes in.

Around the course, the Stinger GT feels smaller than it actually is, which is a good thing. There’s a sizeable difference in weighting for the variable-gear-ratio steering between Comfort and Sport, but the red-blooded tune provides well-judged and consistent feel, spanning a quick rack with just 2.2 turns lock-to-lock. Braking deep into a left-hand hairpin, the AWD GT understeers moderately if you don’t trail-brake the nose deep enough, but this easily transitions into mild oversteer on corner exit. Kia is still working on the fine tuning, but the bones are definitely there.

What also needs some work, in my opinion, is the twin-turbo V6 engine. It’s a strong, seemingly lag-free engine that revs out cleanly to six-five or so before upshifting sweetly, but it sounds a little grainy. It isn’t obviously boosted in sound , either (no bad thing), yet there’s clearly room for some acoustic tuning. Some bent-six induction/exhaust rasp and some overrun crackle would be hugely welcome. The turbo four fits into the same category, feeling strong up to its 6500rpm shift point but sounding a little workmanlike, without the crisp backing track its performance clearly deserves. With conventional fixed-rate dampers (Drive Mode only covers steering, throttle, shift calibration, ESC and, if fitted, AWD set-up), the rear-drive four feels to have a more comfortable suspension tune than the GT. But with 60-70kg less overall weight to deal with than the V6 (and another 60-70kg by deleting the AWD system), the base Stinger also feels lighter on its feet, while its constant-ratio steering feels reassuringly connected.

Wearing its standard 225/45R18 rubber, the four-pot Stinger also loves to drift. Being no slouch itself (around 6.0sec to 100km/h) and with all that low-down torque, plus a standard mechanical limited-slip diff, the base Stinger traces an easily controlled and precise sideways arc for two laps until the Koreans ask me to stop to save the tyres. It’s an encouraging display from this against-type sports sedan.

Indeed, the Kia Stinger could well be a panacea for Aussie petrolheads. Perfectly timed to be in Kia showrooms exactly when Holden’s rear-drive VFII Commodore prepares to depart, at an estimated low-$40K for the turbo-four and low-$50K for the GT, the Stinger brings not only value-for-money to the table, but also some genuine driver and sex appeal.

It’ll probably never be as tough as a Commodore or Falcon on Outback dirt roads, and it won’t seat five in as much comfort, but people buy SUVs for that stuff these days. Instead, it provides a cool, stylish, affordable solution to the rear-drive passion that we’ve held on to longer than any country on earth.