With more power, more noise and better looks, Tickford has brought the Mustang out of its shell

Aristotle observed that ‘nature abhors a vacuum’, and the same is true of the automotive industry.

Anyone who has studied the rapidly expanding ranges of the premium German brands will see the truth evident in this statement. No sooner has a gap in the market been identified than it’s filled with the latest niche model.

Ford also experienced this phenomenon when it introduced the Mustang to Australia, the level of pent-up Pony Car demand catching it off guard and resulting in year-long waiting lists. But that’s not the end of the story. 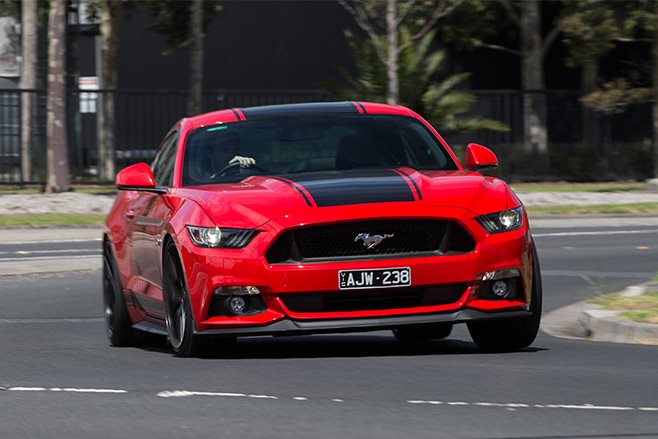 The lack of any right-hand drive development program for Shelby’s official go-fast Mustangs means any customer wanting more than the standard GT has to offer is forced to turn to the aftermarket, at least for now.

Thankfully, those customers are spoiled for choice, with modified Mustangs the flavour of the month, and a familiar name has now added its own offerings to the menu.

The Tickford brand has long been associated with tweaking Fords, but the latest iteration has nothing to do with Tickford Vehicle Engineering, the company responsible for everything from the Capri Clubsprint and right-hand drive conversions of the fourth-gen Mustang to the Falcon-based HSV competitors of the late nineties and early 2000s. 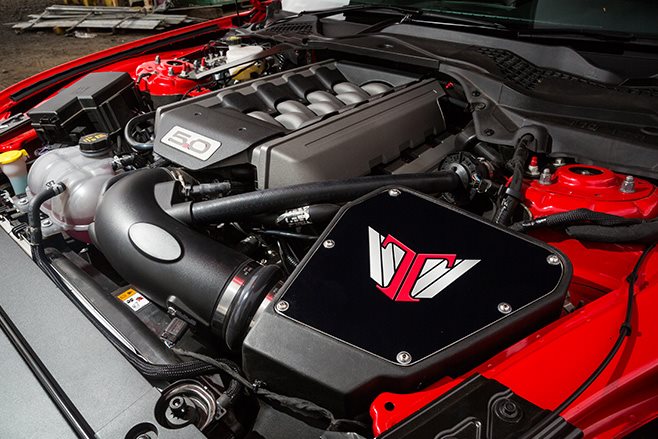 Tickford’s first offering was based on the Ford Ranger, however, it’s now expanded its portfolio to include the Mustang. Both GT and EcoBoost (which we've also sampled; see breakout below) have received attention, with Harris saying Tickford’s intentions are “to bring out the personality of the [Mustang]. Especially with the EcoBoost, we just wanted to bring it to life.

We wanted to keep the packages simple, easy for consumers to understand, and whilst we’re somewhat conservative in our approach, the intention was to make it feel like a sports car without compromising a great package. 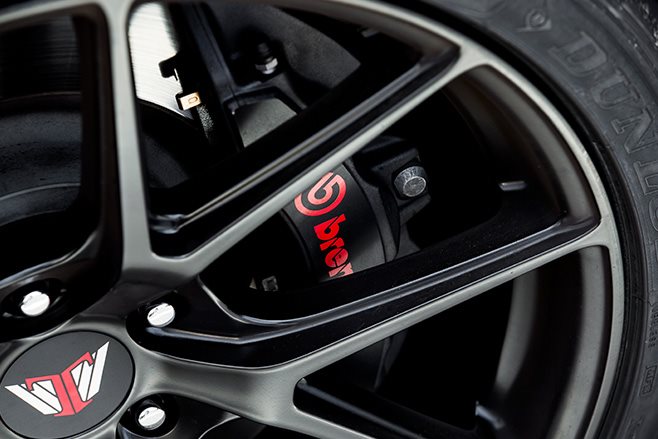 There’s no magical potion we’ve applied to this, if you’re going to enhance [the Mustang], you need to make sure it has an attitude to it.”

The Tickford Mustang certainly looks the part. With the height-adjustable suspension set to its lowest setting, the body hunkers down over the larger wheels which fill the guards perfectly. 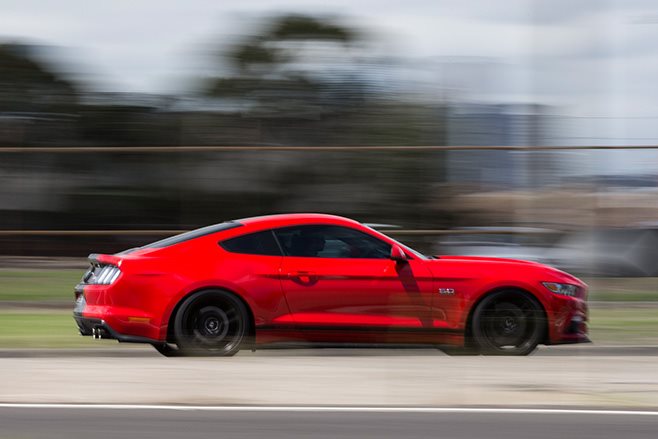 The larger rolling stock seems to widen the whole body and substantially increases the Mustang’s already potent street presence. Judging by the public’s response from our time with the car, you’d need an Italian supercar to out-pose Tickford’s bright-red GT.

Its conspicuous nature is only enhanced when a press of the starter button produces a thunderous boom from the quad carbon-wrapped exhaust tips. Gasses exit a 3.0-inch cat-back exhaust, which together with a hi-flow cold air intake, throttle body spacer and custom tune lifts outputs from the 5.0-litre Coyote V8 to 360kW/585Nm from the standard car’s 306kW/530Nm.

Those are substantial increases for a naturally aspirated engine but impressively, the Tickford ’Stang feels good for the claimed numbers. 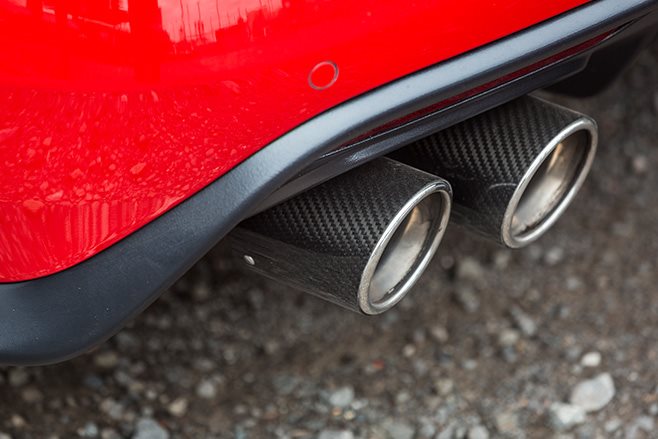 It’s like there’s a bigger engine under the bonnet, with more urge throughout the rev range while still retaining its ability and enthusiasm to rev. It’s tractable enough to easily take off from rest in second gear and cruise in sixth at 60km/h, yet will still happily spin to 6500rpm.

Unfortunately we didn’t have the chance to performance test the car on this occasion, but by the seat of the pants it feels like an improvement of around half-a-second over the quarter mile would be on the cards, resulting in roughly a 13-flat. The engine revisions inject a welcome dose of attitude into the Mustang.

As good as the standard car is, it does feel a little sanitised, whereas the Tickford’s louder soundtrack and addictive extra urge makes it feel more special. It’s not perfect; a fellow tester found the razor-sharp throttle response a step too far and the bass-heavy exhaust note isn’t to my tastes. 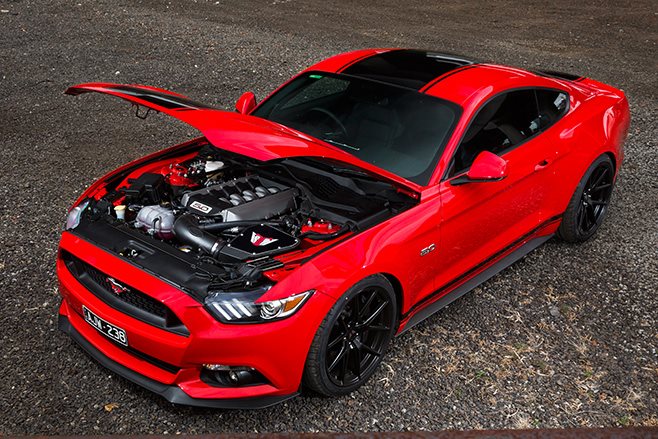 Under load at low revs it reverberates around the cabin like you’re standing too close to the speakers at a Metallica gig, though the drone is usually solved by plucking a lower gear. Personally, I’d like a crisper note with more treble, but sound is subjective and others may love the Tickford’s deep bellow.

Tickford’s chassis modifications are likely to be equally polarising, as whether they’ve improved the Mustang or not will depend on your priorities.

In addition to the aforementioned rolling stock upgrade, Tickford’s $3990 suspension package adds new springs and dampers developed with an overseas supplier. Tickford claims the setup is biased towards road driving, with roughly a 70:30 weighting between road and track use. 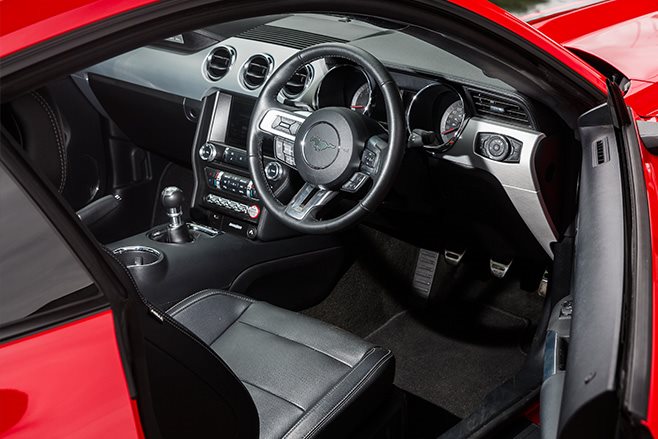 Contrary to the beliefs of many, the current Mustang is a fine handler, its relatively soft setup resulting in plenty of body movement but offering excellent compliance, grip and traction.

It’s a polished performer that feels more European than American, but Tickford’s stiffer setup swings the pendulum back towards the latter.

The ride has suffered most, deteriorating over poor surfaces and at high speed, where it feels to lack travel. It’s not terrible – there’s no crashing or evil behaviour – but it is very reactive to the road and there will be those that prefer the standard car’s greater compliance.That said, both editor DC and I agree we’d happily live with the sharper ride given how good the car looks with this setup. 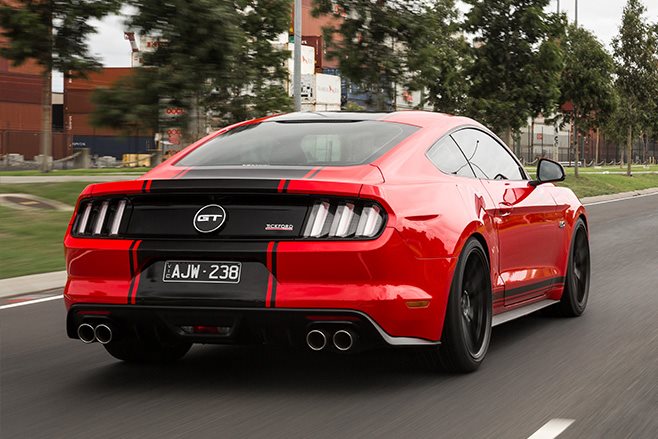 Tickford’s stiffer suspension has also made the Mustang much more playful. In standard form it’s tied down firmly enough to need real provocation to misbehave, but with less weight transfer it feels easier to overcome the tyres’ purchase, even with the wider rubber at both ends.

Even just stamping on the throttle in a straight line is enough to have the rear end waving in first or second gear, something which the lenient ESP system is only too happy to allow.

Get greedy with your entry speed and the nose will wash wide, but judge it right and you can throttle-steer the car in a fashion that’s much more difficult with a standard Mustang. The progression with which it loses grip at either end makes it easy to play around the limit with confidence; the sharper responses do exacerbate the slow steering, but it’s a compliment to the chassis that you crave that extra precision. 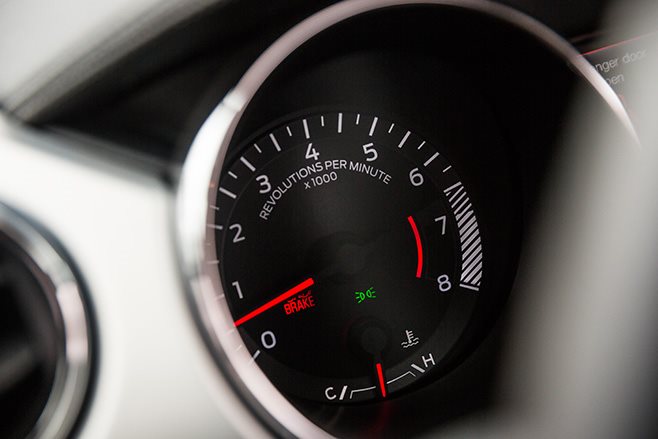 It’s questionable whether Tickford’s modifications have actually improved the Mustang’s cornering abilities, which is what we were referring to when we said that the modifications would be polarising.

If you’re a fan of outright grip and refinement, it might be preferable to keep the standard setup, but if you like to feel a car squirm beneath you, Tickford’s suspension does give the car more personality.

Of course, the beauty of Tickford’s package approach is that you are free to make the choice. Despite the supposed road bias, there’s the suspicion that on a smooth track with stickier rubber the stiffer setup would come into its own. And why not take it to a track? It’s the perfect place to explore the extra performance and the Mustang brakes are more than up to the task. 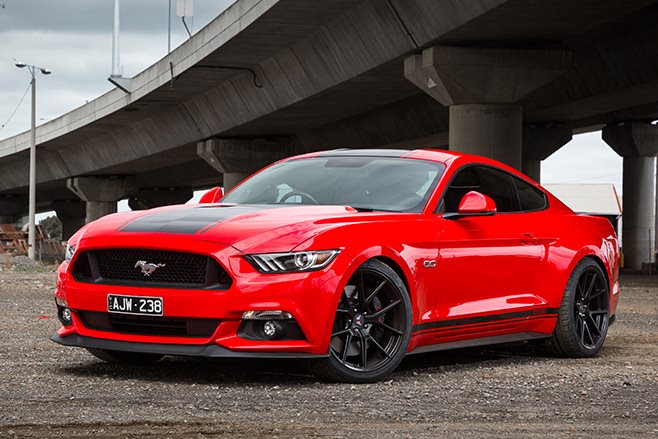 All up, the modifications add a hefty $15,470 to the Mustang’s base price of $57,490 (manual), however, even with a total ask of $72,960 the Tickford’s only real competitor at this price point is the BMW M240i, which has nothing like the same street presence.

Has Tickford improved the Mustang? Objectively, probably not, as in boring but important areas like ride and refinement the car has taken a step backwards, however, in our opinion it’s now a better Mustang. It sounds, looks and handles more like a proper muscle car. If Tickford’s intent was to bring out the Mustang’s personality, then it’s absolutely nailed it. 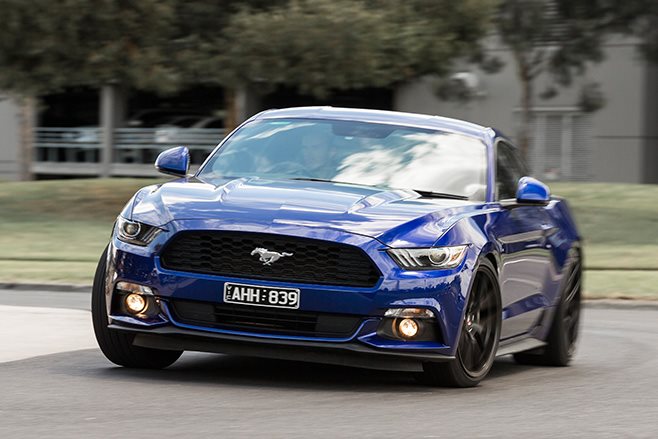 The Mustang EcoBoost is a hard car to give a verdict on, and in some ways Tickford’s enhancements only enhance the difficulty. What is certain is that the $6990 Power Pack, which lifts outputs from 233kW/443Nm to 270kW/520Nm, makes the EcoBoost a much more attractive proposition.

Not only is it now a properly fast car, feeling comparable to the standard V8 GT, but the growl under acceleration and pops and sneezes on the over-run inject it with a much needed dose of character. There is some lag to contend with, and our test car had a weird hesitation from rest at times, but in general this boosted-up four-pot was much more fun to drive. 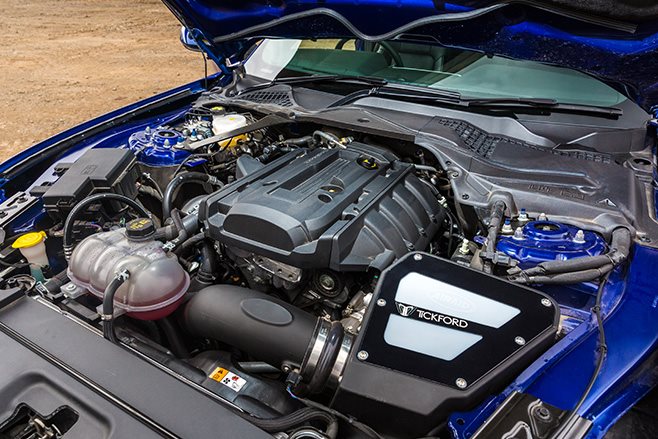 Equipped with the same suspension and rolling stock upgrades as the V8, the lighter EcoBoost felt to ride a little better and also had stronger traction, though the turbo delivery made the transition to oversteer sharper. Nonetheless, the extra grunt allows you to work the chassis in a way that is much more difficult in the standard car.

The trouble is, thus equipped, Tickford's EcoBoost comes in at $61,470, or enough to buy a standard V8 GT with change (assuming you can get one at something close to RRP). And while improved, we'd still take a standard V8 over a tuned-up EcoBoost.

That said, if you're a turbo fan, we'd recommend the upgrades as they definitely lift the four-pot's fun factor. 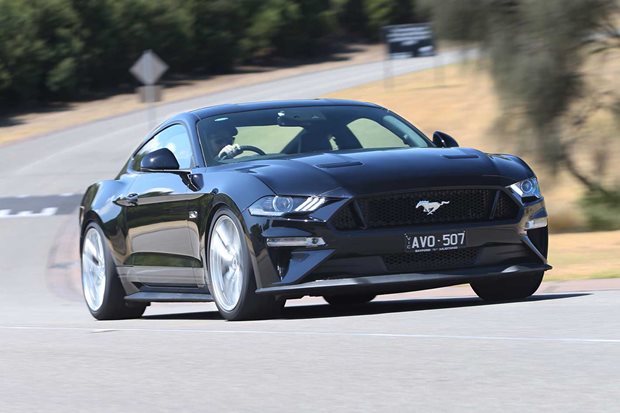 Supercharged 5.0 V8, 530kW and a stance to match. We saddle-up Tickford’s super ’Stang 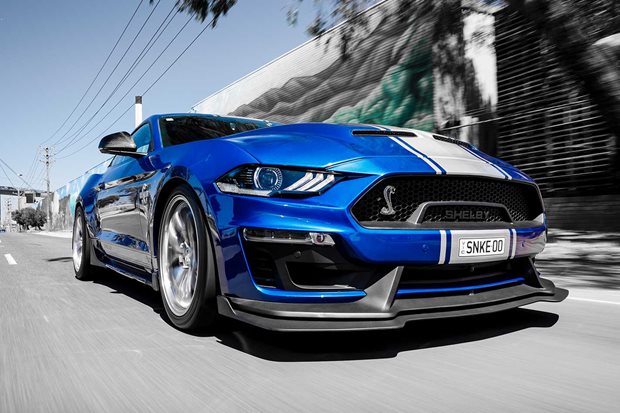 Think the atmo Mustang GT is a bit too tame? Shelby adds grip and grunt for one hell of an 800-horsepower ride 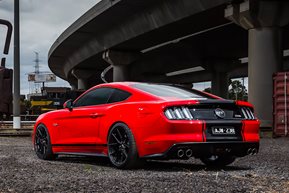