Don’t ever underestimate the Aussie car-buyer’s appetite for performance.

Whether it’s Ford Mustangs or high-end AMGs, this market is a sponge for the things and a global leader when it comes to ticking the `hottest one’ box. So no real surprises, then, to learn that the 7.5 upgrade of the VW Golf now incorporates a broad performance range rather than just a couple of models.

In fact, you can see that VW is taking the whole performance Golf thing into its own space where those cars will exist almost as a stand-alone brand, separate from the bread-and-butter Golf gear. 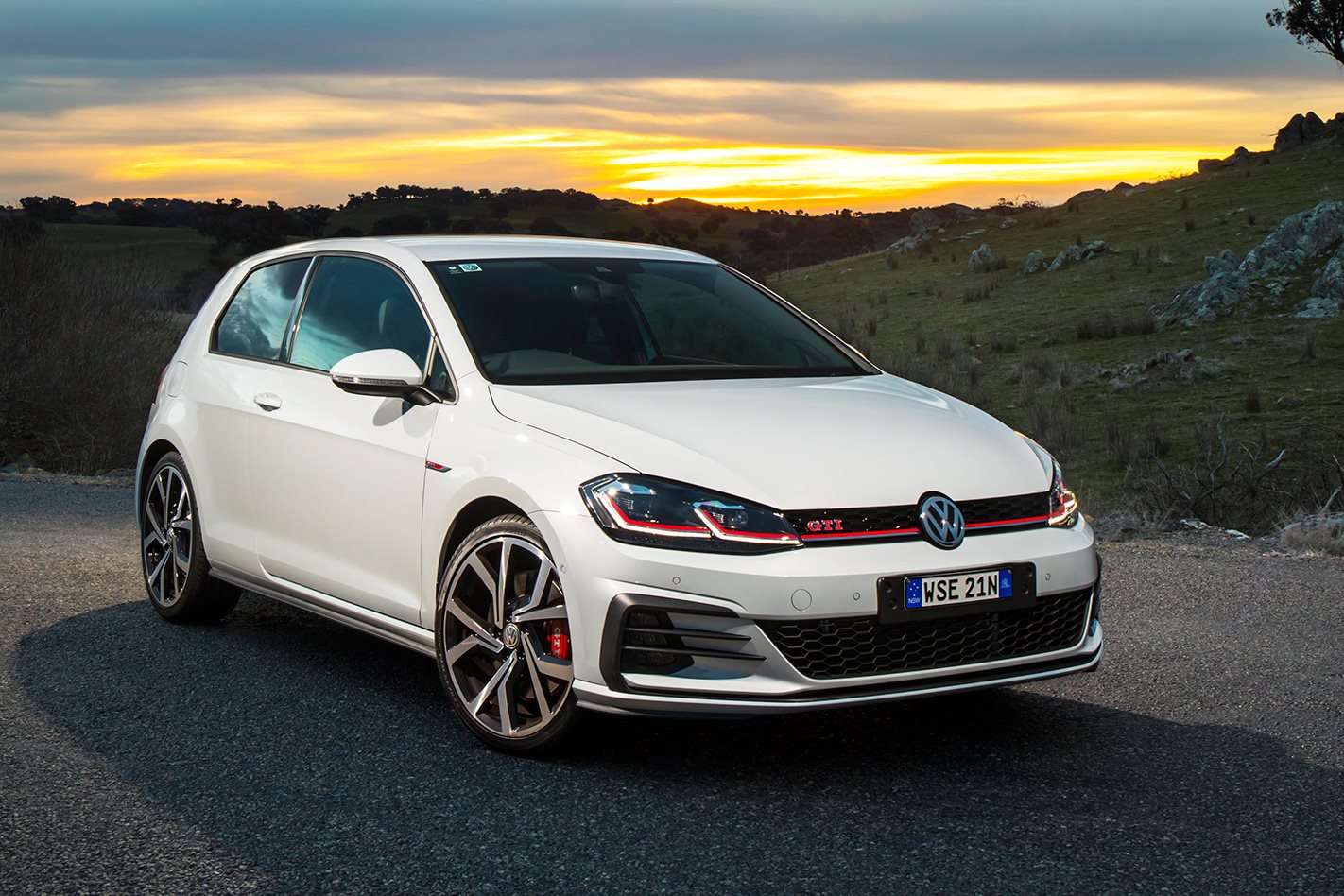 There are some exciting fast-Golf models coming in the next few months, but for now, the Golf Performance catalogue is made up of a base-model GTI, a GTI Performance and a revised Golf R along 7.5 facelift lines.

Given the overall move to 7.5 specification wasn’t a huge one, there aren’t too many changes to see here, but if anything, the concept of a rapid hatchback has been refined and massaged along.

But what you will see now are LED head and tail-lights, new front and rear aprons, bigger tail-pipes, new colours and 18-inch alloys as a minimum. 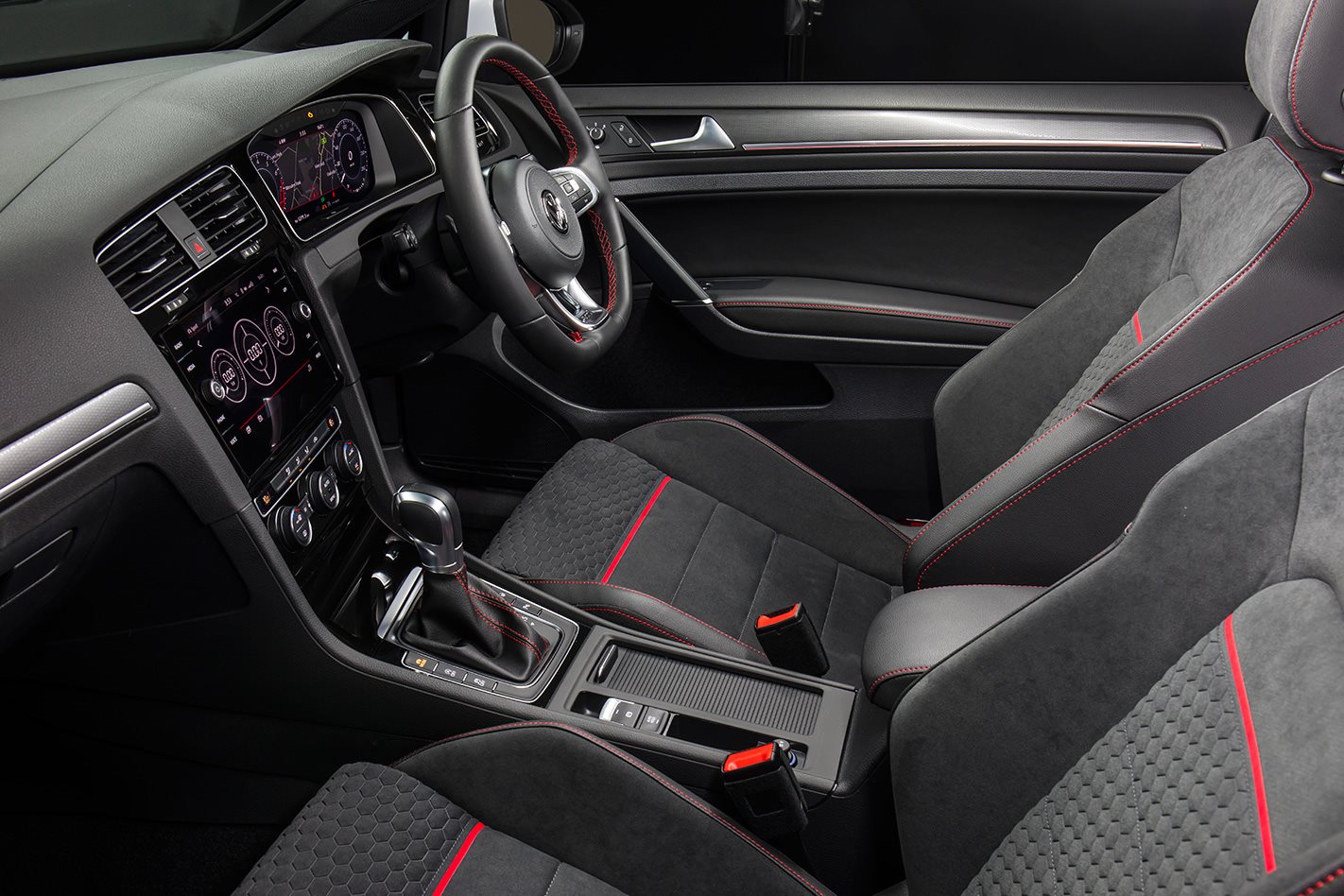 Inside, there’s the new active dashboard (standard on the base car) the upgraded info screen, an upgrade of the stereo, better navigation, improved media interface and new tech including a driver-assist package that offers radar cruise, lane-assist and blind-spot monitoring. All Golfs now have autonomous braking as well.

Things kick off with the entry-level GTI (from $41,490) which gets a 169kW tune of the two-litre engine (with a wider band of torque) and a choice of six-speed manual or the same number of ratios in the (now) old dry-clutch DSG.

To drive it is to understand that any changes are of the incremental type and that while there are improvements, they’re mainly to do with liveability and comfort rather than any huge dynamic leap. It remains, however, a hugely entertaining and satisfying car to punt along with a feeling of real class in the suspension department. 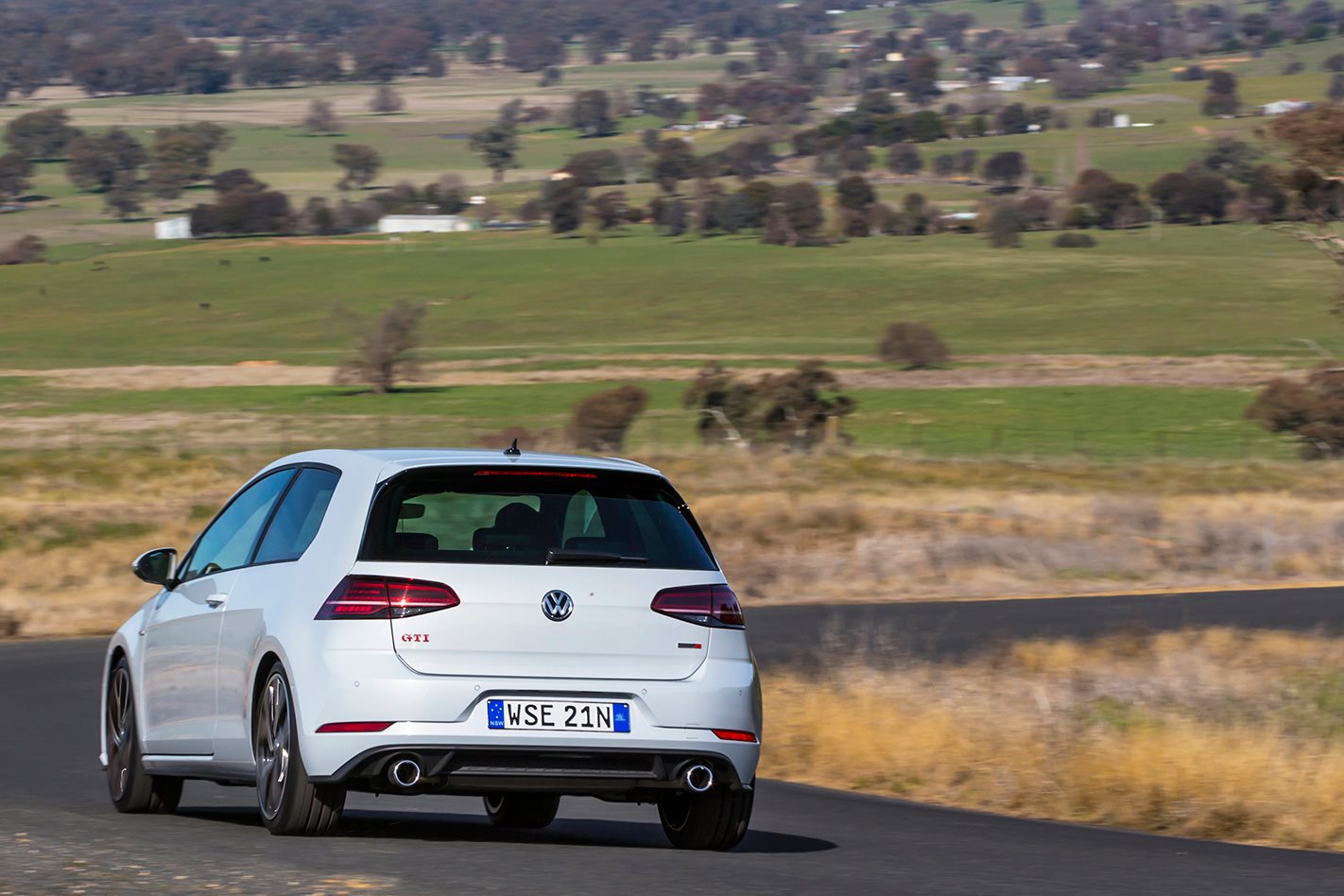 Of potentially greater interest to most of us is a model called the GTI Performance Edition 1 (suggesting there will eventually be an Edition 2) which will come here on a limited (150 examples) basis. It’s a three-door-only deal and, in Edition 1 form at least, it’s DSG-only.

Beyond that, it’s pretty well loaded with 19-inch alloys, tinted glass, the active dashboard, driver-assist, leatherette trim, dynamic indicators (the ones that scroll the LEDS from the centre out) and a bunch of GTI branded gear in a GTI carry-bag.

Mechanically, it’s choice picking, too. The Performance gets bigger, 340mm front, 310mm rear ventilated discs and the engine has been emboldened with a new variable valve lift function on the exhaust camshaft and dual-injection which uses a total of eight injectors; four directly into the combustion chamber and four behind the inlet valves old-school style. 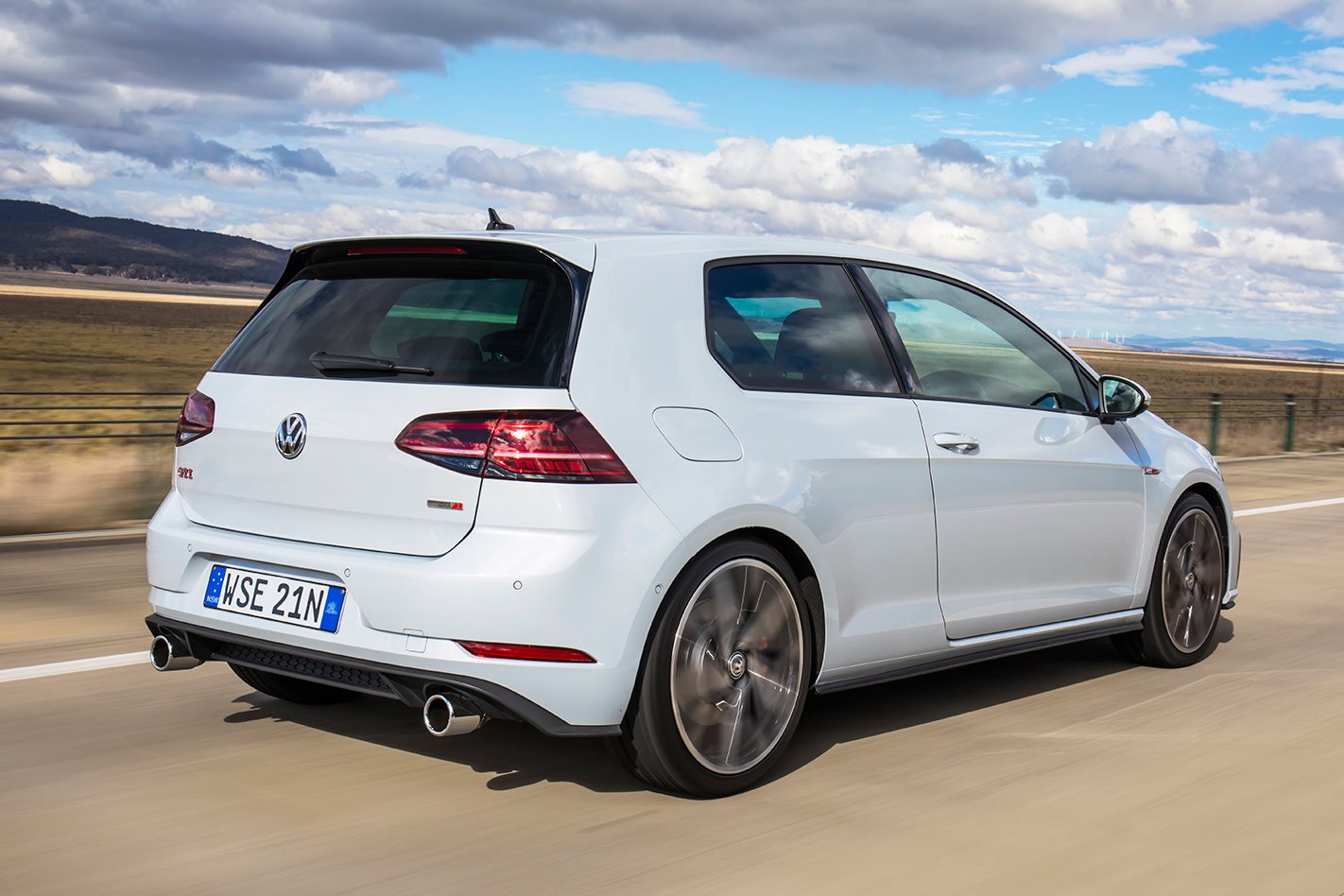 The ECU can switch between sets of injectors to tailor the engine’s burn for either power or efficiency and the end result in Performance specification is 180kW and 370Nm. There’s also now an electric wastegate on the turbo.

That power level has created the opportunity to use the new seven-speed, wet-clutch DSG gearbox which can handle up to 420 input-Newtons but requires a little more power to overcome the drag of the wet clutches. And, like the GTI Performance and 40th Anniversary models we loved so dearly, the new Performance Edition 1 gets the superb mechanically locking front differential.

Using a set of pre-determined tables (about eleventy-bazillion of them) the Performance diff can figure out the grip surface of the road (using wheel-speed sensors) and then tailor the amount of diff lock according to speed, yaw angle, steering input and bullion prices (probably). 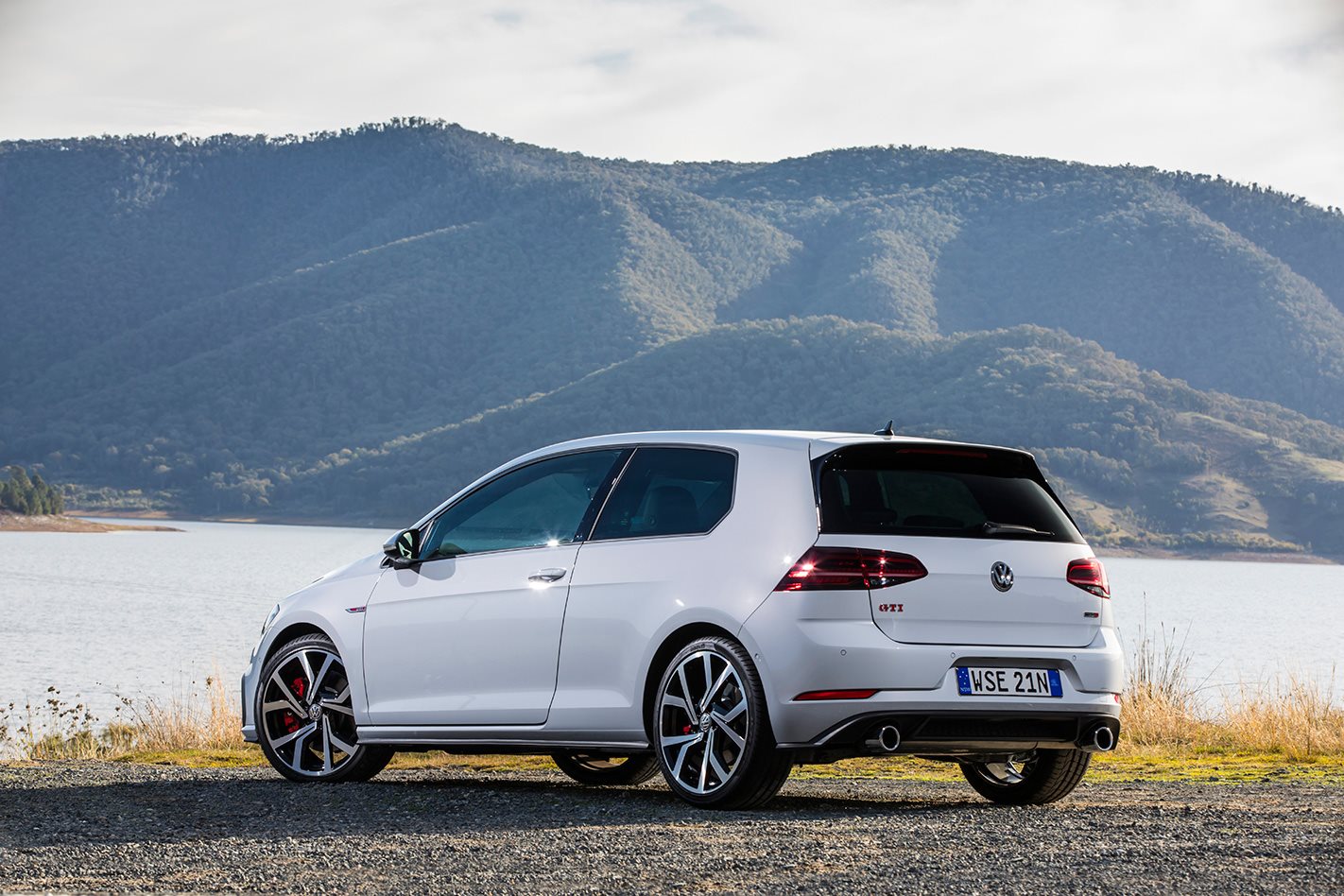 VW reckons it’s an actual active system, since the info gathered leads the diff to the correct output profile before any slip happens. It can’t actually see down the road, but it’s about as good as it gets for now.

The engine sure feels and sounds familiar with that trademark degree of wholegrain feedback that is mostly the result of an electronic sound synthesiser that bolts to the firewall and feeds the good vibes into the cabin. Synthetic it may be, but it really gives the Golf some soul and timbre and since it’s not the actual engine’s harmonics grumbling from the engine bay, it all stays smooth and refined.

Not sure whether anybody ever found the six-speed DSG lacking ratios, but it remains that the new (to the Golf line-up) seven-speed has given the thing even longer legs. Cruising along at 100km/h now involves the use of just 1700 or so revs and in manual mode, it’ll still hold on to that gear until you push the throttle pedal beyond the kick-down switch. 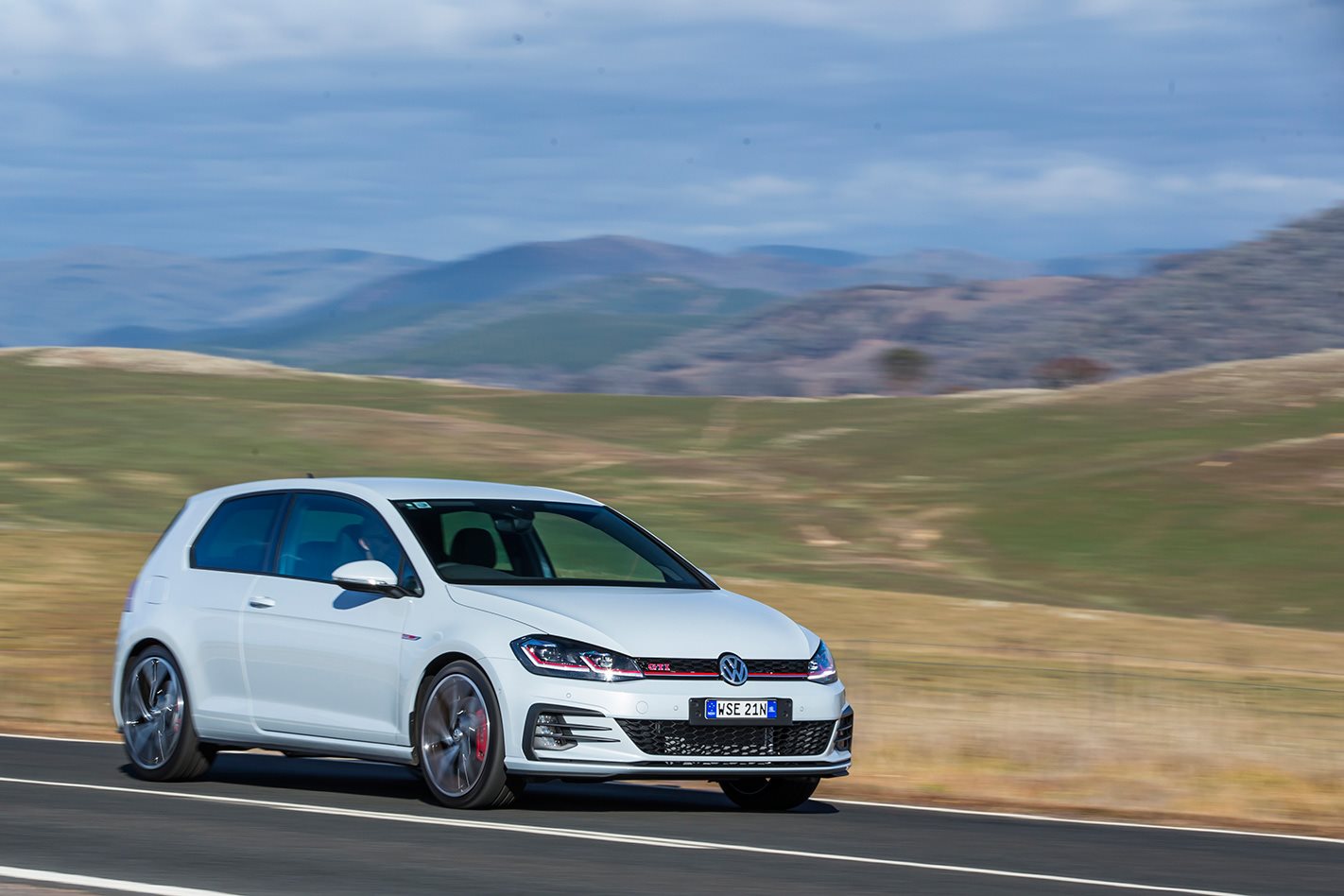 Manual or auto mode, though, the DSG shifts fast and sure and retains all the qualities that have made it the gearbox of choice for about 80 per cent of Golf GTI buyers in recent years.

And when you start belting the thing and cracking it down through the gears manually, the Golf really gets on with it. It revs enthusiastically and it revs hard and, with that seamless string of ratios to keep feeding it, it’ll be flashing some pretty big numbers on the digital dashboard before you know it. VW claims it hits 100km/h in 6.2 seconds, giving the GTI Performance as much shunt as pretty much anything hatchy out there at its price point.

The drive-mode stuff remains as it was, and maybe it’s just me, but I reckon that Sport mode is a tiny bit less frenetic this time around, making it an actual, useable setting. Prior to this 7.5 version, Sport mode seemed to be too wild-child, too eager to hold a lower gear and too, um, psycho to be a viable on-road setting. Not any more. 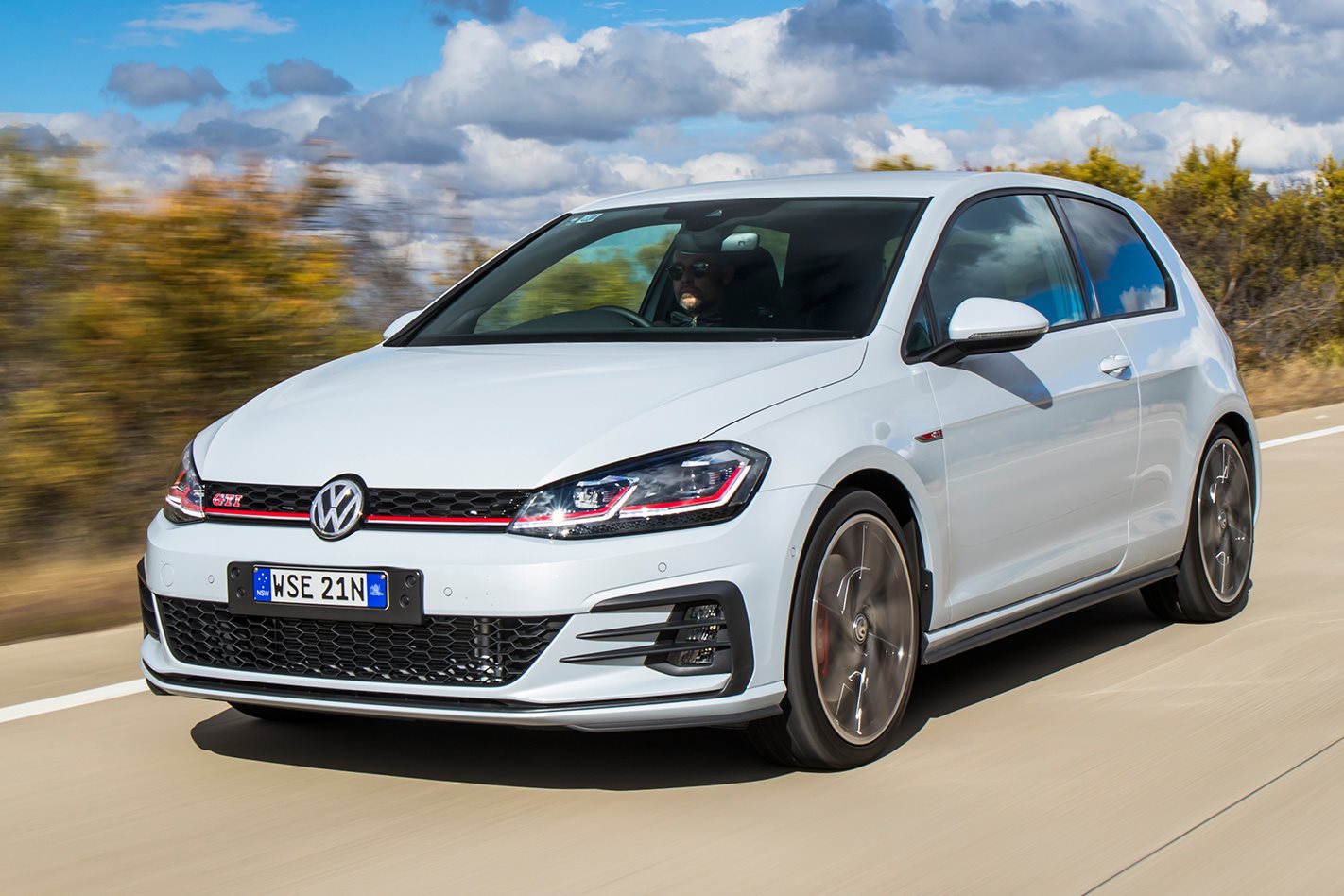 Steering? Well, it’s probably fair to say that the VAG take on electrically-assisted steering is still the best in the biz. It’s accurate and the weighting is bang on the money, while the variable rack (where the teeth are closer together towards the extremes of the rack) allows for a neat two turn lock-to-lock without making the car nervous or fidgety in a straight line.

In fact, that level of detail is a metaphor for the whole car; it’s measured and intelligent, but it can still show a clean pair of heels to pretty much anything with a hatchback layout and a price-tag south of $55,000.

Which, of course, is the other way of determining that not a whole lot has changed. But since the rest of the hot-hatch world is still playing catch-up, that’s a luxury only a car as resolved as the Golf GTI can afford.

4.5 stars out of 5
Likes: Sharp, accessible, practical. Holy trinity right there.
Dislikes: No manual option for the real hard-heads. 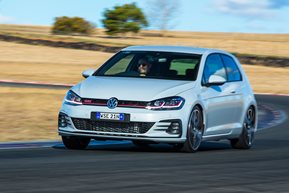