BMW flips the script with an all-wheel-drive mega sedan that reinvigorates the M5 brand.

This is BMW’s sixth-generation of M5, dubbed F90. It’s the follow up to 2011’s fast but uncharismatic F10 and it seeks to raise the bar for performance while reconnecting with the M5 legend.

We previewed the F90 M5 in prototype form almost a year ago, and now the fully fledged car is on Aussie terra firma it’s time to reacquaint ourselves. There was a time when an M5 was the ultimate tool for moving five people and their luggage quickly and comfortably. Is it back on form? The F90 is a shot in the arm for the M5 legacy. It honours the legend and moves the marque forward in disruptively different, brutally fast fashion.

PLUS: Broad and brilliant skillset; duality of character; build quality
MINUS: Rear-wheel-drive mode has purist appeal, but limited function; exhaust sound could be sweeter BRAND heritage is a fractious double-edged sword for car makers. It’s what emerging marques covet, established players safeguard and marketing types leverage, but for engineers and designers charged with vehicle development, heritage is a volatile thing to manage.

BMW M has brand cachet in ready supply. More than 45 years of motorsport success and an established back catalogue of intoxicating road cars have built a legendary reputation the business now trades on. Its vibrant history is part and parcel of the modern day M-car appeal, but some of the company’s recent product offerings have fallen short of the magic the M badge promises.

The last-gen F10 M5 is one car fitting of that description. It pushed performance boundaries with a savage twin-turbo V8, but was regarded as somewhat anodyne and lacking in vivacity. BMW M has since had success recapturing its spirit with the M2, and the all-new F90 M5 arrives at a time of renewed optimism in the minds of enthusiasts. 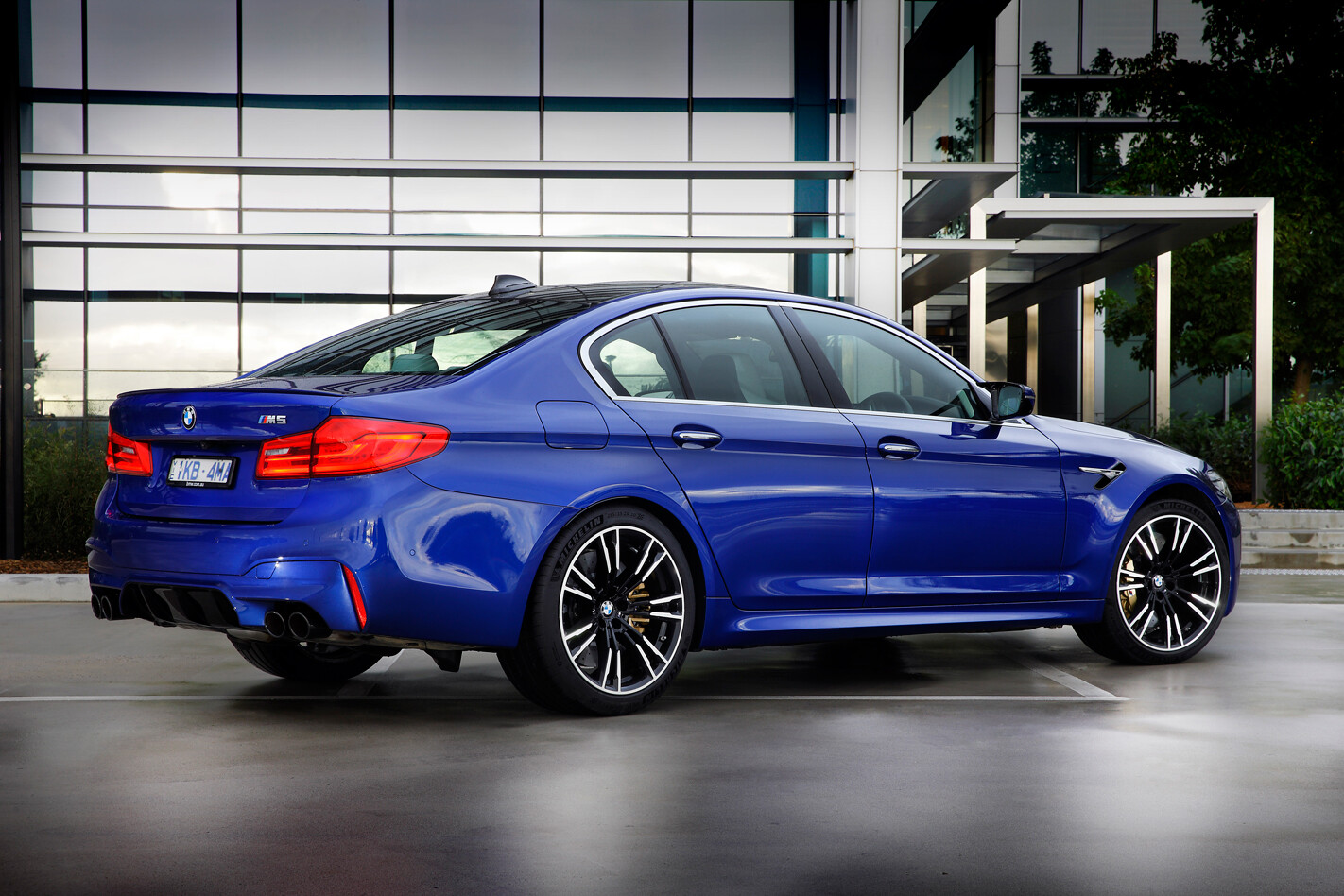 It takes an open mind to approach the F90 M5 objectively. On paper the concept of an all-wheel-drive M5 that willingly turns its back on a rear-driven legacy that spans three decades throws up a red flag. How could it possibly live up to the purity of those early pacesetters that established the badge’s credibility?

In pure numbers the F90 makes a statement of intent. Its revised 4.4-litre twin-turbo V8 produces a ballistic 441kW and 750Nm. Those outputs are up by 29kW and 70Nm over the F10 thanks to bigger turbochargers and a rev ceiling that's been raised to 6700rpm.

Embracing M’s xDrive all-wheel-drive system that was first developed for M variants of the X5 and X6 slashes the M5’s 0-100km/h sprint by a significant 0.8sec compared to the F10. The F90 cracks triple digits in 3.4sec to equal AMG’s colossal E63 S, even with a 9kW/100Nm deficit. A reduction of its kerb weight to 1855kg has helped. The F90 tips the scales 15kg below its forebear despite lugging bulky AWD hardware. It is far from light, but it makes the 100kg tubbier E63 S seem obese.

Suspension componentry sheds 5.5kg and a carbonfibre roof saves 21kg compared to the optional tin-top and sunroof. Tick the box for carbon-ceramic brakes ($16,500 for front and rear) to shave another 23kg of unsprung mass, and gain track-ready stoppers and gold calipers.

A new bi-model performance exhaust is 5kg lighter, linked to a button on the centre console that’s switchable independent of drive mode. Open the channels and bury the throttle to prompt an aural offensive from the back-end that’s raucous enough outside the car to make bystanders flinch. It’s not an especially melodic sound, but it’s suitably theatrical. Blasting through gears is no longer limited to the seven ratios of the F10’s dual clutch ’box. A model-specific eight-speed torque converter auto comes with the move to xDrive, supported by a transmission cooler for consistent track performance. It’s exceptionally good; smooth and quick, and expertly calibrated.

The F90 by default runs in AWD with a near even torque split that prioritises traction, and it’s almost unflappable even when pressing on. A tap of the DSC button enables M Dynamic Mode, which shifts the M5’s all-wheel-drive underpinnings into 4WD Sport. This rear-biased calibration opens up the car’s dynamic flexibility without completely doing away with its electronic stability aids. It’s in this mode that the new M5 is at its most fun, allowing for throttle steering through tighter corners and rewarding a deft touch with tasty degrees of slip angle.

Where the M5’s AWD system differs from the related X5/X6 M's is in its switchable rear-wheel-drive mode. An on-command RWD function sounds like the best of both worlds, and given a bottomless tyre budget and a racetrack it’s the ideal way to obliterate 285/35 Pirellis for a laugh, but its usefulness on-road is limited to the handiest of helmsmen and the very brave, as all stability assistance must be turned off to enable it. In the M5’s case, its seemingly endless electronic systems aren’t to be lamented. Clever tuning delivers adaptable temperaments that make it both supremely liveable yet still able to dial in a liveliness that defies its size. Its fast electrically assisted steering is a massive step up from the F10 M5’s, and all other electronic systems operate in phase with one another. It is incredibly easy to drive this car fast.

Its beautifully trimmed and supportive front seats leave nothing to be desired, and though the techy cabin plays it safe from a design point of view, its build quality is outstanding. Dashes of luxe touches like illuminated M5 insignias on the headrests and door sills, M-coloured stripes on the seatbelts and stitching on the steering wheel, and an enormous head-up display elevate the cabin experience above a regular 5 Series. It’s only natural to compare BMW’s reinvigorated M5 with its arch-nemesis from Affalterbach, and there will be time for that match up in the near future. On first encounter, M’s mega sedan pulls up short of the E63’s overt boisterousness, and makes less of an initial statement, but that’s somewhat in keeping with its M5 DNA.

There are layers to the M5 experience that will take time to fully appreciate. Its execution is meticulous and considerate, with a focus on function that has been a hallmark of BMW M since 1972. The F90 M5 carries a weight of expectation, and it doesn’t disappoint.