There’s a certain soundtrack to the XJR575. It’s not just the threatening growl as the engine bares its teeth, or the low-down bawl evacuating the quad exhaust pipes. It’s not even your own squeals of joy as you mash the pedal, only to be pinned back against the seat by a fist of unholy torque.

It’s something more subtle, lurking in the background; the slow, inevitable tick-tock as Father Time counts down the lives of ludicrous luxury sports sedans like this one.

Those with a glass-half-empty worldview might start singing sad hymns and sending flowers to Jaguar HQ. The more upbeat, however, will want to praise the company for building an old-school, tarmac-guzzling fiend in a world now dancing to the tune of sparkly hybrid-electric tech and sanitised SUVs. Whatever way, the new XJR575 is the high-performance pinnacle of Jaguar’s flagship range (and perhaps a cunning way of glossing over the fact that the XJ hasn’t actually had a proper update since 2009), tested on the freeways and hill roads outside of Porto in northern Portugal.

You know how most people eat with their eyes? At kerbside this car whets the appetite immediately, mainly due to its two feisty exclusive colours: Velocity Blue and the military-influenced Satin Corris Grey, a shade so tough – or over the top – Kim Jong-un probably decorates his bedroom with it. Gloss black 20-inch alloys, low air intakes and twin bonnet louvres add to the anticipation. 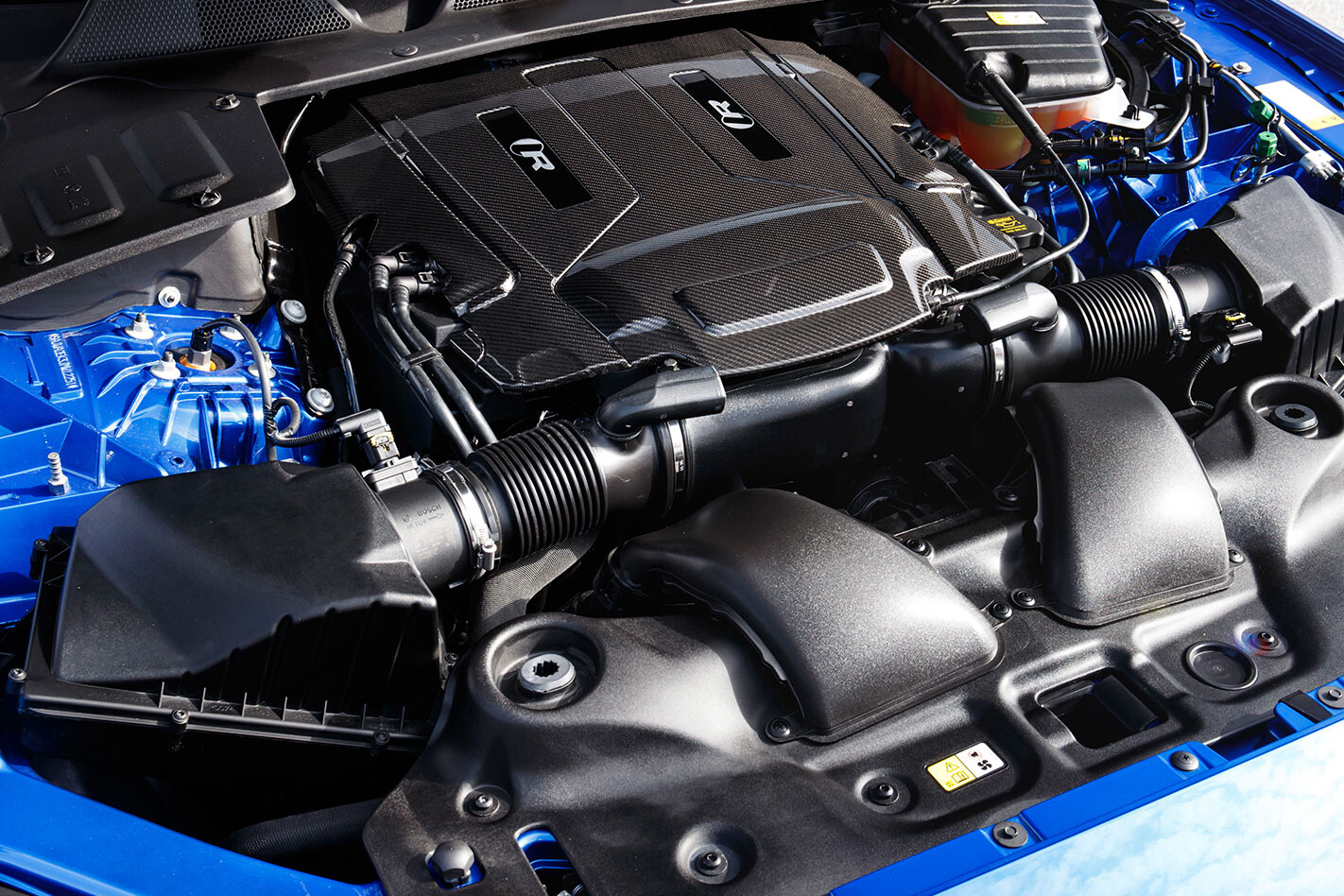 That’s one of the USPs of modern Jaguars; they tend to have more character than some of their blander German rivals. The XJR575 bristles with personality from the moment the starter button is pressed, its supercharged 5.0-litre V8 unit sounding full of potential at idle. Stomp your foot to the floor and you will be thrust into your seat by the sheer physics of this thing, all that torque chopping you in the stomach, a delirious reminder of how good it is to be alive sometimes.

But the XJR575 doesn’t follow its theatrical opening salvo with an upper-cut, knocking the fun out of you. After the boisterous start – from zero to 100km/h in 4.4 seconds – the whole experience smoothes out somewhat as the Jaguar surges assuredly through the eight-speed automatic ZF ’box. 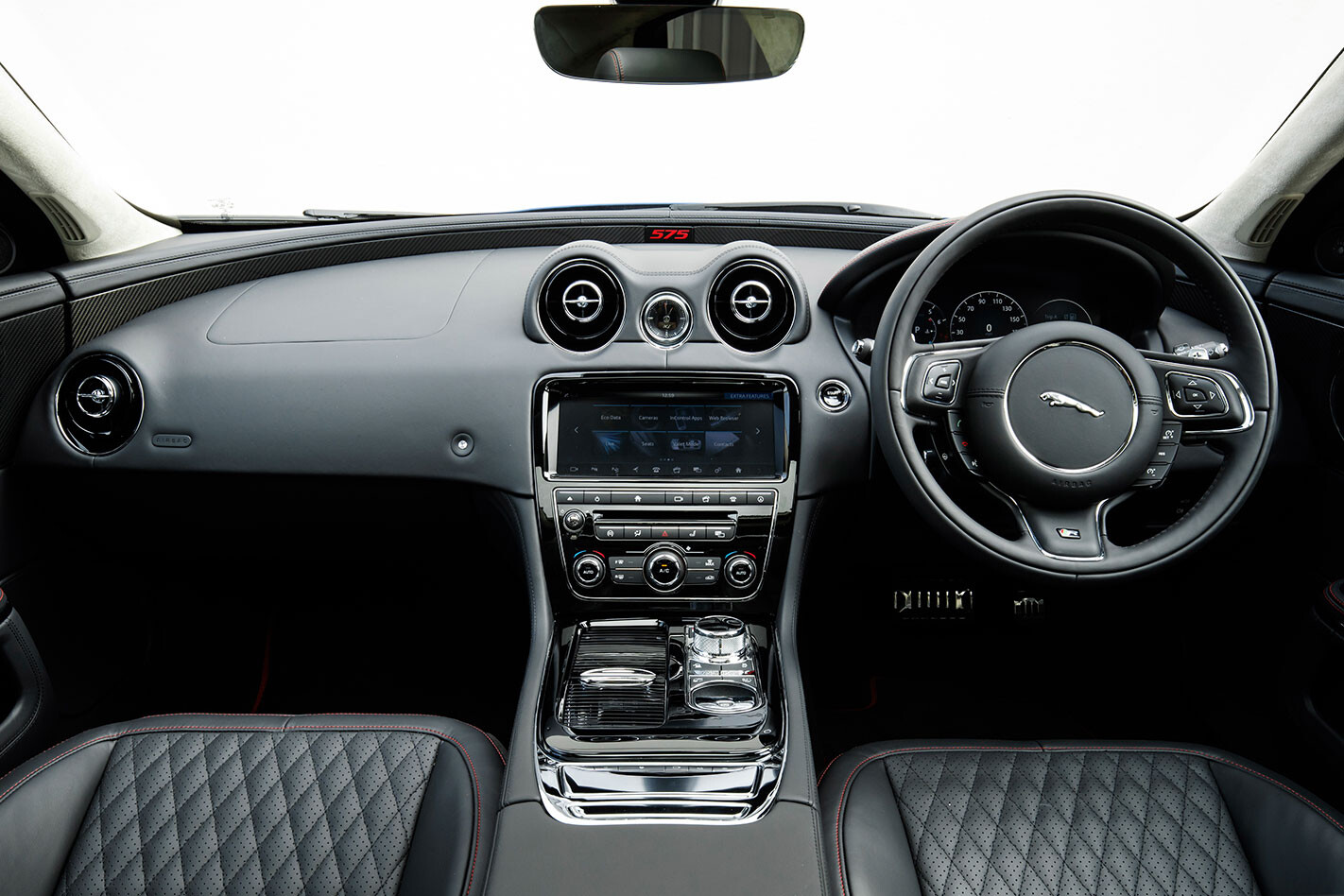 You expect a street-slugger; it’s more of a Shaolin monk. Potentially dangerous, but disciplined. Perhaps it’s Jaguar’s (very British) way of quietly reminding drivers that this is, after all, a limo, and executive rides are supposed to display some level of refinement.

MOREJaguar XJR takes on the Alpina B7 and Audi S8 Plus

Even so, the XJR575 is engaging and insanely fast on any type of road. In a straight-ish line on Portugal’s highways, even deep into the rev range there are never-ending pockets of power and torque waiting to be plundered – a fact borne out by the powerplant’s numbers: 423kW at 6250-6500rpm and 700Nm at 3500-4500pm, all channelled through the rear wheels only. 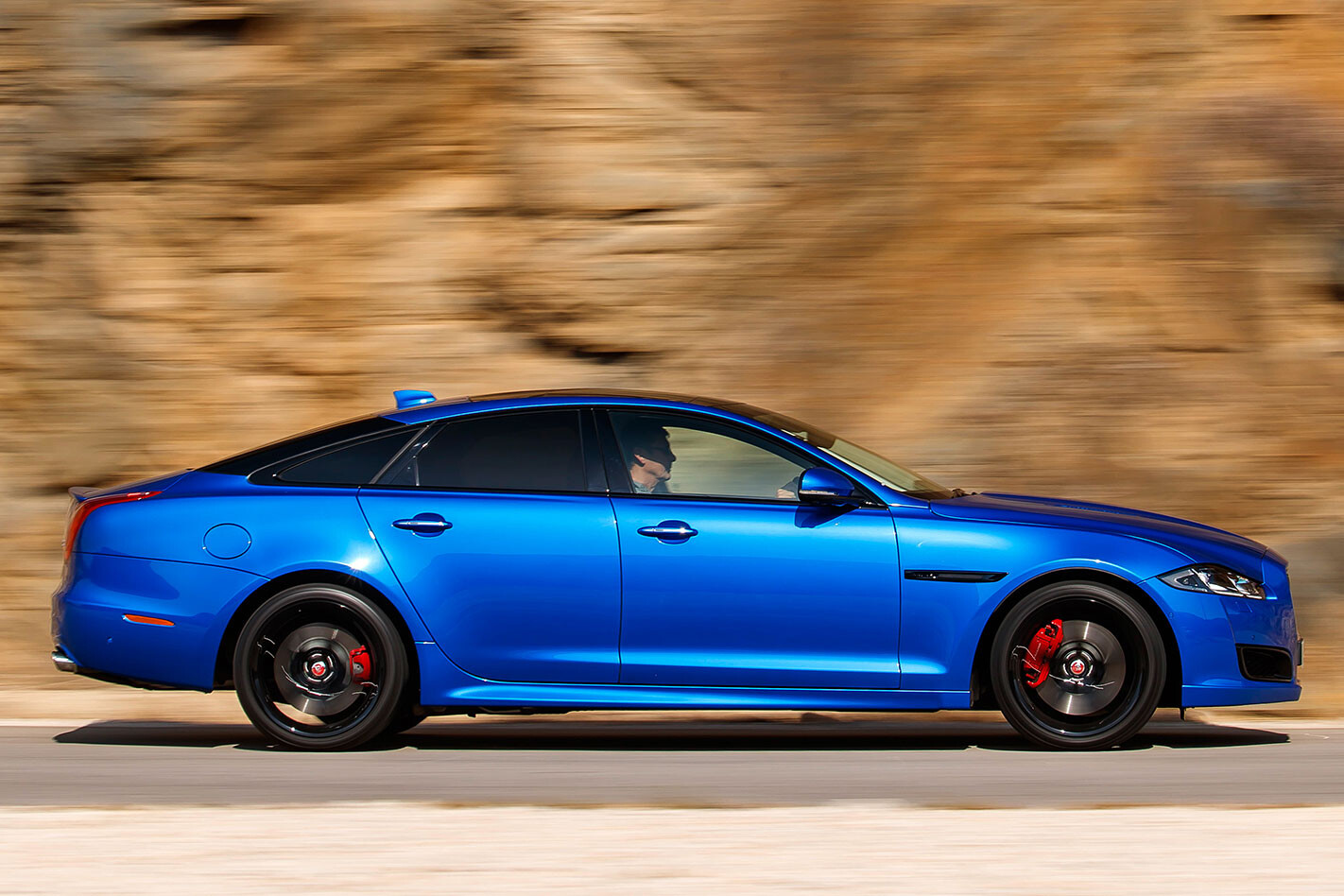 Top speed is 300km/h, and everything about the way the Jaguar behaves suggests the car wouldn’t chuck a hissy fit at fruitier velocities. Unless all four windows are down, the cry of those eight cylinders won’t ruin your day, although some wind rush is noticeable at speed.

As befitting a premium sedan costing north of $300,000, the double-wishbone suspension smoothes out most bumps, even on Portugal’s gnarlier mountain tracks.

It was in these conditions that we expected the beefy Jag – 5.13-metres long, 1875kg – to show some glaring limitations. But it didn’t, by and large.

Powering out of tight corners, the colossal 295mm-wide rear rubber continues to handle all that torque and the car remains surprisingly athletic yet firm for a big horizontal wardrobe. Electric rather than hydraulic steering now features on all rear-driven XJs, but feedback is still communicative, though if a touch heavy after prolonged periods of twisty hill work. Get idiotic and the Jaguar’s tail will kick out slightly, but overall the whole experience is still very well-mannered, very classy, very Jaguar. After all, it has to cover that brief as well.

Long may it defy that slowly ticking clock.