Described by one AMG representative as a ‘soft landing into the brand’, the Mercedes-AMG CLS53 is an aesthetically enhanced, coupe-like alternative to the more conventional E43 sedan, with a moderate, rather than ballistic, level of performance and a focus on technology. This third-gen model introduces a range of firsts for AMG, including an electrified drivetrain based around a fresh inline six-cylinder engine. 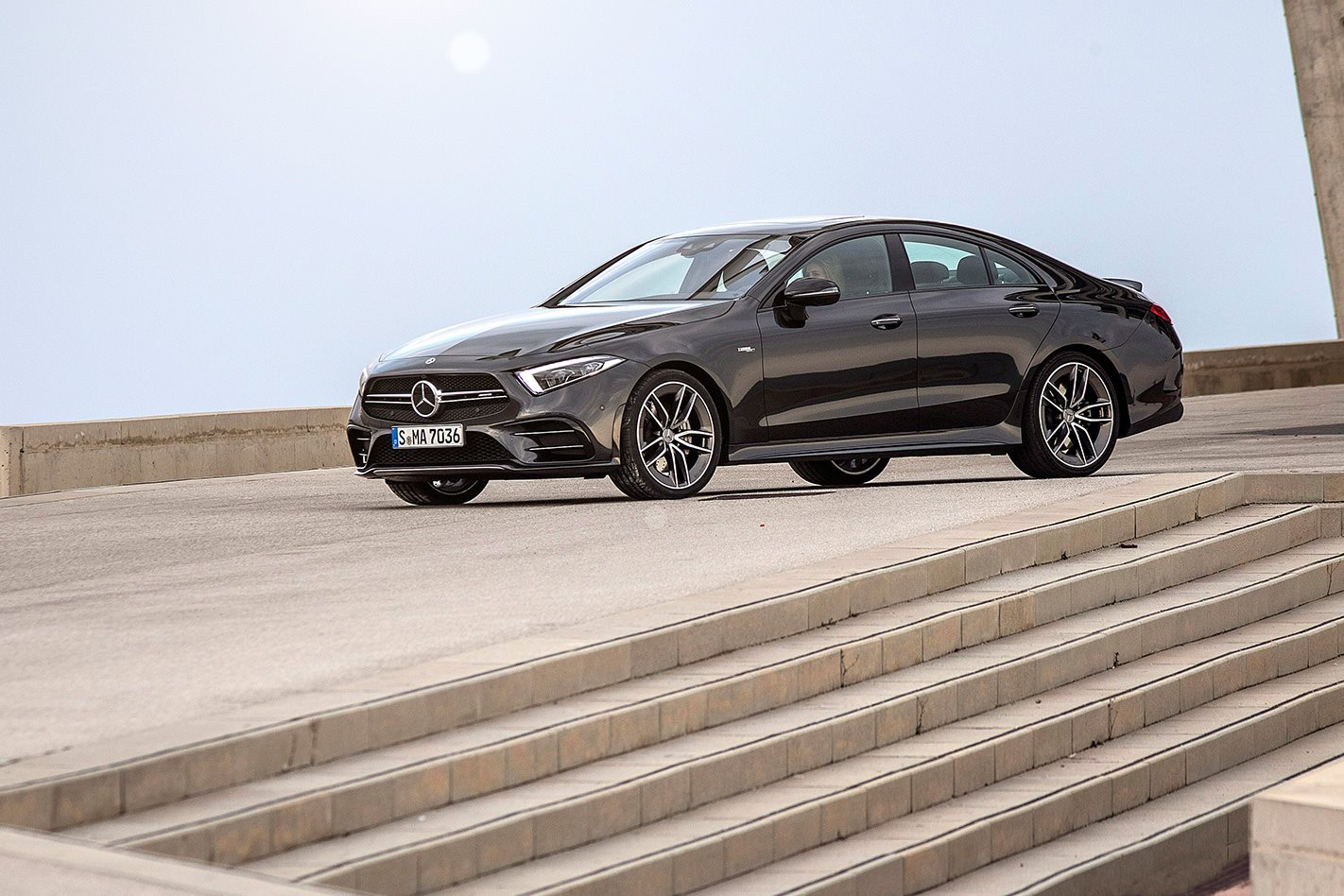 Australia has a stronghold as one of AMG’s most significant markets, and this is our first opportunity to sample the third-gen CLS and all that it brings to the table for the performance car brand. It’s a sign of things to come from Affalterbach’s looming inline six-cylinder vehicle range, and sets a tone for future Mercedes-Benz and AMG products in terms of design and technology.

If you only associate the AMG brand with raw, hard-edged V8 sedans and, to an extent, the absence of refinement, then the Mercedes-AMG CLS53 will be a surprise. It is a much more relaxed and sophisticated AMG than that. Affalterbach’s first electrified drivetrain is a success from a comfort and economy perspective, and delivers enough punch to pass as a performance engine in the context of this grand tourer. When the CLS53 arrives in Oz with AMG’s Performance exhaust, it should be even better. 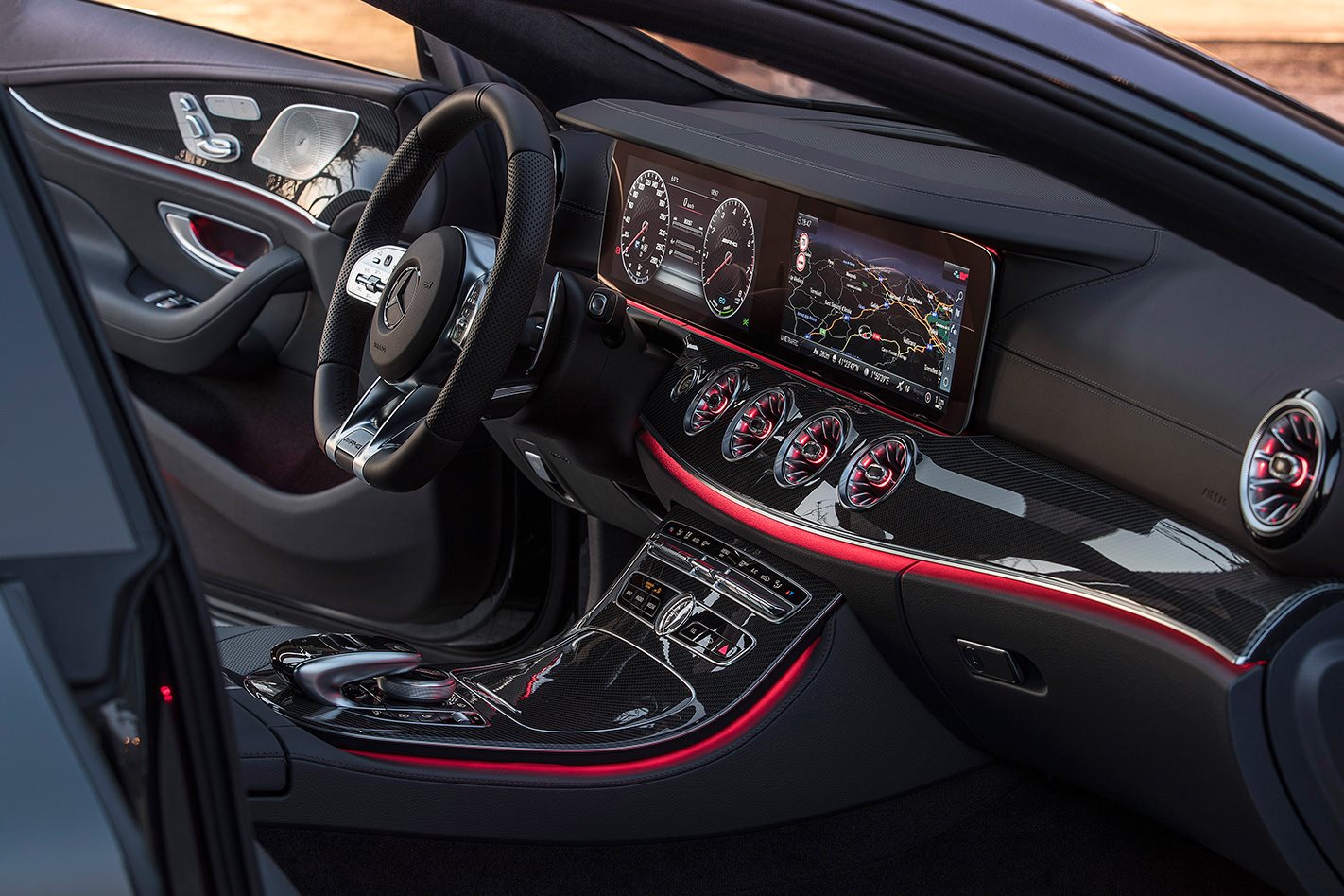 PLUS: Clever tech delivers torque and economy; refinement; cabin quality; exclusivity
MINUS: We have to wait to hear the new inline six sing; appetite for tyres and brakes

BACK in 2004 Mercedes-Benz released a trendsetting cat among unsuspecting pigeons. It was the first CLS, the original four-door coupe, and it became a prototype for followers such as the Audi A7 Sportback and BMW 6 Series Gran Coupe. Think style-driven fastbacks with price premiums on top of the three-box sedans that gave them their platforms.

Stuttgart’s niche CLS has never been a breakaway sales success, but Benz has used the exclusive E-Class alternative as an entry point for selected high-end technologies such as its Multibeam LED headlights. The just-launched, third-generation CLS presents a spread of firsts from the base model up, and is at its most innovative in flagship AMG guise.

The CLS53 is the debutant of an incoming range of 53-badged AMGs, all of which will feature Affalterbach’s first electrified powertrain based around a freshly developed 3.0-litre inline six-cylinder engine that produces 320kW and 520Nm without battery assistance. A large, traditional turbocharger feeds boost from mid-range onwards, while a small electric turbine fills in the gap from idle. Combined, the powertrain delivers a fulsome 520Nm thump of peak torque from 1800 to 5800rpm. 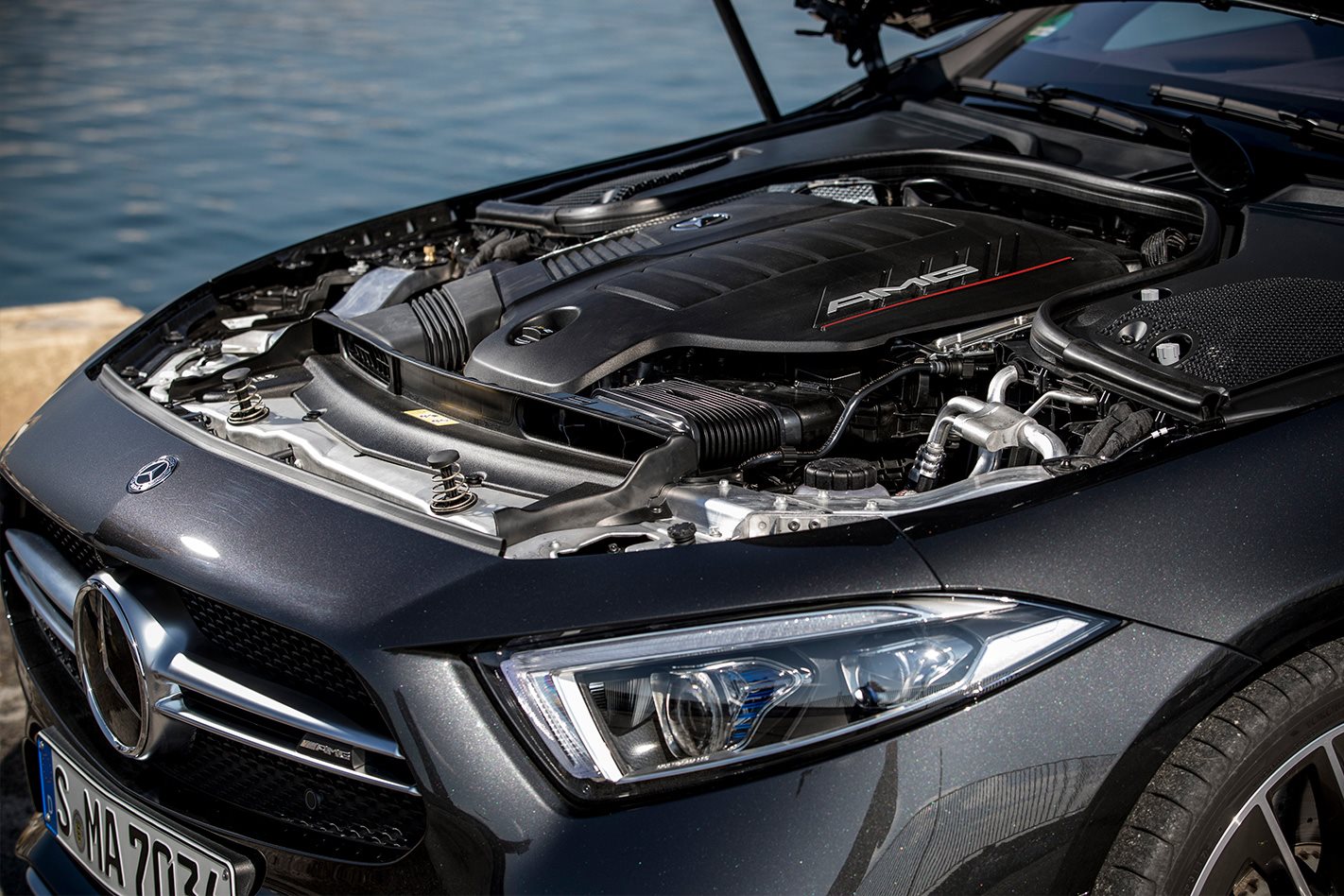 A 48-volt electrical system drives the smaller turbine and removes the need for a conventional starter motor and alternator. Instead, an integrated starter/generator (ISG) sits in place of a flywheel between the engine and nine-speed automatic transmission. The ISG generates 48v charge when the car is moving, and can use that electricity to spin the crankshaft directly, adding up to 16kW and 250Nm of drive at low revs, or to restart the engine after coasting in ‘Sailing’ mode. Mercedes calls the system EQ Boost.

From a design perspective, CLS is the first Mercedes to enter the market with designer Gorden Wagener’s forward tilting, shark nose silhouette and triangular headlight design that will define the next A-Class, and others. The CLS’s body is longer, lower and wider than the E-Class it shares underpinnings with, and has a more pronounced bonnet extension after Wagener moved its A-pillars and windscreen backwards.

AMG has had a go once before at making a sporty handler out of this large, mid-range performance car in creating the E43. Both it and the CLS53 sit on an MRA foundation and identical 2939mm wheelbase, though AMG says nothing has been carried over in the evolution to CLS53. Adaptive air suspension is standard, but the 140kg heavier CLS gets different mounting points, revised bushings and unique calibrations for each of its drive modes. 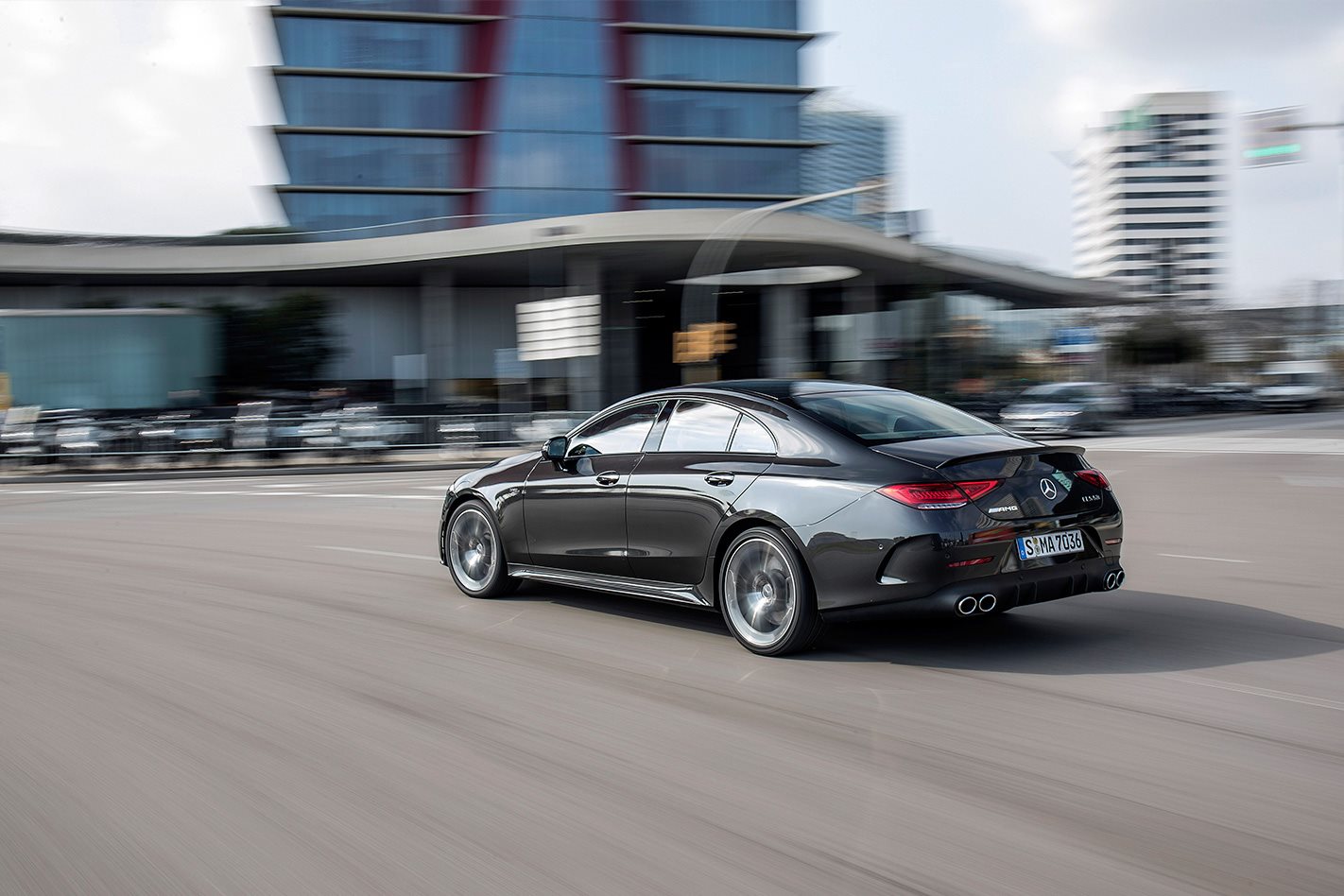 Ride quality errs on the firm side of things but never approaches E63 S levels of severity. This is a feeder car for the AMG brand, again much like the E43 halfway house. There’s a sporty demeanour to the way it goes about its business, yet across smooth European roads the CLS is a skilled cruiser with space for five people – one more than the last CLS. However, the airbag setup does exhibit the same weakness as the E43, where failure to slow sufficiently for speedbumps and driveway entrances will shoot a sudden jolt through the struts and into the cabin.

Back-to-back with a CLS450 powered by the same inline six, sans AMG’s electric compressor, the CLS53 revealed itself as a markedly more confident car when driven into corners quickly. It is a heavy machine, but better tyres (in this case Advans) make a significant difference to the 1905kg car’s willingness to turn in. The steering itself is crisp and more responsive with AMG’s fettled variable ratio tune, and the 53’s brakes are stronger and resist fade for longer, though everything is worked hard when pushing on.

Unlike lesser models, the CLS53 has variable all-wheel drive called 4Matic+, which can send up to 100 percent of torque to the rear wheels, and it does a fair impression of a rear-driver when encouraged. Power delivery, though, is a little different to expected. The smooth six and its twin turbines deliver big torque low down, but it takes a split second to build up rather than firing out of the blocks with the immediate shove of a plug-in hybrid or full EV drivetrain. Acceleration is rapid at 4.5sec to 100km/h, and it feels quick, but the advantage of EQ Boost will almost certainly be in the fuel figures rather than outright performance. Claimed economy is 8.7L/100km. 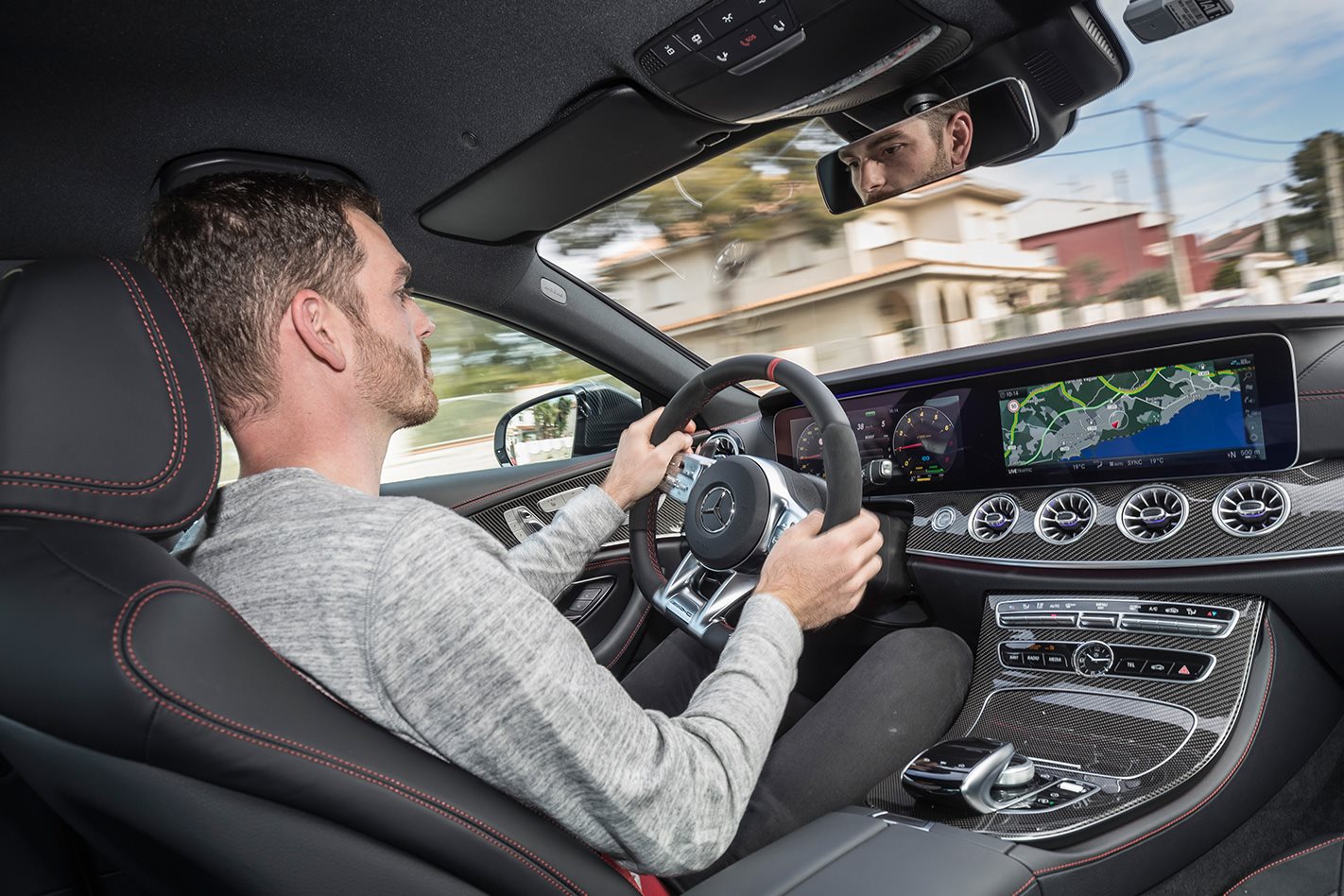 One major attraction of the inline six engine format is the sound. But, we’ll have to wait for the CLS53 to arrive in Australia with a standard bi-modal Performance Exhaust before we can pass judgement. There’s a sonorous tone lurking in there somewhere, but all European test cars were fitted with particulate filters and a relatively quiet set of pipes, neither of which Australian variants will get. In the meantime AMG has added synthesised sound to aurally bulk up using the cabin speakers, something company boss Tobias Moers once said he would never do.

Those speakers are everywhere – including in the roof – in CLS53 models optioned with the premium Burmester stereo. Much of what makes the E-Class coupe so desirable inside features successfully in the CLS53, with a selection of original pieces such as the AMG Performance steering wheel and coloured LEDs illuminating the turbine air vents in what is set to become a Mercedes-Benz signature. Seats with active bolsters that move to support occupants during cornering will be standard in Oz. Elsewhere, red stitching, carbonfibre and Alcantara tick all the right AMG boxes.

Affalterbach has an interesting car on its hands. There is no CLS63 in the pipeline – that spot has been taken by AMG’s standalone GT 4-Door – so the measured CLS53 is it as far as a range flagship. It’s one of the most refined AMGs of recent times, and will give the brand something else to offer customers when it arrives in Oz late this year priced from $179,990. But who is it for? AMG says it’s not the customer looking for ultimate Nurburgring thrills. The CLS53 has to perform at a track day, but also double as a grand tourer. It’s a progressive AMG that brings electricity to the party, but there’s traditional Mercedes-Benz flavour lurking beneath this one’s designer suit. 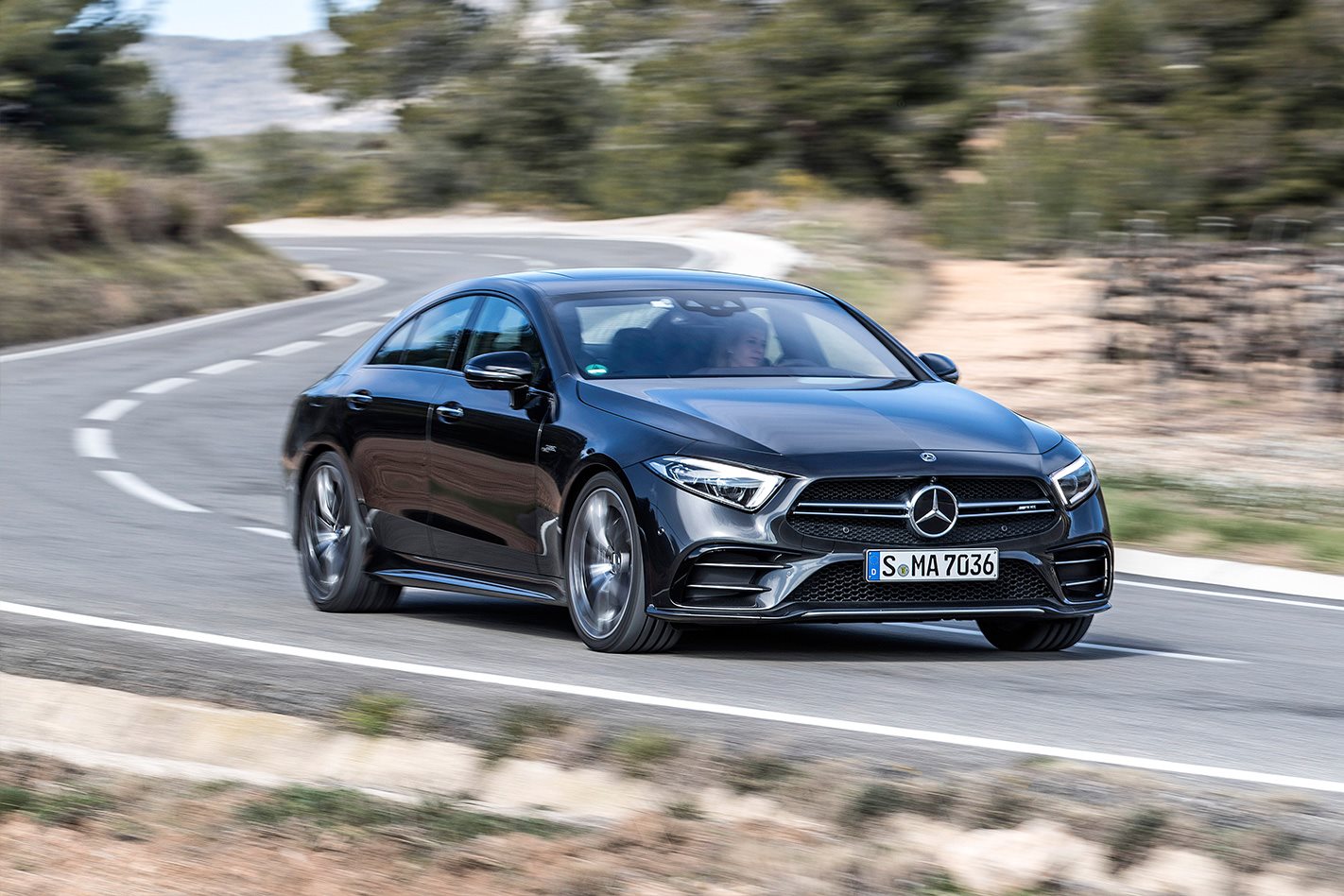 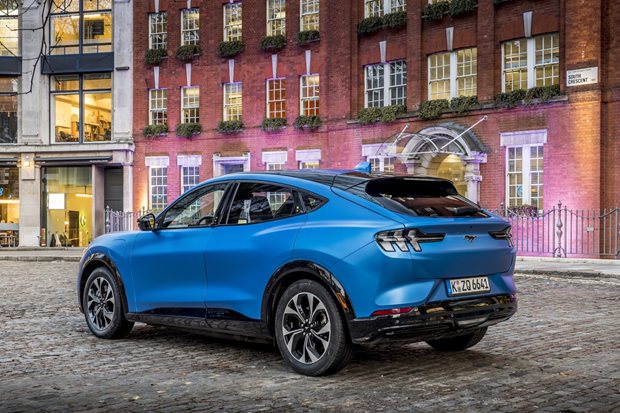 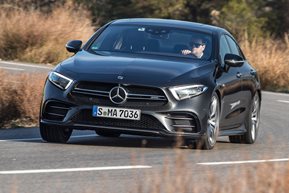