An engine downsize has not blunted the razor-sharp edge of AMG’s big, bad super sedan

The updated version of Mercedes-AMG’s S-Class-based limousine. Out has gone the boosted 5.5-litre V8 and in its place is a smaller 4.0-litre twin-turbo unit.

As part of the 2018 refresh, the S65 V12 turbo version has been discontinued (reborn as a Mercedes-Maybach) which promotes the S63 to the position of performance flagship for the Mercedes-Benz S-Class range. In addition to the significant engine rearrangement, the S63 also gets a new nine-speed automatic transmission in place of the seven-cog unit, while the interior and equipment has been treated to a refresh as well.

In addition to the more obvious comparisons of old mechanicals versus new following the S63’s mid-life update, a more general assessment of the variant’s relevance is also necessary.

If Mercedes-AMG’s mantra revolves primarily around driver enjoyment and not passenger satisfaction then why make the S63 available only on the long wheelbase chassis? If this updated version really is about the driver then surely it should be offered in the lighter, short wheelbase version, which forfeits some rear seat space and comfort for a large sedan that is more focused on keeping the person at the helm happy.

Comfortable and silky when you want to forget the outside world but surprisingly involving when you want to want to get intimate with your surroundings, the S63 L is one car that can perform two very different tricks.

WHY, in the automotive world, is power synonymous with luxury? It’s not as if 400kW makes a car any more comfortable. If anything, getting from zero to 100km/h as quickly as you can say the make, model and variant could be regarded as slightly uncomfortable if relaxation is your main motivator.

So why does a Bentley Mulsanne have a turbocharged 6.8-litre V8 in its snout, why is the Rolls-Royce Wraith powered by 456kW and why does Mercedes offer an AMG version of its S-Class flagship sedan? 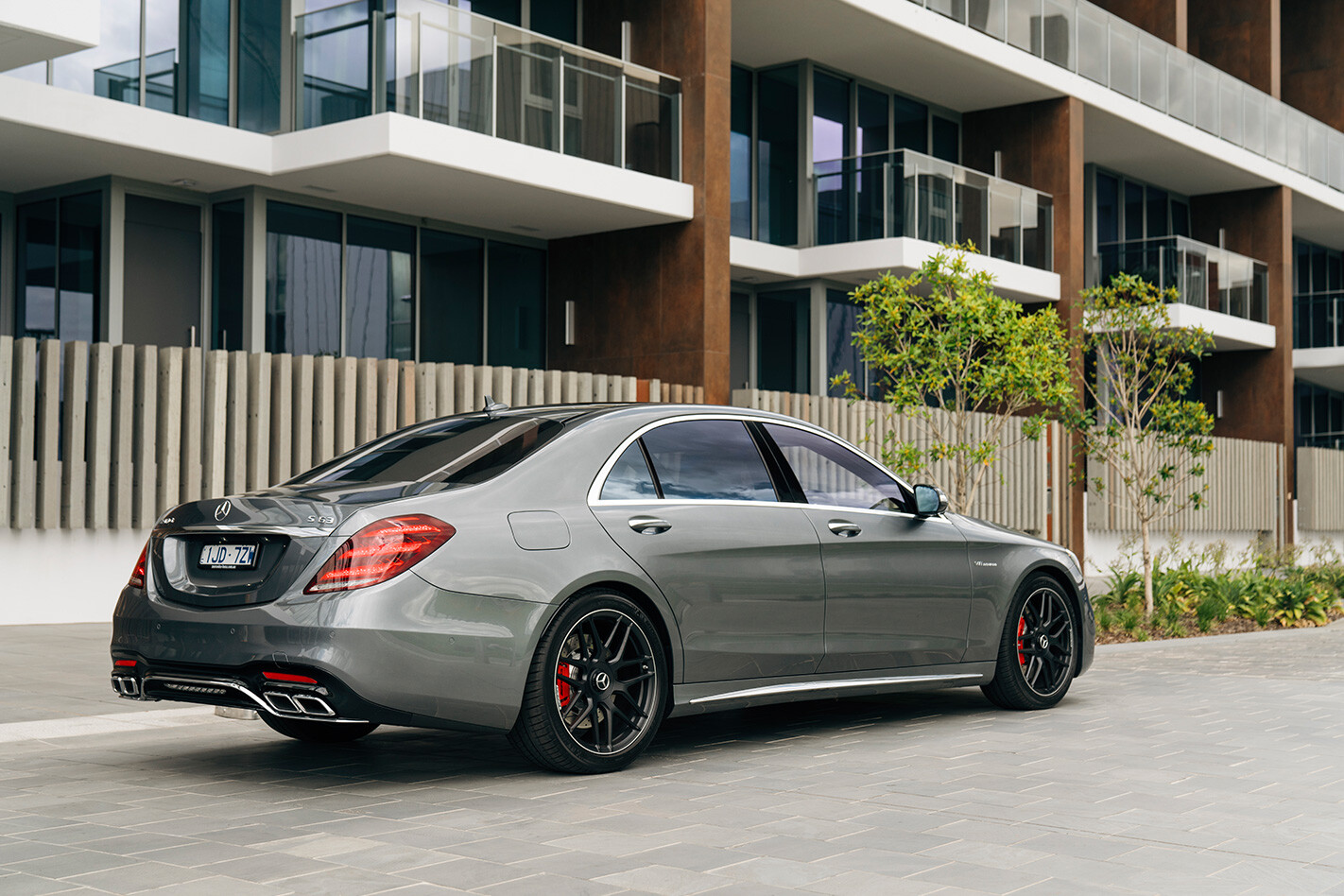 In its most affordable form, the S350d has a 210kW 3.0-litre diesel which is more than enough to whisk delegates to meetings on time or ferry a full load of passengers and luggage without becoming asthmatic on a hill (actually, it’s bloody quick with a 0-100km/h dash of 5.4 seconds).

If that simply isn’t enough you can have an S-Class with 250kW, 270kW or 345kW, all of which will embarrass hot hatches at the lights despite tipping the scales at two tonnes, which makes it all the more confusing to learn that the new halo of the range has a twin-turbocharged 4.0-litre V8 with 450kW. What on earth is it for?

During low speed limo duties, the monstrous hand-built engine is a sleeping dragon. Neither the typical AMG tailpipe report or fuel-guzzling characteristics of the previous 5.5-litre V8 are present, and you might almost believe you were in one of the non-AMG badged offerings if it weren’t for the acres of carbonfibre and indicative badges throughout the beautifully appointed interior. On a roadtrip out of Sydney’s soul-crushing traffic to Bathurst, the S63 provided the perfect environment for an overdue catch-up with a ride-companion and not once was the conversation interrupted by a series of crackles from the exhaust or retina-loosening gear changes.

On the contrary, despite having supercar power from a relatively small package, the turbo V8 is not a temperamental, irritable unit at low speeds that begs to be revved into the stratosphere. Instead it delivers smooth effortless torque from the get-go without complaint.

Its job is complemented by a nine-speed automatic that replaces the seven-cog of the previous S63 and is every bit as smooth in operation as the V8 it is bolted to.

Front seat accommodation is sublime with sports seats that adjust for parts of the body I didn’t know I even had, but the second row offers the best seats in the house. The AMG is only sold as the S63 L which, translated, is a long wheelbase version with extra space in the back. Sink into the leather, rest your head on the deeply cushioned headrests and the Eyre Highway would flash past faster than an Uber trip home after a heavy night. As a machine for wafting from one place to another, the S63 L is as accomplished as everything else in the S-Class range. So shouldn’t the $375,000 price prompt you to save the cost of a C63 convertible and order the diesel?

If you don’t intend to ever occupy the front seat then, yes, absolutely or perhaps go for the $222,500 S400d L which has a little more grunt and the longer wheelbase, but if you insist on taking the helm then the AMG does make a little more sense.

Find a more rewarding ribbon of asphalt than the Bells Line of Road, which is crippled by constantly varying speed limits, and you start to believe the badge on its hind.

First of all, it is fast. Spectacularly fast. In this state of tune, the hand-built AMG engine that powers a number of other models is in its most athletic form here with 450kW and 900Nm, and that grunt catapults the big sedan from its starting blocks with unbelievable energy. 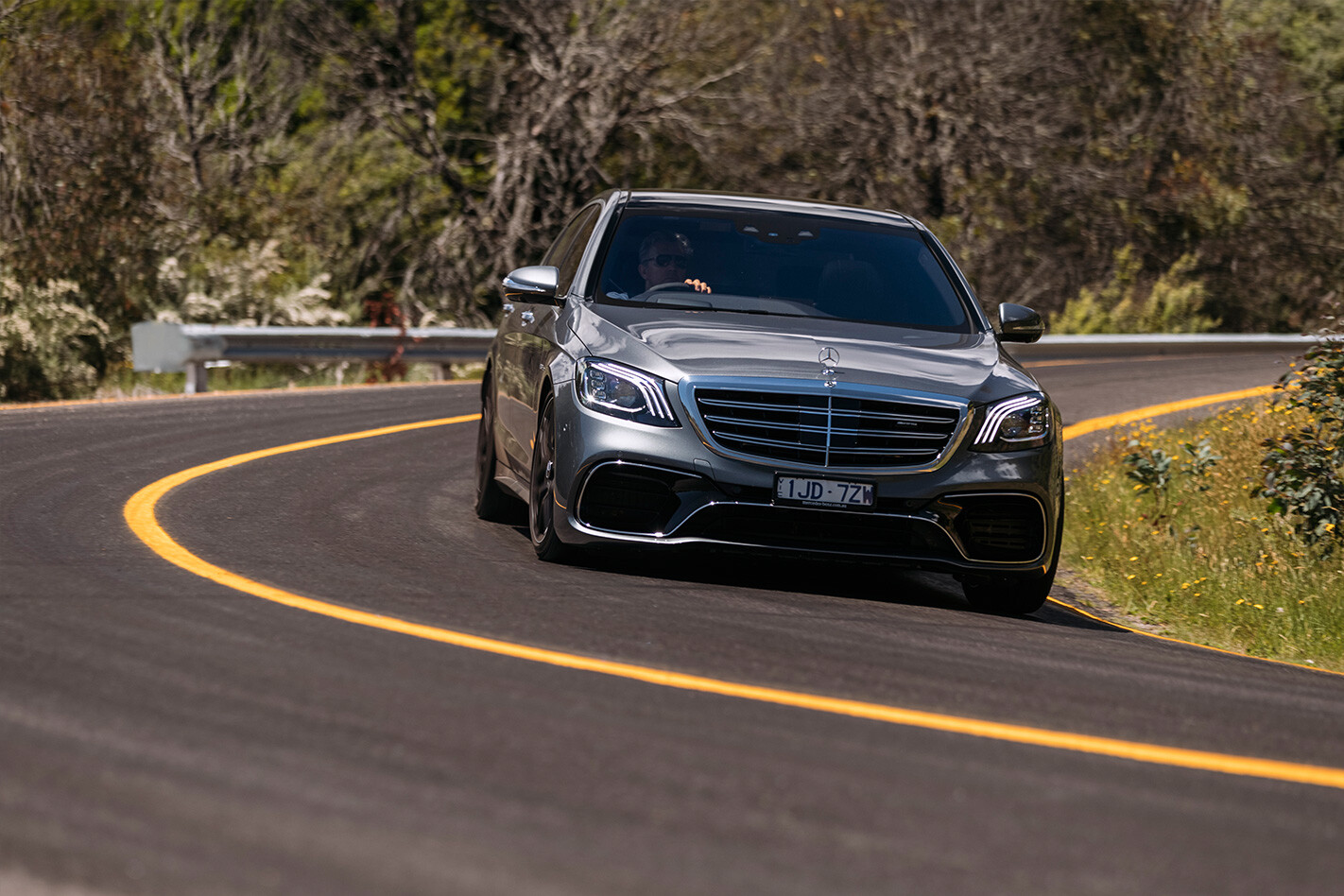 Four point three seconds is the official zero to 100km/h acceleration time and the S63 feels every bit as quick – an impressive feat given its 2045kg kerb weight.

Where the tailpipes were almost mute in comfort driving mode, the sportier settings release the typical AMG anthem that had previously been silenced by clever valves and mufflers.

And the surprises keep coming when you find a stretch of road carving its way through deserted NSW countryside. Once the adaptive dampers have stiffened up the chassis control and steering response has been sharpened by Sport mode, the big Merc can really tug at the leash.

With its extended wheelbase, the S63 L allows some shuddering through the body when attacking imperfect road surfaces, but has a remarkably stable footing. Cornering grip and traction is excellent for a car with 900Nm and only the rear wheels to get it all to the road. Body roll is almost completely absent, and the car’s heft adds to a sensation of unflappable stability, even when the road adds in some unexpected rises and humps.

But even fine engineering cannot defy physics forever and, with repeated hard braking, the massive iron discs started to show the signs of stress. A circuit is probably a step too far for this AMG if the braking limits can be glimpsed on public roads.

Piloting the S63 through twisty bits is more rewarding than I was expecting and not half as unnerving. It hides its size and mass admirably and rewards the driver as if it was frustrated driving sedately.

The new nine-speed transmission is as much of a pleasure when going fast as it is gliding along freeways. Grab a handful of gears with the paddle shifters and the unit is obedient and fast-acting. 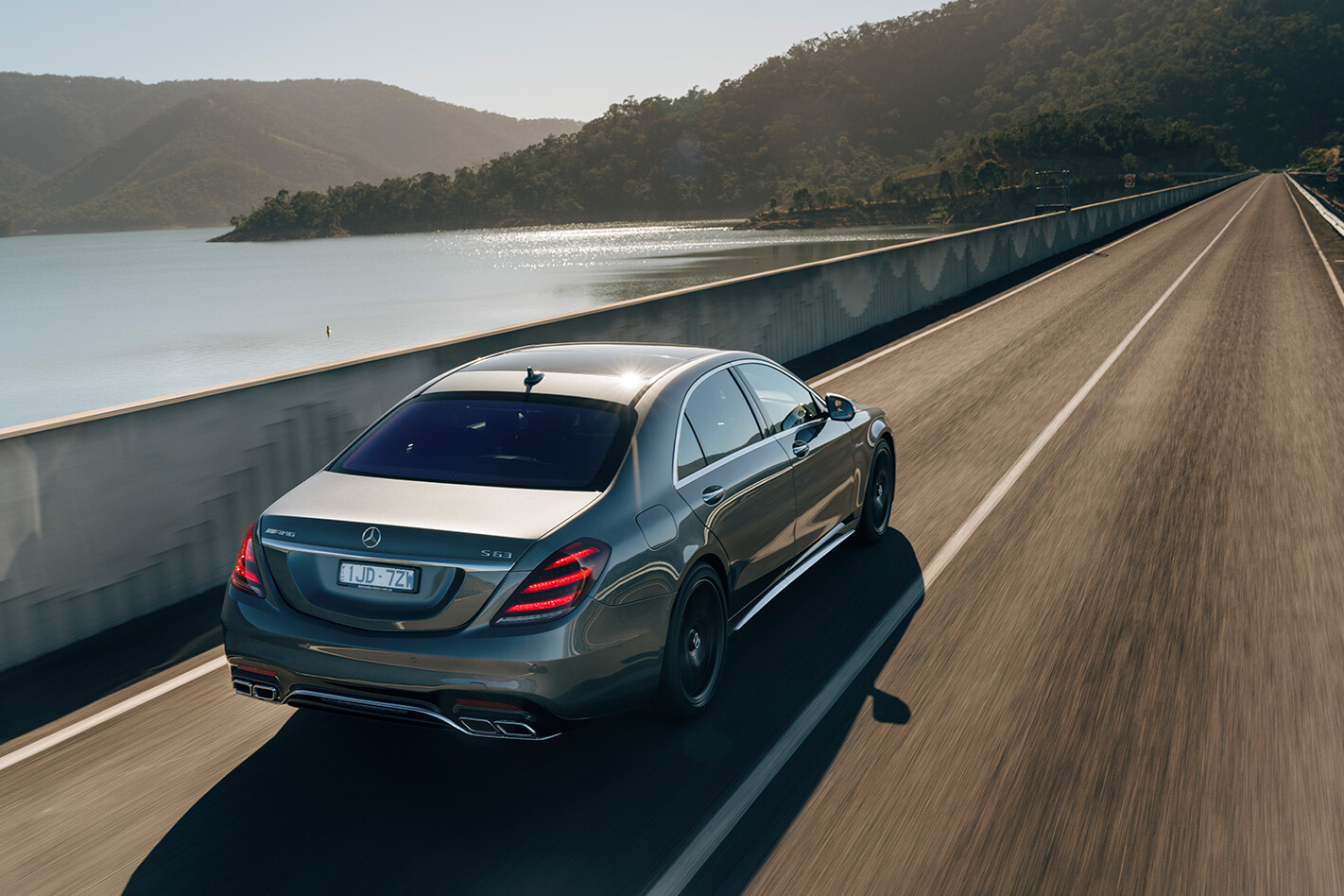 Alternately, the automatic setting is almost clairvoyant in its intuitiveness. The clever gearbox programme holds a gear just as my hand was hovering to contradict an unwelcome upshift that never happened. It also picks the correct moment to slip into the taller gears and is quite happy to rapidly downshift through multiple ratios when braking hard.

It is hard to believe the agility AMG’s engineers have extracted from such a large and imposing car, and there is something hugely satisfying about watching an executive limousine cover distance so quickly, but its adept handling, road holding and muscle still don’t clear up the comfort-versus-dynamics paradox.

For the driving enthusiast, the S63 is certainly fast and a whole heap of fun but I’m certain a shorter wheelbase version would be lighter, lither and more enjoyable in the hands of a petrolhead, so why is it exclusively available with a body that only benefits the people in the second row?

There is an intrinsic appeal to a car that is as large and imposing as the S63 L but which can pick up its feet and perform in a manner some sportscars could only dream of. I get that. It’s the luxury of being able to go very fast if you want to and it’s the customers that appreciate restrained excess that will buy this car. 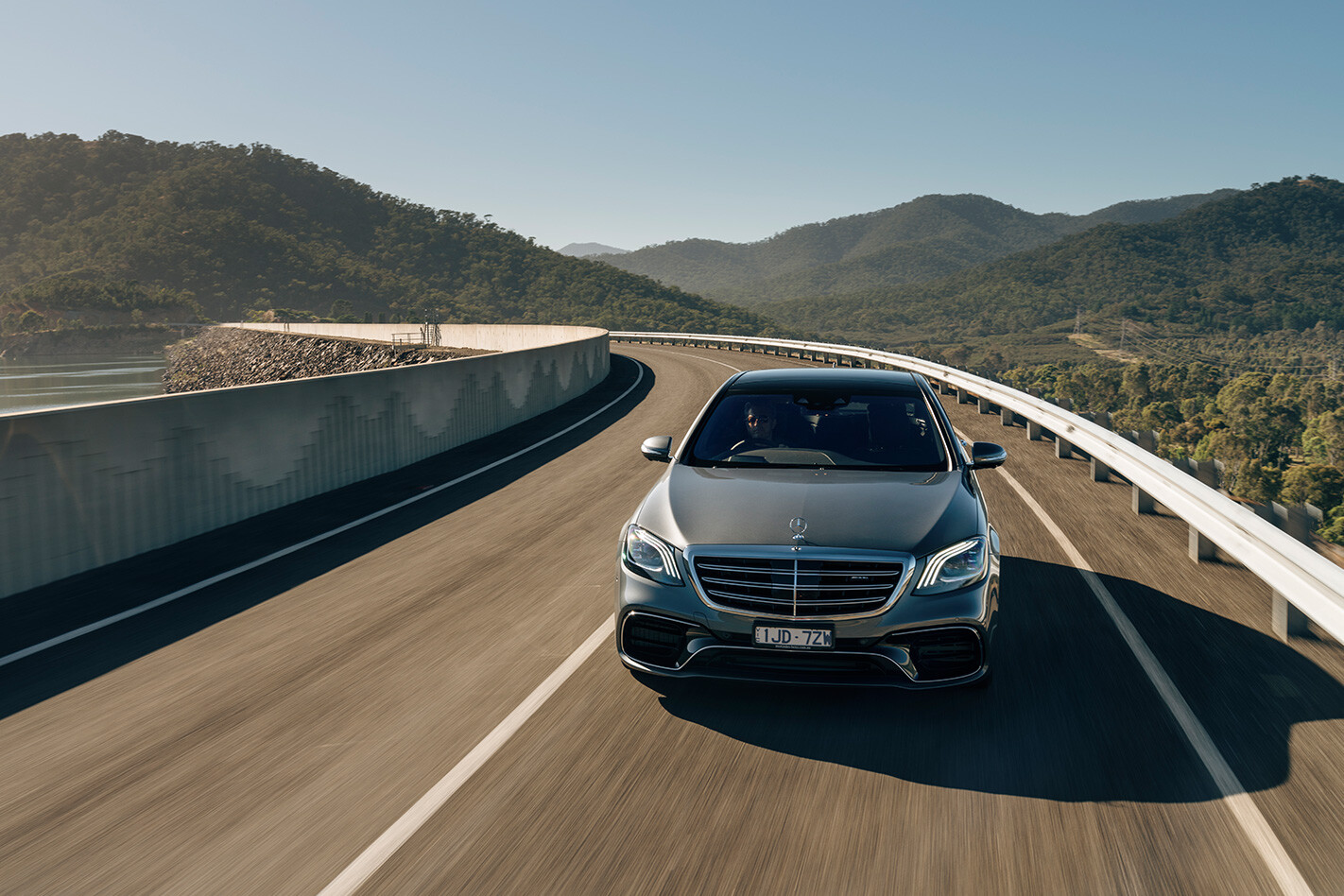 Or perhaps you have a lot of enemies and like having the option to leave somewhere in a hurry without compromising a silky limousine ride on the days you are not being hunted. For those circumstances the S63 L might be the perfect car for you.

If not, jump into the excellent S350d and order a C63 with the cash you save for the days you want to sing the AMG tune and destroy some rubber.