The mid-life update to the Mercedes flagship sedan that brings a host of new technology to enhance driver safety and comfort. New engines include a 3.0-litre straight-six turbo diesel and 4.0-litre bi-turbo V8 that brings the return of the 560 badge.

Audi and BMW have shown their hands with the new A8 and 7 Series, but Mercedes-Benz has shuffled its cards in an effort ensure its S-Class remains the benchmark luxury sedan. Wheels sampled the powerful S400DL long-wheelbase diesel at its international launch in Switzerland so we focused on how the new S506L V8 faired alongside it at the model’s Australian launch. It’s easy to see why the S-Class attracts so much loyalty from its well-heeled clientele with each upgrade providing enticing enhancements for customers which keeps the dealers busy with trade-ins. This relatively mild update brings a facelift, new engines, 6500 new components and enough aesthetic, performance and technological changes to take into yet another level in terms of driver and passenger safety and comfort. The S560 badge has returned to the Mercedes-Benz S-Class for the first time since it appeared on the boot-lid of the second-generation W126 S-Class during the late 1980s.

While the original 560SE drew its name from the big 5.5-litre atmo V8, its latest incarnation is a bi-turbo 4.0-litre V8, but as recent Benz nomenclature has shown, the badge numbers have evolved beyond displacement to represent the hierarchy of the range.

In the newly updated S-Class, the S560 is the most powerful and well-equipped variant without an AMG or Maybach badge and, like the big-selling model introduced in 1986, is offered as standard and long-wheelbase versions. With the S400DL already covered in Switzerland, I chose to concentrate in the range-topping S560L at the local launch in Victoria’s Yarra Valley, swapping Swiss mountain air for a 37-degree Aussie scorcher. 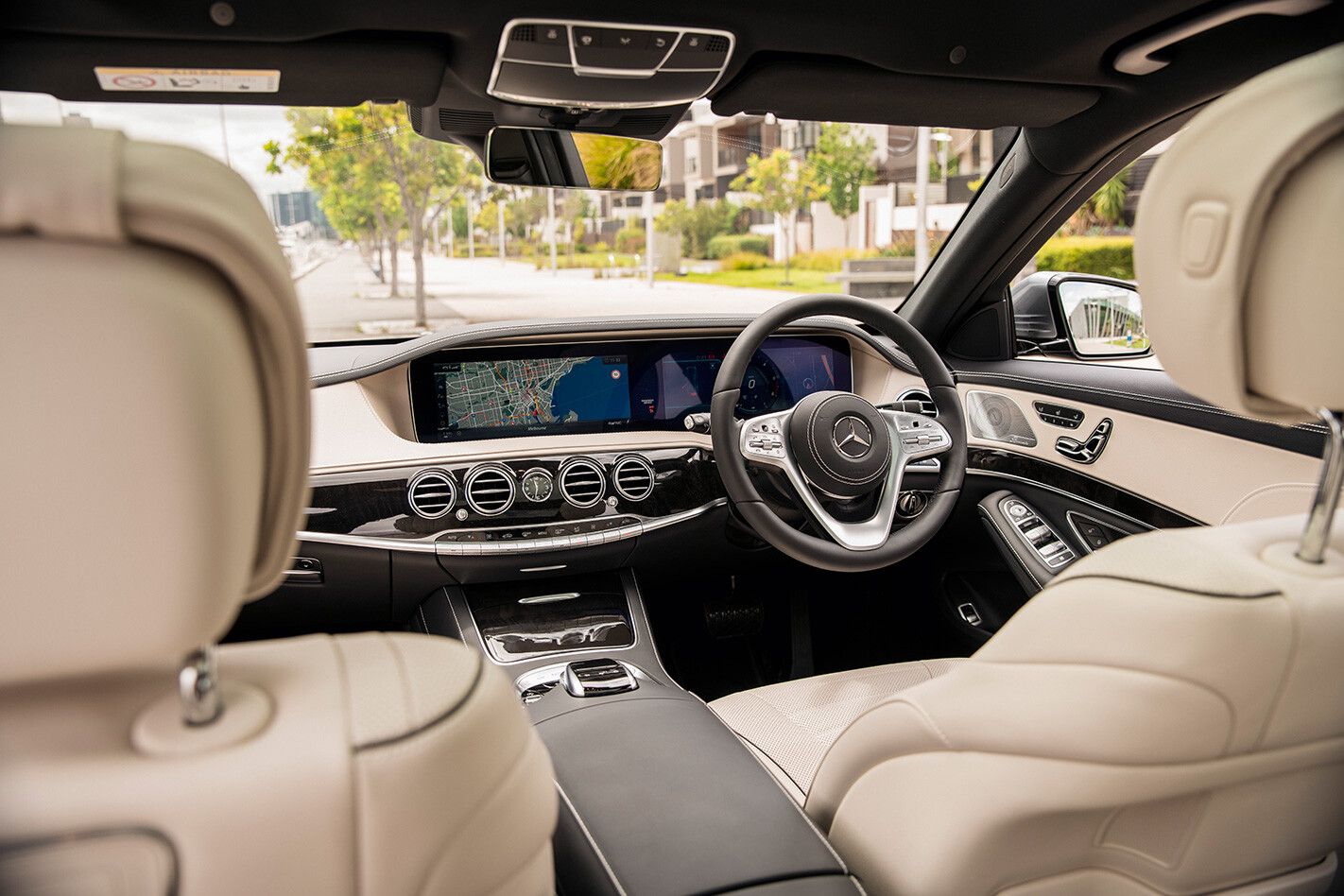 According to Mercedes, it’s capable of 0-100km in just 4.7 seconds, which is remarkable considering its two-tonne heft. Throttle response is instant, either off the line or when overtaking, yet, apart from the speedo on the head-up display ticking over like a poker machine, the acceleration is deceptive because of how composed and quiet the car remains.

It’s only when you jump into one of the lesser-powered models, such as the S350d, which experiences the kind of inertia you’d expect from land yacht, that you appreciate just how effective the extra power and torque is.

The nine-speed torque converter auto generally keeps pace with throttle and brake commands, though the paddle shifters came in handy for quicker downshifting through bends. Power is sent to the rear wheels for all Australian models, with the 4Matic all-wheel-drive traction limited to left-hand-drive versions.

Continuously adapting air suspension provides an exceptionally smooth ride even on the 20-inch rims wrapped with 245/40 and 275/35 rubber at the front and rear ends respectively. The dampers adjust to most conditions for the Comfort drive mode to cover most bases, but Sport mode came in handy on the Yarra Valley’s twisting roads to stiffen things up a little, and reduce that floating sensation without compromising ride comfort. Sport mode also tightens the steering for more direct cornering but doesn’t do much to reduce body roll, which is quite pronounced on tighter bends.

Published fuel economy is a relatively frugal 8.5L/100km though I averaged a still-respectable 10.3 with a mix of freeway, and enthusiastic country driving.

The S Class update brings a relatively mild facelift, including a revised grille, front bumper, and headlights, each containing 84 individually controllable LEDs that can project the brightest legal high-beam intensity up to 650 metres ahead. As well as the new engines there are around 6500 new components, says Merc, and even more technology to boost semi-autonomous driving and comfort.

What’s incredible is how all the accompanying gadgetry is designed to caress your senses, including even your sense of smell, in a way that actually relaxes rather than distracts. 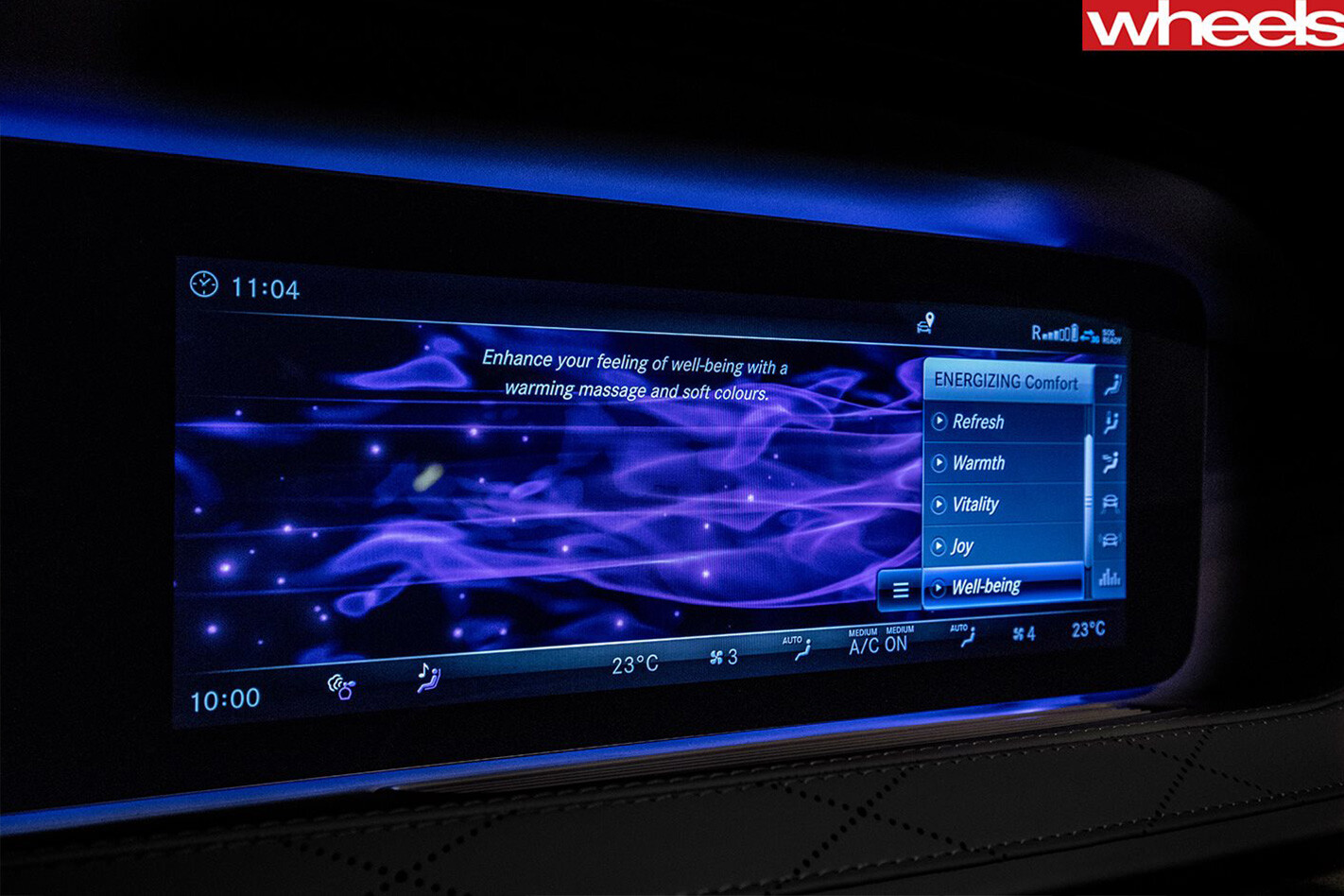 Apart from active safety features that take some of the work away from the driver, controls are mostly intuitively placed, with even the adaptive cruise control and speed limiter buttons making their way to the steering wheel fascia instead of the hidden stalk that relied on muscle memory to operate. While it may upset the purists, it’s a sensible move, hopefully the gear shift stalk will be next to go.

But, while it continues to add new semi-autonomous functions, Mercedes believes the best way to avoid an accident is to ensure the driver is relaxed but alert. Enter the S Class’s latest party trick; Energizing comfort control, which uses the rhythm from a music library to create a series of settings that will operate some of the car’s interior functions to suit the occupants’ mood.

Standard in the S560 and AMG S 63 and a $973 feature in the other models, it has five modes, Refresh, Warmth, Vitality, Joy and Comfort modes that, when selected, display unique graphics on the 12.3-inch colour display matched with the ambient lighting.

It even adjusts seat settings and climate control accordingly and plays appropriate music, based on the beats per minute, to either invigorate or relax. It also has a choice of three 10-minute ‘training programs’ which feature a soothing voice that advises on body movements, breathing techniques and thoughts to keep the driver stimulated and alert.

Mercedes calls it “Wellness while driving” which sounds a little naff, but on a 37 degree day the Refresh mode, which simulates a fresh seaside breeze, actually managed to make such a gracefully performing and comfortable car even more pleasant. 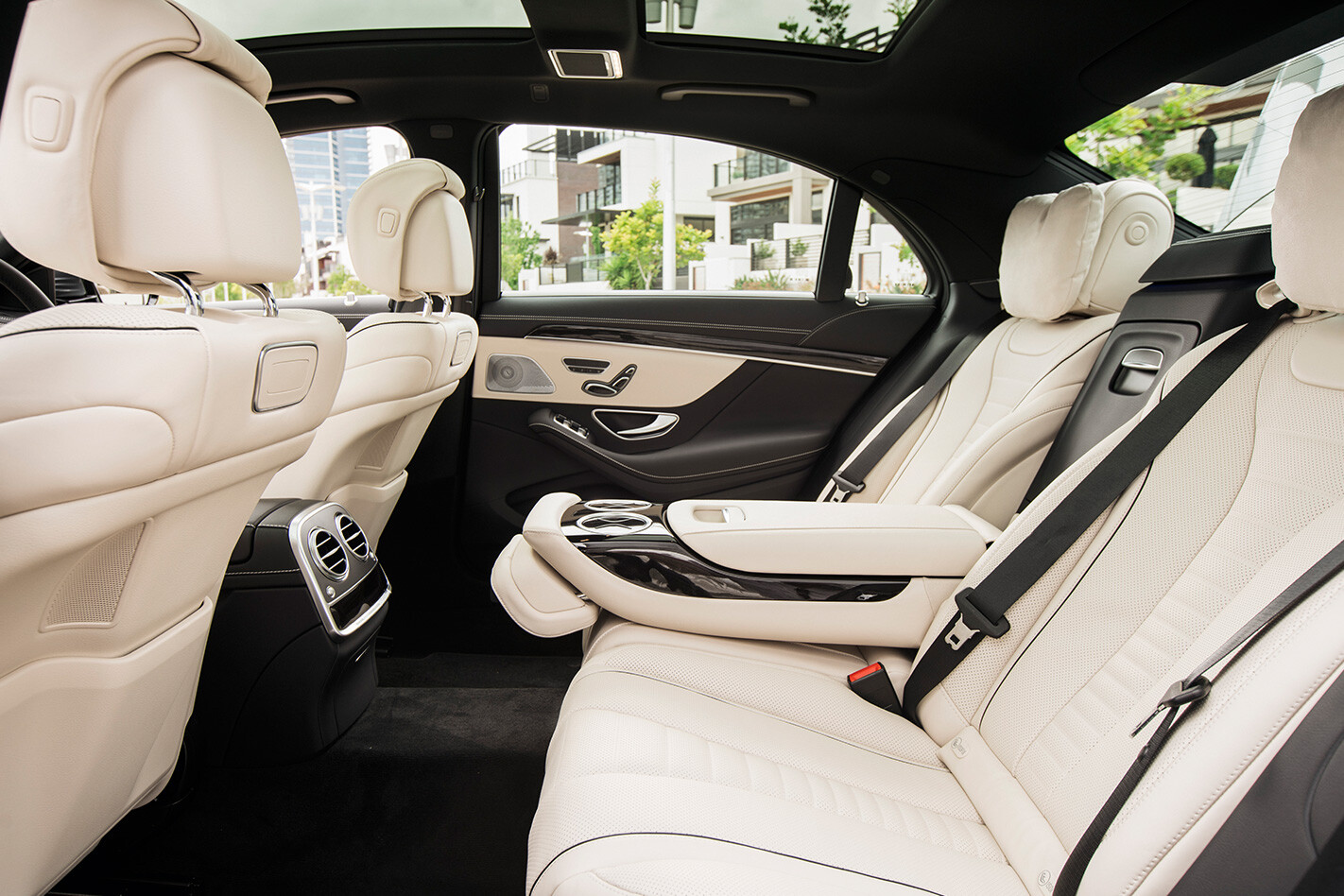