As the most powerful 911 ever built, the new GT2 RS is so fast it can outrun the screams of its passengers

A wild ride from Stuttgart over the Swabian Alb to Munich suggests that this mean machine is about to turn the high-performance sports car world upside down. After what seems like years of speculation, Stuttgart’s most radical 911 is ready to hunt down all comers. The warning bell has well and truly sounded. Game on. 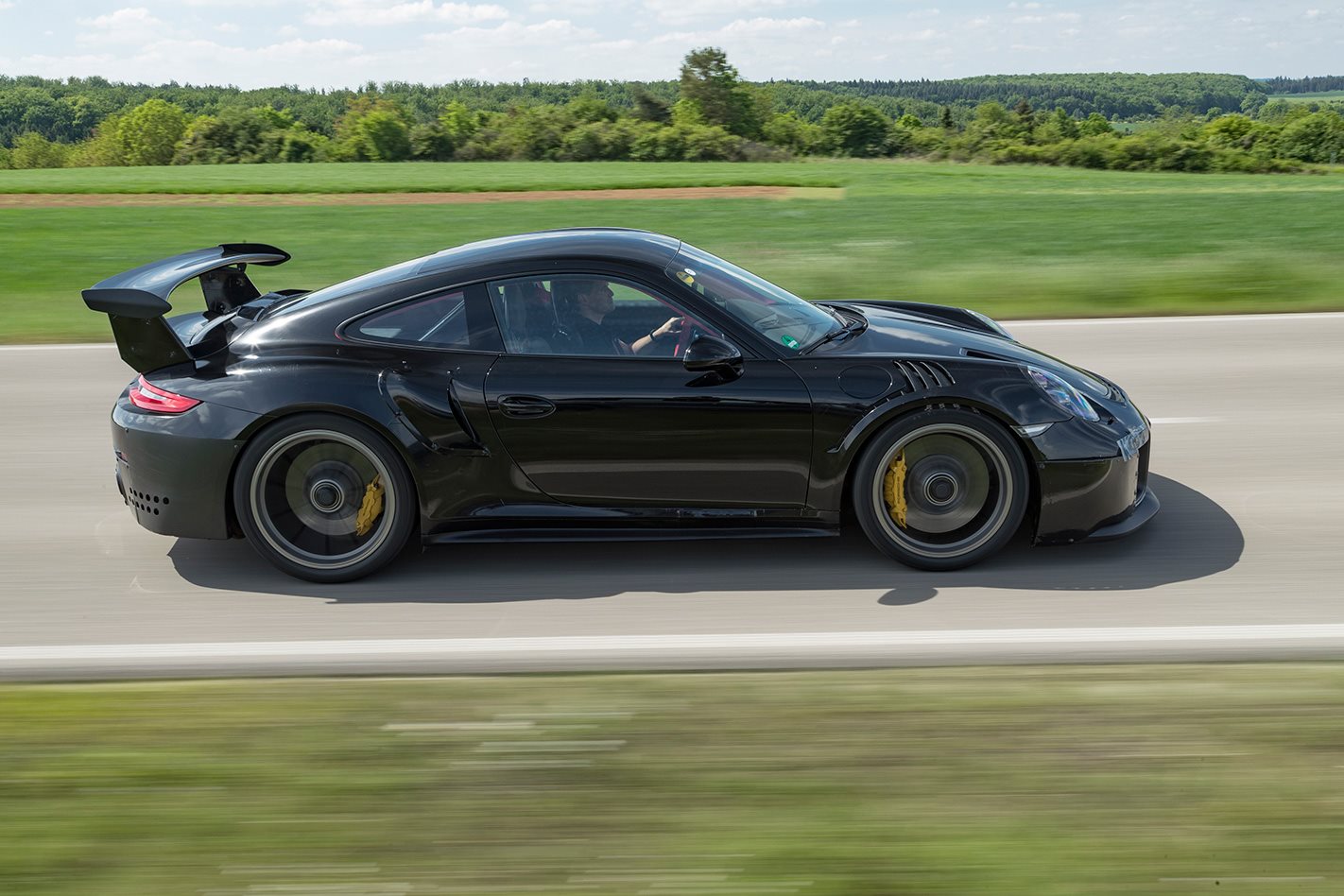 Interestingly, there was a time when Porsche fitted two grab handles to every 911. Lucky future passengers take note, because those days are long gone. What keeps the victims – ahem – willing participants firmly locked into position in the latest GT2 RS are red safety belts, bucket seats and a strong trust in modern safety.

Of course, then there are those times when you have the driving skills of a professional behind the wheel, one such as Uwe Braun, head of the GT car development department and certified lead-foot. Without hesitation, the veteran Porsche engineer reaches for the ignition key, smiles and pulls the PDK lever into its sportiest mode. 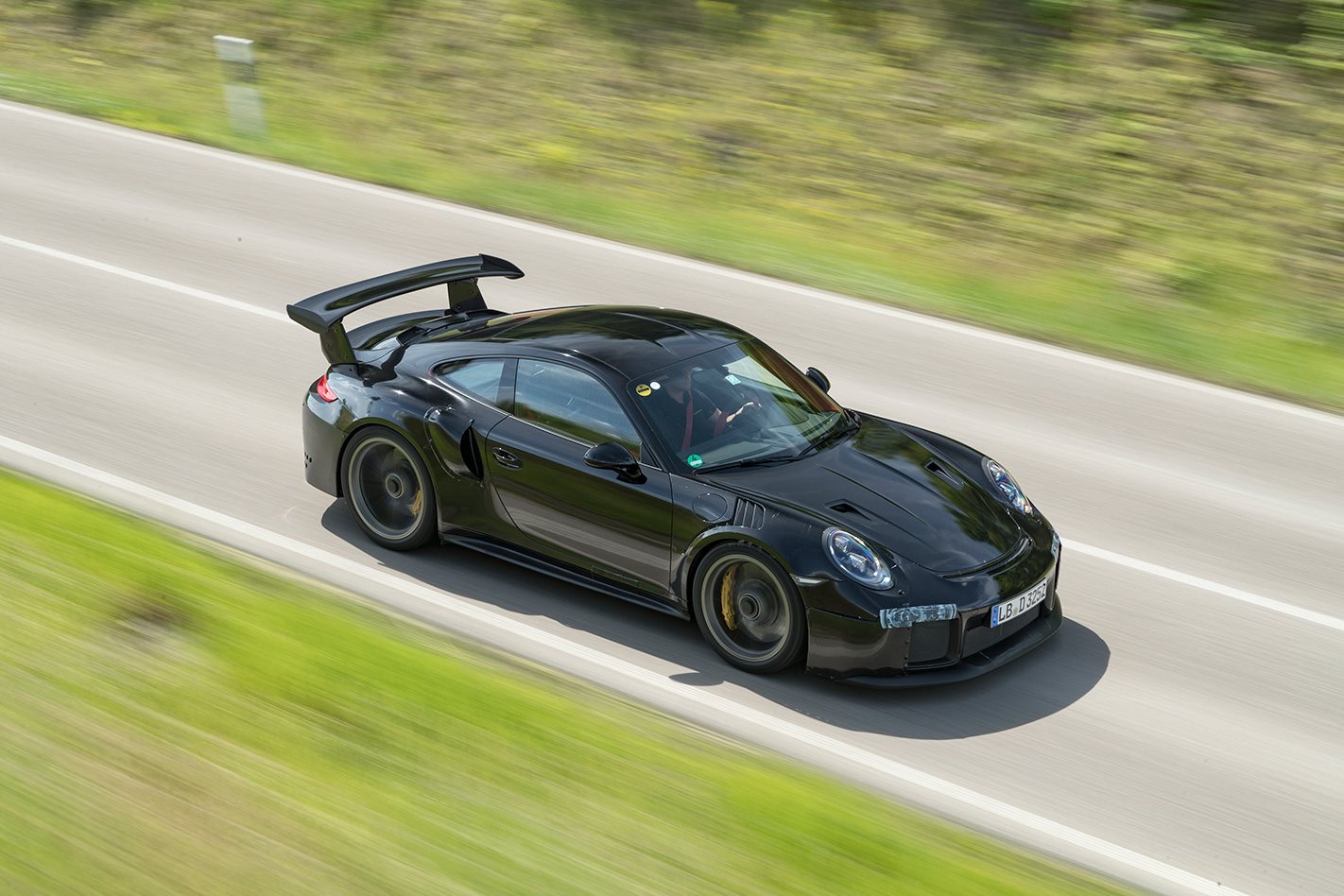 If you think the new 368kW/460Nm 991.2 GT3 peels tarmac like nothing else, you’re in for the shock of your life as soon as 515kW/750Nm grabs you by the bowels. Spooling turbine-esque energy with aggressive vigour, this 3.8-litre twin-turbo flat-six, a modified version of the engine in the 911 Turbo S, builds up enough lateral force to unseat false teeth, summons enough brake pressure to paste your wig to the windscreen and gathers facelift-inducing forward shove.

Yet, despite the related RS nomenclature, the GT2 and the GT3 are worlds apart. It’s not merely a matter of turbocharged versus naturally aspirated, XXL versus XL wing-work or PDK versus manual gearbox. What makes the biggest difference is the 147 extra kilowatts and some 290Nm of torque.

As a result, the latest batmobile on steroids can accelerate to 100km/h in a claimed 2.8 seconds, hit 200km/h in less than nine seconds and reach a 340km/h top speed. 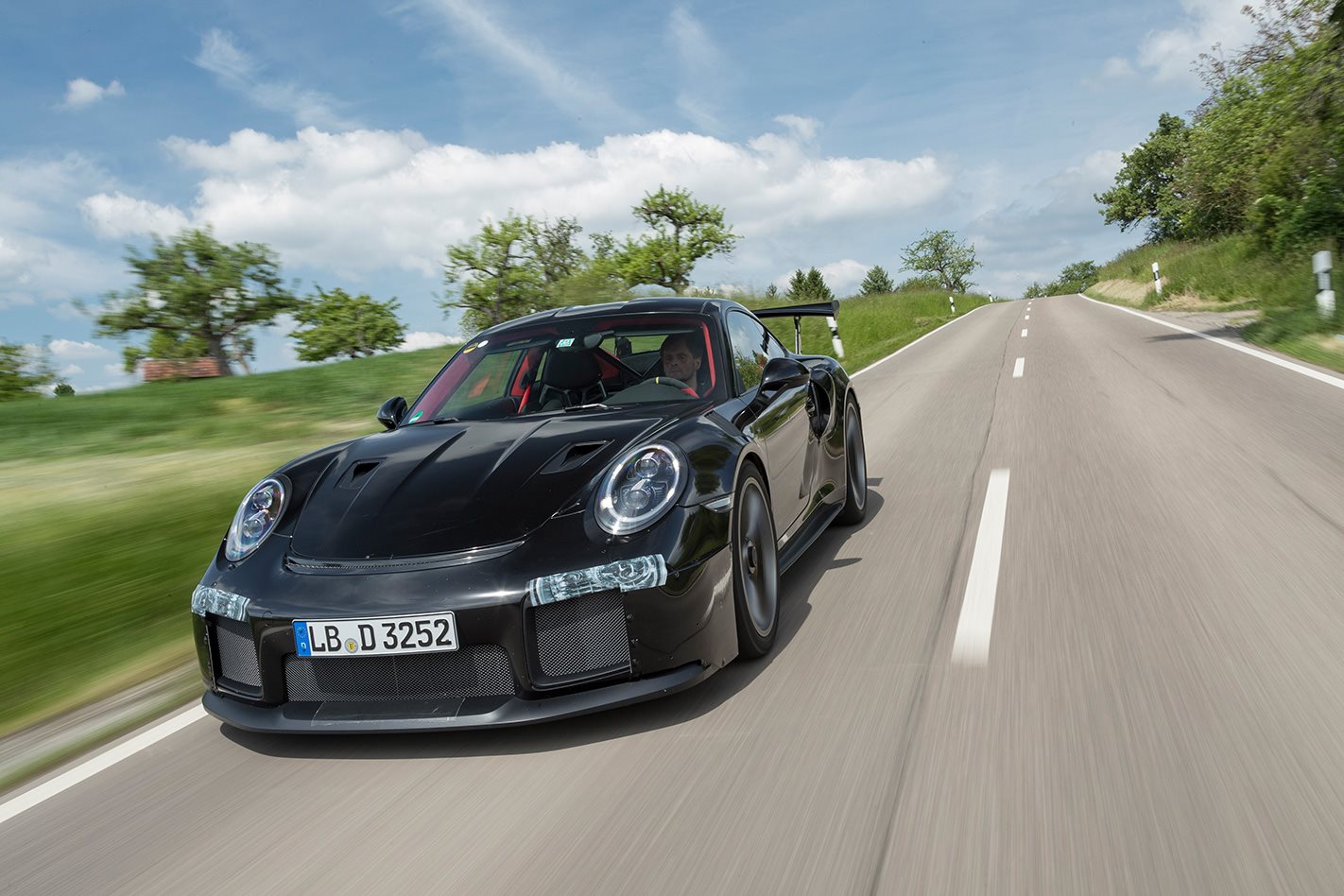 While the 4.0-litre GT3 engine is a dedicated player of crescendos, the boosted 3.8-litre unit in the back of the GT2 sounds more like Wagner-meets-techno. It’s wicked, and the evil, rumbling 24-valver is one loud, acoustic menace. And that’s with the exhaust in the neighbour-friendly setting. Open the flaps and the volume turns up to 11.

Wafting through villages at 2000rpm it is so intensely resonant it almost hurts. But as soon as the opportunity arises to uncage the beast behind our backs, the twin-turbo flat six turns up the volume and climaxes with a decibel tornado. Give it stick and the two catalytic converters, which lurk behind the four oversize tailpipes, start glowing red.

The RS acronym stands for Racing Sport, which is the domain of Andreas Preuninger and his team who have done a good job of refining the spring and damper rates to almost mirror the Carrera Cup car. 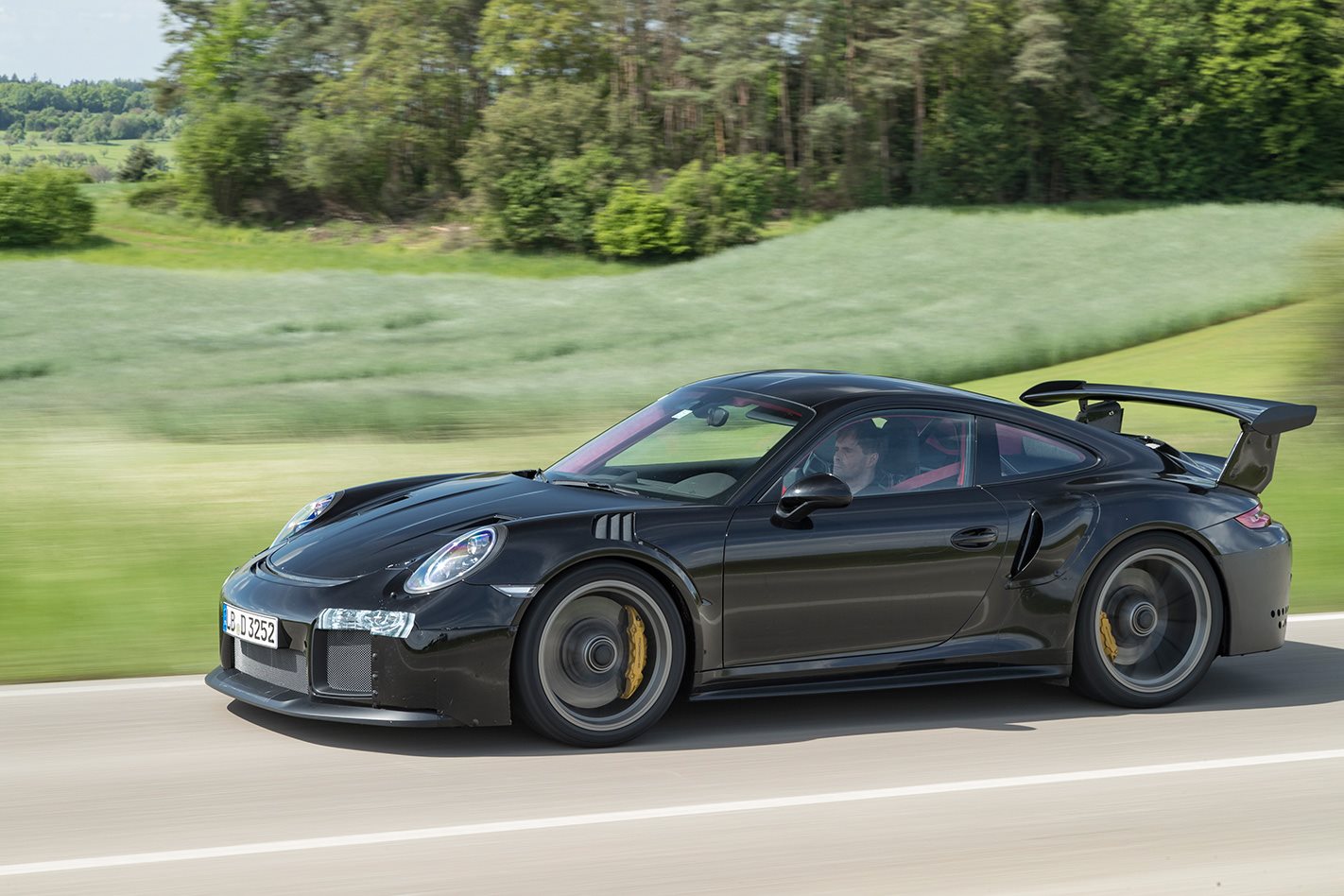 Also, the suspension and drivetrain mounts have been stiffened, high-performance Michelin or Dunlop rubber is available, the cooling and ventilation ducts have been supersized and there are myriad aero upgrades. It is a work of automotive art.

Even though a strict carbon-fibre diet helps to keep the kerb weight to 1470kg, for a price premium you can have the 918-inspired Weissach pack, which sheds another 30kg. The pack includes composite sway bars, a rollcage made of titanium, magnesium wheels and a thinner roof skin. For the hardcore among us, you can also opt to delete air-conditioning, sat-nav and radio.

On the other hand, those looking for a comfier experience can pay extra for the electronically adjustable comfort seats. Uwe Braun is a pragmatic person. In the beginning he’s happy to talk tech like that mixed in with various anecdotes. However, talk is cheap and after the initial impressions are digested, it’s time to set off. 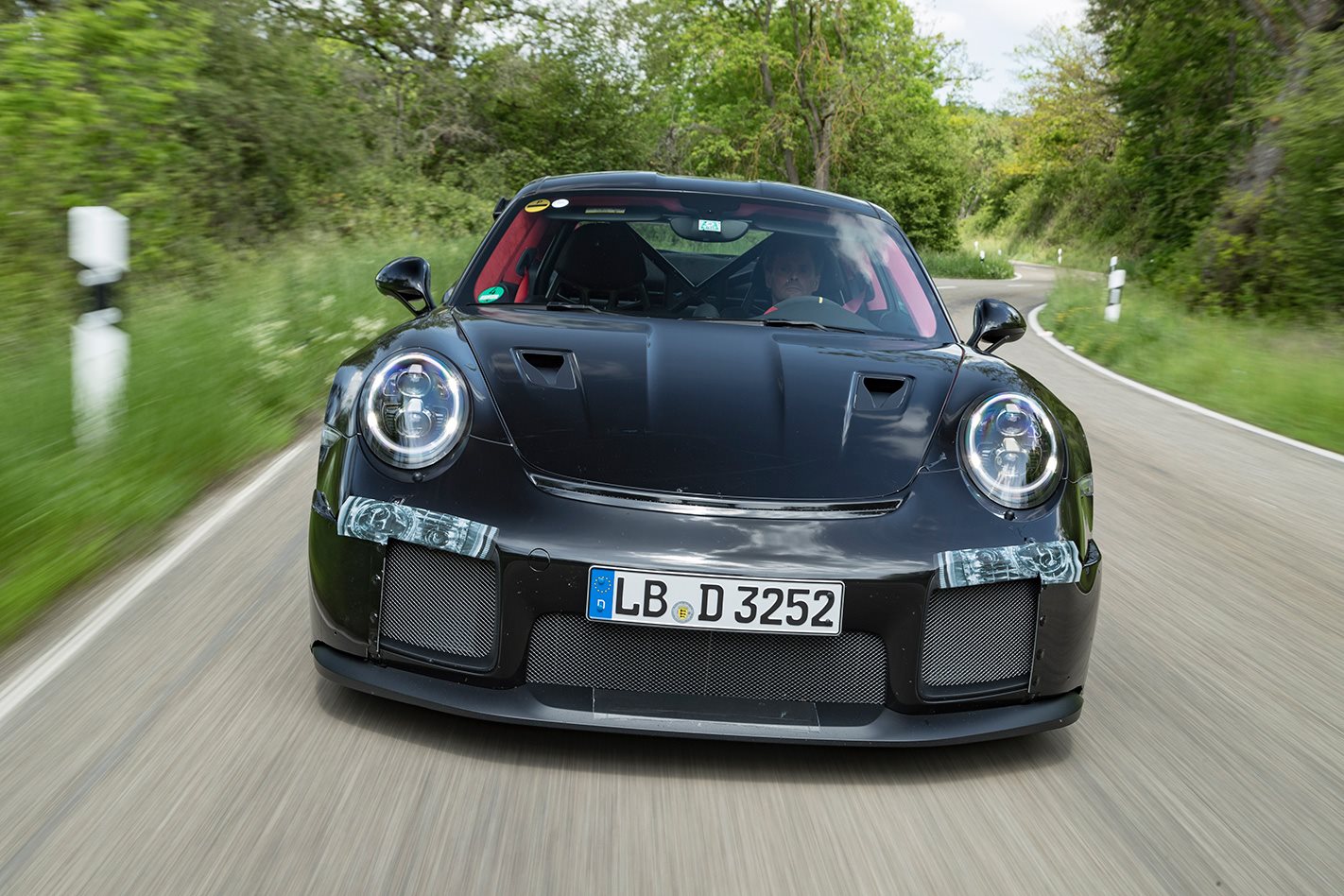 In that moment, his subdued demeanour quickly transforms as the red mist descends. A couple of clicks on the downshift paddle is all it takes for fangs to be bared. Full throttle in second gear and the rev counter strides to 7000rpm, 200rpm shy of the limiter. Repeat the process in third and it’s met with an almighty kick in the butt followed by unrelenting forward thrust.

Ramping up into fourth gear the devastating GT2 RS runs out of road at an alarming rate before my pilot jumps on the brake pedal – hard. The forceful application means the digital speedo once again returns to an officer-friendly 100km/h.

BB-PW 7743, the steed we are piloting, is one of 18 prototypes. It has only 6139km on the clock, but if the condition of the bodywork is anything to go by, this GT2 RS has already lived a hard life. 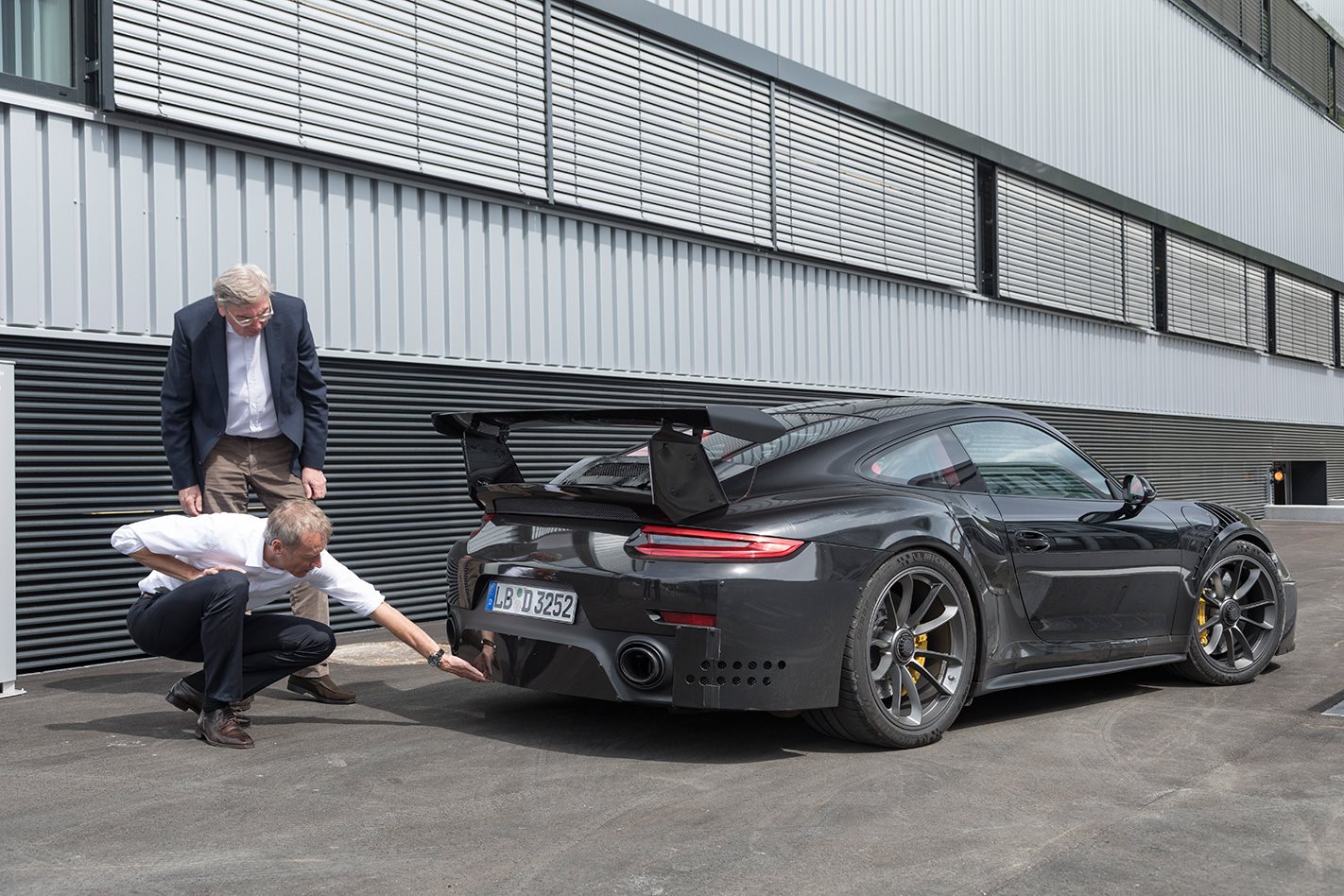 On a three-lane stretch of autobahn, we saw speeds that would have you saying goodbye to your licence for a very long time here in Australia. It felt like the final phase prior to lift-off, but maximum downforce has actually increased to 350kg, of which two thirds rests on the wide rubber at the rear.

On the road winding through the roller-coaster landscape of the Swabian Alb, the wiry wizard from Weissach once again puts the hammer down hard. With the GT2 RS, he manages to fuse staggering acts of agility with stunning, wide-eyed moments of hard acceleration. After all, this 911 is, in essence, an old-school, high-octane tearaway which commands the road with elegance and reassuring exactness. 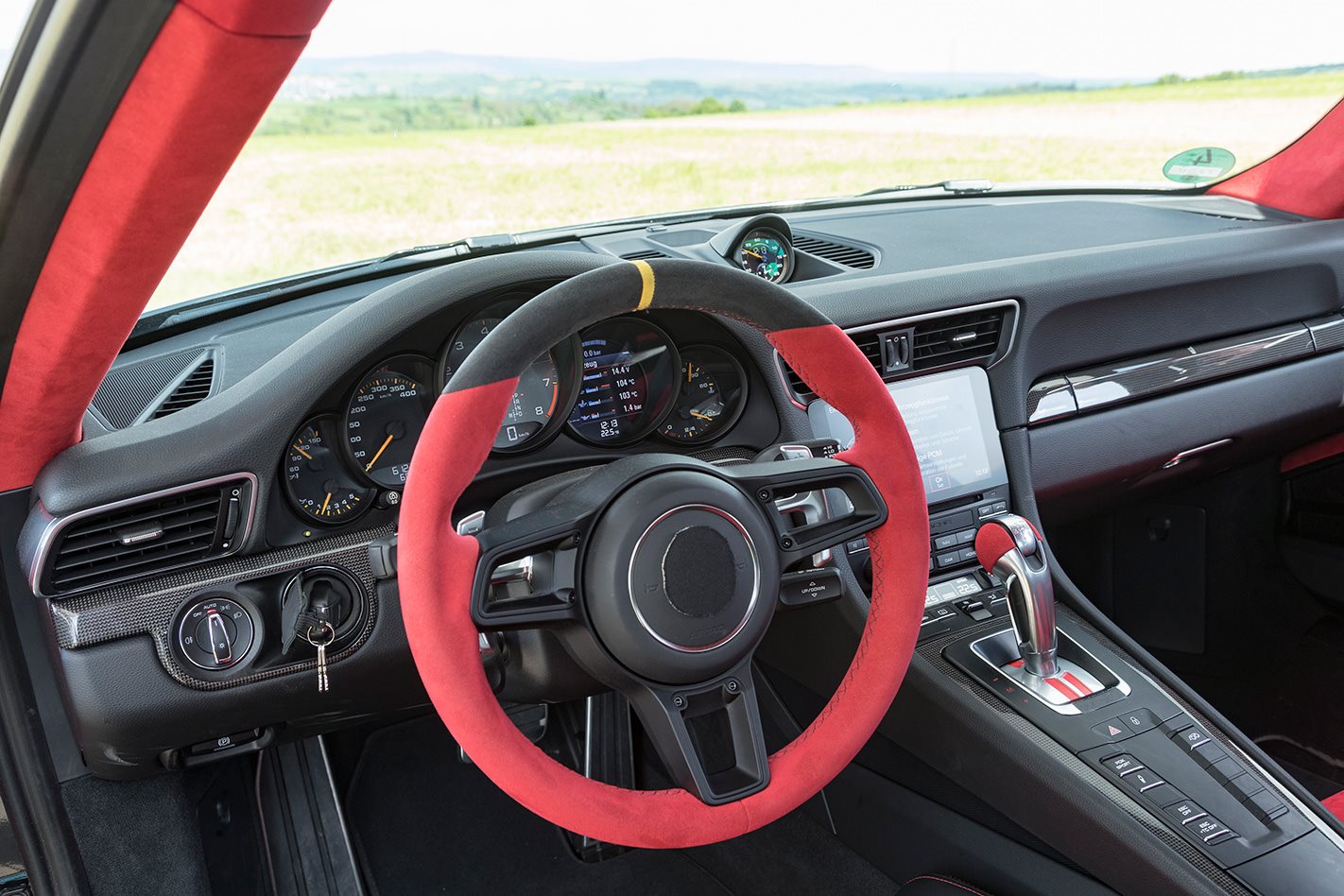 This Porsche can do a lot of things wannabe rivals fail to match. But what really separates the GT2 RS from the flock is the way it delivers these goods. Take the steering, which reads the road with detailed accuracy. In this car the input truly equals the output – irrespective of velocity and terrain, it’s all relayed back to the driver.

Entry speeds into corners are mind-boggling with grip exceeding all physical and mental thresholds you thought you knew. And just when you are absolutely certain that the moment has come to pay the price for one’s folly and for the insane 39:61 front-to-rear weight distribution to take control, the rear-wheel steering interacts with a casual stabilising gesture.

Those massive brakes also offer tactile modularity and instant feedback. When Uwe Braun starts pushing his baby to the limit, mind and body come along for the ride. It’s all about trust and faith. 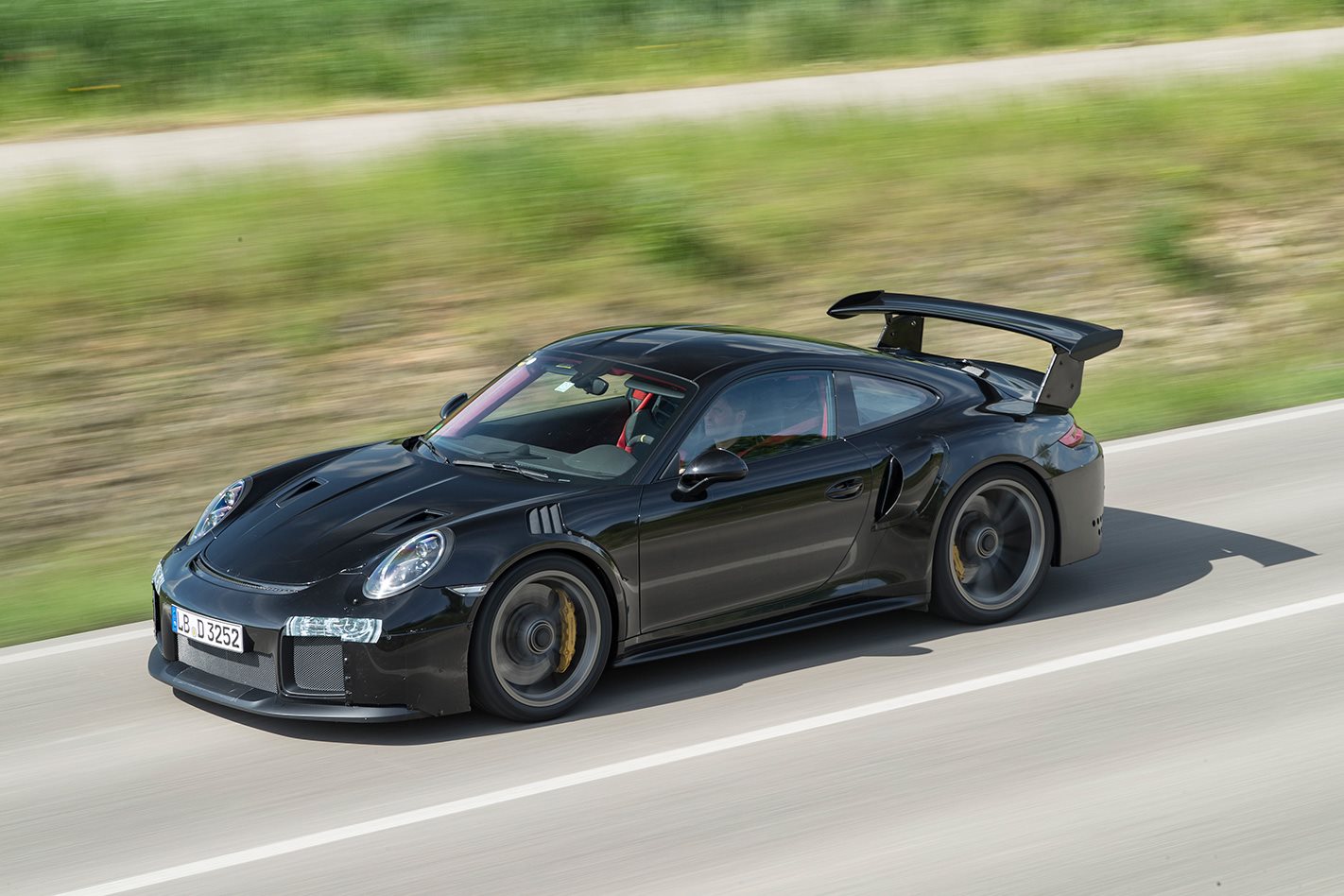 Watching him put the RS through its paces – and feeling the g-forces at play – is mesmerising and strangely calming. After all, the fully variable rear diff lock does help to put the torque down in a progressive fashion. The UHP tyres (265/35 ZR20 and 325/30 ZR21 front to rear) dutifully abide and stick like superglue.

The rear axle, located on uniball joints, actually traces the front axle with uncanny accuracy. The aero kit produces enough downforce to keep the nose riveted to the blacktop, suppress any trace of waywardness and seal the bond between man and machine.

In seventh gear, riding the mighty torque curve, the widebody speed demon shows impressive amounts of poise. It’s all sensory overload and  enough to forgive the jarring low-speed ride quality and the obnoxious tone of voice. 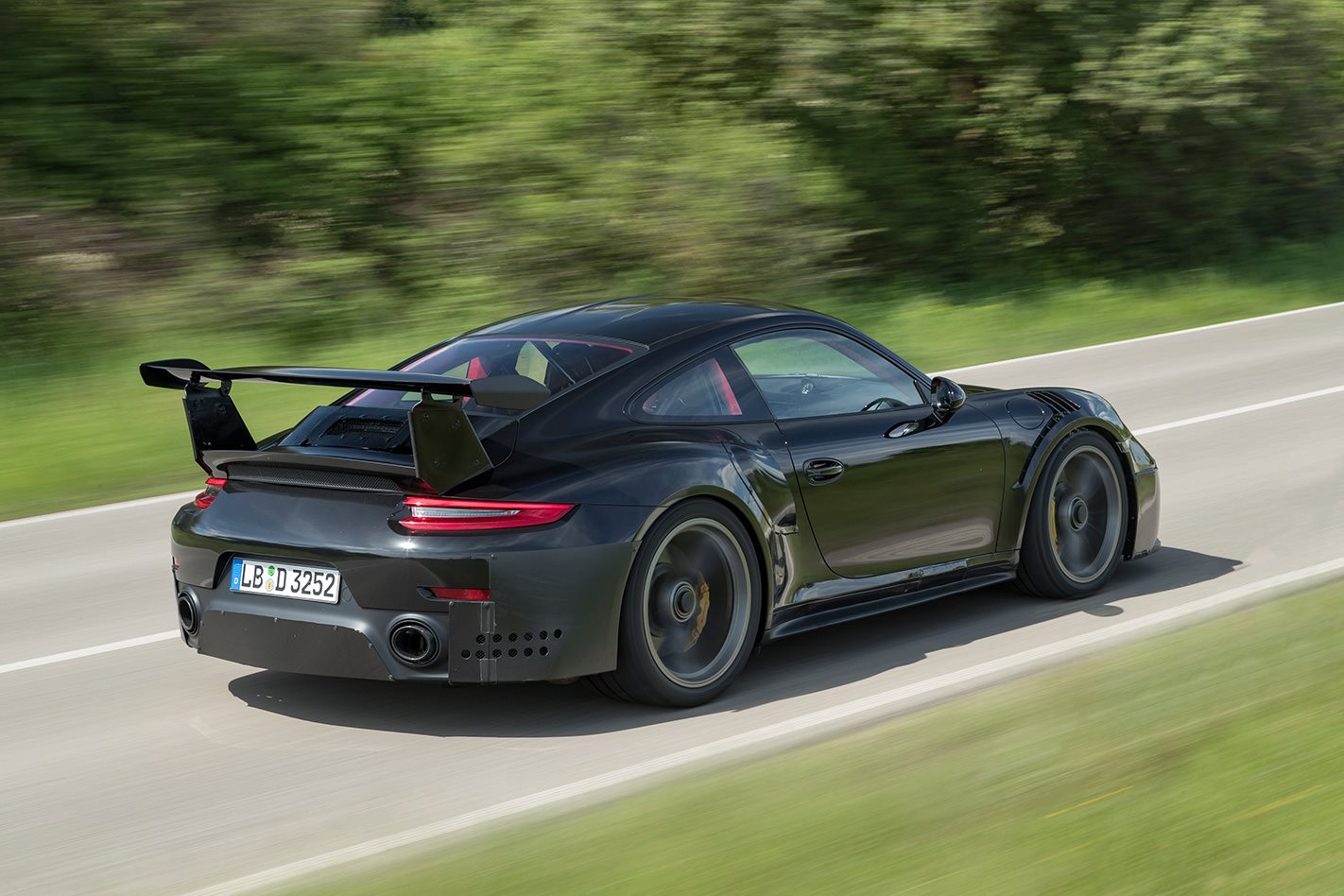 Ultimately, it takes a racetrack to really enjoy the 911 GT2 RS to the full and appreciate what it can do. Yes, you could find a suitable stretch of public road to extract the all-encompassing performance, but with 515kW and 750Nm underfoot, and being sent solely to the rear wheels, any no-holds-barred drive should be reserved for the track.

You also always have to bear in mind that the standard Michelin Pilot Sport Cup 2 tyres – specifically designed for the hyper RS – limit your ambitions. Warmer weather and dry tarmac need only apply.

At all times you have to be aware of what’s at your disposal as the quicker bite and epic pace combine for a more unforgiving nature. But that’s probably how it should be for the angriest 911, which, unsurprisingly, has sold out long before order books opened. 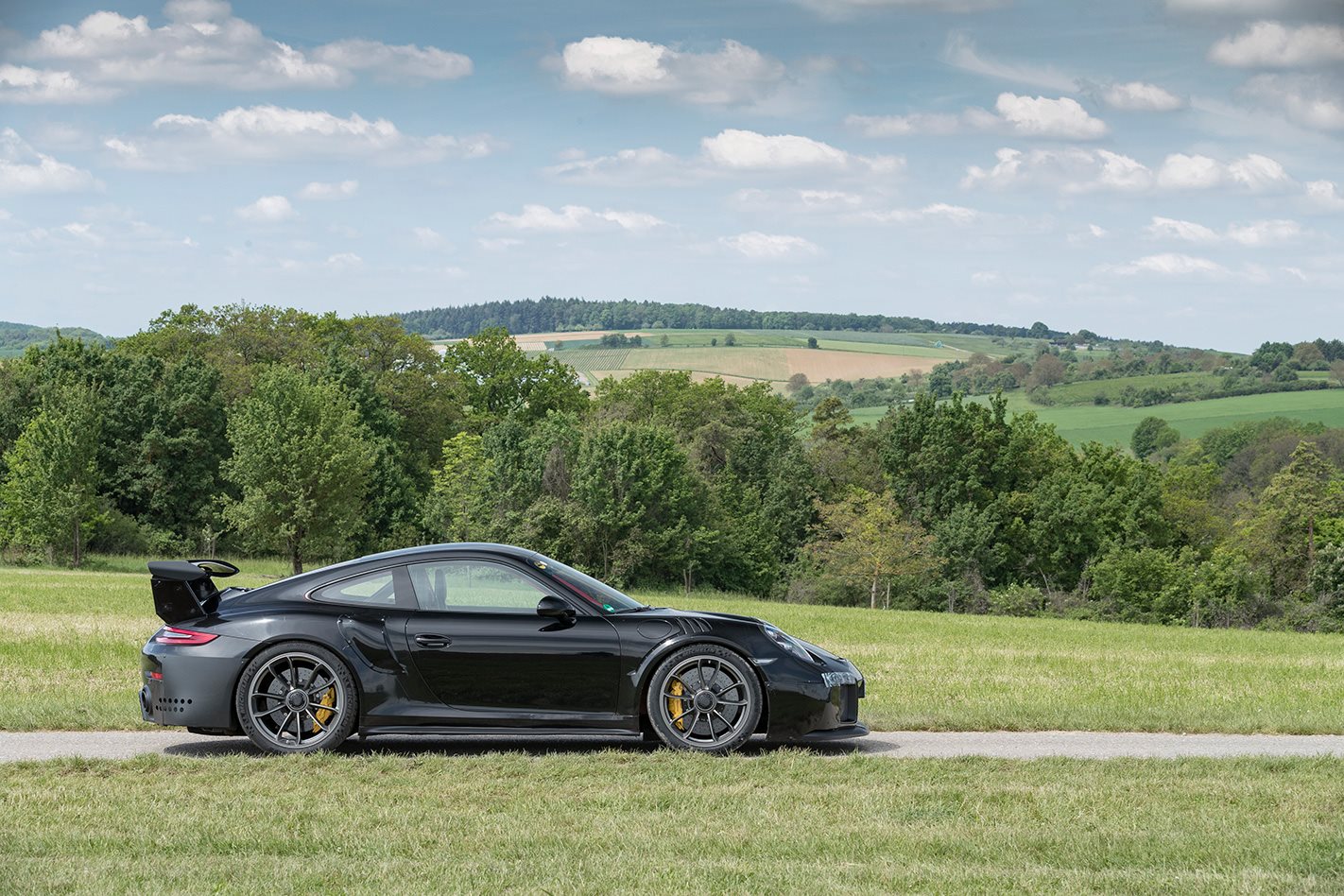 The 991.2 GT3 RS may be almost as challenging and rewarding, but at the end of the day, it’s the extra horses, relentless push and rapid-fire PDK which puts the GT2 RS on a pedestal all of its own. We’ve known about something lurking within the Porsche skunkworks for some time, but now it’s here – albeit only in prototype form for the time being.

However, it’s enough of a taste to know that the next big hitter is the definitive accolade for the turbocharged six-cylinder boxer engine. Porsche has created yet another freak of nature that we’re unsure the world is quite ready for. 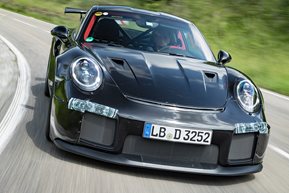