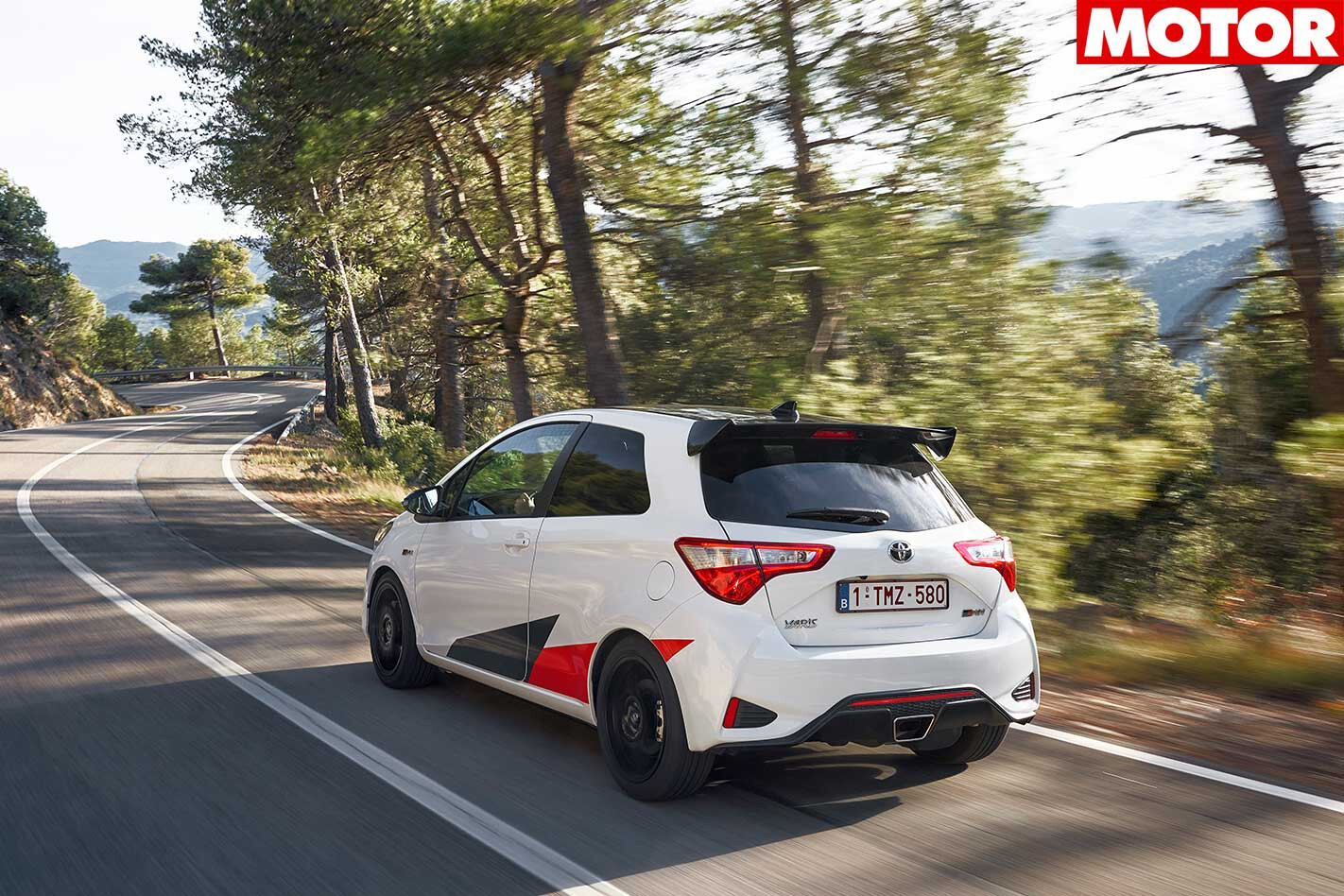 Yes, the Yaris is an odd beginning with only 400 to be built. But sources suggest full-fat GRMN models will continue as limited-series productions. The performance makeover is impressive, although not as thorough as the company might lead you on. Having braced the hatchback’s body-in-white in key places, Gazoo Racing has fitted shorter and stiffer suspension springs and Sachs Performance dampers, as well as a fatter anti-roll bar up front.

Forged 17-inch alloy wheels from BBS save 2kg per corner and are wrapped with 205mm-wide Bridgestone Potenza RE050As and stopped by uprated disc brakes and four-pot front calipers. 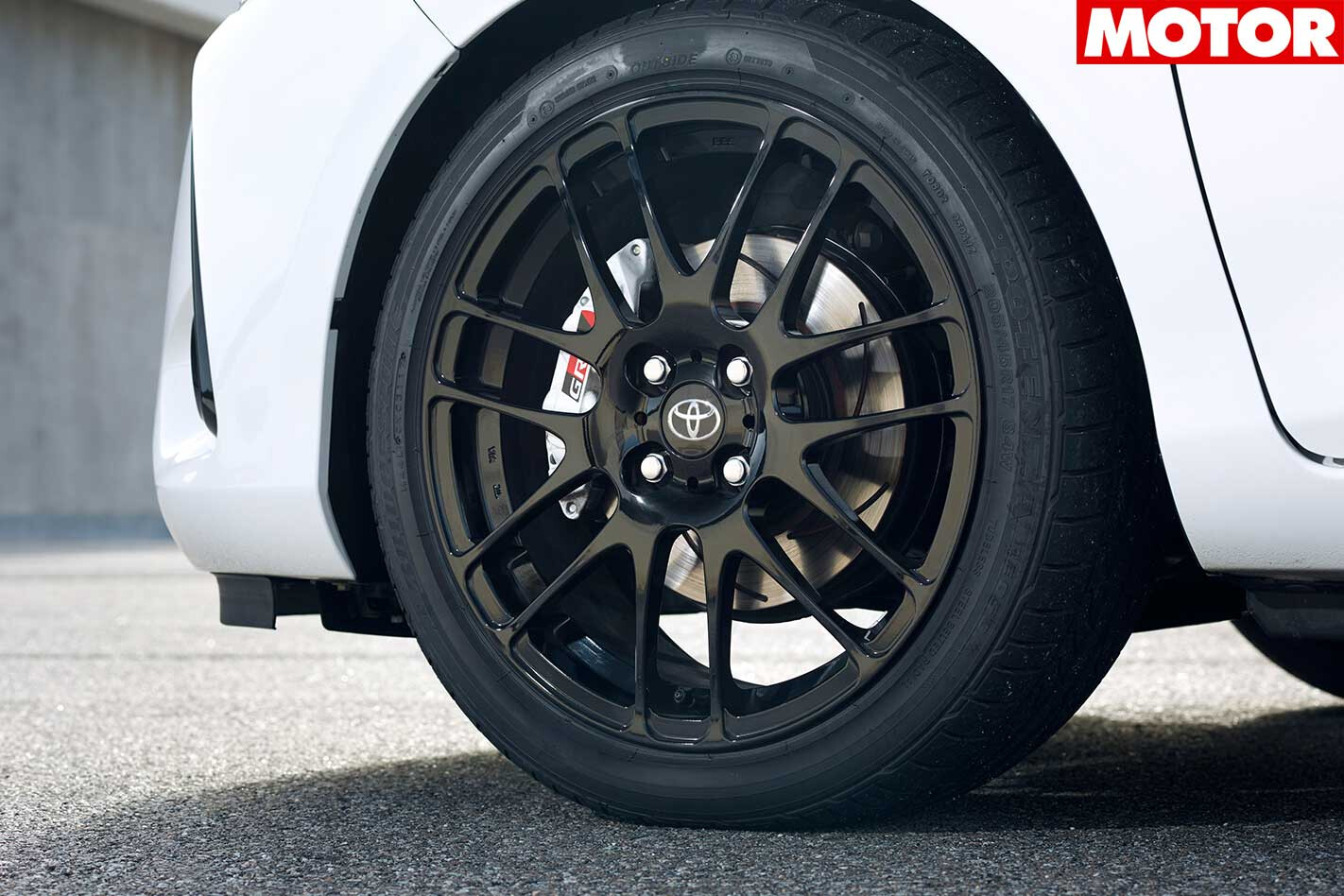 The steering rack has been quickened, too. But there is no widened axle track here, and no lightweight suspension arms or dedicated knuckles of the sort we’re beginning to see on hot hatchbacks at this level.

The engine is a supercharged 1.8-litre petrol four-pot built by Toyota UK and tuned by Lotus. Producing 156kW just shy of 7000rpm and 250Nm, it makes a refreshing change from the smaller-capacity turbos within this niche. And, fitted with a centre-exit exhaust designed for this car, it sounds great when it’s working hard: waspish, brassy, rough-edged. 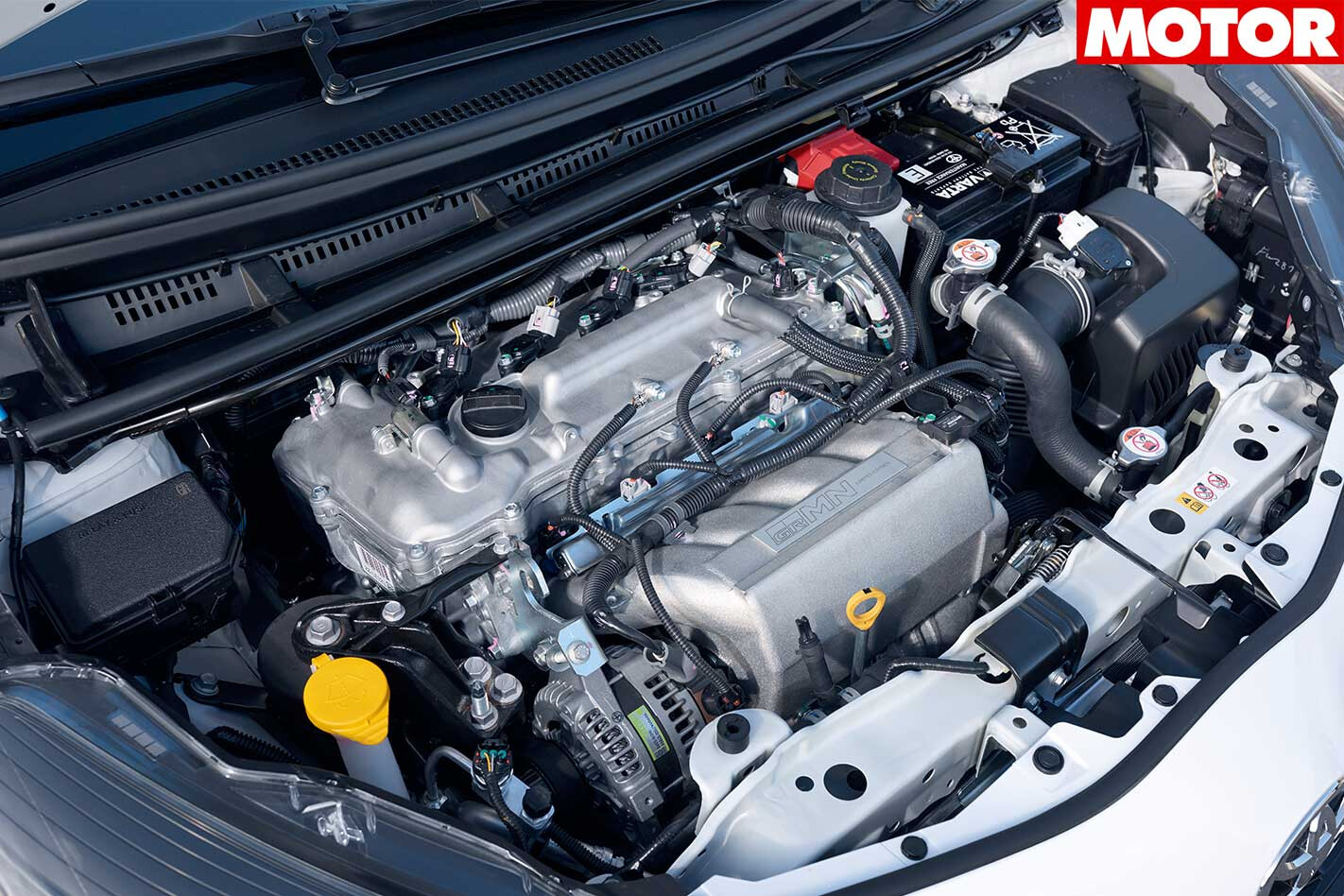 The Yaris GRMN has some excellent ultra-suede sports seats that hold you in place, but it’s a pity you sit high at the controls, close to the pedals, and with a provision for driver leg room that anyone taller than six-foot-two will likely find troubling. But the car also fails to give you quite enough steering column reach adjustment and its pedal layout puts too much fresh air between the brake and accelerator to make for easy heel-and-toeing. In broader terms, plenty might find fault with the car’s perceived cabin quality given the price they’re being asked to pay – the fascia is dark and plain and looks both antiquated and cheap in places – although that’s likely to bother those primarily interested in the driving experience less.

The Yaris GRMN doesn’t have the low-rev torque to bludgeon its way down short straights with the vigour of something more powerful and expensive, but its engine responds very crisply indeed, zips to the 7000rpm redline and makes the accelerator feel like it operates in an entirely analogue and linear fashion – unlike big-boosted turbo rivals. 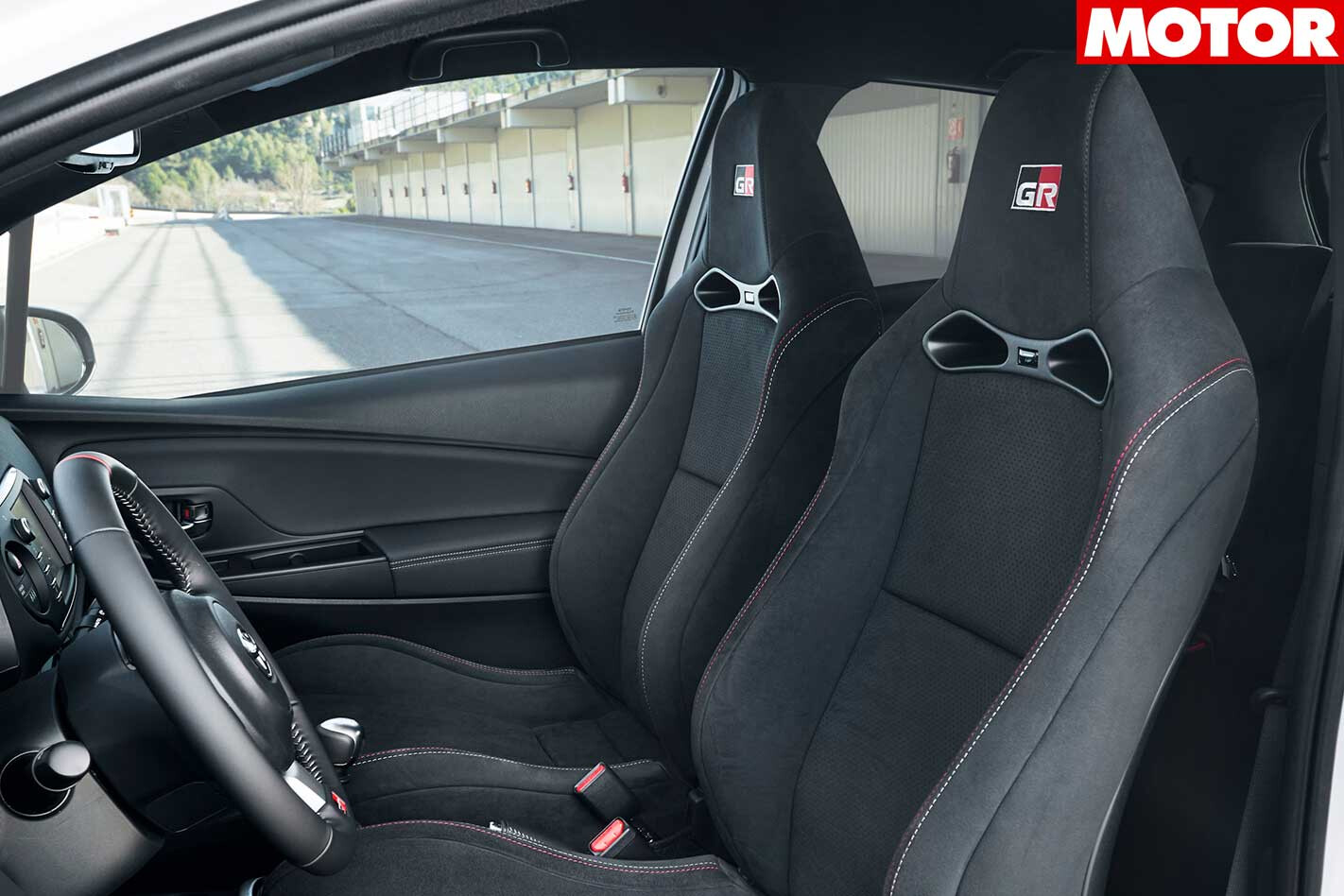 The Yaris makes a decent effort out of a poor start in life for ride and handling. Being unusually tall even by small-hatch standards, the car has a high centre of gravity and doesn’t quite dive with the agile glee of a Ford Fiesta ST.

Instead, it takes a perceptible moment to settle on its outside wheels before changing direction and doesn’t point or rotate underneath you in the same way. But that’s not to suggest the car isn’t an engaging, lively type. If you set about the Yaris’s meaty controls, working hard to shift its mass around during cornering and wringing every available rev out of that engine, it rewards you aplenty. The car has a very simple, likeable, old-school performance vibe (because it has passive dampers and a manual gearbox), makes real engine noise and has but one driving mode.

The Yaris’s body control is very good and its damping superbly tuned, allowing enough short-wave suppleness to keep the body settled over smaller lumps and bumps, but checking it firmly over bigger ones. Steering is feelsome and true although it weights up unhelpfully when you gather the car’s weight over its front axle and can squirm and fight a bit when the Torsen slippy diff is trying to put all 250Nm through the outside front wheel. Also, although handling isn’t as adjustable as the very best hot small hatches, the Yaris’s attitude can be manipulated a little with a mid-corner brake dab.

Whether that amounts to a mini hatch worth paying $46,493 for is in one way irrelevant: the Yaris GRMN won’t come here. 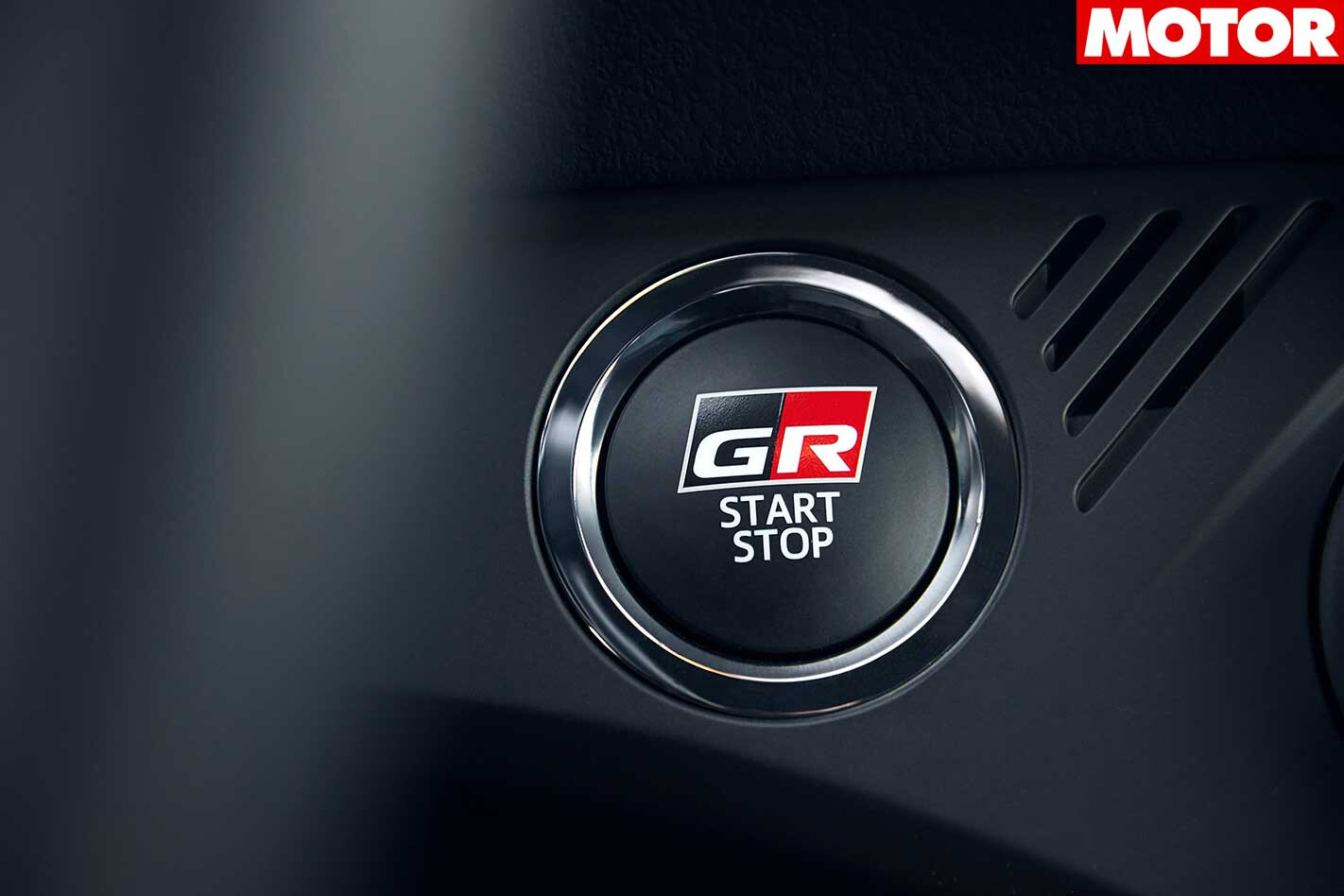 As something to simply enjoy on a Sunday morning blat in the twisty stuff, I’d pick it over others. It is also one of the more involving, simple and likeable hot hatchbacks I’ve driven of late. But I’d be put off by the paint livery and the price anyway.

What matters most is Toyota has created a driver’s car worthy of an enthusiastic following that augurs well for things to come, particular when Gazoo Racing turns its attention to a more promising base car – say, just for argument’s sake, next year’s new Supra.