Before we see the all-new 911 at the LA show in November, we jump in with the engineers as they sign it off

“WE’RE really busy now,” admits Alex Ernst, team leader testing, Porsche. He’s the man heading this test of the 992, Porsche’s replacement 911, and after we’ve been out in the cars today, our seats will be filled by top-tier management for final sign off. The pressure is on then, not least as Porsche will reveal the next Carrera at the LA motor show late November.

This test is one of the last for the new Carrera S. The cars are disguised, though the iconic 911 shape is familiar, if subtly different. August Achleitner, vice president product line 911/718, elaborates; “there won’t be a narrow bodied 911,” all new 992 Carrera models will share the same dimensions with the cars here today, the rear as wide as the outgoing 991 GTS model. The front track grows by 40mm, the front overhang is 20mm longer for styling reasons, while height is boosted by 5mm.

Like the existing GT3, the new 992 Carreras will roll on staggered wheel diameters, with the front axle on the S boasting 20-inch wheels, and the rear 21s. Those, combined with the wider front track allow Porsche to soften the rear anti-roll bar, enabling greater forces on the rear axle when accelerating out of a curve. 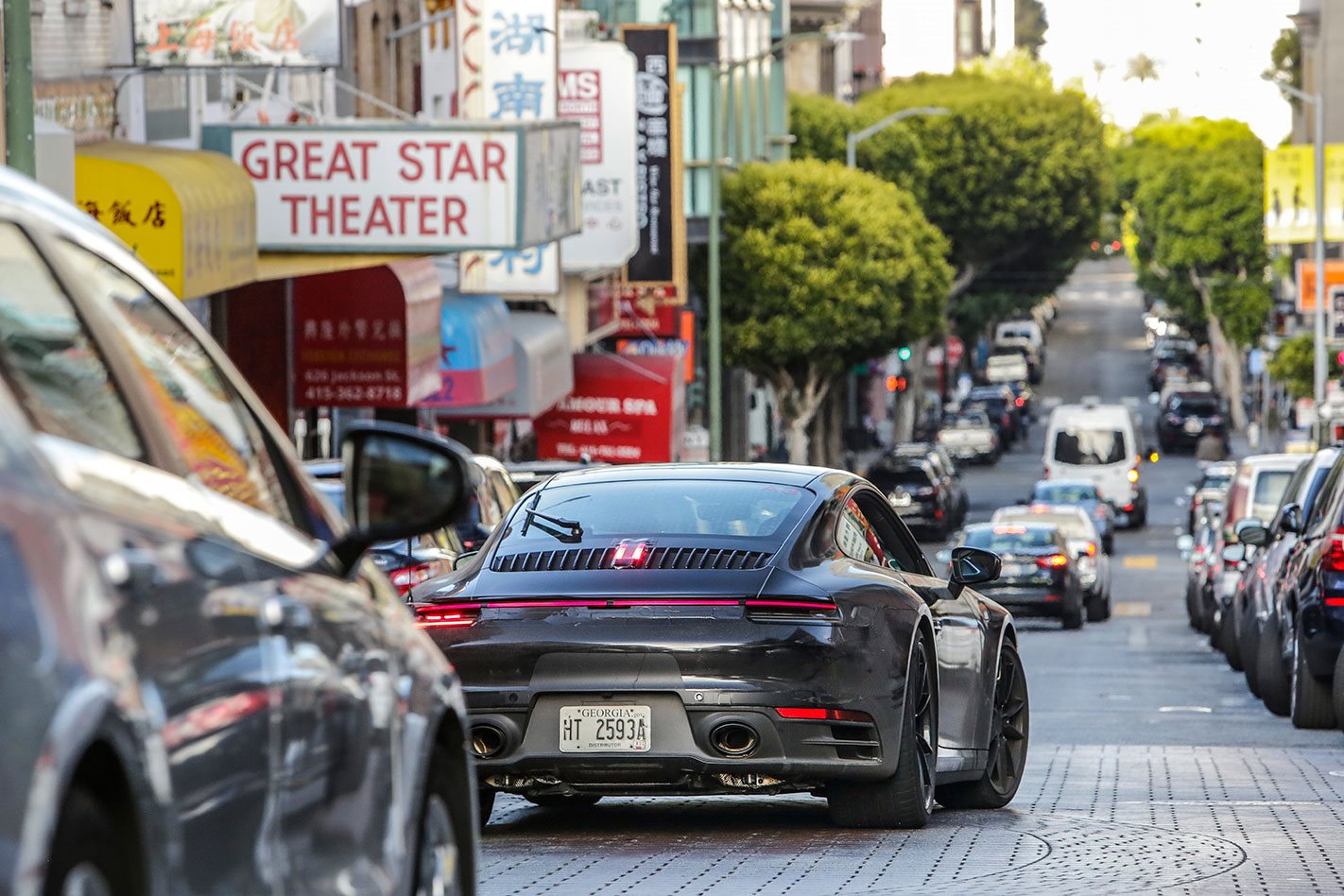 There’s a mix of Carrera S coupe models in convoy, PDK automatic and manual, with optional Sport Chassis and standard, Sport Chassis riding around 10mm lower and featuring a slightly more prominent front spoiler. The model line will be introduced with the rear-wheel-drive Carrera S and four-wheel-drive 4S at LA, in PDK guise only. The standard Carrera will follow in 2019, bringing with it the choice of the seven-speed manual available across the entire Carrera line-up. Convertibles will also join the range in 2019.

Inevitably there are carry-over elements from the 991. The engine block is essentially the same 3.0-litre turbocharged flat-six unit as the 991 series, though there are significant changes. Achleitner explains: “we have a connection between the cylinder heads on both sides, and link directly to the longitudinal beams of the body. It makes the whole system stiffer, feels more rigid.”

It’s not only attached differently, but what’s attached to it has changed. There’s an entirely new induction system, as well as piezo injection to improve efficiency. More significantly is the fitting of a new eight-speed PDK transmission, it derived from the Panamera’s gearbox. It replaces the previous seven-speed PDK transmission, the new automatic not just bringing an additional ratio, but the potential for hybrid drive. 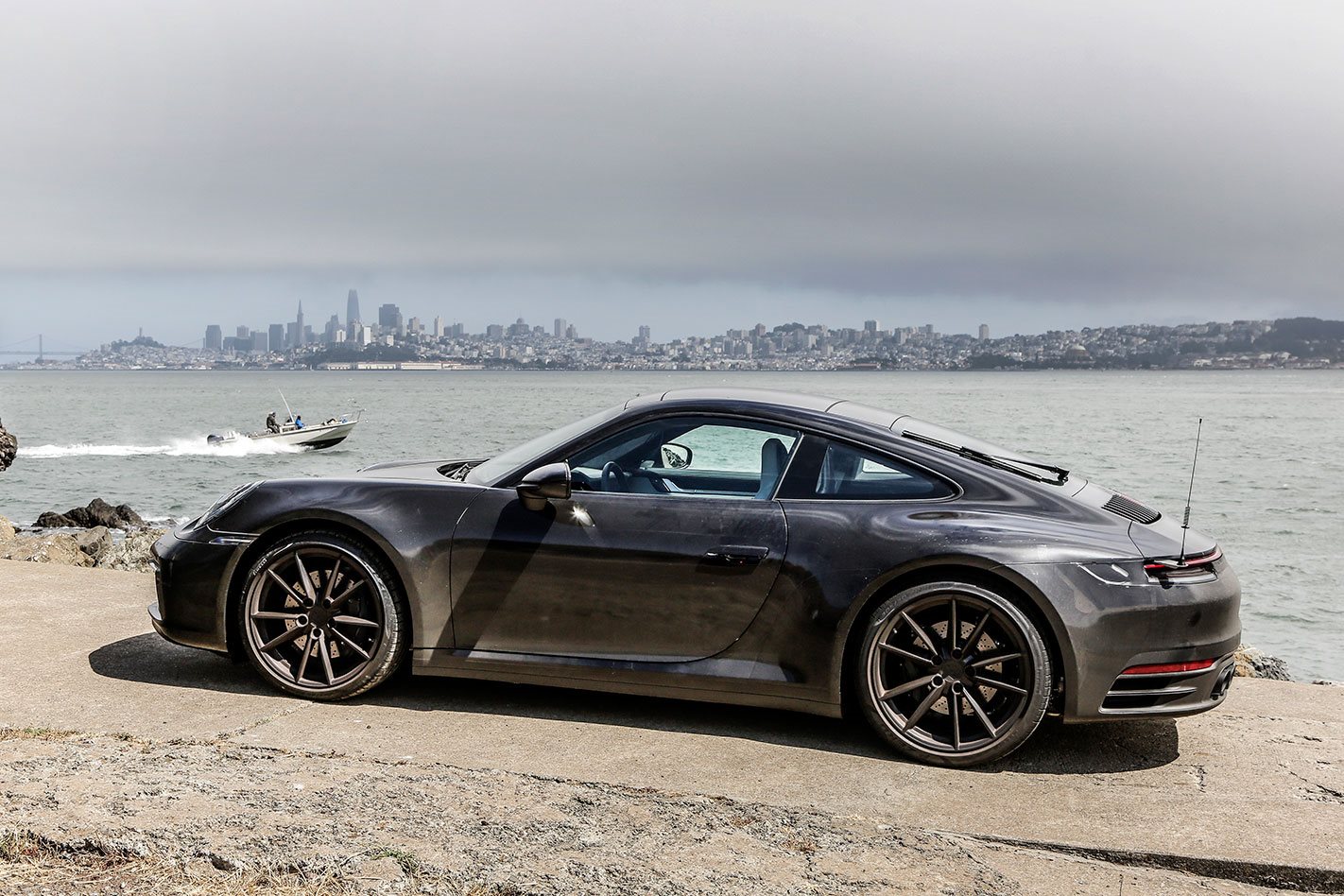 The space in the gearbox housing for a hybrid drive won’t be utilised yet, Achleitner saying: “the whole car in its layout, its structure is prepared for any hybrid solution in the future. We do not do it right now, because we are not yet satisfied with the performance, especially of the batteries.” There’s space in the body to accommodate batteries, too.

With new emissions regulations, weight reduction has been key in the car’s development. More of the body is formed in aluminium, the entire side panel from the A-pillar to the rear wing being aluminium, that saving about 10-15kg at the rear of the car. The need for exhaust filters for European models has added some weight, around 7.5kg, though the 3.0-litre turbo engine in S guise here gains kW, it now delivering the same 331kW as the outgoing 991 GTS, torque being around the 530Nm mark. The Carrera will produce in the region of 280-290kW when it arrives in 2019.

Using launch control with the PDK transmission the Carrera S will have performance to rival the 997 Turbo model, which means a 0-100km/h time comfortably under 4 seconds. As with its predecessors, the 992 will feature different drive modes, with Wet, Normal, Sport, Sport+ and the configurable Individual mode. Sport Chrono will continue to be an option, it adding elements like active engine mounts and additional configurability within the driver modes. 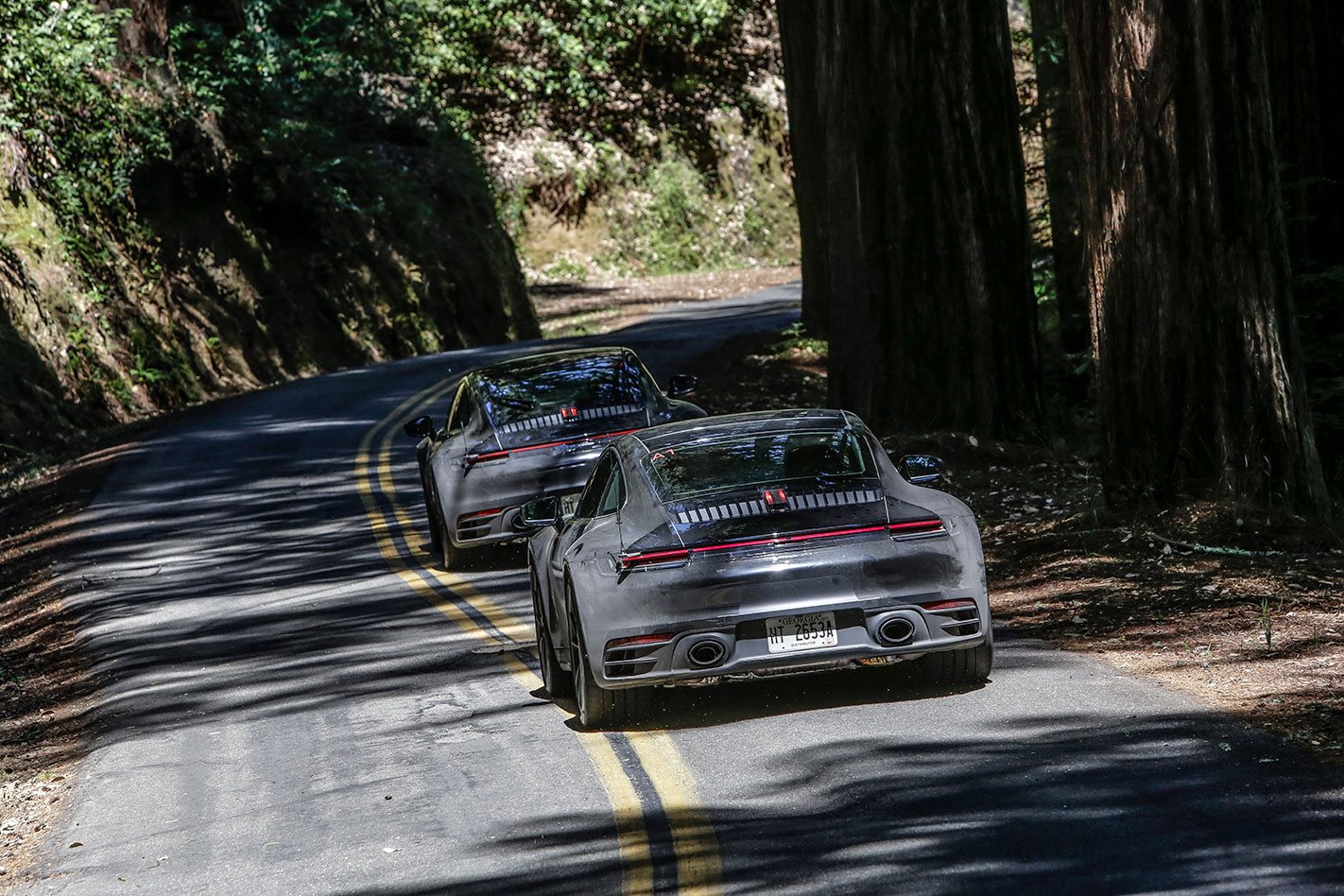 Of those modes, Wet is a new addition, and, says Achleitner, necessary due to the 992 being relatively light and on wide tyres. It is linked to a new sensor system in the front wheel wells that detects water on the road surface. Working independently of the wipers, using acoustic monitoring, if a wet surface is detected the driving systems are primed automatically, the rear spoiler changing its angle of attack for greater downforce, the PSM (Porsche Stability Management) adjusting its responses, and the gearbox is put in its less aggressive Normal mode.

That Wet mode is one of a number of new technologies for the 992, the new Carrera also being offered with active driver aids like Lane Departure Warning and Lane Keep Assist. If that technological creep to autonomy raises a concern, Achleitner is quick to counter: “I think the 911 will be one of the last cars which will be offered with an autonomous system. I’ve been asked ‘do we really need adaptive cruise control for the 911?’ And I said, well, just offer it, and if you’re travelling in heavy traffic then why not? It’s an option so if the customer wants it, and has a situation where they want to use it, but of course it can be switched off, of course.”

In addition to that the 992 will be offered with a night vision option, which detects pedestrians and animals on and around the road. That is displayed on one of the screens surrounding the analogue rev-counter dial, which retains its classic central position in front of the driver. The interior, still largely covered on these pre-series models, is significantly changed, featuring a large central screen that’s shared with the Cayenne. 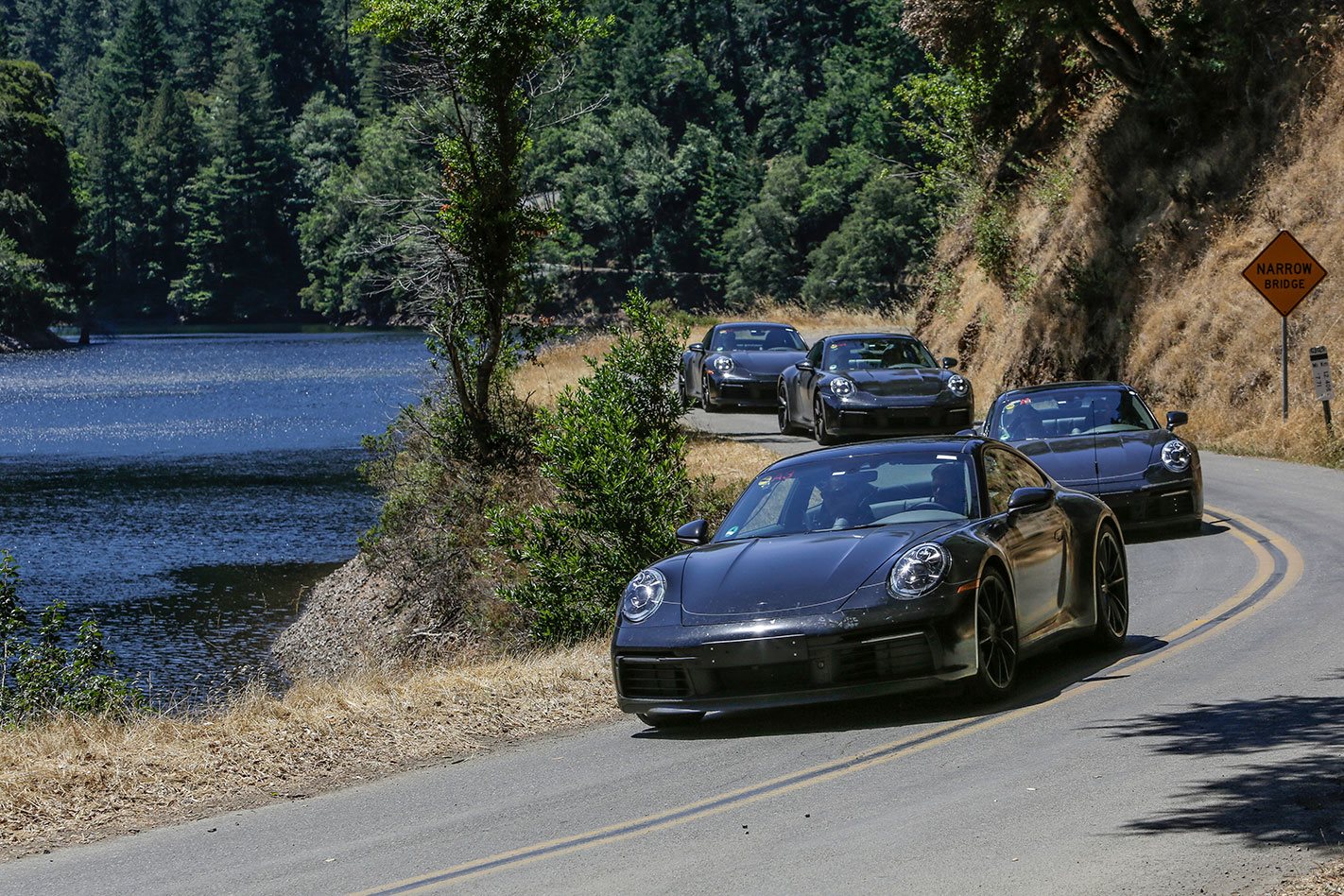 Opening the doors will be more of an event (all 911s will be keyless go), with the door handles popping out as you approach it, returning to position after 10 seconds. Retracted, these help with the 0.29 drag figure, that number achieved with the rear spoiler in its raised ‘eco’ position in European models, other markets having a slightly greater angle of attack at highway speeds for greater downforce.

There’s still plenty of familiar 911 inside: you sit low, the haunches visible in the rear view mirrors. Sadly it’s passenger seat only for us today, as Ernst and his team of engineers do driving duties. In the traffic in town it’s quiet and smooth, the suspension riding with real composure, and there’s a notable improvement in road noise from the front tyres.

Key to the engine changes, over the efficiency gains, admits Matthias Hofstetter, director powertrain product lines 911/718, is improvements in response. The intake system helps here, so too does the movement of the intercoolers from a split system either side of the engine to a unit above it. The result is palpable, the 992 feeling hugely quick when escaping the confines of San Francisco’s busy streets, exploring the roads that wind up into the mountains. 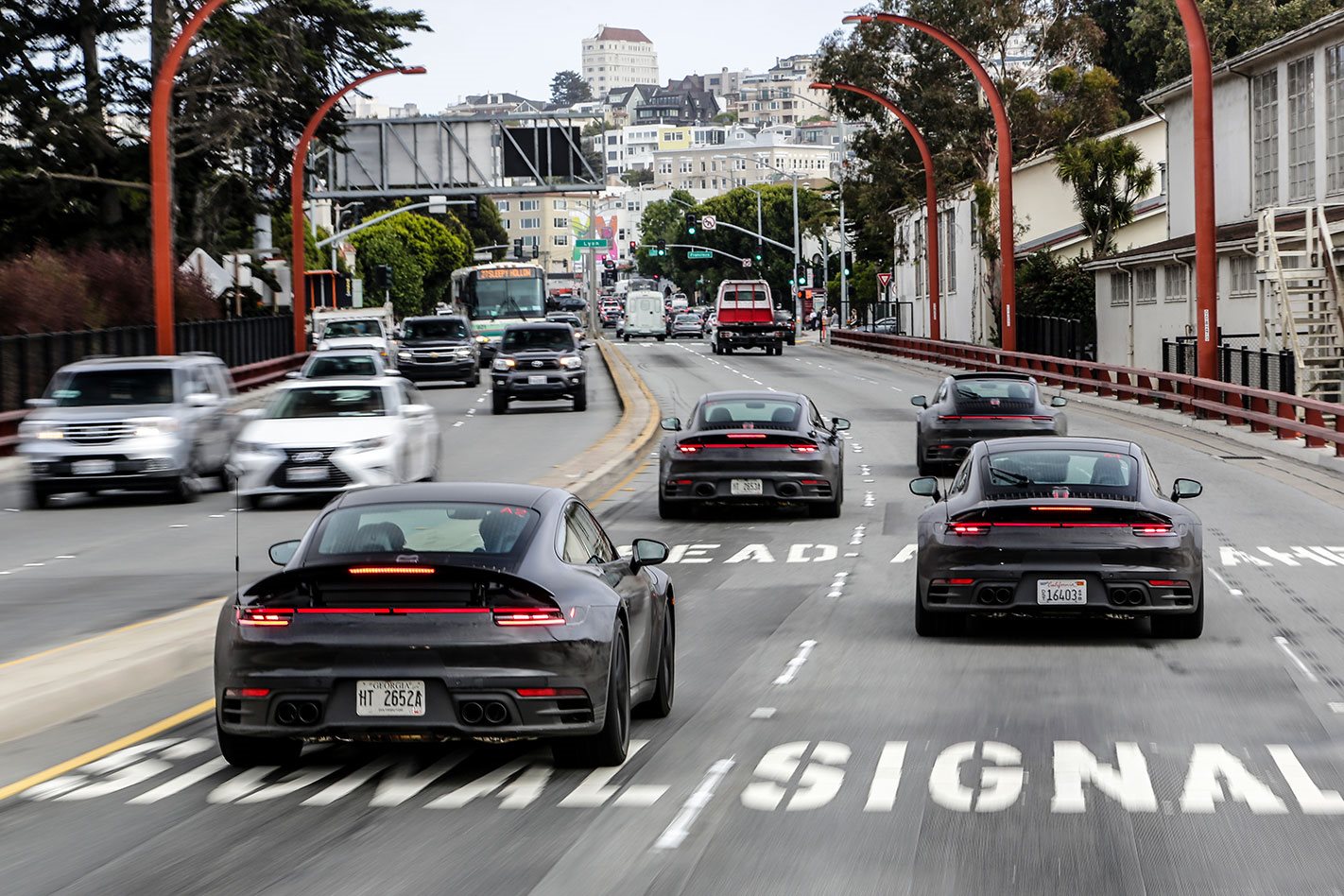 Optional rear-wheel steering assists with the agility, though even without it the promise is of a sharper turn in, and greater grip. The road surfaces here are poor, the 992 managing the tricky tarmac with fine control, both wheel and body. As standard the 992 will feature standard steel brakes, with both Porsche Surface Coated Brakes (PSCB) with their hard tungsten carbide surface, or Porsche Ceramic Composite Brakes (PCCB) offered optionally.

The eight-speed PDK shifts with the speed we’ve come to expect from Porsche’s paddle-shifted autos, while the manual retains the rev-matching throttle blips when in Sport modes and above.

Thankfully, the manual has been retained, helped by a resurgence of demand. Global manual sales sit around 15 percent, but markets like the USA actually taking a greater percentage of manuals sales, particularly higher up the model range. 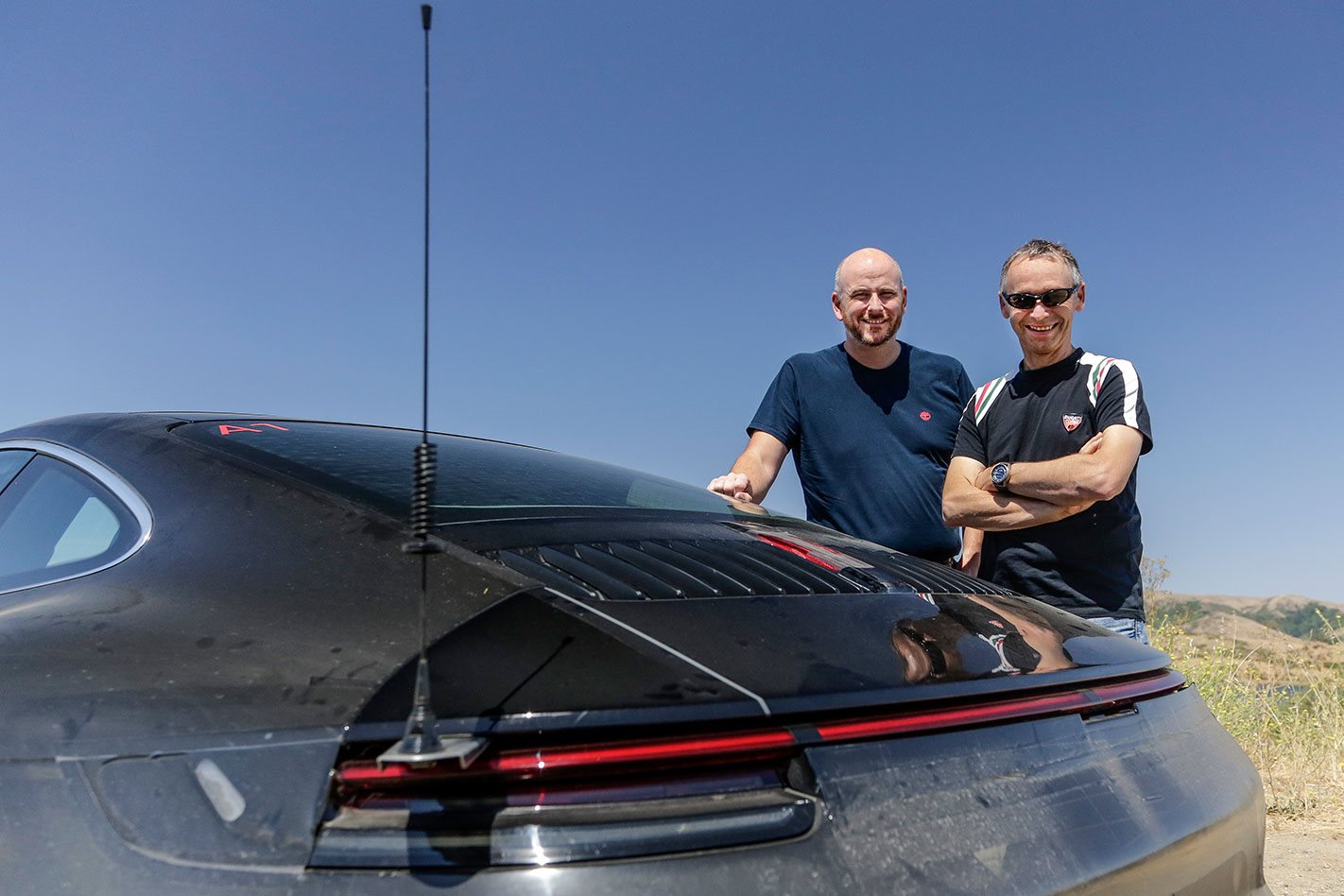 That model range will follow the established route, with Carrera, Carrera S and GTS, in coupe, Targa and Cabriolet guises in rear- or four-wheel drive, while there’s room for the more driver-focused T model, its success surprising insiders at Porsche. Above that will come the inevitable Turbo and Turbo S versions, the mightiest anticipated to have in excess of 485kW, while the GT department will add GT3 and GT3 RS models for the track drivers out there.

Rumours abound that the GT cars may switch to turbocharged engines, but they currently remain just that, rumours. The hope is the GT team will hang onto the naturally aspirated 4.0-litre flat-six for a while yet.

Time will tell, and more details will come as the official wraps come off the line up later this year, but our early ride in the 992 does little to suggest that Porsche has done anything to gamble with the 911’s unique appeal in the sports car marketplace, and made its future all the more certain at the same time. 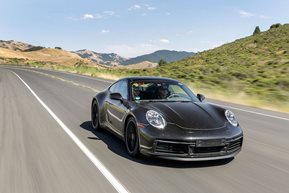