Scott McLaughlin has his name written on two Ford Mustangs. One of them he drove to his third straight Supercars title this year. And then there’s the really powerful one.

The Scott McLaughlin Limited Edition by Herrod Performance, or SM17 for short, might have number plates and leather seats instead of sponsor decals and a roll cage, but it’s the best part of 100kW up on its circuit-dwelling sibling. The gulf in torque is even wider.

All in all, 578kW and 810Nm are sent to the rear wheels courtesy of a monster 3.0-litre supercharger nestled in the vee of the otherwise standard 5.0-litre Coyote V8.

But what is an SM17 and how did it come about? The car’s creator, tuning legend Rob Herrod, has the answers. 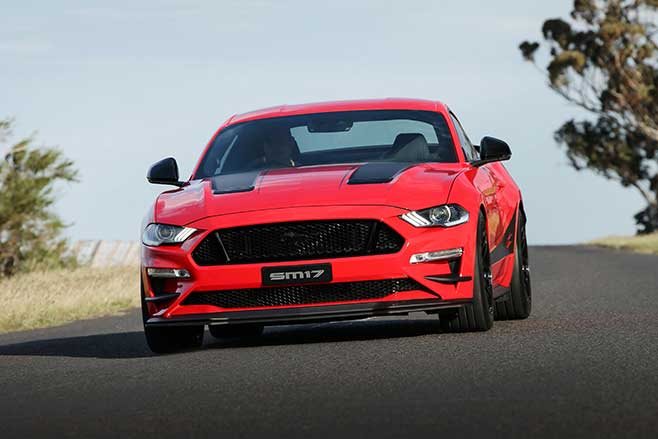 “When we did the Dick Johnson Limited Edition car we were going to offer a Dick Johnson and a Scott McLaughlin pack", said Herrod.

"And then with the R-Spec [program] going on, I said ‘It’s a bit hard for me to do a McLaughlin car, I’ve only got time to do 30 [Dick Johnson] cars.'

“Wayne McLaughlin, who’s Scott’s father, and I hang out at Supercars rounds and he’s been on my back to do a car, so with the lad looking like winning his third championship we decided 'let’s do it'.”

Left unsaid and unconfirmed is that with McLaughlin expected to head Stateside to Indycar next year, the SM17 was somewhat of a ‘now or never’ proposition. 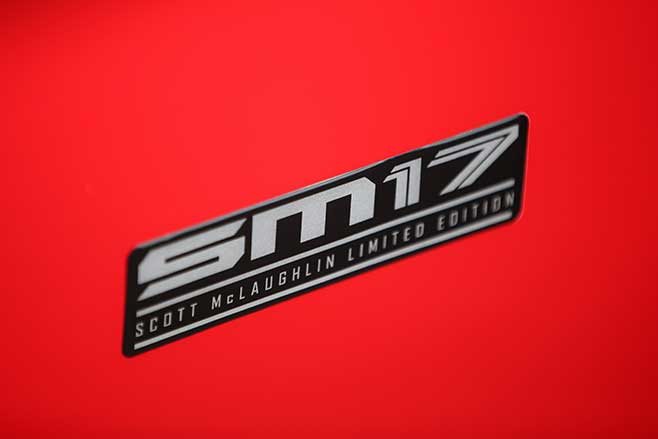 The final number of cars is still to be determined, but it looks like 30 will head across the ditch to New Zealand and no more than 100 will remain in Australia, while the car costs around $125,000 depending on the options fitted.

McLaughlin explained what he wanted visually and left Herrod to make it happen: Red paint (though other colours are available), gloss black exterior highlights with satin black stripes.

The 27-year-old Kiwi wasn’t even a glint in his parents’ eyes when power dressing was popular but he clearly understands the concept as the SM17 exudes authority. 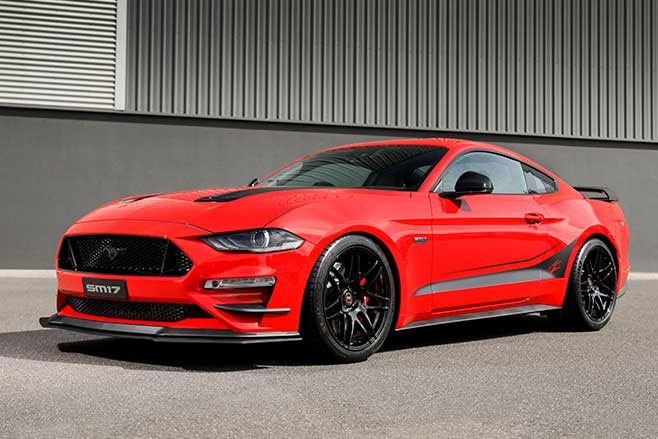 The bold colour scheme does its part, but credit must also go to the lowered ride-height and the massive rolling stock, the wheels increasing to 20 inches in diameter and 9.5 inches wide front and 11 inches wide rear.

Adjustable anti-roll bars and recalibrated Magneride dampers round out the suspension changes.

READ The speed secrets of the DJR Team Penske Ford Mustang
Those massive rear boots, that sit snugly in the Mustang’s arches thanks to the bespoke wheel design, do a heroic job of turning nearly 800bhp into forward motion.

Driving the SM17 in the wild

In the dry the SM17 has to be actively encouraged to break traction; its typical full-throttle behaviour is to just surge towards the horizon, gulping through its gears like Pac-Man munching cookies.

Unsurprisingly, much greater circumspection is needed in the wet as the rear wheels can and will spin through to fifth gear, but it requires respect, not fear.

The intimidation factor is relatively low as the trust factor is reasonably high; the steering feels factory, only controlling a grippier front end, and when the rear does let go, it does so progressively. 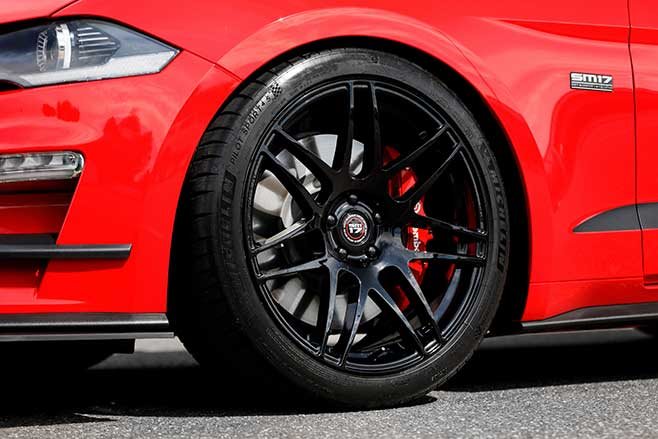 Horsepower is clearly the headline act here but, appropriately for a car named after a racing driver, the chassis shines equally brightly.

The SM17 sits flat and generates remarkable lateral forces in the corners; I haven’t driven a Shelby GT350 but it must surely be in the ballpark, especially if you switched the standard Michelin PS4s for more focused Cup 2s.

There’s better communication than in a standard Mustang, the steering telegraphing when the front tyres have had enough and only at the very limit does the car’s weight make itself apparent.

At this point point you’re travelling fast enough to need a racetrack, but that’s not an environment the SM17 should fear; Herrod claims to have completed dozens of consecutive laps at Winton during development. 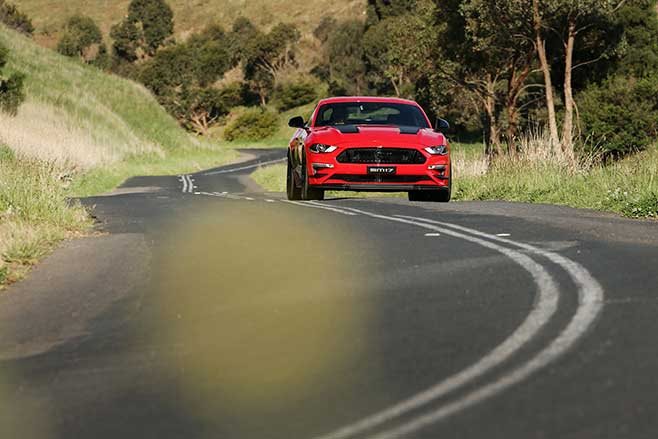 A transmission cooler is added to cars equipped with the 10-speed auto and all are fitted with an uprated engine oil cooler to moderate the immense heat generated by the supercharged V8, to ensure all 578 kilowatts are available at all times.

The SM17 uses a 3.0-litre Whipple supercharger instead of the more common Eaton TVS R2650 installed on the Mustang R-Spec and Roush RS3. 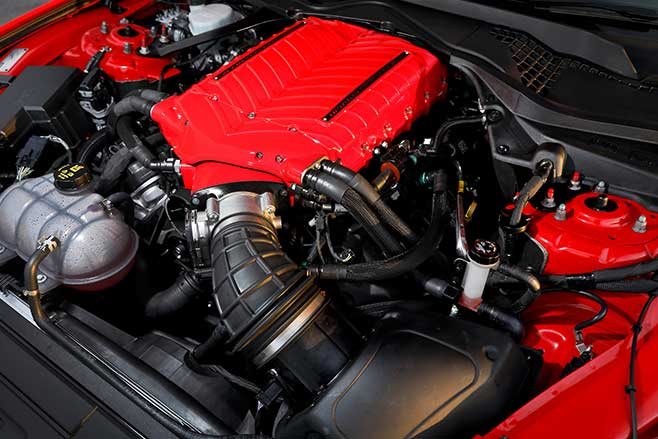 While still a twin-screw design, the Whipple develops boost more progressively, and the power ‘curve’ is more of a straight line that builds and builds towards redline.

Think of the supercharger as adding displacement, turning the Coyote into a rev-happy 8.0-litre V8, rather than injecting boost in the traditional sense with a massive slug of torque.

It’s loony fast and the digital speedo a blur, especially if you lock the transmission in fourth or fifth and ride the wave. Melbourne’s lockdown rules meant our usual performance testing wasn’t possible, but the bum VBox extrapolates a quarter-mile speed about the 205km/h mark and that feels about right. 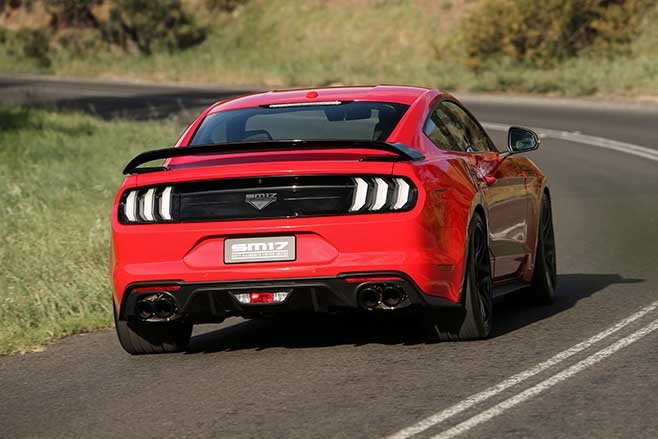 There’s plenty of aural drama, too. The jackhammer idle is like a death metal blast beat in its rhythmic intensity and consistency and the Whipple’s signature whine under full load is nicely balanced with the noise of the custom cat-back exhaust.

There is a bit of exhaust boom in the cabin under certain cruising conditions - tenth gear, 90km/h - and the big tyres create plenty of road noise, but the MagneRide suspension soaks up most bumps for a firm but fair ride.

Gearbox choice is a tough one. Herrod’s automatic calibration is very good, the transmission crisper and more decisive in its shifts, a little theatrical nudge in the back accompanying each one at slow speeds.

However, there’s still a slight delay between throttle application and engine response, particularly if there’s a series of inputs in quick succession, and in a car this fast and powerful, accuracy is everything.

The manual might be the pick, as the SM17 certainly has the grunt to pull the long gearing. 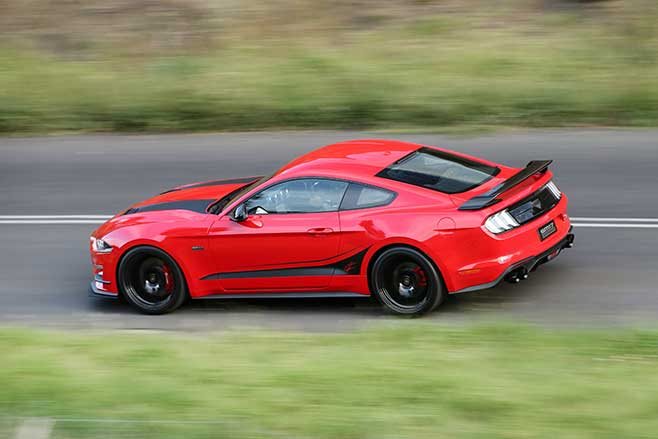 All in all, the SM17 Mustang is really impressive.

“With everything I’ve learnt through the first compliance pack through the R-Spec and all the other cars we’ve built, I knew I had everything in place to build a really, really good car,” Herrod told us.

Having been fortunate enough to drive all of Rob’s Mustang creations, I agree; the SM17 is his best yet.

It has all the aggression you’d expect from a modified car while retaining its factory manners in terms of ride, response and reliability. It’s a fine tribute to a fine racing driver. 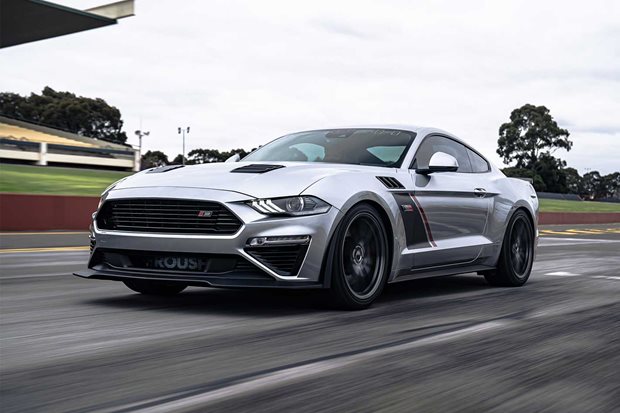