Cons:
Could be pricey; not very fast

Traces of old-school Mazda sports-car DNA are to be found in the new MX-30 compact crossover.

Namely freestyle doors, a la RX-8, and news of an electric version down the track with, yes, a rotary range extender.

The funky MX-30 is based on the same small-car architecture as the Mazda3 and CX-30, and will come in both mildly-hybridised petrol-electric and full electric versions.

The latter, Mazda’s EV debut, is the one we’re focusing on here. 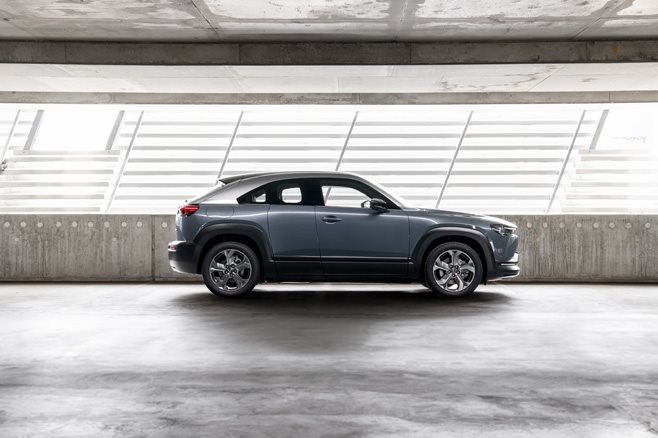 Fitting a smaller battery minimises cost and weight, and helps packaging, with Mazda betting that most city-dwelling owners will never need more range between charges.

If they do, they can buy the petrol version – or hang on until said range-extender arrives possibly next year, although Mazda Oz is yet to crunch the numbers on local viability.

The MX-30 shares the exact same dimensions as the CX-30, but is 10mm taller. It also runs a torsion-beam rear end, and in EV guise, weighs 1654kg, or 160kg more than the petrol version. All of that weight is, of course, positioned low in the car.

Mazda says its new EV can be charged from 20 to 80 percent in three hours from a 6kW charger, or 36 minutes from a 50kW one. 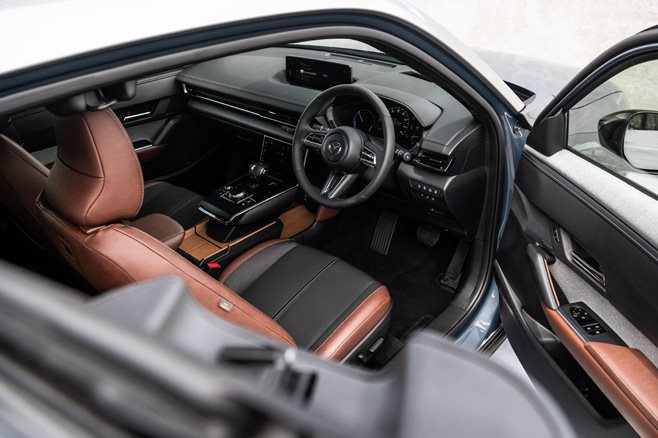 We only had a brief drive of a pre-production MX-30 EV around a proving ground, but we will have a more in-depth drive as soon as we can, where we’ll also test the range.

Getting into the MX-30, you’re immediately struck by an interior ambience and quality that feels a notch higher, even by Mazda standards. They’ve done a great job; it’s even more ‘Japanese BMW’ than our reigning Car of the Year, the CX-30.

A semi-floating centre console channels a little Volvo, and interesting use of cork inlays and a felt-like material on the door-cards remind us of the BMW i3. 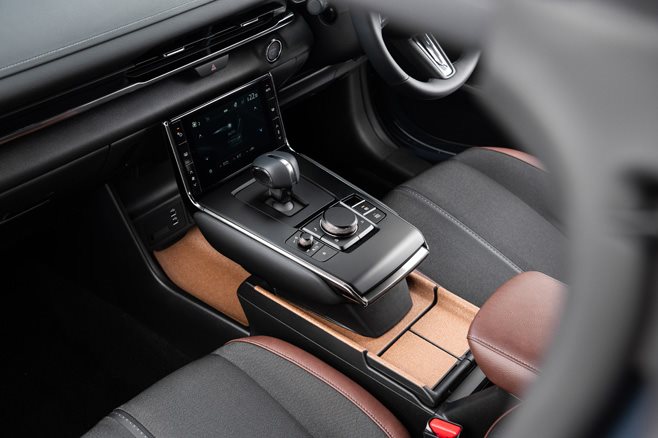 While the motor hardly musters Porsche Taycan levels of acceleration, it does offer pleasing and punchy instant torque, buttery-smooth refinement and calming, near-silent operation (save for some buffeting from the mirrors around 110km/h and a very artificial, odd Jetsons-like acceleration noise).

While it feels tall and has noticeable body roll, the MX-30 has all the best handling and driving attributes we’ve come to know from Mazda of late. It hides its extra mass well, the heavier EV taxing its tyres a little more than the petrol versions, but it’s still quite a spirited drive. It’s just not particularly quick. There’s no word on whether more powerful models may follow.

There are five levels of re-gen ‘aggressiveness’, adjustable via steering paddles, like other EVs. 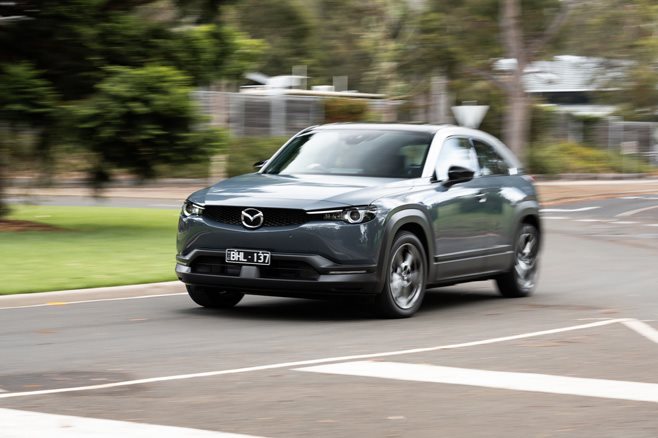 Elsewhere, despite that sloping roof, the EV MX-30 manages 311 litres of boot space compared to a petrol CX-30’s 317L. The price for style, however, is poor rear three-quarter visibility (although there are blind-spot monitors) and compromised rear entry.

While rear ingress/egress is good, you have to open the front doors before you can open the rears.

Rear passenger visibility is pretty machine-gun pillbox and headroom is cosy, but there are no AC vents or USB ports. You do get a centre fold-out armrest, at least.

Certainly, anyone with offspring is better off buying something with more practical rear doors, and not just because it’s likely to cost less. 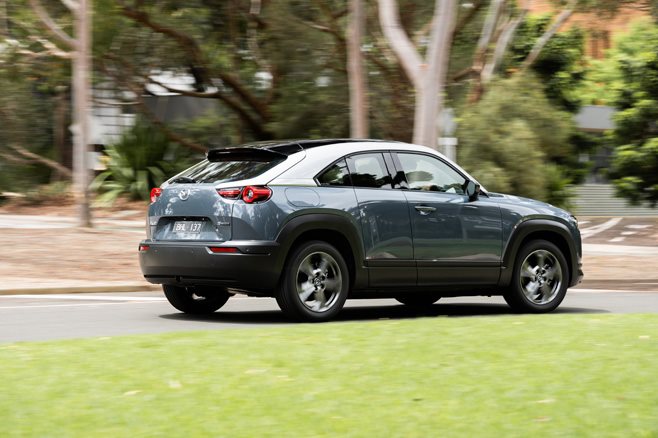 With the hybridised, atmo 114kW 2.0-litre MX-30 on sale first (in April), Mazda has not announced MX-30 pricing or specification for either versions. But style and quirkiness will likely come at a fair premium. 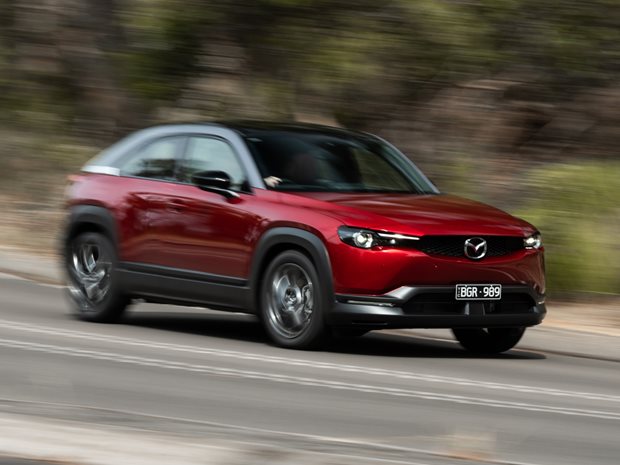 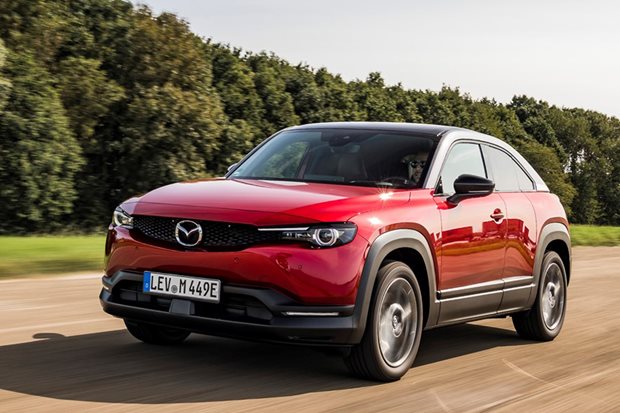 The Mazda MX-30 is a very different take on EVs... 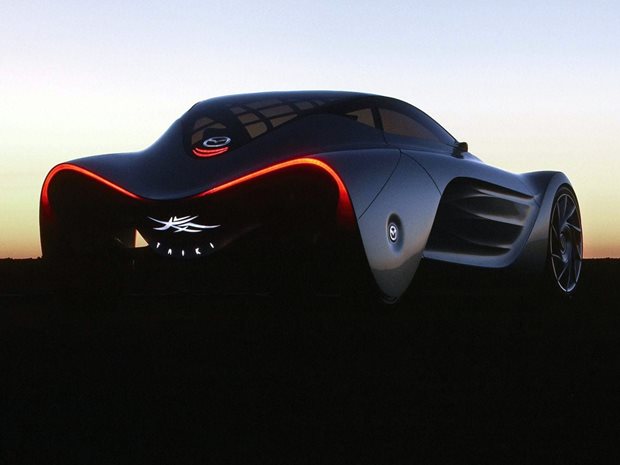 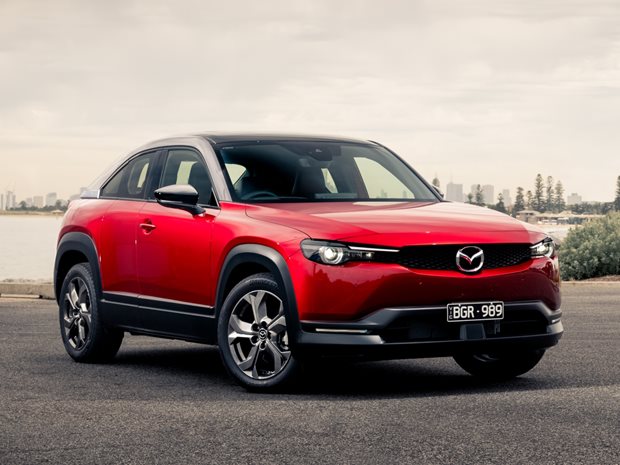