I FEEL like other drivers are silently passing judgement, sniggering from their macho-mobiles. I mean, a car says a lot about its owner, and they don’t know it’s a press car. To them, it just looks like I reckon this is the best way to spend $52K.

Well, from the outset, let me say I don’t think that. In all likelihood, too, the majority probably see a good-looking compact Audi rag-top when they look at my new Scuba Blue long-termer.

Either way, I begin three months with the A3 cabriolet like any good road-tester, with my mind as open as the cabin. 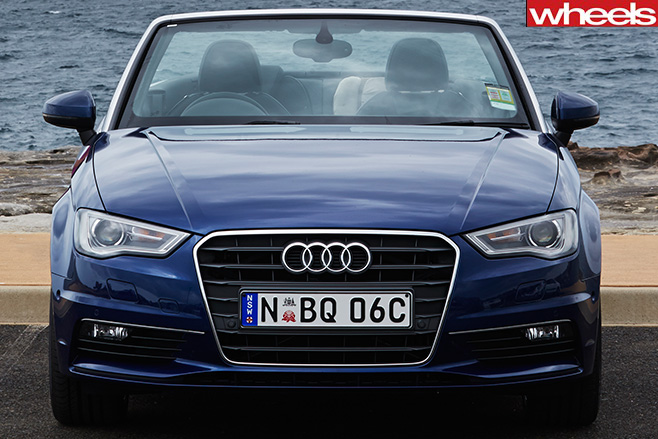 It’s not that I have a problem with the A3’s image, more that it doesn’t match mine. I want my car to reflect my offbeat tastes and, ideally, the effort I’ve put into owning and customising something a bit different. Admittedly, this is difficult with a new car, especially a trendy one like this.

What could I do to (reversibly) modify the A3, I wondered. Hubcap removal is a proven way to give a base hatch a bit of eff-off cool, but wouldn’t apply here, while a Nurburgring map decal has never improved any car. Perhaps a tongue-in-cheek ‘Real Aussies Drive Utes’ bumper sticker, though that might upset utilitarians as much as Audi HQ.

Fortunately, the rest of the A3 line-up,
including the cylinder-on-demand 1.4 TFSI sedan in which I’ll spend a second three months, is largely free of image issues.

Paranoia aside, my initial impressions of the cabrio are that the A3 becomes less good along its roofless journey.

Purists may scoff but I don’t mind a sunroof. It can transform a claustrophobic cabin, brings great airflow, and can be nice on a summer night. But I usually draw the line at a moonroof. Convertibles I generally view as a body rigidity-reduction step too far. I don’t dig their look-at-me personality or getting sunburned while stuck in traffic. 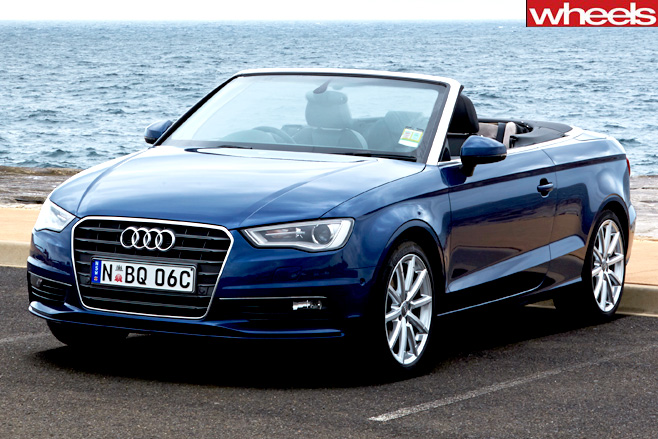 The can-openered A3 body isn’t floppy and neither should it be considering how much heavier it is than its siblings (presumably largely in chassis reinforcement). But over bumps it does do the torsional twist, which you might overlook if not for the loud creaking of the interior roof trim.

And the stiff-legged low-speed ride doesn’t help because it transmits its harshness to the body as well as the occupants.

However, the powered operation of the roof itself leaves little to be desired. It’s quick and, like most, can be opened and closed at low speeds (up to 50km/h). Whether it’s raised or lowered, the A3 is a crisply styled, sedan-based
drop-top that’s much better looking than
the previous hatchback-derived version.

Having come to the conclusion that the modern dual-clutch is largely free of the dithering/abrupt clutch engagement that plagued early examples, I welcomed getting an ‘auto’ Audi. But so far the A3’s gearbox takes me back. Initial clutch engagement can be hesitant, which takes the sparkle off the turbo four’s bottom end and has left me hanging at intersections. 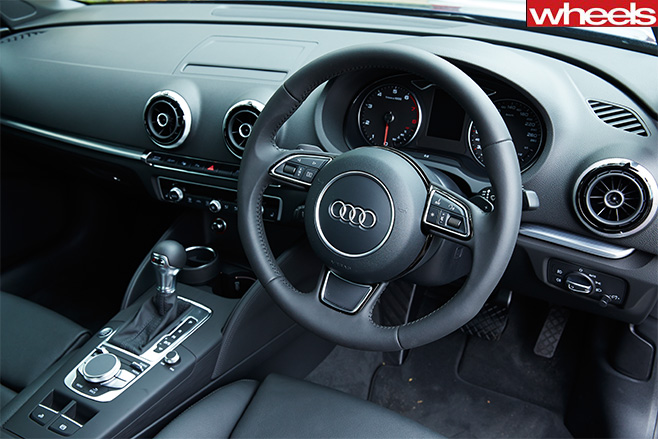 The trick with the dual-clutcher is being decisive with the throttle, though that can result in a lurching getaway. But once into the 1.8’s mid-range, the A3 offers lively performance with good overall fuel economy, so far.

It’s a bit of a mixed bag, then. So when friends enquire how my new car’s going, I don’t lie. I tell them that, if it was a manual shooting brake that rode well and had torque-vectoring AWD and a twin-turbo V6, it’d be faultless.

Until such time as that niche has been filled, I’ll remain comfortable in the knowledge there’s one group of drivers on the road who won’t judge me – blokes in A3 cabrios. Trouble is, I’ve yet to see any.

MOVING to a new suburb at the same time as getting a new long-termer broke a basic rule of any scientific experiment: I had changed two variables at once. The conclusion? Well, I’ve still got another month in the A3 cabrio, but so far my drive to the office isn’t as enjoyable as it used to be.

While this is partly because I have to drive further, some of it in stop-start traffic, it also suggests the A3 is less agreeable than the Mazda 6 it replaced. Of course, no-one cares how a luxury convertible and a family wagon compare, but you’d expect a $52K premium car to be better than a $40K-odd one from a mainstream maker.

In Audi’s defence, the cabrio is an exception to the rule that says ‘premo’ cars usually do justify the price premium by being, well, nicer. I reckon the sedan version of the A3 should go closer, and I’ll find out in a month or so when I swap into the $12K-cheaper booted 1.4 TFSI.

It’s possible (if quite unlikely) the sedan will eradicate the slow, less-than-smooth dual-clutch gearbox behaviour that plagues the drop-top, though the smaller, cylinder-on-demand donk will certainly improve economy. Still, I barely remember the last time I filled the ragtop anyway. 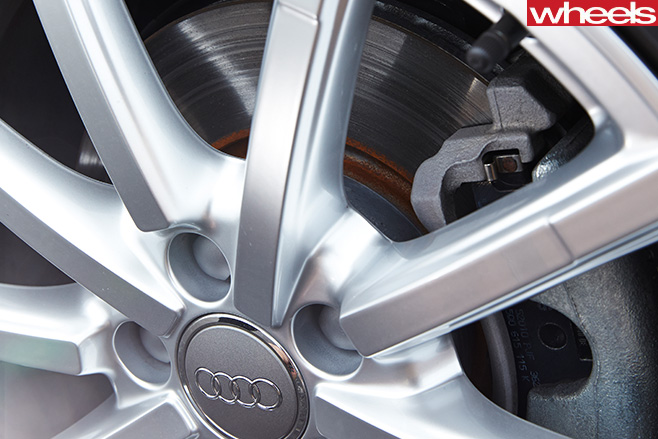 I particularly like the lip spoiler styled into the bootlid. The wheels strike a nice luxo/sport balance, too.

The sedan is sure to eliminate the cabrio’s small but noticeable twist and creak of the body over bumpy roads. There’ll be less noise in the cabin and it might even ride with greater low-speed polish, which would be welcome.

But I did enjoy a recent drive in the cabrio. What was different? Unlike my usual daily grind, it was late at night and there was no one on the road.

While tentatively treading the throttle to creep forward brings snoozy response, and nailing it to safely turn across oncoming traffic brings a frightening pause and then a fit of acceleration, giving the cabrio a clear road and more deliberate control inputs brings it alive… sort of.

Oddly, given the cabrio’s positioning, it seems to work better with a commanding driving style. If you really pedal the A3, the gearbox becomes smoother, and using the shift paddles keeps the fizzy 1.8 turbo in the meat of its 250Nm torque band.

The balance of the chassis satisfies once you’ve pushed through the inert steering, and the grip level is good, as is power-down, as long as the road is dry.

Under the cover of darkness, I even dropped the top (while I still can) because, as a grass-could-be-greener type, I probably won’t appreciate this feature until it’s gone.

DESPITE our image differences, the long-term Audi cabrio and I do have one thing in common. You see, I’m not a morning person. It takes time and a strong cup of tea before I can function. Similarly, the Audi A3 often stumbles and clunks through the shift into second just after it has been cold-started. You have to go easy on it until it warms up, which takes about half a minute. I need about half an hour.

The Audi is otherwise switched-on when it’s fully awake (though I can make no guarantees about its driver), and I’ve been impressed by the driver interface lately. I’m particularly taken by its ability to take a letter of the alphabet scrawled on the centre console MMI dial and look up a name in a paired phone’s address book. It’s cool and, most importantly, it works. My four-year-old daughter Grace, who is learning to write, loves the feature, too.

The MMI interface’s ability to read out text messages hasn’t been handy yet – I only just discovered it – but even the cabrio knows it’s not an “Ordi”. 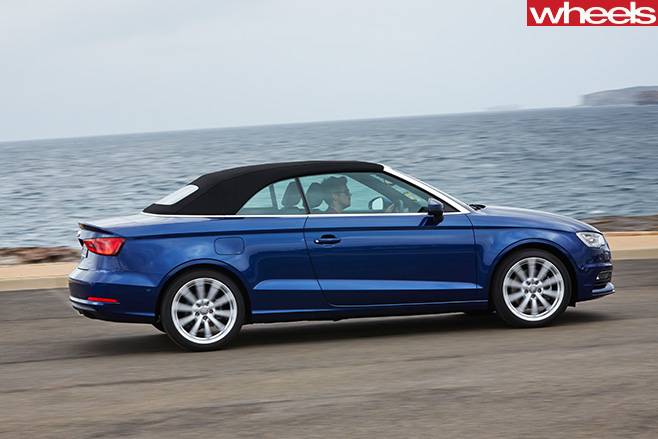 The minimum specified fuel RON in the spec sheet and inside the fuel flap is regular 91-octane, so that’s what I filled the A3 with initially. Over those first few tanks I began to form the opinion that the 1.8-litre turbo four was little more than adequate. I thought that maybe the cabrio’s extra weight compared with the Audi A3 sedan or sportback versions was taking the sparkle off.

Then I put 95-octane in the other day and it was a revelation. The cabrio isn’t necessarily a whole lot quicker, but it is noticeably more eager at low revs, and more flexible; it just feels (and even sounds) like a happier engine.

The lower ambient air temperatures of Sydney’s first cold autumn days made this yet another flawed experiment (see last issue’s update about changing two variables at once). Is the donk’s newfound responsiveness due to the octane boost or the air temperature drop? It’s probably a bit of both.

Either way, now I’m looking forward to trying 98-octane premium, and to even colder weather. If there’s one good thing about the colder months, it’s the power boost it brings in turbo cars. That’s probably the only good thing about winter actually because otherwise I hate the cold, especially first thing. 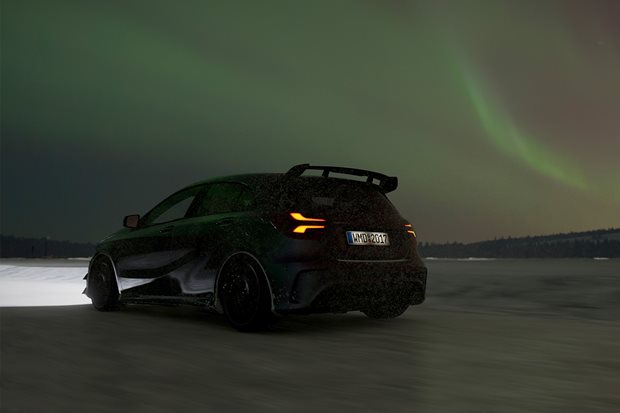