The S8 nameplate mightn’t figure highly in the pantheon of go-fast greatness, but it takes just 4.1 seconds for Audi’s flagship sports limo to convince you otherwise.

It certainly feels as quick as the claim. Load the 4.0-litre twin-turbo V8 up against the brake in the first of its eight S-tronic ratios, step off at 2400rpm and the S8 pins you mercilessly into its 22-way-adjustable Valcona leather seat.

And while the TFSI engine doesn’t boast kilowatt figures quite as glorious as the ‘400-plus’ of its fellow Germans, making do with just 382kW, its stunning acceleration is mostly thanks to a handy 650Nm peak on tap from just 1700rpm.

With quattro drive plying torque through optional 275mm-wide hoops, it’s a party trick of effortless consistency that rival manufacturers’ rear-drivers promise but so often fail to put into practice.

Equally fuss-free is the relentless shove to its 250km/h speed-limiter, as sampled on the autobahns around Dusseldorf, Germany, and the retardation of its formidable 1990kg heft at the first sign of a meandering Polish caravan, thanks to its 400mm/363mm carbon-ceramic brakes. And yet despite RS-like grit worthy of taking the fight to the world’s Ms, AMGs and GTSs, it sports a mere ‘S’ badge. And fittingly so, we reckon.

Despite aggressive front and rear styling, a low stance and brash 21-inch rolling stock, the first new-gen, newly face-lifted S8 to lob in Australia is first and foremost a limousine.

A particularly potent one, granted, but you quickly discover that it favours high-speed stability and iron-clad surety – plus its handy acceleration/deceleration talents – over dynamic agility and corner-carving flamboyance. 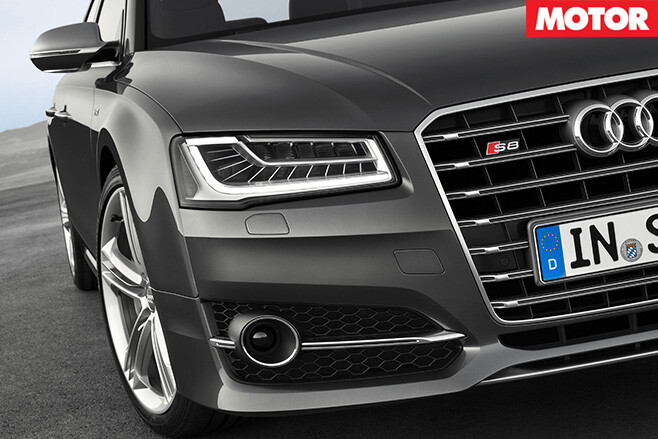 It’s firmer throughout its various adaptive suspension settings than the A8 – with which it shares its myriad luxo-niceties – but errs on the side of strong body control and minimising float in the ride rather than imbuing the chassis with a crisp edge in the corners.

Above 200km/h, it feels more planted, composed and confidence inspiring than an A8. The S8 rides exceptionally smoothly on those 21s – at least on Germany’s generally smooth roads. Its beautiful blend of chassis control and ride comfort is definitely a strong suit.

The electro-mechanical steering that has replaced the old car’s hydraulic system is no pillar of fizzy communication, but the S8 certainly feels lighter and more direct in the front end than the regular A8s sampled in Dusseldorf. And the quattro’s natural rear-bias (40/60 front-to-rear) seems more attuned to guiding the nose at turn-in rather than tail-out antics. But that’s no foul. Primarily, the S8 delivers class, maturity and High Street luxury in spades and has a decent halo of sportiness without feeling the need to be dictated by it.

This extends to the cabin treatment, a smorgasbord of double-stitched leather, Alcantara, carbonfibre and brushed aluminium, more opulent than your usual Audi fare but undeniably pressed from Ingolstadt’s familiar, time-honoured mould. And from the four-zone climate control to in-car internet, it’s got the big bells and loud whistles covered.

It’s quiet and comfortable at a cruise, although switch the exhaust to Dynamic (read: loud) using Audi’s Drive Select system and it adds a nice bassy rumble to the exhaust. The S8 brilliantly balances luxury and performance with its autobahn-bombing aims. And by avoiding too many overt go-fast pretentions and RS expectations, the S8 is an exceptionally quick car for what it is.

But at $280,610 (exact pricing will be confirmed closer to its second quarter 2014 Australian release), it’s an RS in all but name.