Forget flat-out on the Autobahn, we rip Europe’s hottest limos from their natural habitat and test their mettle on roads less travelled

The essence of white-knuckle driving pleasure is composed of howling V8s, flickering stability control lights and a lust factor that grows in proportion with speed.

Which is why this trio has absolutely no ambition to stitch up the hole in the ozone layer. Quite the contrary. In 72 hours, we navigated the breathtaking roads of rural Upper Bavaria, Salzburg and Tyrol where we could drive the rubber socks off these three high-performance five-seat flagships – the Audi S8, the Jaguar XJR and the Mercedes-Benz S63 AMG 4MATIC long-wheelbase – in a remote, radar-free environment.

If cost had been the decider, this comparison would have ended before it began. Both the XJR and S63 are the current flagships in each car’s model range, which penalises them with a hefty premium over less-endowed variants whereas Ingolstadt decided to position the A8L W12 as its flagship model, shortening the S8’s price.

Expected to land in Australia at around $270,000, it will undercut the regular Mercedes S63 AMG (long-wheelbase isn’t planned for Australia, nor is the 4MATIC all-wheel drive system) by about $100K, and be around $30K cheaper than Jaguar’s XJR.

But the Mercedes also gives you the most for your money. Grunt wise, the 430kW/900Nm S-Class easily eclipses the 405kW/680Nm Jaguar and 382kW/650Nm Audi. Its 5.5-litre twin-turbo V8 engine runs quietly and smoothly, throttle response (even in sport mode) is relatively restrained and relaxed, and the seven-speed transmission surfs the immense wave of torque in a subtle manner. 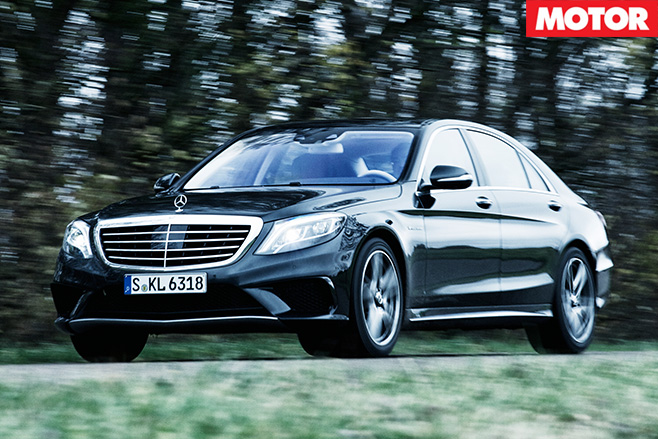 The 1995kg S63 4MATIC slingshots to 100km/h in just 4.0sec with no trace of wheelspin, all-wheel drive mastering its 900Nm of gut-wrenching punch to reach triple figures with only one gear change. Aussie S63s, driving the rear wheels only, take 4.4sec to cover the same increment.

The Audi S8, too, benefits from the grip and traction only four-wheel drive can muster, losing only one tenth to the more powerful but heavier Mercedes to 100km/h. As speeds climb, the smaller 4.0-litre twin-turbo V8 fails to match the Mercedes’ acceleration, but it does manage to slurp 10-15 per cent less fuel than the other two, an on-test 13.4L/100km beating the Benz’s 16.0L/100km and Jaguar’s 15.0L/100km. 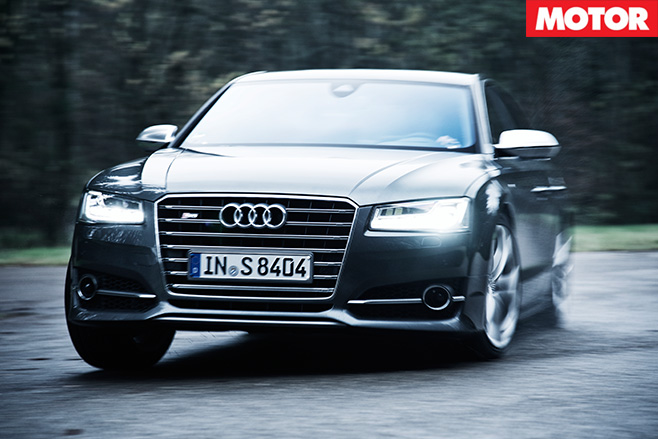 Neatly splitting the Germans in terms of outputs, the Jaguar is also the feline-in-the-middle in terms of acceleration, at least in dry conditions. Despite all contenders being fitted with winter tyres, on slippery surfaces, through tight corners and at every traffic light, both German contenders compete in a league of their own. Tellingly, only the Jaguar struggles on icy on-ramps and snow-covered climbs.

The XJR’s interior ambience is one of modern charm, with cabin accents of polished timber and glossy metal offset with wall-to-wall leather and alcantara and all the usual mod-cons paired with a decent sound system. However, the Brit doesn’t include as much high-tech gadgetry as its challengers from across the pond. Even essentials such as tyre pressure monitoring, adaptive cruise control and blind-spot monitoring cost extra. 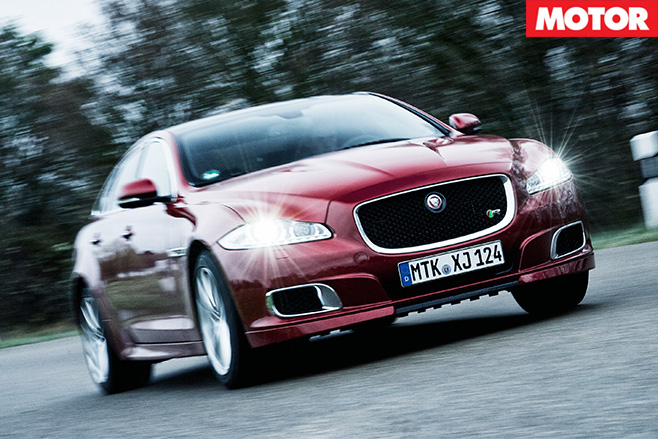 There is no head-up display, no carbon-composite brake option and, perhaps most importantly, no all-wheel drive variant. The seats do a dismal job of supporting occupants and the charmless digital instruments look out of place in such an upmarket environment.

Even though the S8’s interior scores a few points for the best fit and finish, classiest instruments, most tasteful interior and brightest LED headlights, not everything’s perfect. The MMI entertainment system is getting more complex with every round of modifications, access to the extensive Drive Select menu should be more intuitive, and the gear selector often needs two or three attempts to engage and stay in reverse. Further marking it down is the fact that the long-wheelbase version is not available in most markets, so tall back-seat passengers will struggle for space. 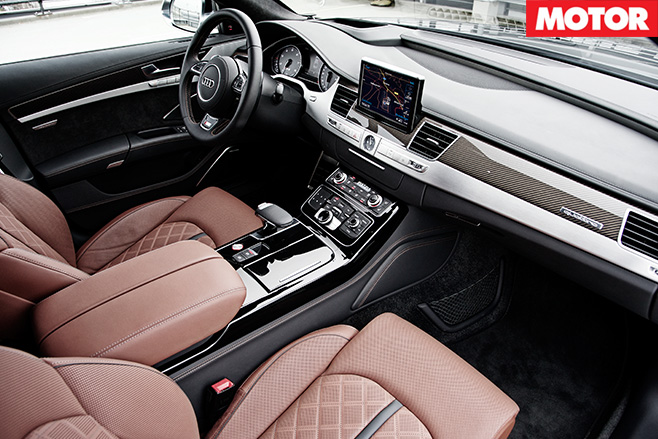 Standard equipment includes 20-inch wheels, air suspension with sports mode, dynamic steering and the sports differential, but you’ll be asked for extra if you want carbon-ceramic brakes, night vision and most of the driver assistance systems.

In contrast to the charming Jag and the business-like Audi, the Mercedes has received the full go-faster treatment as ordered by the marketing department.

The rubber-studded pedals are milled from solid aluminium; the seats boast bespoke leather, stitching, piping and emblems; the stylish body kit should be as good at reducing drag as it is turning heads; the four tailpipes are almost as wide as wombat holes; and to avoid confusion with lesser Benzes there are about two dozen AMG logos scattered throughout the car. 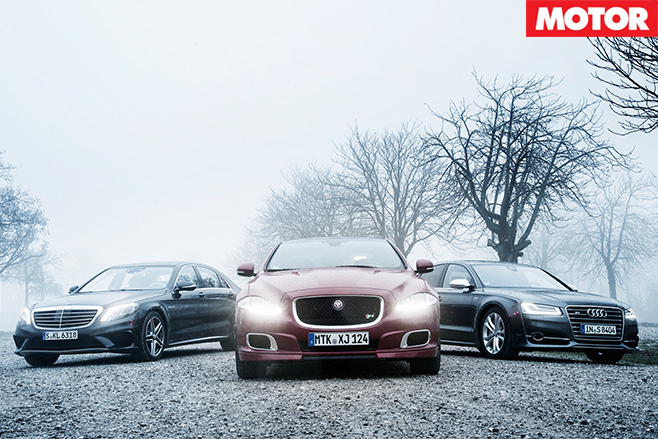 While Australia will miss out on the long-wheelbase and all-wheel drive options, local cars will allow customers to sample Magic Body Control, which uses two cameras to scan the road surface ahead to alert the suspension of bumps and potholes it’s about to encounter. Between the prescient suspension system and the comprehensive sound deadening, the Mercedes gives the term ‘splendid isolation’ new meaning.

But it’s when you put the car to the test by waltzing through a set of curves that a larger-than-expected portion of the promised dynamic sparkle is lost in translation. The driver is constantly tailed by a battalion of electronic helpers assisting in changing lanes, keeping a safe distance, braking in an emergency, pulling at the steering wheel, or parking the car automatically. 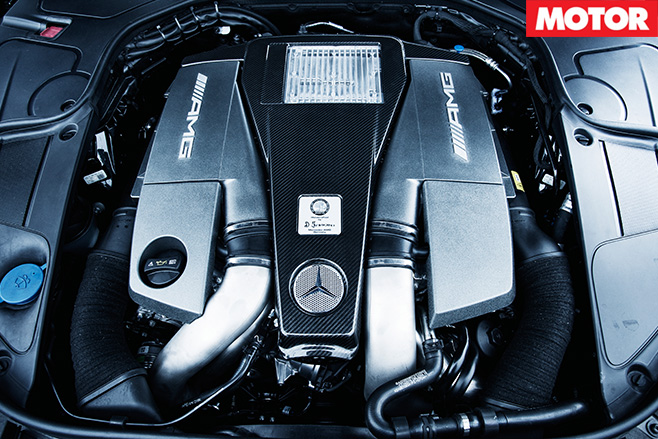 Thankfully, the S63 holds a resilient interest in AMG-inspired goals such as handling and road holding, cornering grip and steering accuracy, brake bite and throttle response. It does, in fact, turn in eagerly, decelerate with vigour, handle with talent, and hug the road with enthusiasm. It’s also a true champion of longitudinal acceleration, and it can be coaxed into feeling quite chuckable for a behemoth weighing 1995kg.

The Jaguar specialises in the very British art of refined part-throttle cruising, but flex your right foot and the XJR will instantly change down a gear or two and charge at the horizon with the explosive energy of Usain Bolt. But then if you decide you want manic from one moment to the next, bury the loud pedal and hold on. 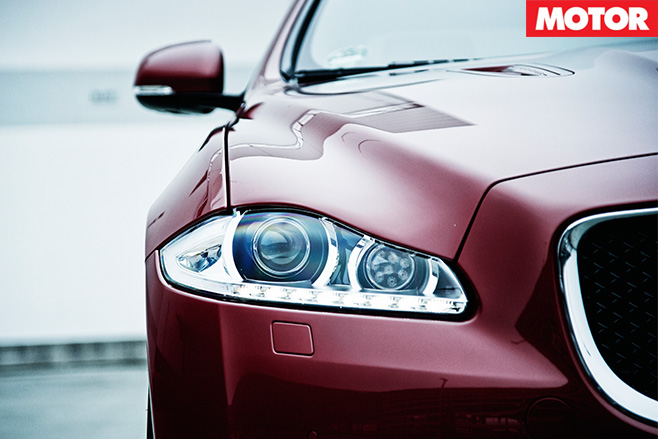 The whine of the supercharger and bellow of its quad exhaust trumpets signify the 19-inch snow tyres struggling to connect with even dry blacktop, as the quick steering develops a new lightness making even this XJR long-wheelbase feel poorly earthed at the limit. Its paddle-operated eight-speed automatic is not all that composed, either.

In sport, it feels more like dual-clutch transmission than an auto, holding on to a given ratio all the way to the redline, then shifting with time-warp efficiency. The brakes bite with unyielding force and roll-on acceleration punches you hard in the guts.

As for the S8, its driving dynamics should be spot-on, and yet in real life they form an odd mix of highs and lows.

Take the handling, which ranges from defensive to indifferent. The steering refuses to feed your palms with enough weight, self-centring action or grip information while the brakes, which are very powerful and totally immune to fade, could do with a more progressive pedal action. Try the air suspension in all three available settings, and you will wonder why not even comfort mode provides a satisfactory level of compliance for a car asking this much. 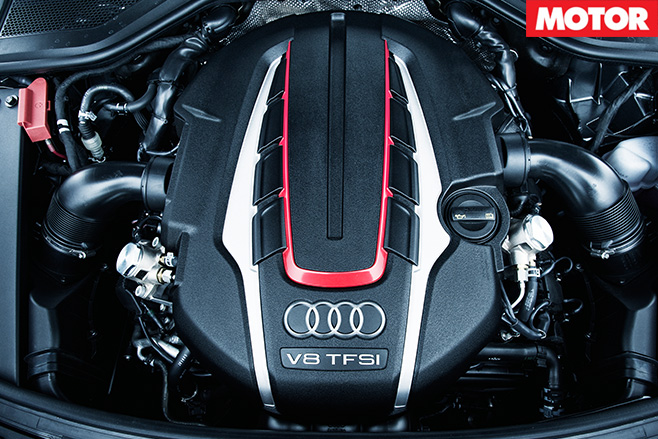 By the end of the 72 hours, we debated long and hard about crowning an outright winner. The sporty high-end Audi has great potential, and if you love the clean Bauhaus style, plus Germanic perfection, then the S8 may be worth a look. But ultimately, the S8 was perceived as a cold technocrat that seems to take particular pride in keeping its helmsman at arm’s length.

On the other hand, the Benz has got what it takes to be the best of all worlds, and yet isn’t. It’s a complete and competent car, but its visual appeal is not enhanced by all those nip ’n’ tuck modifications. And it feels like its true dynamic potential has been smothered by many layers of cotton wool and nanny tech.

Instead, you buy a tonne of kit and a 0.8sec 0-100km/h acceleration advantage over
a cheaper priced in-house alternative like the S550. The S63 just feels like a fast S-Class, and not enough like the raw driving machine its baby brother E63 AMG is, lacking the same effect on your adrenal glands as most other AMG products. 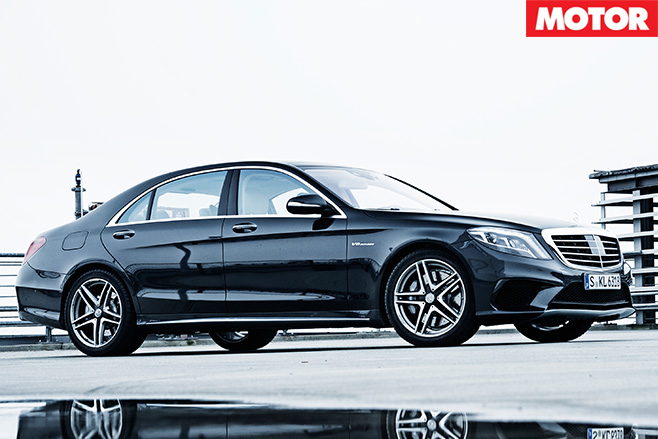 In stark contrast, the XJR first appeals to everyone’s inner hooligan: it can play the image card or do doughnuts until a neighbour calls the cops. But, and there always is with these three, while the Jaguar is a great plaything for the relatively short Saturday morning drive, as an all-weather 24/7 runabout it leaves something to be desired.

It reaches its limit earlier than expected and when it does the XJR finds it more difficult to maintain its balance and hold the road than the S8 or S63 AMG. All of which is another way of saying that the Jaguar is competent and controversial, but flawed in a charming way.

The most accurate conclusion is: in terms of their intended purpose, combining autobahn-slaying speed with ultimate luxury and driver enjoyment, they all fall short. 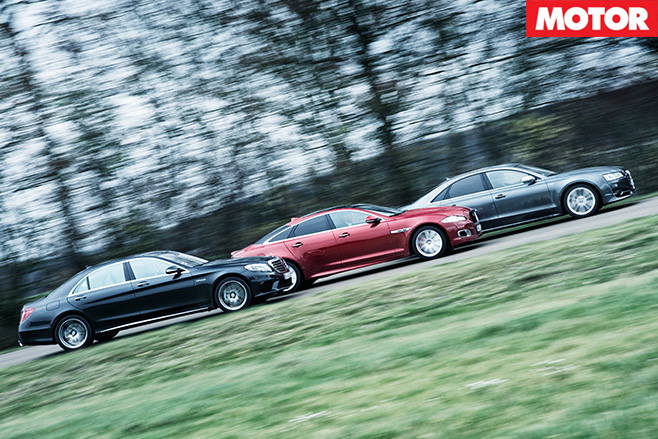 Instead, they illuminate the more conservative offerings in respective model ranges as probably a better place to spend some cash and picking one, if you must, comes down to your personal taste.

The Audi will appeal to those who like to fly under the radar, the Mercedes to the power junkie, and the Jaguar to the executive that likes to indulge in a bit of drifting between board meetings. 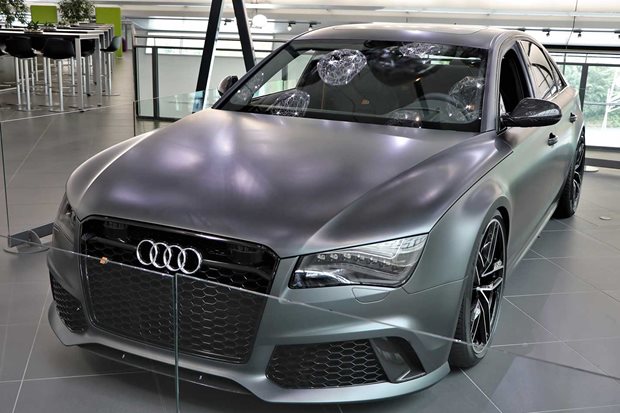 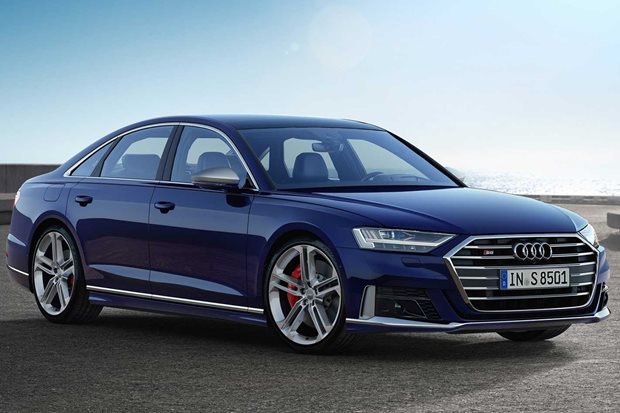 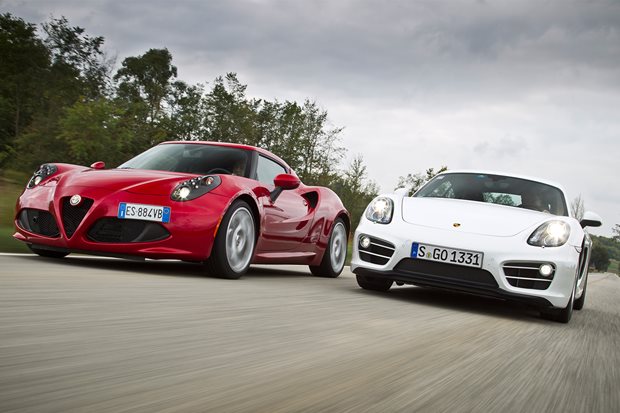 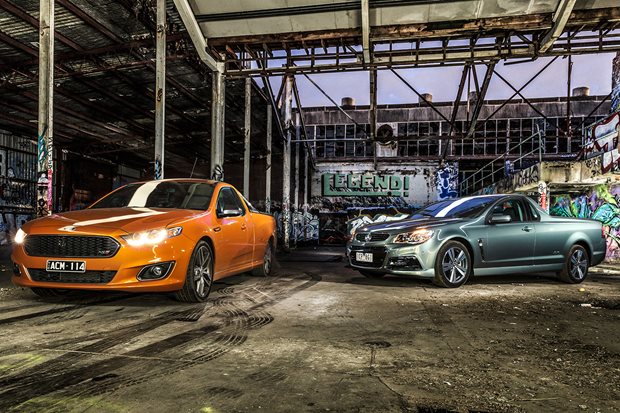