Why have carmakers by and large been so gun shy about creating high-performance versions of small- to medium-sized SUVs?

You can buy anything from stove hot mini hatches to hi-po utes, limos and obscurities like behemoth family-truckster-coupes like BMW’s X6M, and yet the prospect of a properly hardened take on compact soft-roaders – perhaps the fastest growing segment on the planet - has been an open goal that, mystifyingly, nobody has taken a shot at.

Utilitarian school bus and grocery getter weekdays and crackerjack back-road corner carver on the weekends? The ultimate in practical petrolhead mobiles? As no-brainers go, it’s got to be right up there, yes? Finally, someone has done it. And that someone is Audi. It’s called the RSQ3. It’s due out early 2014. And it’s not the car before you…

This here, instead, is the SQ5. The ‘S’ badge signifies its performance aspirations are a little less than ‘high-’, and its near-on two-tonne heft suggests ‘medium’ doesn’t describe the weighbridge ticket. It also can’t be had with a petrol engine.

And yet the new sporty version of Audi Australia’s biggest selling model nails the back of the abovementioned net with such conviction that nothing under $100K boasting luxo-performance aspirations and family-lugging promise comes anywhere near it. Not merely due to lack of competition either, but because it’s oh-so good. The SQ5 presents a string of firsts for the Ingolstadt marque. It’s the first ‘Q’ SUV model to wear a sporting ‘S’ designation. And despite once offering a Q7 with a planet-shifting 1000Nm, it’s Audi’s first ‘S’ model with diesel power.

And it lobs into showroom wearing the title of World’s Fastest Diesel “Production-Ready” SUV – or SUV built off a regular assembly line rather than an aftermarket tuning house – says it maker.

You can debate the last claim in the semantics – it’s actually the world’s SUV. And the number Audi attaches to that is a 0-100km/h sprint in just 5.1sec. Doing the heavy lifting is Audi’s brilliant, highly strung BiTurbo 3.0-litre commonrail V6 that debuted in the (pricier) A6 sedan and A7 five-door a few months back. An engine not to be confused with the bread and butter 3.0 TDI seen elsewhere across Audi’s range and the on-road extrapolation of knowhow garnered from the brand’s six oiler-fuelled Le Mans victories.

Examine the details the you’ll differences in compression (16.8:1 up from 16.0:1), piston/head/inlet port designs, new eight-port piezo fuel injectors, improved volumetric efficiency and other revisions to fuel, oil and cooling systems.

The sequentially turbocharged six certainly produces the numbers, with 230kW between 3900 and 4500rpm and a whopping 650Nm from 1450 through to 2800rpm. But the real brilliance is in the engine’s character – how it feels and sounds – that’s quite revolutionary and certain to transform many oiler-fobes who try it into diesel converts. 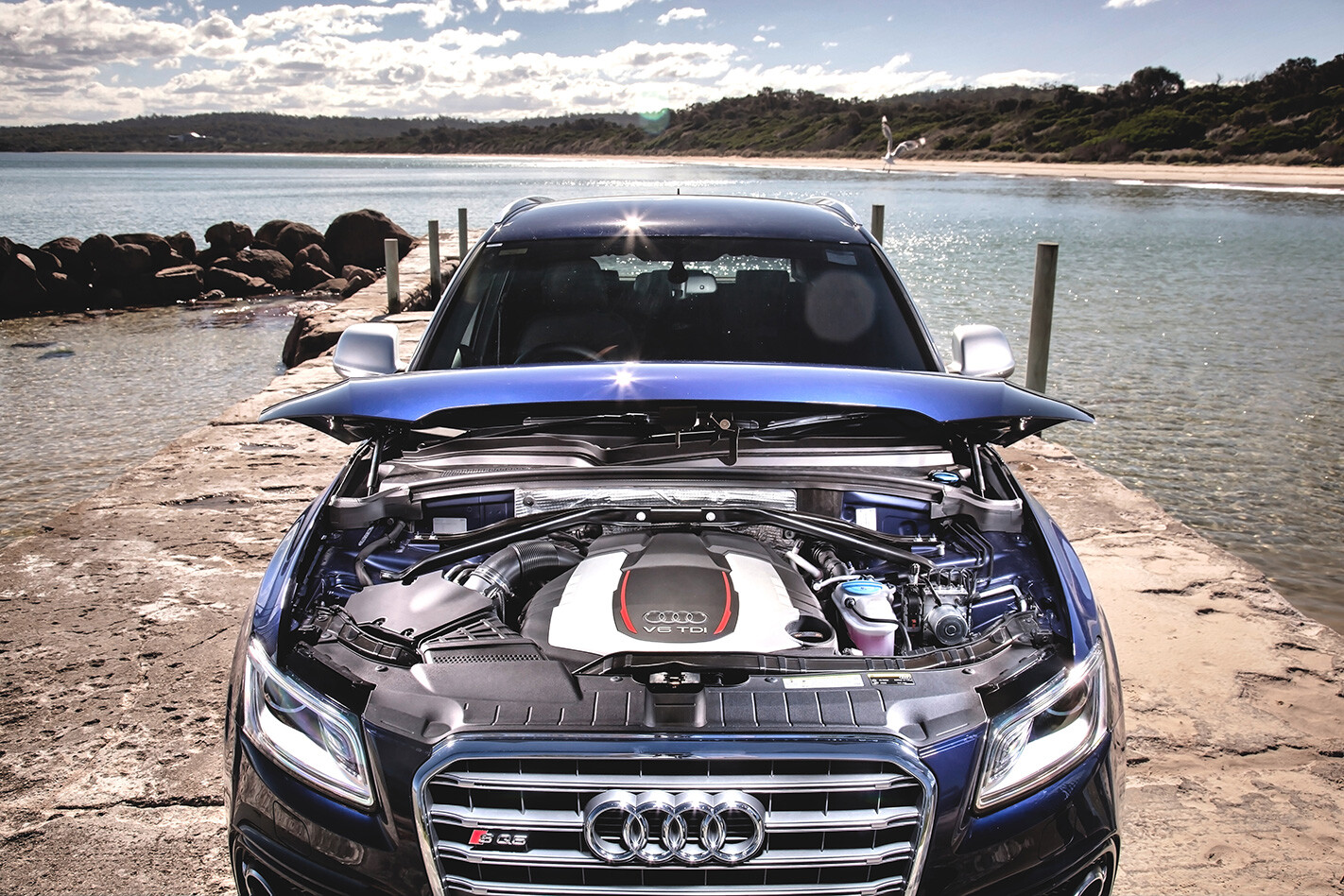 For a start, it revs to 5200rpm! And while it’s not the perkiest near the rev-limiter, that’s still astonishing crank speed for diesel. Even more intoxicating is the exhaust note, a fat roar with V8 like presence and yet a very un-V8-like timbre that’s every bit as satisfying as a some of the better petrol notes, facilitated through a pair of sound actuators mated to twin exhaust system’s dual mufflers.

These actuators are proper hardware, too – not merely electronic-based synthesisers – that enhance and amplify the exhaust note both inside and outside the vehicle. Together, the high engine speed and bold note eradicates the diesel engine’s most unsatisfying traits, which is no small step forward for a diesel keen on gaining performance acceptance and legitimacy. 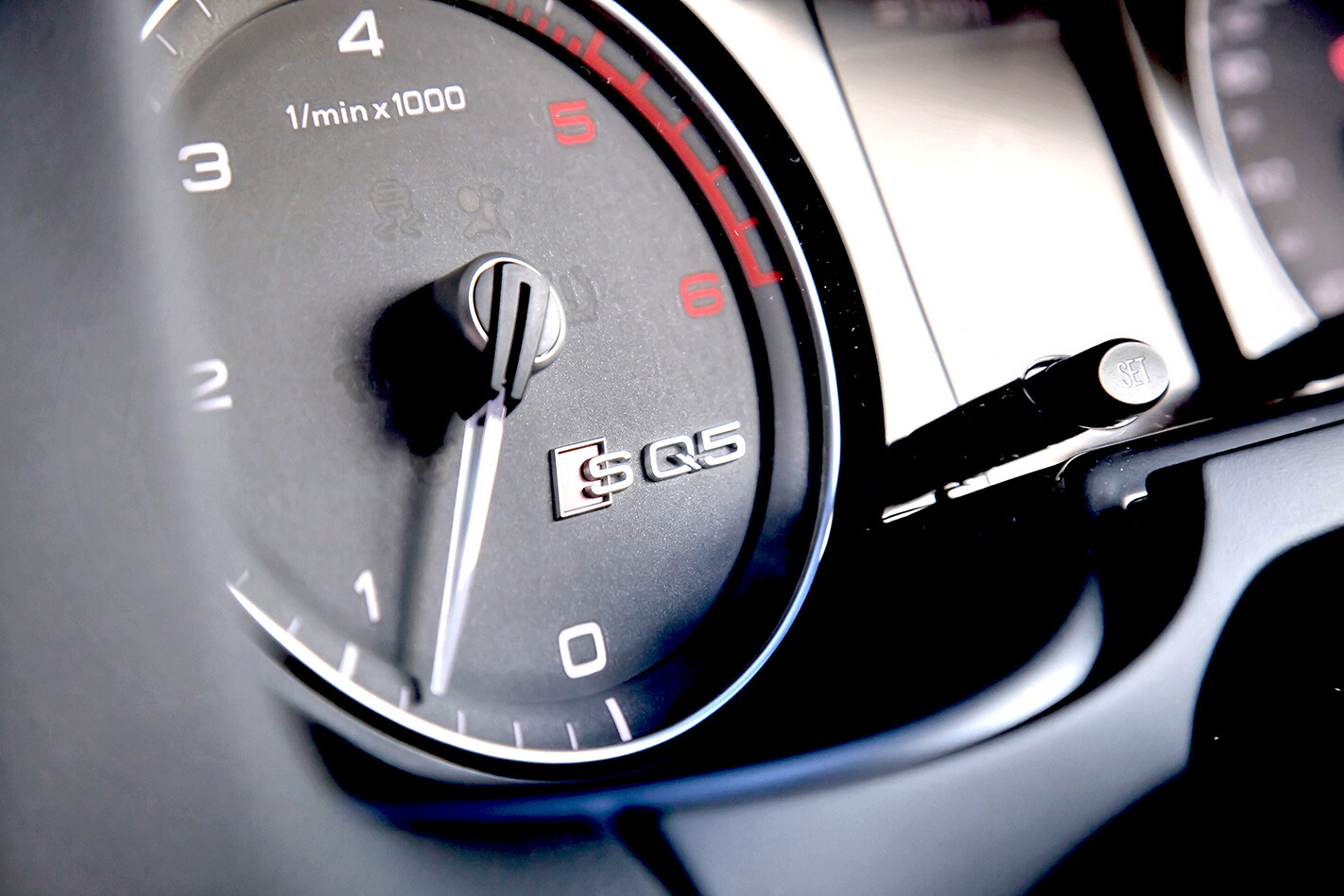 The eight forward ratios allow a short first to facilitate rapid acceleration, close stacking of the middle order ratios to help keep the diesel on the boil at any road speed, and a moon-shot eight speed to allow the SQ5 to return a combined fuel consumption claim of just 6.8 litre per 100 kilometres.

That a two-tonne, full-fruit, 5.1-second-quick prospect – and one that’ll stretch its legs to a 250km/h Vmax – can return such frugality is quite frankly amazing. The sign of very new times.

The auto is beautifully smooth at low speed and the BiTurbo urgently keen to climb the torque curve, and combined their response time to driver input is quicker than many petrol-DSG combos (particularly against VAG’s smaller capacity stuff).

On the move, the auto kicks down crisply and the SQ5 mans the battles stations almost instantaneously regardless of rpm or road speed. Urban crawl, highway cruising or back road punting, it’s a formidably potent powertrain combination. So far, so impressive. 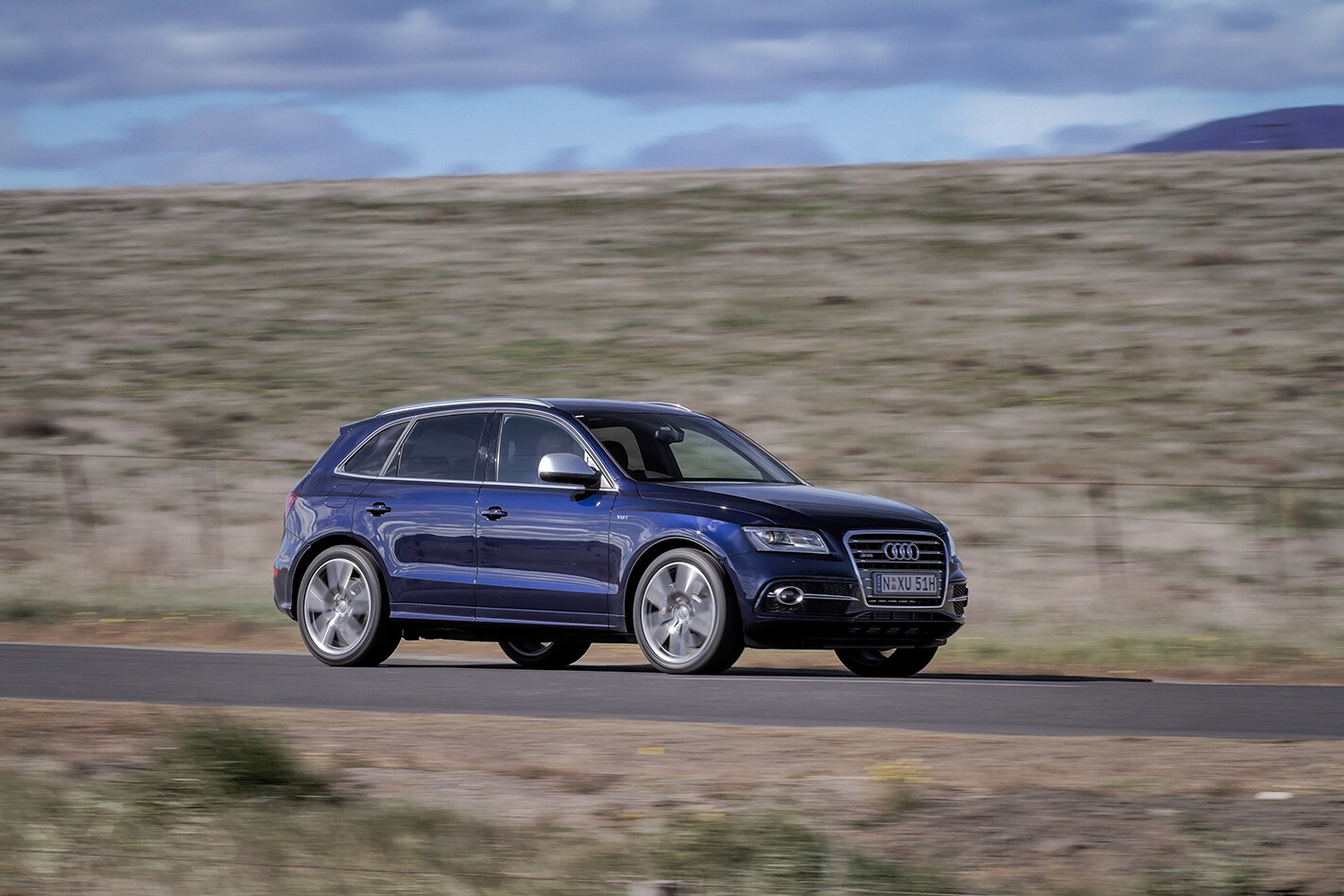 But where the SQ5 really steals the march on any modest sized SUV is how well it harnesses the urge using the rest of dynamic package. The quattro drive system – essential a port of the regular Q5 gear – is as seamless and transparent as you’d expect from the company who created the template for on-road all-wheel drive.

But the ‘S’ hauler adopts wider front and rear tracks, a 30mm lower ride height and firmer spring and damper settings that, unlike the adaptive set-ups in regular Q5s, makes do with essentially one Dynamic Mode setting (Drive Select only effects engine, trans and steering mapping). T

he SQ5 then stakes it claims for sealed road prowess by plying broad 255/45 rubber loaded on 20-inch alloys … unless you foot extra for the optional 21-inch rims and 40-series tyres as fitted to our test car. Brakes are not insignificant 380mm fronts and 330mm rears clamped with oversized two-pot calipers all round. 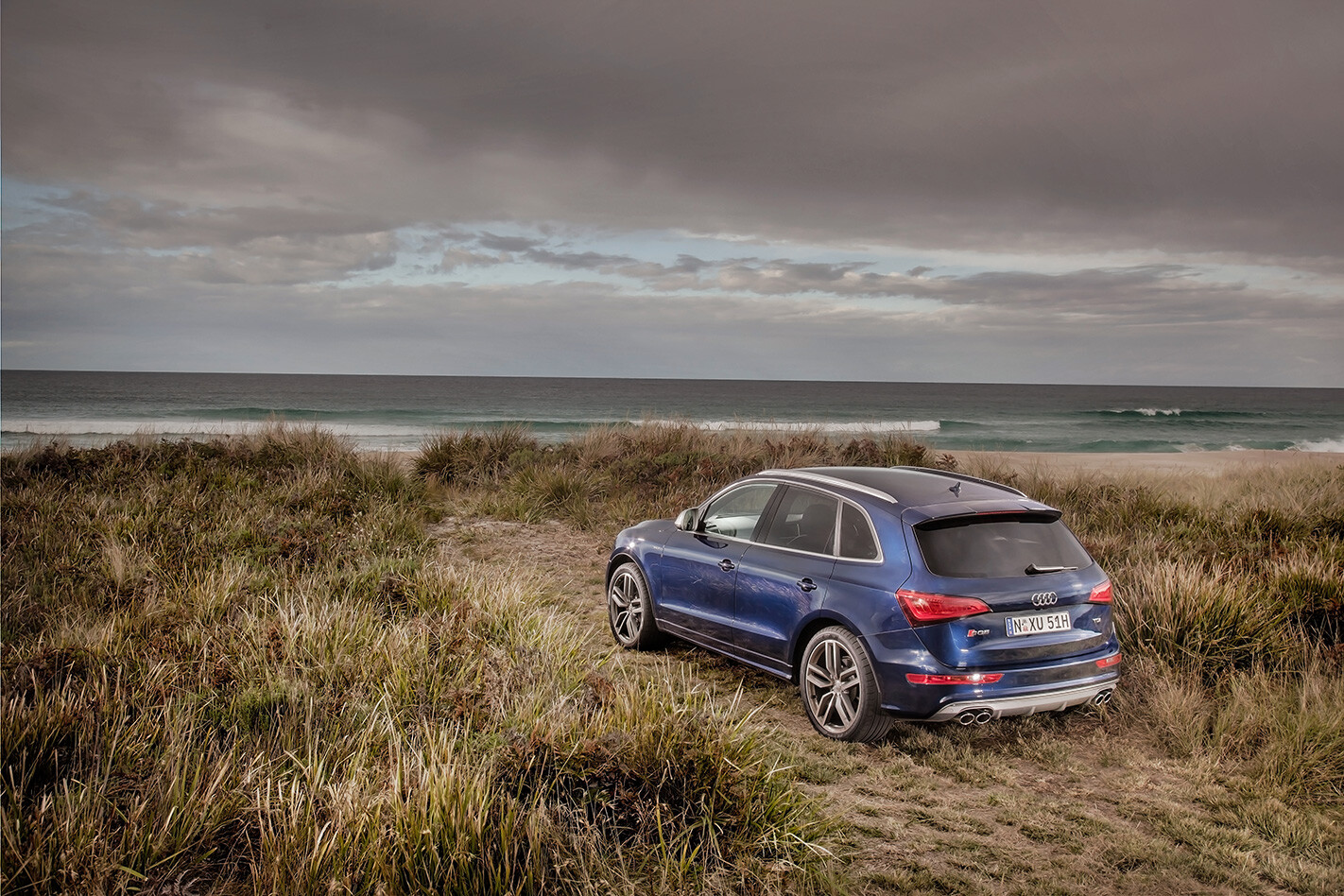 Let’s be honest – you’re not going to make RS owners lose any sleep when curves come into the equation. But the SQ5 feels as quick through a set of twisties as many sporting or muscle cars out there for the same money and will leave most devices fit for 2.4 kids and the pooch, in any price range, well in its wake.

The handling package goes a very long way in imbuing bona-fide agility – or at least as much agility as two-tonnes of glass, metal and rubber mass allows. There’s a proper edge to how the chassis connects with the corners below and the road-holding grip is properly robust.

It sits flat and surefooted in the mid-corner, with much less body roll and none of the malaise-like vagueness that’s usually par for the SUV course. It’s a good communicator. 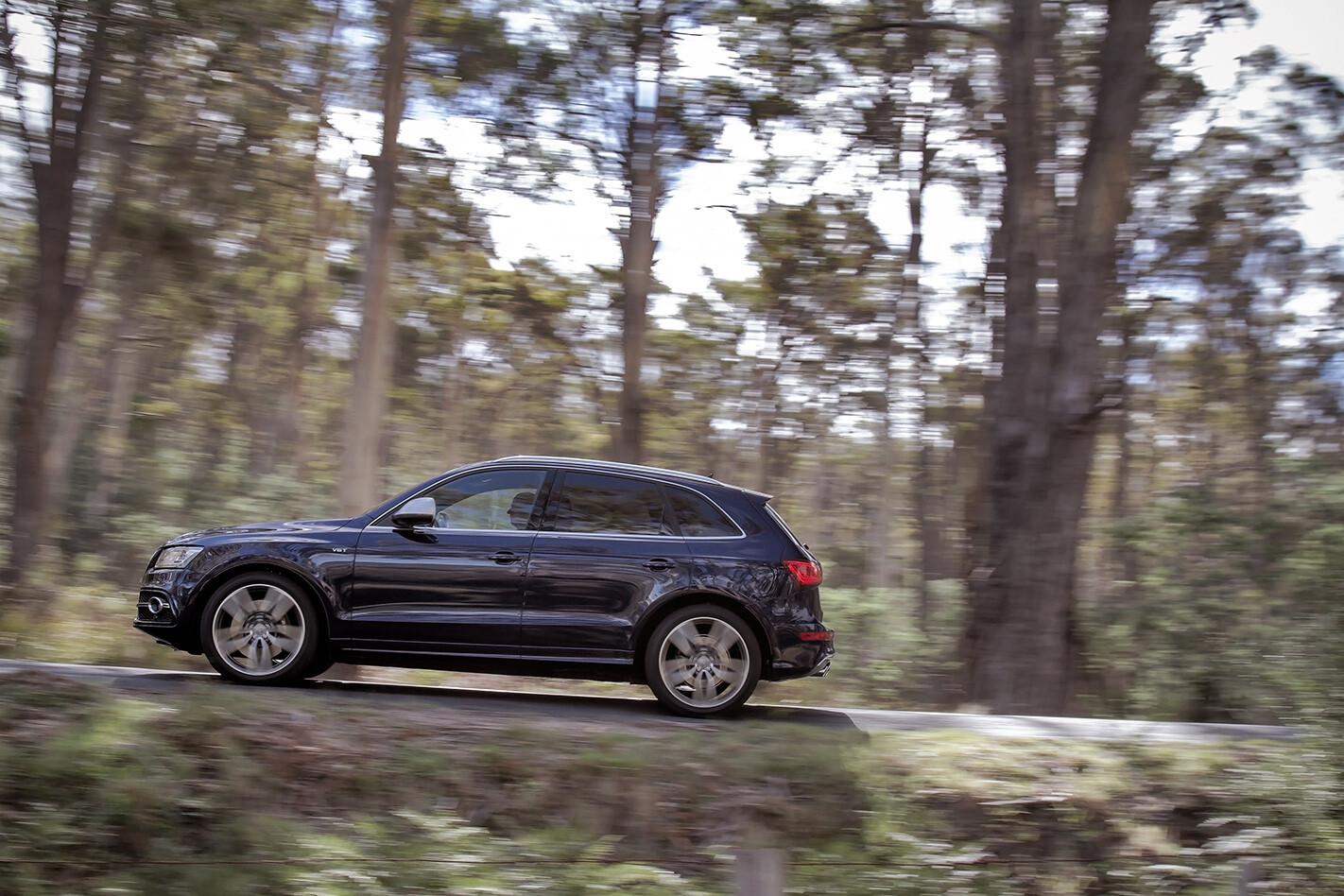 You can throw into corners with such eagerness, and it responses with such safe predictability and genuine gusto, that it encourages you rethink how hard you can throw much mass through a bend. And given Audi Oz chose to launch the SQ5 across roads adopted for some of Targa Tasmania’s finest stages, it’ll eat up the most challenges bends at that.

The jury is out, though, on the cost optional electromechancial Dynamic Steering system. It can vary the ratio between loosely comfortable 1:16 and sportingly quick 1:14, using either linear or non-linear (variable) programmes, depending on how you set it using Drive Select.

Sounds complicated and unnecessary, right? Perhaps. By it works so transparently that you don’t really notice it’s there quietly doing whatever clever-dickery it does. A similar system is fitted to the current RS4 Avant where, perhaps due to its relatively more hard-core nature, the system’s adjustments are more evident. And annoying. But that’s the beauty of the SQ5. As wonderfully muscular and potent its character may be, it’s not really pretending to be anything other than an SUV. Which works very much as a strength rather than a weakness.

Take ride comfort. You’d expect the trade-off of the grip provided by those huge licorice hoops to come in the form of harshness and brittle ride quality. There’s nothing of the sort.

The SQ5’s balance of ride and handling is extemporary – a real eye-opener. And while bit of added tyre roar is expected, the SQ5’s default setting in most driving condition is very much one of quiet, polished comfort and hassle-free A-to-B transit. It’s case of oodles of performance and comfort, rather than approaching either – or both – simply half-cocked or half-hearted. That extends to the styling. Outside, the front and rear ends get a massage, the side skirts are remodelled, xenon headlights come standard, the exhaust system gets four elliptical tailpipes and the brushed alloy fairy has cast her spell here and there. Nothing extravagant and together they conspire to simple and subtly more purposeful effect.

Inside, again, it more about a lift in the details than about big, broad stroke cheesiness. The flat-bottomed tiller and the ‘S’ sport seats and transmission selector knob are the only obvious concessions to sportiness, though necessary ones at that.

The rest of the changes are down to range-topping nicties such as Pearl Nappa and Alacantara trim, raised ‘3D’ instrumentation, high-spec infotainment/nav and a 10-speaker, 180-watt audio system is in for the bargain. 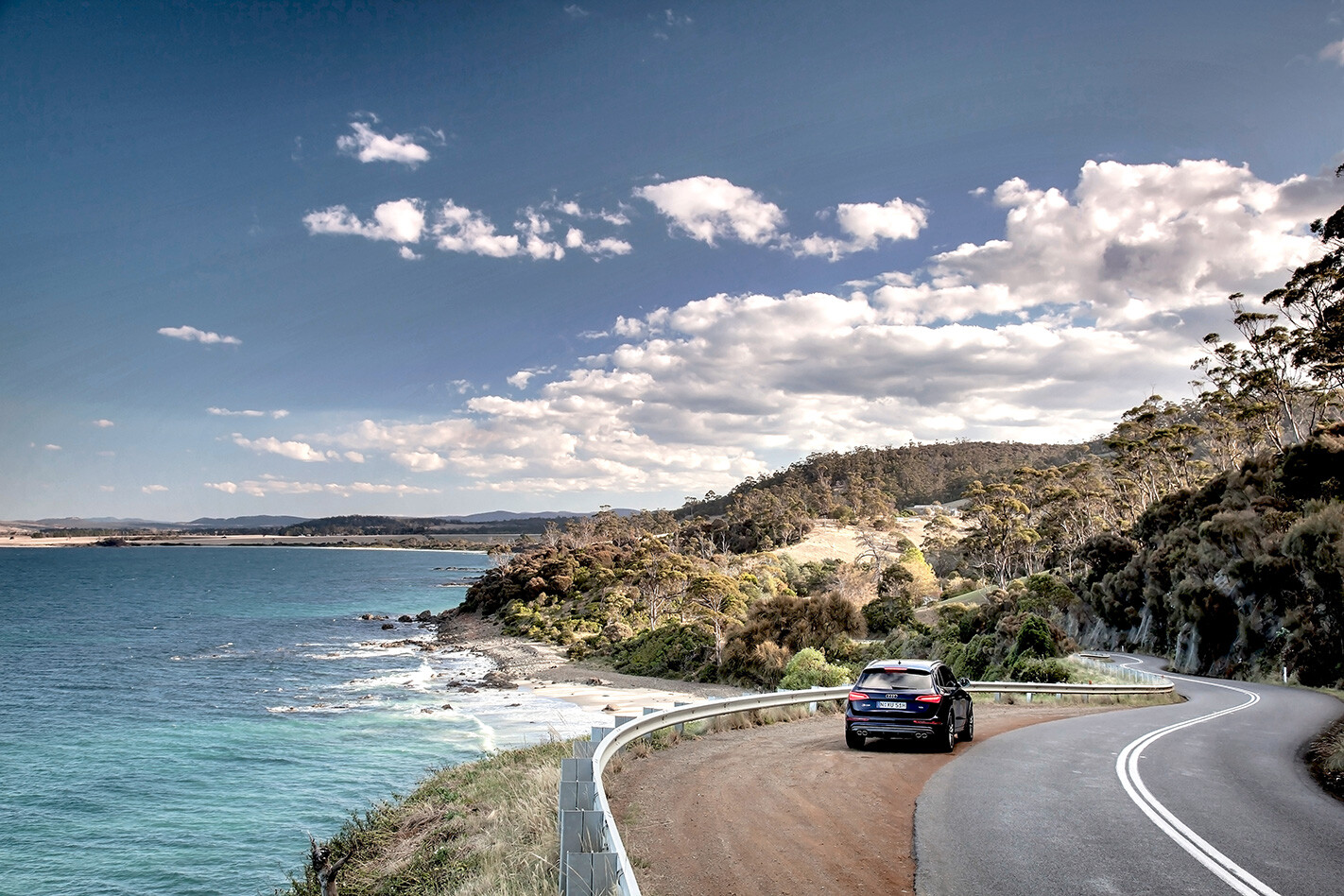 Nor is the SQ5 robbed of any utilitarianisms that have compromised quite a few of Audi’s RS models past and present (ever tried shoehorning a toddler past the race buckets in an RS5…?).

Like other Q5s, the second row seating has 100mm of fore-aft adjustment (even when it’s split 60/40), there’s still a full 540 litres of cargo area (seats up), the electric tailgate can be programmed for height adjustment, the ESP system has different modes calibrated for both on and off-road and, while we’re getting dirty, hill descent control is standard fitment. The first 60 SQ5s to hit the Aussie landscape are called Launch Editions and get a host of goodies in for the deal including the 21s, Dynamic Steering, B&O audio, adaptive headlights, special Carbon Atlas trim and heated seating, just name a few on a long list of gear. This bumps the price up to $104,120. And all of them are sold.

Regardless, the base SQ5 on 21s (which adds $3600), for a total ask of $93K neat, would be our choice. But that said, if you’re after a proper performance SUV for anything like normal money, there only is one choice right now.

And continues to look that way, at least, until the smaller, faster RSQ3 arrives.