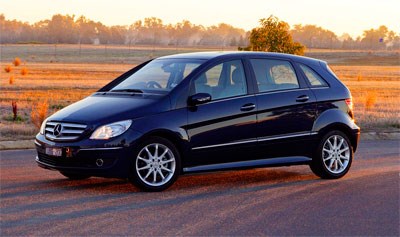 Roomy, boomy and not real zoomy.

In deference to Australia's shrinking economy, the Bulmers have taken the responsible step of downsizing. We believe it's the least we can do in these troubled times.


Having ballooned out of the mid-size C-Class Estate and into the imposing CX-9 for last month's holiday-road-trip-from-hell, we felt it only right to suck in the gut, notch up the belt and don the sackcloth for a period of carbon-crediting abstinence.

At least that's what I thought we were in for when I learned our new short-termer would be a diesel-powered Mercedes B-Class.

I admit to not knowing a lot about the B-Class prior to this test, other than the fact it sits neatly between the diminutive A-Class and the sensible C-Class in Benz's size and price hierarchy. That, and the fact it has never, to the best of my knowledge, tripped over a moose.

Having now spent a month or so at the wheel of a B180 CDI, I have a newfound respect for the packaging abilities of Merc's engineers and designers. Despite the B's fairly compact exterior dimensions, it boasts a surprisingly roomy interior that seats four adults in comfort and gives away little in the way of useable space to the larger C-Class.

Unfortunately, the engineers appear to have been so preoccupied with creating clever interior solutions, that they neglected dynamics and performance. In my view, neither are of a standard that you might reasonably expect from a car costing $45,800 (or $54,860 as is the case with this optioned version).

The problems start with the steering, which is nervous and lacking in feedback. As a result, you're never really comfortable or fully engaged with the handling. Add to this the leisurely acceleration and soft throttle-response of its 2.0-litre turbo-diesel, plus a droning CVT soundtrack, and it's a mediocre drive.

For some people the B's safety, efficiency and packaging benefits will make a compelling enough case. But others, like me, will know that Mercedes-Benz can, and should have done a better job on the drive side.

Date acquired: March 2009
Kilometres this month: 548km
Total kilometres: 548km
Av. fuel consumption: 8.3L/100km
Maintenance: nil
Our loaner's impending 10,000km service coincided with an out-of-town launch, so we decided to sample Merc's Airport Express dealership. We dropped off the B180, were ferried to the check-in and, upon return, were collected in the serviced and shone B180. Nice one, Wolfgang! 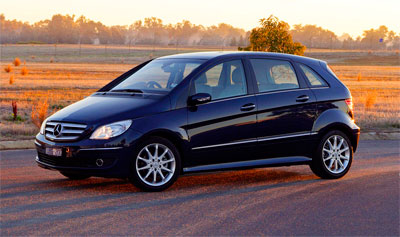 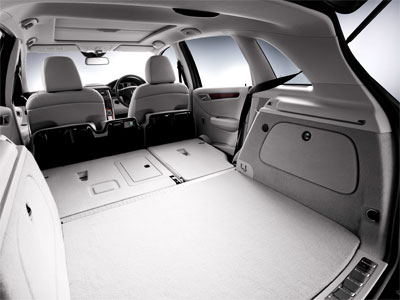