SMALL in stature and sporting similarly diminutive price tags, it’s easy to overlook the talents of vehicles in the microcar segment, but delivering a distilled version a manufacturer’s brand values on a tiny budget is a deceptively tough assignment.

Viewing these cars as low-involvement buying decisions for first-time drivers, pensioners and other lower-income types who are too timid to buy second-hand ignores the fact that the latest crop of microcars are good enough in their own right not to damn with any sort of faint praise.

That said, the Aussie love affair with the microcar has been a relatively slow burn, and many buyers will still be tempted to skip to the light car segment above where engines, interiors and cargo spaces are more generous, for an outlay of just a few thousand extra. But change is in the air. Last year Kia’s Picanto launched into Australia with an opening salvo that buyers found hard to ignore. The combination of an aggressive driveaway price point and a seven-year warranty was enough for some. The Picanto backed that up with a generously stuffed equipment list borrowed from the strategy that had proven so successful for the Holden Spark, the segment’s local hero. Holden’s nuanced insight into small car buyer behaviour here in Australia was coupled with the homefield advantage of domestic market suspension tuning. That was enough to get the Spark across the line first in Wheels' compact car comparo of 2016.

Now in 2017, it's time to revisit the micro segment, the lineal champ from the red corner facing a sterner test this time. The Picanto is back in new-gen form with more mature styling, even more equipment and a $14,190 retail sticker for the base manual that's just $200 more than the Spark LS manual. What’s more, the Kia spikes the Spark’s guns with a locally-developed ride and handling tune. Completing the trio is Suzuki’s fresh-faced but big-boned Ignis.

Yes, we know the Ignis is officially classed as a tiny SUV, but would you ever realistically regard it in the same way you would a Mazda CX-3 or Toyota C-HR? We're going against the ideological grain here and declaring the exclusively front-drive Ignis to be nothing more than a micro hatch with an altitude adjustment. Its $15,990 drive-away price tag puts it in the micro car zone anyhow, though it's at a modest price disadvantage relative to the Holden and the Kia, so it’ll need to work that bit harder to impress here. 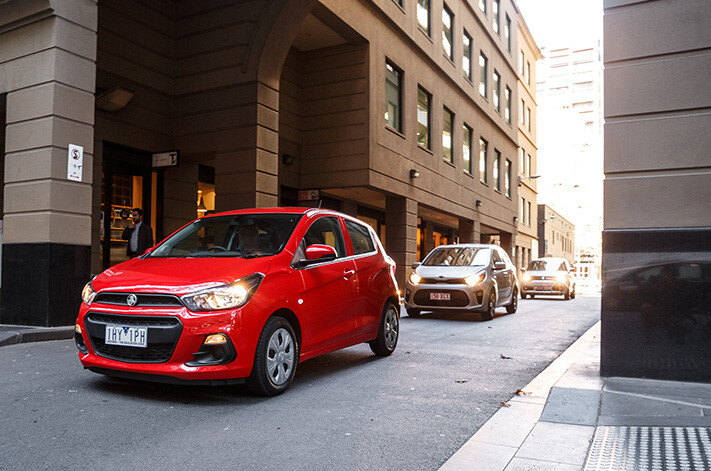 It creates a decent first impression with integrated satellite-navigation and a leather-bound steering wheel that elevates the interior ambience somewhat, while the Kia and Holden make do with smartphone mirroring via Apple CarPlay/Android Auto and clammy urethane steering wheels.

The Spark LS manual tested here retails for $13,990, making it the price leader of this set. The Picanto S manual wears a recommended retail of $14,190, though it balances that with the most generous equipment list here.

The introductions complete, let’s take a closer look at how each of 2017’s micro car contenders shapes up.

Straight away, the Ignis gets your attention with its boxy shape and funky interior. It’s a great example of how deliberately retro throwbacks can look cool rather than cringeworthy - the Ignis has plenty of visual attitude, and that goes a long way in the showroom. It doesn’t hurt to have a design with personality, demonstrating that even at this price point, it’s possible to offer something other than lowest common denominator fare.

Firmly in the Ignis’ favour is its roomy interior, with stacks of headroom, the most rear legroom and the biggest boot of this bunch. On the opposite side of the ledger is a lack of height adjustment for the driver’s seat, and ironing-board-flat rear seatbacks. At least it’s easy to get into and out of, thanks to wide-opening doors, a high hip-point and generous floor-to-ceiling height.

Its powertrain is perky too. Displacing just 1.2 naturally-aspirated litres, the Ignis’ four-pot has a punch that feels more powerful than its 66kW/120Nm would suggest. It loves to rev and delivers power in a delightfully linear fashion.  You’re looking at the vehicular definition of “cheap and cheerful” right here. 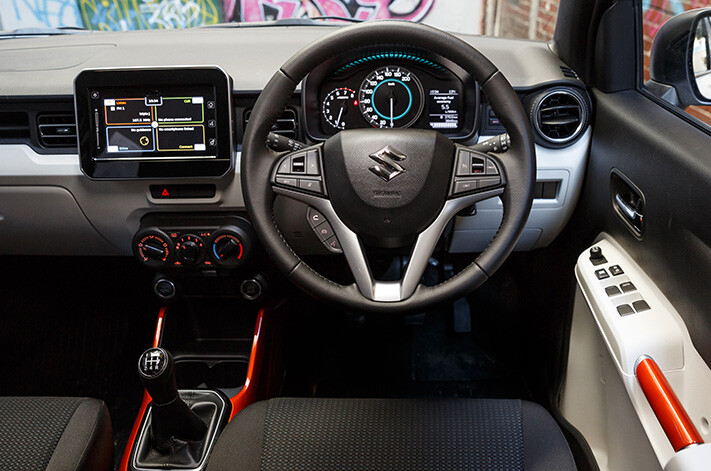 It’s also the lightest car here by nearly 180kg, and that translates into keener step-off and respectable fuel economy of 6.4L/100km.

However the Ignis is the only car in this throwdown that doesn’t benefit from a locally-developed tune, and, frankly, it shows. There’s a surprisingly brittle ride for something with so much ground clearance, the chunky Suzi’s suspension being firm and never settled on lumpy roads. The Ignis’ steering also fails to impress. With 3.6 turns lock-to-lock – roughly a full turn more than the others – the Ignis requires huge amounts of arm-twirling when negotiating a tight car park or city alley. More concerning is the variable rack ratio that never inspires confidence, making the car feel nervy midway through a corner and requiring lock to be wound back. Dismal stopping power relative to the other two cars sees the Ignis record the longest braking distance in a panic stop – 44 metres, 1.6 more than the Spark and fully 3.1 metres more than the Picanto. Not great.

2016’s bantamweight champ still makes a strong case for itself in the pricing and driveability stakes, though it’s easily the most conservative car here in terms of aesthetics. It’s functional but definitely not funky. With the biggest engine here, the Spark’s 73kW/124Nm 1.4-litre is a relaxed performer that pips the Picanto in a drag race – though it’s saddled with an irksome torque glitch around 3500rpm. The Spark’s five-speed ’box is the best of the bunch, with a satisfyingly precise shift and an easily-modulated hydraulically-actuated clutch.

The Holden’s steering feels well-oiled and accurate, reassuringly well-weighted and helped by a suspension calibration that promotes stability and safety. Overall, it’s the Spark that’s the best-handling of the gang as well as the comfiest over most roads. 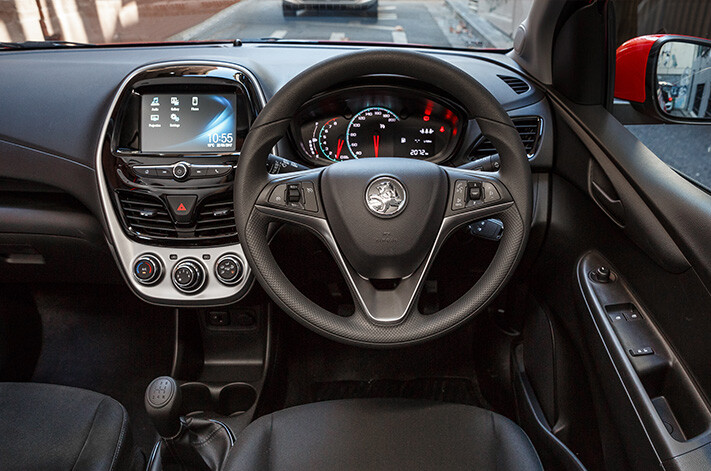 It’s evidence of how fast this sector is progressing that a car we lauded just last year as boasting a strong spec sheet now appears to shoot itself in the foot with some notable omissions, with manual rear windows instead of powered glass like the Suzuki and Kia, acres of clattery black plastic and no rear parking sensors like the other two cars. At least a reversing camera and cruise control are standard features, though these refinements do nothing to differentiate it from its rivals here.

The Holden also clearly prioritises its front seat occupants, with those in the cheap rear seats having to put up with a firm and upright backrest, limited storage and some unimpressive material finishes. Road noise is also prominent in the Holden’s back seat – far more so than the Ignis and Picanto. The Spark may be the cheapest here, but it’s clear that Holden’s attempt to seduce buyers only went as far as the decision makers up front. 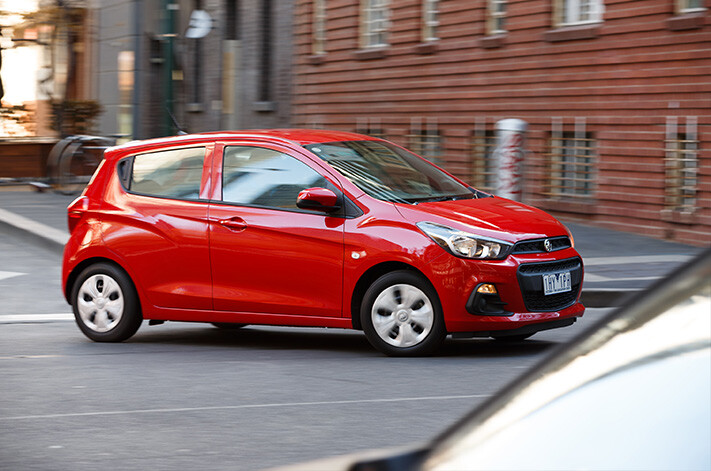 The Picanto is the freshest product here, and that’s reflected in the modernity of its European-influenced design - under the aegis of Peter Schreyer in Kia’s Frankfurt studio - and equipment fit-out. When it comes to feature count, the Ignis only betters it with a built-in sat-nav infotainment system. Kit list for kit list, the Kia forges ahead in almost every area. Behind the wheel the Picanto ticks pretty much every box that needs to be ticked. Its electrically-assisted steering is light yet precise (unlike the Ignis’ bipolar rack), it feels stable and secure at highway speeds and it corners with surprising tenacity. It’s worth noting that the Picanto is alone in this group in offering brake-vectoring technology to help it tuck into turns better.

With a calm highway ride and supple damping that successfully deals with some of Australia’s worst road surfaces, the Picanto’s Aus-specific chassis tune works a charm. Remember, the Picanto suffered last year due to a sub-par suspension – this year’s car has no such handicap. A spongy clutch pedal feel is probably the only mechanical lowlight of the Picanto, with its cable-actuated clutch not transmitting enough feedback to your foot about where the bite point actually is. It’s something you’ll get used to in time, but on a ten minute test drive it could easily deter potential buyers.

Clutch action aside, the Picanto’s on-road competence is matched by an interior that’s unerringly sensible in its layout and refreshingly modern in its design. It trades the cloying cutesiness of the last-gen Picanto for a more mature treatment, with a raised infotainment touchscreen that would look borderline premium if it weren’t constructed entirely from rock-hard plastics. Even so, Kia goes the extra mile by adding contrasting silver trim on the front and rear door cards to bring some brightness into the cabin, unlike the despondently muted palette of the Spark. Kia has clearly invested some time and budget in passenger comfort, front and rear. A reclined rear seat backrest means those riding pillion won’t feel like they’re sitting to attention and Kia has taken a pragmatic approach to dividing up space between luggage and passengers in the one-box shell. There’s more than enough leg, elbow and headroom for a pair of adults to get comfy, and no shortage of seat travel, though just as with the other two cars on test, the Picanto’s steering column will only adjust for rake, not reach.

The Picanto may have missed out on a medal last year, but 2017 is its time to shine. Being a fresh-out-of-the-box design obviously helps massively, but that counts for nought if the product isn’t up to snuff. In the Kia’s case, it excels.

It’s the best-balanced car of the three in terms of price, features, comfort and driveability, and while the Spark kept up or even edged ahead in dynamic testing, it was the Picanto’s more welcoming and hushed cabin that always saw its fob vanish first from the key drawer. The funky Ignis boasts a more flamboyant personality that will no doubt attract those buyers looking to create a more extrovert statement, but Suzuki’s ride and handling team apparently weren’t as focused as the stylists. If Suzuki saw fit to gift the Ignis with a suspension set up better attuned to local conditions and could take a second look at the steering, the Ignis would come close to living up to its initial promise.

We should note that no cars were equipped with autonomous emergency braking (AEB) as standard. If there's one criticism that could be levelled at the micro car segment, it's that this fearsomely price-sensitive end of the market isn't adopting cutting-edge safety tech with the same speed as bigger cars. That’ll no doubt change as unit costs come down and market resistance to cars without this tech firms up.

Kia promises AEB is coming for the Picanto, which will make it the first micro hatch to feature it since Volkswagen’s short-lived Up – and also increase its lead in the micro car stakes. For now though, even without the help of AEB, the Picanto does more than enough to earn its spurs as the best of this bargain bunch.